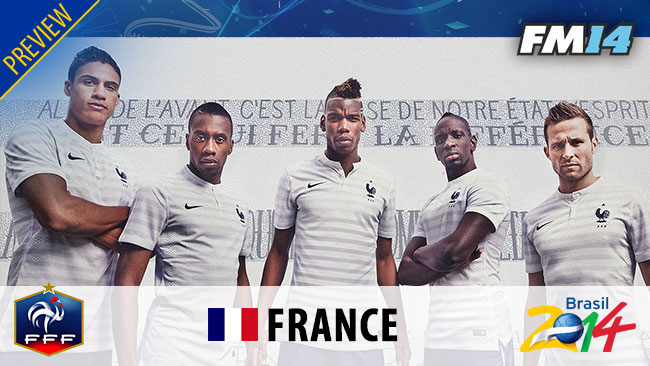 France, a national team blessed with plenty of ability over the years and in the current generation too. The likes of Zidane, Platini and Henry have dominated the international stage in the past and now it’s the turn of Benzema, Pogba and Varane to lead Les Bleus to glory.

France have been drawn in Group B and will feel confident of escaping from a group that includes Switzerland, Ecuador and Honduras. With a squad that is most definitely packed full of talent, the only thing that may prevent success in Brazil this summer is their constant lapses in concentration, which have impeded them in big games. Not to mention maintain a harmonious team spirit in what is an often fractious group of players. If they can eradicate this then they could go on a good run in the tournament.

The France national team has experienced much of its success during three major "golden generations", in the 1950s, 1980s, and late 1990s/early 2000s respectively, which resulted in numerous major honours. They won two European Championships in 1984 and 2000 as well as the World Cup itself in 1998 while hosting it. They could have won the famous World Cup trophy again but eventually missed out on penalties to Italy in the final, with legend Zinedine Zidane’s infamous head-butt stealing most of the headlines.

Every top national team needs to have a solid foundation but with France they have an excellent base to their team with Tottenham goalkeeperHugo Lloris between the sticks. Lloris is not only a fantastic shot stopper and reflexes, but he is the perfect example of a modern ‘sweeper keeper’ with his ability to rush from his 6 yard box and deal with any danger. Hugo Lloris will need to hit his best quickly if France are to go on and do well in this competition.

Real Madrid’s forward Karim Benzema is another player who will be key to any French success in Brazil, with the 25 year old expected to lead the line and will have to provide the goals needed to win games. Oliver Giroud will be biting at his heels if Benzema fails to find the net quickly but with his clinical nature and good form recently, many France fans are banking on a successful World Cup for Benzema. It will be interesting to see if he can live up to this expectation.

Along with a good backbone to the side, a prolific goalscorer, France will need to have a complete midfield player if they are going to have a good opportunity of success in the upcoming World Cup, and they have the perfect player in Juventus’ Paul Pogba. Pogba may still be young at just 21 years old but he has class oozing from him, and his all action displays being a feature when playing. Even if Pogba fails to impress in this World Cup he will most certainly be a vital part of future plans for France.

In a World Cup where many top players will be on show, it also gives younger players the opportunity to shine on the top stage of international football. For France one most definitely to keep an eye on is highly rated Real Madrid central defender Raphael Varane. Not only is Varane a very competent all round defender with his heading, tackling and positioning ability but he is also quick, strong and physically very capable. If France do progress far Varane will be up against some top attackers so it is a great chance to prove himself not just to the manager and France fans but to the world.

Another player to watch is Real Sociedad winger Antoine Griezmann. Griezmann is a bit of a surprise inclusion in the squad, earning a spot ahead of Manchester City star Samir Nasri. Nonetheless, Griezmann has had a very impressive season and will be looking to have an impressive World Cup to add to this. At just 23 he still has plenty of time to fine tune his abilities but his ball control, quick acceleration, and dribbling should make him a threat. Interest has already been high for him at club level and if he turns in a few eye catching displays for France he could be heading to a new club this summer too.

Leading his home country to Brazil is 45 year old Didier Deschamps. As a player he was hugely successful winning numerous titles at the likes of Juventus and Marseille. As a manager now, he will be looking to carry his winning mentality into the World Cup and achieve success with France. Deschamps is a very determined character and will be expecting nothing less than maximum effort from his players in Brazil.

Players ruled out due to injury

In terms of players out of the World Cup for France there is one massive miss, Franck Ribery. In the last couple of seasons, Ribery has hit top form for club and country meaning he was his nation’s key player going into the tournament. He was in fact picked for the squad too before unfortunately sustaining an injury. He is a fantastic player and is experienced as well making his injury even more of a blow. Other players missing include Clement Grenier and Steve Mandanda but thankfully these players are not as important, with other players in the squad easily capable of taking their place with both of them not starters anyway.

In terms of the media prediction, it is widely agreed that they will progress from their group easily and in fact are at 25-1 with the bookies to win the competition, but realistically are not many people’s favourites.

In my opinion, France will easily progress through the group stage but when facing good opposition will fail to win and be knocked out of the competition. At which stage this will happen I don’t know but I believe it is most likely they will be eliminated in the quarter final, at most the semi-final. They may have very talented players within their squad but as a team, France haven’t been seeming to gel and work well together on the international stage. Many people will remember, France’s atrocious World Cup performances in 2010 and this is a main factor in my prediction.