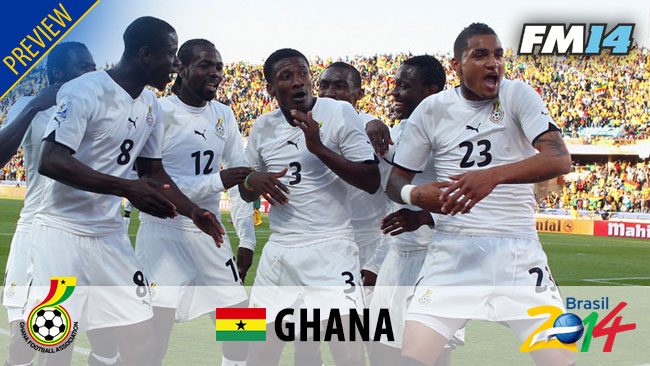 The Black Stars have been the most successful African nation in world football in major competitions. Last World Cup, they got to the quarter-finals before unluckily losing to Uruguay on penalties. Their attacking personal are very talented, and have a strong core. A mix of experienced players from the last World Cup such as Michael Essien and Sully Muntari and younger stars such as Andre Ayew. Their midfield is their strongest area and any side will find too hard to break through it. They should definitely not be ruled out of their group, despite many pitting it as the ‘Group of Death’, and are very capable of beating the big teams when they are on form.

Ghana are one of the newest countries on the world stage, having only qualified for the three most recent World Cup’s, including Brazil 2014. After being the only African team to get past the group stages in 2006, they were hailed by many onlookers, especially after they saw they had the lowest average age of any team in the competition. In 2010, they went one better, reaching the quarter finals before a controversial Luis Suarez moment denied them the victory against Uruguay. They have both the skill and experience at club level, however, for many of their squad, this will be their first major world competition, so it is crucial they manage their nerves as they hope to out-do their previous runs in the competition.

Like all the other teams in the World Cup, Ghana’s hopes rest on a few select players, who will be expected to carry their nation’s hopes on their shoulders. Schalke midfielder, Kevin-Prince Boateng is one of these players. The versatile 26 year old has had spells playing for AC Milan and Tottenham, before he moved to Germany, and has shone for his club’s consistently. Known for his adaptability and all-round talent, he has only played 12 times for his nation, but he will hope to make himself known on a worldwide scale with good performances in this competition.

Andre Ayew is another player Ghana hopes performs well. The 24 year old winger is experienced at this level, having got 48 caps for his country, and out wide, he has shown his prowess. Having played for OM his whole career, he has made himself a well-known name in France, famous for his hard work, both offensively and defensively, as well as his quick feet. He will expect to be one of Ghana’s primary sources of assists.

Sulley Muntari is Ghana’s most experienced player, and at 29, this will most likely be his last World Cup, meaning he will want to leave a good impression. The well-travelled 29 year old has formed a formidable partnership in the centre of midfield for the Black Stars alongside Michael Essien, which many have cited as one of the main reasons Ghana have enjoyed such quick success on this scale. The industrious defensive midfielder’s presence is not only vital on the pitch, but he will have a major effect off the pitch as well, helping the younger players in the squad.

Former Porto star, Cristian Atsu had a very successful African Cup of Nations, and he will hope to follow that up with some good performances here, on an even bigger stage. Still young, the 21 year old will have to manage his nerves well, and after a good season on loan to Vitesse from Chelsea, he will want to continue his form here. His creativity and flair have been exciting for both his club and country, and if he has a good tournament, he could help Ghana do well.

Brother of Andre, Jordan Ayew is a player who could find himself starting for Ghana, and he is one to watch. A raw talent, the 22 year old is also at OM, but after not getting much game time on loan at other clubs, there is a concern about his playing level. He was still chosen, and will be the main backup to the country’s top scorer, Asamoah Gyan. However, if Gyan were to get injured, or his form was not great in the opening game, Ayew could be chosen for a place in the first team. Keep an eye out for him, as the clinical finisher could make a mark on the outcome of Ghana’s group, and competition as a whole.

A former Ghanain player, James Kwesi Appiah will manage Ghana for this competition. Appointed in 2012, Appiah led them to 4th place in the Africa Cup of Nations, and also became the first black manager to get the side qualified for a World Cup. This is the manager’s first managerial role, after he was assistant manager of the side in 2010, and so many are still unsure about his qualities, but his attacking style seems to have won some critics and fans over.

Despite their impressive runs in this competition in previous years, I believe it will be unlikely for them to upset Germany or Portugal to reach the knockout rounds, primarily due to their poor defence, which I don’t see being able to fend off the likes of Thomas Muller and Cristiano Ronaldo. I still think they will finish above the USA, with their experienced midfield playing a huge role for them. Ultimately, however, I predict they will leave Brazil disappointed, and it is likely that they will undergo a huge squad revamp, with many of their stars such as Michael Essien and Asamoah Gyan reaching the end of their career’s. Hence, this will be a good opportunity for their young players such as Cristian Atsu to get good experience under their belt of playing in a World Cup, and hopefully players like him can help mould the new generation of Black Stars which will try to compete in Russia in 2018.