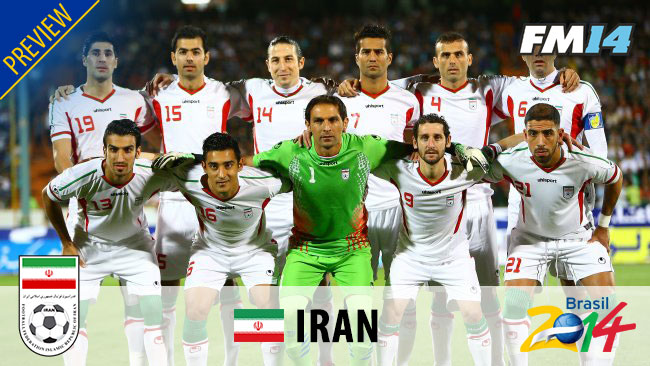 Asia’s 4 qualifying places will always throw up a minnow, and this time around it is Iran. Known for its wars and controversial laws, Iran will be looking to put in a positive performance in Brazil.

Iran have been drawn into Group F, alongside Argentina, Bosnia & Herzegovina and Nigeria. It is neither a good or bad group, and the underdogs of Iran could just cause some upsets if they play well.

Iran have gotten to the FIFA World Cup on just 3 occasions before 2014; 1978, 1998, 2006. In those 3, they failed to advance past the group stages and they have only won 1 game, defeating the United States 2-1. Iran have always struggled to qualify, due to limited AFC places and their record once in the Cup is even worse.

Dejagah is the superstar of the Iranian team, and is one of just 6 Iranians playing in Europe. Dejagah is undoubtedly playing at the highest level as a rotation option at Fulham and will be the key to any success for Iran. The right winger possess good speed, and can dribble well. He will be used on the right flank primarily, and the flamboyant Dejagah will be leading the team with his performances.

USA has Landon Donovan, Australia has Tim Cahill and Iran has Javad Nekounam. The captain and midfield king of the side, Nekounam has been a stalwart of the country for 140 caps, and is still going strong as one of Iran’s stars. Nekounam is not just a mediocre player stuck in Iran, he has good skills as well. He is a good header, can position himself well and can run all day long.

Iran’s midfield is actually more potent than at first glance, and Dejagah and Nekounam are joined by attacking midfielder Masoud. The Las Palmas AMC/left winger is a great asset to Iran and will form a deadly winger duo with Dejagah. He is an amazing dribbler and has great flair. Masoud, Nekounam and Dejagah will be the heart of Iran and the trio could pull the team over the line in matches by themselves.

Iran have safety in numbers in their midfield with young Rahmani lining up alongside Nekounam in the centre of the park, whilst also providing cover for Masoud. Rahmani is hitting his strides at 22 and has good all round stats.

Iran have a small group of unknown strikers, but this youngster could just lead the attack. His youthfulness and obscurity could see him become a big headache for opposition defenders.

Iran will come to the World Cup under the tutelage of a world class manager, with Queiroz having previously managed New York Red Bulls, Real Madrid and Portugal twice.

Luckily for Iran, their select group of stars has not sustained any injuries and they will go to the World Cup clean.

Let’s be honest, Iran isn’t the most illustrious team coming in the Cup. And despite my love for underdogs, they will undoubtedly suffer at the hands of Nigeria, Bosnia and Herzegovina and especially Argentina. The fact that Argentina’s worst is better than Iran’s best is just the top of a long, daunting list of why Iran will have the life ripped out of them.