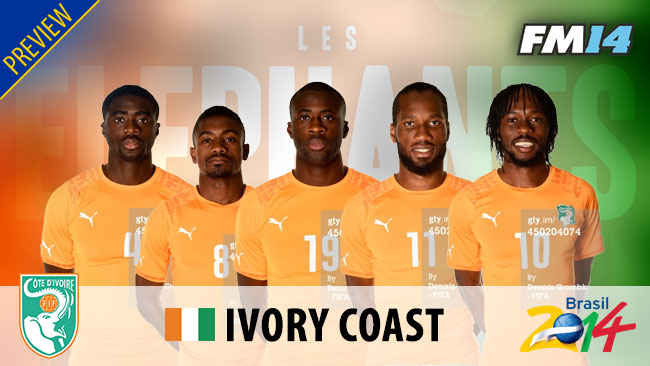 Ivory Coast. Les Éléphants as they are known across the world, have recently become the World Cup's dark horses over several years. Ivory Coast are not known for it's club football as the players it produces are sometimes, if not always, shipped out to European teams. Cote D'Ivoire possess some great talent going into the Brazil World Cup 2014, there's a problem though. Yaya Touré, Kolo Touré, Didier Drogba, Didier Zokora. All recognisable names in the footballing world, particularly Barclays Premier League followers for their great performances on-field. They're all capable players. But they're all over 30 years old.

Ivory Coast have been placed in Group C alongside Colombia, Japan and Greece. Not the hardest group but not the easiest. Colombia contain some great talent in their side such as €63m Falcao, Porto's Jackson Martinez, Fiorentina's Juan Cuadrado, Monaco's James Rodriguez and Inter Milan's Fredy Guarin. All extremely talented players. Ivory Coast will need to be at their best to fend off the powerful strikeforce of Colombia, who are favourites to go through to the knock-out rounds with Ivory Coast. But that doesn't underestimate the quality of both Greece's and Japan's squads.

Ivory Coast haven't had the greatest of times in the World Cup in the past, with their best achievement being reaching the Group Stages in both World Cup's 2006 in Germany and 2010 in South Africa. The manager Sabri Malouchi is desperate to change this in Brazil.

Ivory Coast boast some of the greatest individual talent in Africa, if not the world. The midfield and attacking strength will come in handy for Les Éléphants in Brazil when playing the worlds best teams.

Obviously Ivory Coast's main attacking threat. Known worldwide for his time at Chelsea, Drogba is Ivory Coast's all-time top scorer which is saying something with 60 goals in 95 appearances. At the age of 35 years old, this is looking like Drogba's last World Cup and he will be looking to make one last impact on the world stage for his nation.

Ivory Coast's main man. The dictator in the center of the park. Touré is identified by many as the best midfielder in the world at this moment in time, after leading Manchester City to the Barclays Premier League. Yaya is all you ever wanted in a midfielder, he is a playmaker as well as a defender, as he possesses great passing and tackling, one of the best in the world at both. Yaya will be almost carrying his country on his shoulders throughout this World Cup.

Although he has been second fiddle to his brother in terms of quality, Kolo is essential to keeping the attacking threats of Colombia at bay. Kolo possesses pace and strength as well as being able to make a good tackle. Despite all this, Kolo really needs to sort out his positioning as he has been the weak point at Liverpool's defence this season.

Obviously, the talents of Drogba, and the Touré's have been recognised as some of the best in the world but some players performances sneak under the radar.

Although a name usually recognised across Europe, Doumbia's performances usually go under the radar due to him playing in quite an obscure league. We all know that Didier Drogba's finishing and heading accuracy is on point but Doumbia brings pace and creativity to the table up top. Doumbia and Drogba playing as strikers will be enough to scare any defender across the world. A frightening combination.

After a flop season at Arsenal, Gervinho was offloaded to Serie A's AS Roma, and he showed his true talent to the world. He picked up many plaudits in Italy and some say he will be a main part in Ivory Coast's World Cup campaign. With Drogba waiting to be supplied in the box, Gervinho can offer that this summer.

Lamouchi made 12 appearances for France, with his first coming in January 1996 against Portugal, he wasn't a name that was thrown around as much as other French internationals at that time. He took the Ivory Coast job in May 2012 despite having no previous managerial experience, an strange appointment indeed. It will be interesting to see how far he can take Ivory Coast.

In Group C, I think that Colombia will make it out of the group with ease. Although, Ivory Coast's pace and strength may take apart Colombia's aging defence of Luis Perea, 35 and Mario Yepes, 38. Japan could be seen as a threat with midfielders Keisuke Honda and Shinji Kagawa leading the offensive force for Japan. In terms of balance, Japan seem to be going strong and could prove to be a challenge for Group C. 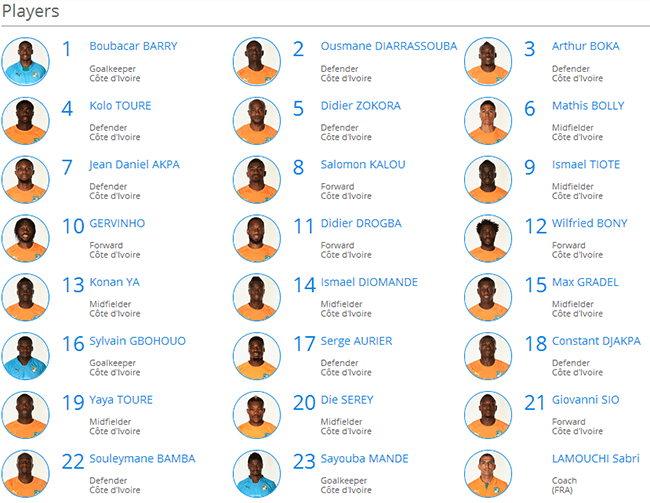