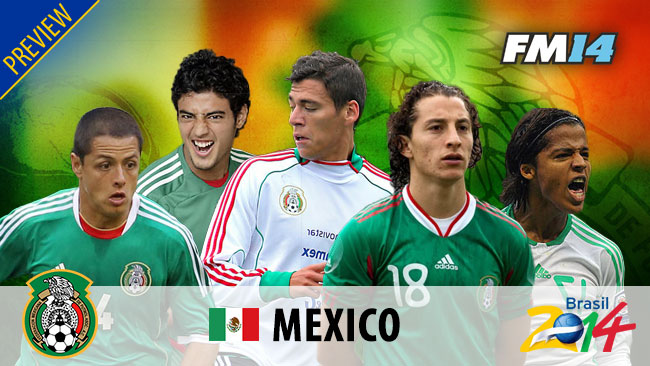 Mexico, the Land of Shaking Earth, will be looking to shake up the World Cup this year when they visit Brazil. While the reputation of their league system is perhaps at a loss due to the raw power of the European leagues as well as USA's MLS, Mexico's national team is by no means an easy one to overcome. They produce top-class youth on a regular basis and that was seen in the latest summer Olympics of 2012 in London, when they overcame everybody to claim the gold medal at Wembley.

Drawn in to Group A, Mexico face three tough oppositions in the hosts Brazil, as well as Croatia and Cameroon. All three of these teams possess devastating attacks, just like Mexico, and there are sure to be some exciting goal-crazy matches in this group. Mexico's manager, Miguel Herrera, will need to make a shrew team selection as he will need to nullify his oppositions' star attackers such as Neymar, Luka Modric and Samuel Eto'o.

Despite having never won a World Cup in their history, Mexico have reached the quarter-finals of the competition on two occasions, both at World Cups in Mexico, in their fourteen times competing in the world's most prestigious football competition. They will be aiming to make their fifteenth World Cup a more memorable one.

Mexico will need their key players to perform if they are to have any chance of progressing from the group stages. While Brazil have Neymar and Croatia have Modric, Mexico have their star striker Javier Hernández to rely on to score their goals. He may have found it difficult to break in to Manchester United's starting eleven but when he does appear for his club side, he makes a great impression on the game. His strengths lie in his movement and his clinical touch in front of goal. If Mexico are to progress, they will need Hernández to find the net regularly.

Of course, Hernández will need both supply and support up front in Mexico's efforts and Carlos Vela is the perfect man to have to fill that role. Vela, who can be deployed on either the wing or up front, has struck gold since moving from Arsenal to Real Sociedad in 2011, first on loan and then permanently. His goal-scoring record is extremely impressive considering the role he plays in the team, and he scored over twenty goals for his club in the past season. Carlos Vela will play an important role this summer.

While Hernández and Vela are important in Mexico's quest for goals, it is Héctor Moreno who will play a crucial part in their defence. The Espanyol defender has been solid for his club side this season and comes to the World Cup with a lot of weight on his shoulders. Mexico's defence is significantly weaker than their attack so Moreno will need to be able to lead his fellow defenders well and make sure that they don't give opposition many opportunities to score.

Mexico have a couple of players who you should keep an eye out for. The first of these is Andrés Guardado of Valencia. Despite playing over fifteen matches for his club this season, he was subsequently loaned out to German side Bayer Leverkusen where he played five games. The left winger's strengths are his electrifying pace and his ability to cross the ball. If given the chance, Guardado could potentially shine for his side and make the difference in their campaign.

Mexico's second player who you should keep an eye out for is Villareal striker Giovani dos Santos. The Barcelona product scored twelve goals in his debut season for El Submarino Amarillo and looked very impressive as he helped his team to a surprisingly-high 6th place, after just being promoted from Liga Adelante. dos Santos is very versatile and can play in any attacking position effectively thanks to his fantastic technical skills and pace. This World Cup could make or break his career, and he is looking to impress.

Not much is known about Mexico's manager Miguel Herrera except that he played for his country fourteen times before he hung up his boots for a managerial career. Herrera has spent his entire career playing or managing in the Mexican leagues and he won Mexico's Premier Division last year when he was in charge of CF América. Herrera is a very good judge of players and works well with younger talent. He is a believer in zonal marking and attacking play, while it is believed that he could utilise a 3-5-2 formation this tournament. This is his chance to put his name on the radar, he wants to succeed.

Mexico have a very strong attacking force and if football matches were decided by just attacking talent, Mexico would be one of the best in the world. However, football requires defensive talent too and Mexico is very weak in that area. In a group which features Brazil, Croatia and Cameroon, Mexico's fragile defence will be exposed time and time again by the elite players which oppose them.

My conclusion is that I do not think Mexico will reach the knock-out rounds. I believe that Brazil and Croatia possess much stronger teams and they will progress without much challenge. Mexico's defence would need to be on top-song to avoid an early departure from the tournament but considering they face the likes of Brazil's Neymar, Oscar and Hulk and Croatia's Modric, Rakitic and Mandzukic, I don't have much hope for Mexico. They won't give up without a fight but they are not made of the same elite qualities that Brazil and Croatia are.