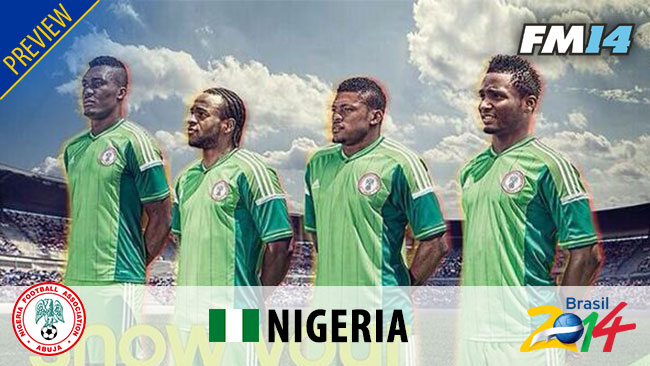 A whole country full of hope, Nigeria, will see their heroes hit the Brazilian shores, for the 5th time in their history. Fresh off from winning the African Cup of Nations, Nigeria will be hoping to put their South Africa 2010 results behind, and progress out of the group stages. With their best finish, the Round of 16 Stage, coming exactly 16 years ago, an entire nation will be expecting much from their stars, which include Chelsea duo, John Obi Mikel and Victor Moses.

After Nigeria were drawn into Group F, they could breathe easier, as their African counter-parts were drawn into much harder groups, which include the likes of Portugal, Colombia and Germany. However, they will clash with top-class players, as they will have to face Argentina's Messi, Bosnia's Dzeko and Dejagah's Iran. But, under the guidance of a former player and national hero,, Stephen Keshi, a whole nation has the possibility of dreaming to get out of Group F.

Nigeria, as stated earlier, have only recorded a Round of 16 Stage as their best result, albeit doing it twice, but are two rounds shy of surpassing the African record. However, Nigeria will be looking at upcoming stars such as Kenneth Omeruo, Ahmed Musa and Ogenyi Onazi, to shine at this year's World Cup in Brazil.

Nigeria will be facing the likes of Bosnia, Argentina and Iran, and will be looking at the experienced likes of Vincent Enyeama, John Obi Mikel and Emmanuel Emenike to help them out of the Group Stages.

Vincent Enyeama has just finished off a glittering season at Lille, keeping 22 clean-sheets, and amassing an impressive streak of 11 clean-sheets in a row. In addition, he went 1,067 minutes before conceding, which saw him linked to a host of big clubs in the January transfer window. With 91 caps to his name, the experienced goalkeeper will be put under test against both Bosnia's and Argentina's glittering attack, which include Sergio Aguero and Vedad Ibsevic. Nigeria will have all their eyes on their captain and will fully expect him leading them out of the Group Stages.

Nigerians will be hoping that John Obi Mikel will be the key of stopping Argentina's style of play with his strong and effective tackles, and is seen as a key-player for them. The current Chelsea player has more than 200 Premier League appearances to his name, although he is not considered as a key-player for his club. The 27 year-old currently has 51 appearances for his country, and will be looking to add more than the 3 caps the Group Stages offer, as they will fight for their ticket to the Round of 16 Stage.

In the striker department, most Nigerians will have their eyes set on Fenerbahce striker, Emmanuel Emenike. The striker only made his debut almost a year ago, in a friendly against Sierra Leone. Even with a limited time-frame before going into the World Cup, the Nigerian striker has 23 caps to his name, and has scored 9 goals. His last national competition he played in was the 2013 African Cup of Nations, and was named in the 'Dream Team', after he scored 4 crucial goals, as well as assisting his team-mates a further three, as Nigeria won their 3rd African Cup of Nations in their history.

Nigeria have been blessed as a whole 'golden' generation is rising up, with the likes of Kenneth Omeruo and Ogenyi Onazi paving the way. Stephen Keshi has decided to call up a host of youngsters, which include CSKA Moscow winger, Ahmed Musa, and will be looking at them to impress in this international showpiece.

Kenneth Omeruo has struggled to break in the first-team set-up at Stamford Bridge, but has become an important player for Nigeria, cementing his first-team spot. The Chelsea player has been loaned out to ADO Den Haag and Middlesborough recently, and can be counted as he currently has 17 caps for his country. Omeruo will perhaps be one of the few players that can say that his spot is assured, as he has played an instrumental part in their 2013 AFCON cup win, as well as appearing in all 3 of Nigeria's matches in last year's Confederations Cup. The youngster will be looking to impress scouts from Europe, as he looks to set to move from Chelsea, at least on a loan basis.

Lazio midfielder Ogenyi Onazi will most likely partner Mikel in the heart of the midfield, and could be one of the players to watch in Nigeria's camp. The 21 year-old midfielder will be in charge of supplying the passes to the attacking department, who has the likes Ahmed Musa, Shola Ameobi and Emmanuel Emenike. The Lazio youngster has 51 appearances for the Italian club, and in the past two years, has broken into both his club and national team, and just might be the key for Nigeria to the Round of 16 Stage.

Nigeria's manager is a very experienced man on the international frame, even at his young age. The former Nigerian captain has managed Togo in two different spells and managed Mali as well. The former Nigerian player qualified Togo to an unexpected World Cup in 2006, but was unable to to lead them in Germany, as he was dismissed 6 months earlier, after a dis-hearted display in the African Cup of Nations in 2006. In his latest job as the manager of his own country, Nigeria, he has proven to be successful, winning the 2013 African Cup of Nations. Even though he has been criticized by leaving out stars such as Kalu Uche, Nosa Igiebor and Nigeria's hero in the 2013 AFCON final, Sunday Mba, it seems that he is happy with his squad he selected.

It's been a nightmare for international stars lately, as stars such as Marco Reus, Radamel Falcao and Frank Ribery have been ruled out. It has not been any easier on the Nigerians, as starting left-back, Elderson Echiejile, has recently been ruled out of the World Cup with a muscle tear, which will see him in the sidelines for at least 3 weeks. Former Inter winger, Victor Obinna will also be watching his nation kick-off without him, after a resurgent knee injury made him struggle for fitness. To make matters worse, Obinna's former team-mate at Inter, Joel Obi, will also miss Brazil's second World Cup as hosts, after he struggled with an ankle injury.

The media have touted the Nigerians to put up a strong fight against Bosnia and Argentina, but ultimately fail to progress from the Group Stages, the same result that happened 4 years ago. Even though Bosnia's match-up against the African side will most likely decide who's going to go through, I have to agree with the media's prediction, as Dzeko, Begovic and Pjanic, can become a nightmare for other teams, and become one of the unlikeliest dark horses in this World Cup. 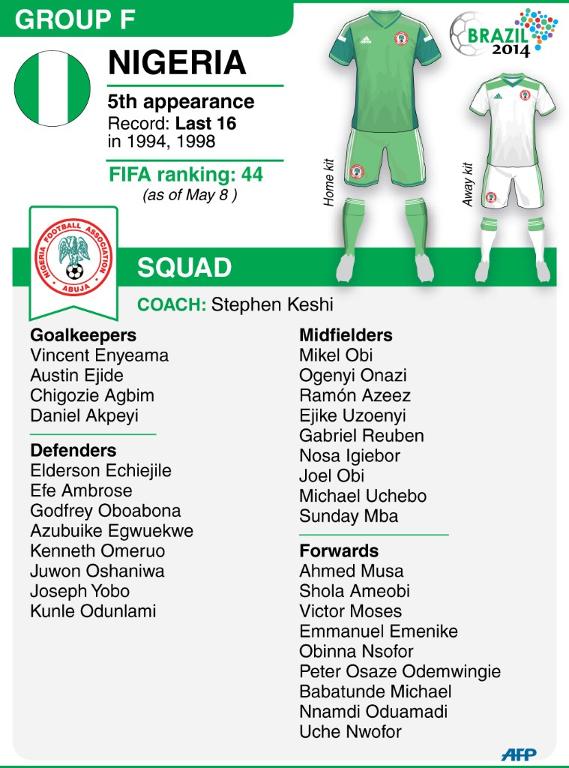