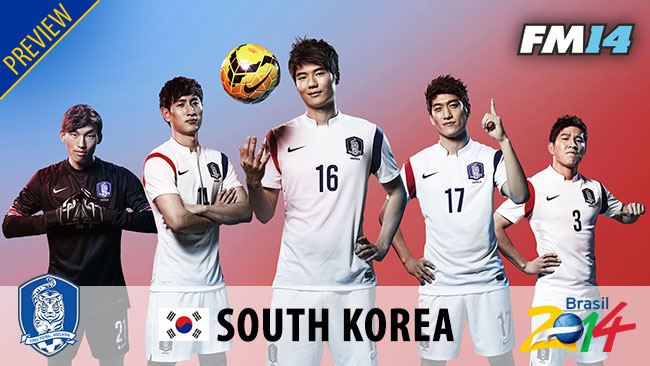 South Korea are widely considered one of Asia’s most successful national sides, holding the unique honour of reaching the semi-finals of a World Cup, when they co-hosted the competition back in 2002. Despite this, they are still large outsiders to qualify from their group, and many are writing them off as potential participants in the later stages. However, with a lot of passionate support and lots of energetic and enthusiastic talent, the Reds might give one of their best showings at this year’s competition.

Their group, Group H, on paper looks fairly obvious, as most critics expect Russia and Belgium to go through, ahead of South Korea and Algeria. In order to progress they will need to beat Algeria and pull off an upset against one of the two big nations. Belgium, boasting a squad containing the likes of Chelsea starlet Eden Hazard, as well as Manchester City captain Vincent Kompany look to be very dangerous, but Russia defence could potentially be broken, if South Korea play to the best of their ability, combined with some luck.

As previously mentioned, South Korea’s best run In the World Cup came in 2002, when they co-hosted the competition with Japan. Going into the start of the tournament, their hopes were not high, since they had never won a World Cup game before, but after historic wins against Portugal, Italy and one of the biggest shock’s in modern football, when they beat Spain on penalties to reach the last four. Despite being knocked out by Germany, it was hailed as one of the best runs of a smaller side in world football. In 2006 they were knocked out in the group stage, and in South Africa they were beaten by Uruguay in the first knockout round. The country which has won lots of its continental trophy will look to show the world their spirit and passion for the game.

Park Chu-Young has had a torrid time since joining Arsenal from Monaco back in 2011, enjoying little first team football and going on loan to club’s where he has failed to make an impression. However, his form for the national side hasn’t slipped, and he is the highest goal scorer in their squad, as well as their most internationally experienced. His performances up front will need to be of a high quality as his side desperately needs his goals if they want to stand a chance of getting past the group stages.

Keeper Jung Sung-Ryong will be key for the Asian side between the sticks, with his experience and quality going to be vital for their less than solid defence. Playing in the K-League his entire career, the 28 year old made a £1.2M move from Seongnam to Suwon in 2011, and performances for his new club have attracted the attention of some European clubs. The player who is seen as the best South Korean player to currently play in their domestic league, he will need to lead the side, and control and help his defenders well in order for this team to progress. Despite some poor performances in recent times for his country, if he does play to the best of his ability, he will be very strong in goal.

Koo Ja-Cheol has established himself as a very talented player in Germany, and he will be hoping he can use this competition to properly announce himself on a world scale. Currently playing for Mainz, the versatile attacking midfielder has spent the last 5 years at different clubs in Germany, after joining Wolfsburg for £1.7M. With a great long shot, and known to be a real team player, he will be crucial in helping his side create something from nothing when everything seems stagnant.

Despite all the experience in this team, all eyes are on Bayer Leverkusen winger, Son Heung-Min. The skilful player is the youngest in the South Korea squad, yet many consider him to be one of the best raw talents ever to come out of the nation. His great speed combined with his lethal finishing makes for a deadly player who could get into most nations starting 11. Joining from Seoul, Son starred for HSV, leading the way in terms of goals and assists at just 19 which caused Leverkusen to buy him last summer, where he has shone. If anyone is going to lift this side to new heights, it will be him. Former Sunderland player Ji Dong-Won is another player who could make a difference, or at least gain some vital experience for his future international ventures. The Dortmund-bound striker joined Sunderland in 2011, but after an ordinary season was sent out on loan to Augsburg, and in January 2014 he signed a permanent deal with them. However, they chose to terminate his deal after 6 months, and he signed for Dortmund. While not a prolific goal scorer, the player has impressed for the Reds’ youth team, and shown signs of his talent for the full team. Keep your eyes out for him, as he could have his breakout tournament in Brazil and fulfil the promise which has surrounded him his whole career.

Considering one of the all-time greatest South Korean players, manager Hong Myung-Bo is widely renowned in the footballing history of this nation, holding many records for them. First joining the Reds’ coaching staff as the U21 manager, Hong had moved up the chain before being appointed head coach on the 24th of June 2013, and was given a year to prepare his side for the upcoming World Cup. As a national legend, he should have no problem inspiring the players to give it their all, and his appearance and history could be just as important as his managerial ability.

The media are on the fence about South Korea’s chances of progressing from the group stages, with many citing their previous record in this competition as reason why they should be serious contenders for qualification from this group. However, others mention that Russia and Belgium are too good with too many stars not to advance.

Personally, I believe that while it is not inconceivable that Korea could pull off an upset and qualify, I don’t believe that it will happen with a very good tournament form several of its stars, especially Son, who is carrying his nation’s hopes on his shoulders alongside some of the other, more experienced players, in the team. While finishing 3rd in their group on paper does not look too disappointing, in reality, their fans will be devastated if they lost at the first hurdle. If they are to qualify, their match against Russia is vital, as if they can get a good result, it is possible that they will yet again be the most successful Asian side in the competition.