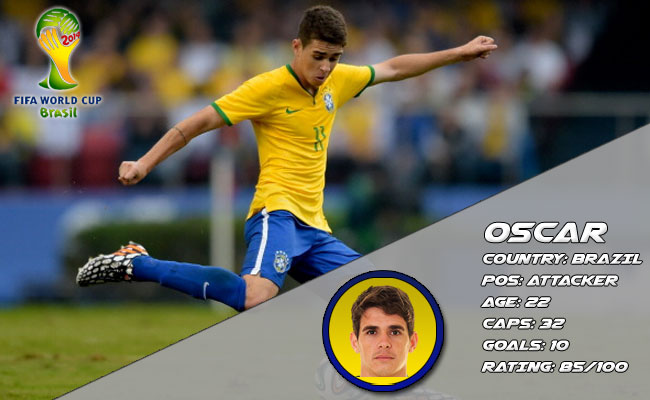 Oscar (dos Santos Emboaba Júnior) has already found the spotlight in this year’s World Cup competition after a dazzling performance in the competition’s opening game between Brazil and Croatia. The much loved attacking midfielder was key in his side’s victory over a Vatreni side who certainly impressed the millions of people spectating the fixtures world-wide. While Oscar did not pick up the Man Of The Match award, he played an important role for o Canarinho, scoring the third goal in the 3-1 victory.

Who is Oscar? Oscar grew up in the Brazilian city of Americano. He began his footballing career at the age of seven when he joined the youth ranks of União Barbarense, where he progressed through their system for six fruitful years. In 2004, Oscar’s potential was discovered by talent scouts who made his presence known to Sao Paolo FC, who he subsequently signed for at the age of thirteen. Oscar made his professional debut for the club in 2008, aged just seventeen, and he went on to make a total of 11 appearances for Sao Paolo. However, after disputes regarding Oscar’s contract, he left for Internacional in 2010, where he began to make a large impression on football. In two years, Oscar played 36 times and bagged 11 goals for Internacional before moving to Chelsea in 2012 for £19.35M.

Oscar’s move to the Premier League has been one well appreciated by all football fans as he has become a key part of Chelsea’s attack under Roberto Di Matteo, Rafa Benitez and current manager Jose Mourinho. Deployed in attacking midfield just behind the striker, Oscar has contributed to Chelsea’s goal scoring over the past two seasons, bagging 12 goals in 67 appearances. With his reputation increasing on a club level, Oscar has solidified his place in Brazil’s starting line-up since making his international debut in 2011, and has made 32 appearances, scoring ten times, the latest of which came againt Croatia.

How does he play? Oscar is an attacking player and is deployed either behind the striker or on the right wing. Reaching just 5’9’’, Oscar is slight in stature but he more than makes up for it with his pace and strength. He is an athlete and is strong in all physical aspects, except for his height. Off-the-ball, Oscar gets in to good areas when his team has the ball and tracks down opposition players when his team doesn’t have the ball. His positional awareness is one to envy and he is rarely in the wrong place at the wrong time. His work ethic was visible in yesterday’s fixture against Croatia, as he hussled and harried the Croatian players when they got on the ball anywhere near Oscar. He made them uncomfortable on the ball and he was almost impossible for them to pick up with his darting runs.

On-the-ball, Oscar hardly ever makes a mistake. Oscar’s technique and control of the ball is fantastic and during last night’s game, the ball seemed to stick to his feet as he ran rings around the helpless Vrsaljko. Combined with his creative mind and great awareness and intelligence, Oscar broke through Croatia’s defence time and time again, creating chances for others and a goal for himself in the end. He always made the correct decision in every scenario and worked the best out of whatever was thrown at him. His range of passing helped to stretch the Croatian defence and brought his team-mates in to the game.

Goals make great attackers and Oscar has scored plenty of great goals so far in the early stages of his career, most notably for Chelsea against Juventus in the UEFA Champions League. Oscar scored Brazil’s third goal last night in stoppage time as he held off two Croatian defenders, who were much bigger than him, and expertly dispatching a skillful ‘toe-poke’ from range in to the bottom left corner of the goal, leaving goalkeeper Pletikosa helpless in the Croatian goal. Oscar’s great goal-scoring ability was certainly not wasted last night and he almost scored, previous to his goal, with a wonderful curled effort from range with his weaker foot in the first half but Pletikosa denied him excellently. Oscar had to settle for just one goal but he has instilled fear in to all the goalkeepers present at the World Cup with his attacking display against Croatia.

Oscar has already impressed with a star performance and I tip him to be one of the World Cup’s star players. Brazil have a great history in this competition and plenty of great memories and legends. I predict Oscar to help Brazil battle for their sixth World Cup victory and to earn legendary status in his country. At the age of 22, Oscar has many World Cups ahead of him, but can this one be a successful one for him? 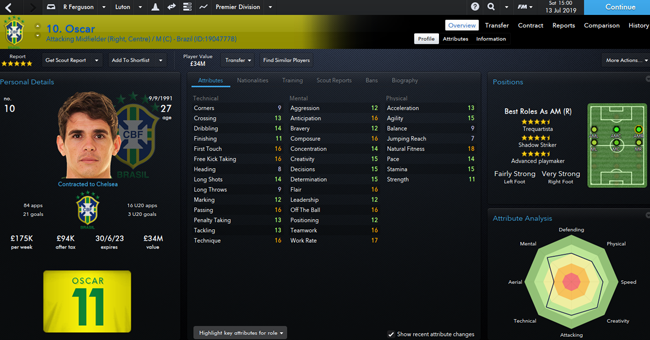