First off, I'd like to apologise for the lack of screenshots with this tactic as it was used in a network save and I don't have access to it unless the game host is online. However I will try to give as much detail as I possibly can and hopefully you guys can test it out.

This is my first post/submission though I have been playing Football Manager since the franchise was called Championship Manager. Never thought to upload any tactics I made until this one because the people in my network save accused me of using a downloaded tactic (Forbidden to use them in this save) as I was doing so well with West Ham. We were in early January as I'd just beaten Liverpool 2-0 at Anfield in the Carabao Cup Semi-Final first leg and was sitting 3rd in the Premiership. I figure if people are going to accuse me of using a download tactic then it must be good enough to actually be a downloadable tactic.

The formation and roles are pretty much suited to the squad West Ham have in the latest update.

GK - SK (Support) - Fabianski
DL & DR - WB (Support) - Masuaku & Fredericks
CB - CD (Defend) - Diop & Cardoso (I originally had Balbuena here but he got injured and Cardoso played better. I never bothered to change to BPD as he still played really well in this role)
DM - DLP (Defend) - Rice
MCL - Mezzala (Support) - Fornals (He will do ok here but I was looking to replace him with Szoboszlai as soon as possible)
MCR - BBM (Support) - Noble (Look to replace as soon as you can. I was looking at Guendouzi if I could ever pull it off)
AML - IW (Attack) - Felipe Anderson
AMR - IF (Attack) - Yarmolenko
ST - AF (Attack) - I bought Gouiri here though Haller will do ok. He always played well when he got games but I stuck with Gouiri for development reasons even though he wasn't banging in the goals.

Make sure to put your AML & AMR as your corner takers.

I don't know how much control people like to have but I'm pretty hands on, at the least I'd suggest setting individiual training yourself and training the players in whichever role they are going to play in (Noble as BBM etc.)

Like I said, I can't provide screenshots of results but it started fairly slow grinding out results and getting a few 0-0 games. Once the tactic familiarity filled out the results rolled in. I beat Spurs 1-0, came from 2-0 down to draw 2-2 with Arsenal, beat Liverpool 2-0 twice both games at Anfield and drew 0-0 with Man City. We sat 3rd in the league and thats when everyone said I was using a downloadable tactic.

If you are losing a game change mentality to Very Attacking, adjust Instructions to be more direct, GK to distribute quickly and put the WBs on Attack. Won't work everytime but it will save you some games.

Any questions I'll be happy to answer. Interested to hear what people think about my tactic. 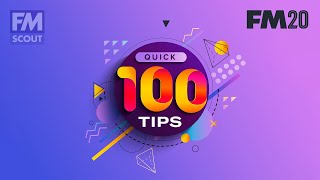