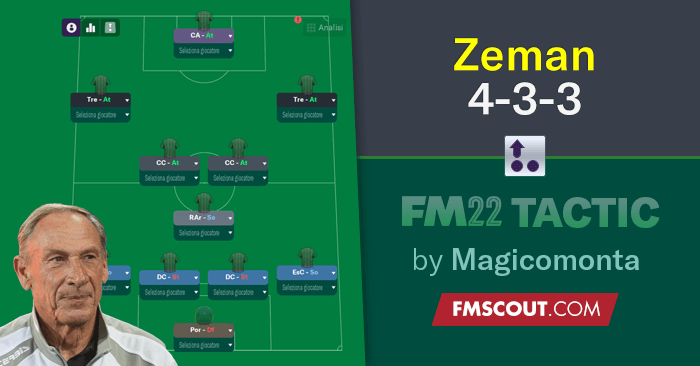 I tested the tactics on his style and to see if he could also perform with a top team I tested with Liverpool.

Remember that I test my tactics on a season without transfers, without special training, without ever changing tactics even during the match in progress and changing men only if injured or disqualified.

These are the results with Foggia that you can find in the attached YouTube video:

Merola as center-forward 26 goals and 1 assist (22 in the camp and second in the scorer class)
Rocca as an outside attacking midfielder 20 goals and 12 assists.
By grace another winger 6 goals and 21 assists
Garofalo from midfielder attack 12 goals and 9 assists
Ballarini another midfielder with 9 goals and 3 assists
Maselli director arr 4 g

Try them Liverpool with details in the most minimal screens that you also find in the YouTube video.

Second in premier with 92 points, 102 goals scored and 24 immediately Carabao Cup and FA Cup victory.
Eliminated from the Champions League with Bayer by 5-4