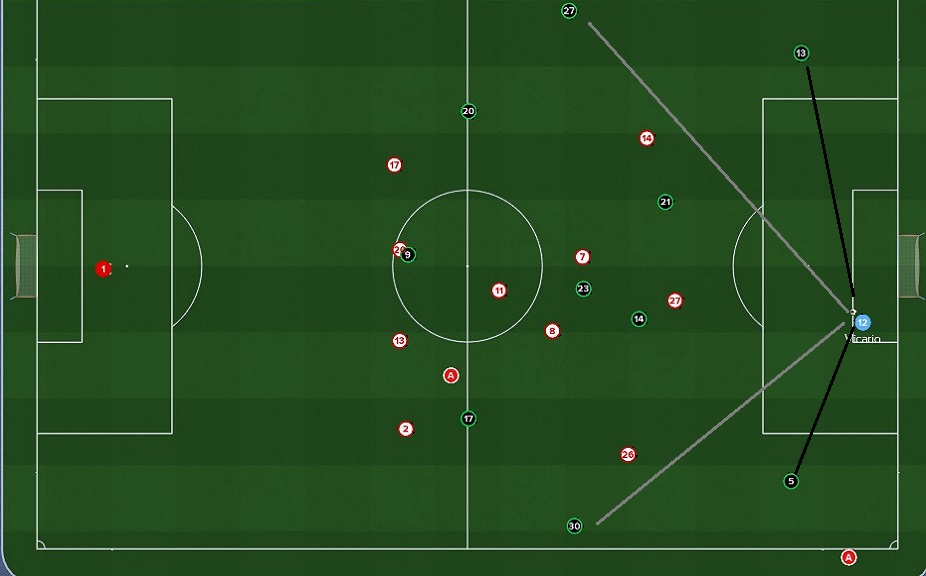 The construction normally takes place passing between the feet of the two central defenders. The full-backs widen to give width representing a viable alternative in the case of a high roll. 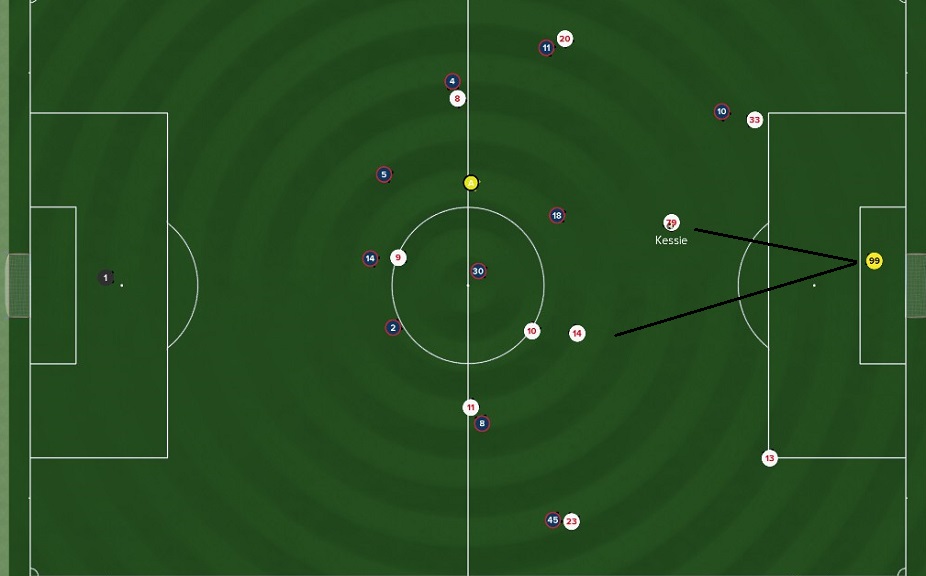 Another option is to build the game from the feet of one of the two midfielders. In the event that the fullbacks are marked and the transition to one of the central defenders is too risky this is a viable option as the midfielder in possession of the ball has a possible play more than the central: the launch vertically for one of the three strikers. 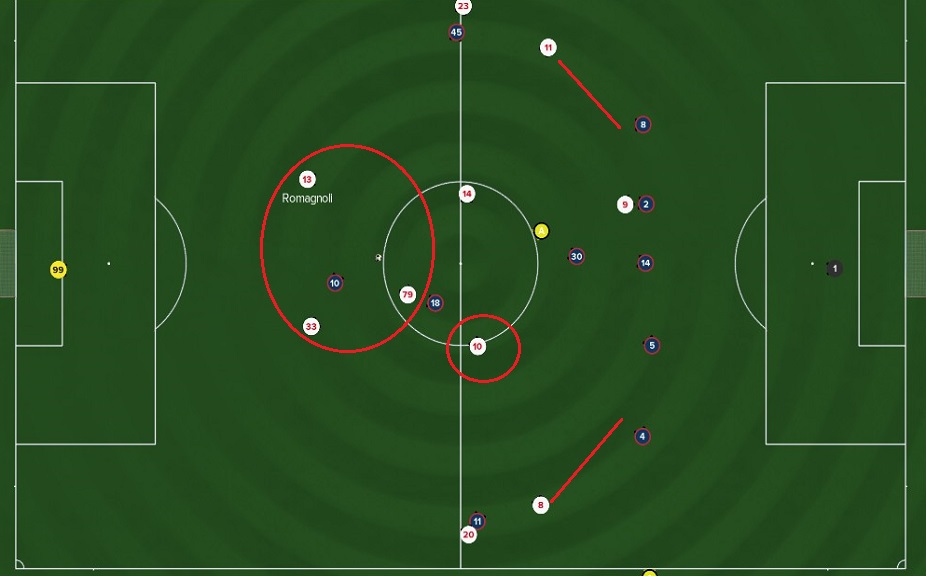 In midfield construction and consolidation of possession, the playmaker tends to come together to help the midfield composed of two men. The two offensive strikers give the team a lot of space before centering themselves once they have received the ball, while the two central defenders plus the ball-winning midfielder form a triangle that will remain the same in the finishing phase and has two functions: safe ball movement and cover in case of an opponent's counter-attack 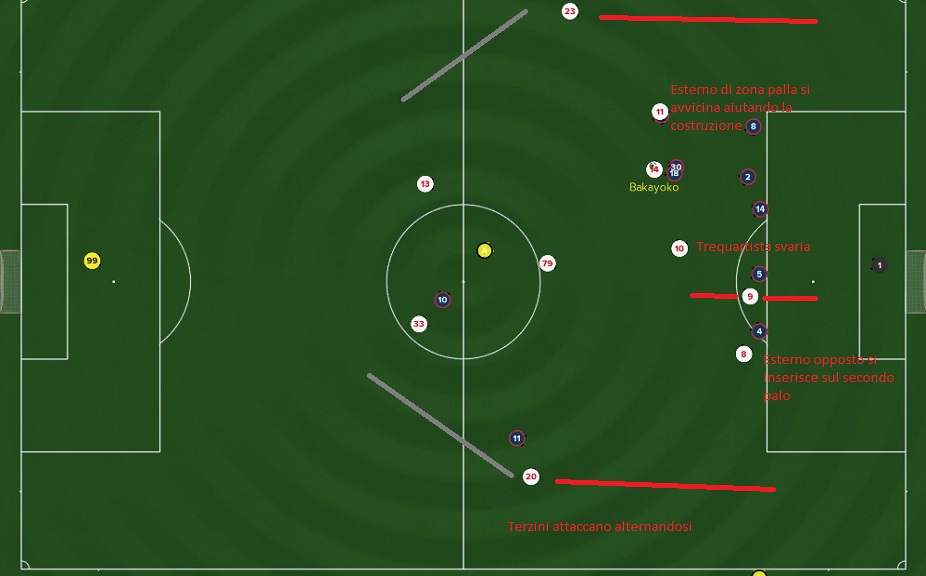 As is clearly visible the triangle formed by the two central defenders and the ball-winning midfielder remains throughout the possession phase. The fullbacks attack alternately, we will hardly see them sticking together the bottom of the field, crossing just arrived in an appropriate position. The offensive midfielder varied on all the offensive front so you'll see him a bit of everything while the central striker is always ready to attack the first post in the case of a cross and play on the shore. The winger near the action is proposed to receive the ball while the opposite one is inserted on the second post.

The constants found in these game situations are related to the movements in the area of ​​the attacker and the wingers. I would mainly divide them into four options:
- Passage or launch vertically for the striker
-Cross in the area of ​​the full-backs or wingers
-Insertation of the two wingers
- Shot from outside 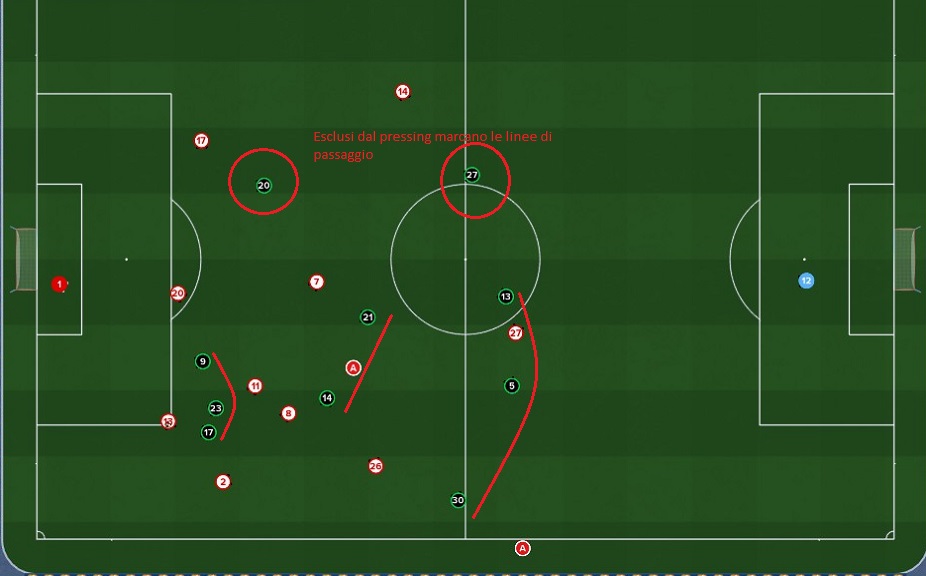 In the defensive phase the team tries to attack the opponent, doing a pressure oriented in the opposing half of the field. Oriented because it tries to bring the opponent from one side and then be aggressive closing all the lines of short passage. Once the opponent is brought to the side, some players attack the direct opponents, leaving the long ball to the ball carrier as the only solution. In the image you can see all this. The attacking midfielder attacks the ball carrier closing the solution for passage to the midfielder. The striker prevents the ball from being discharged to the neighboring man, while the winger covers the pass line for the fullback. The two midfielders shorten with the ball side full back while the winger and the full back in the opposite side return to the position but always ready to attack in case of change of game. The two central defenders are ready to divide the tasks on the attacking opponent in the event of a long roll.

When you find yourself defending in your own half of the team you have a 4-4-2 or 4-4-1-1, depending on the position of the offensive midfielder.
At this stage the defense is very narrow. Both the central and the defense sides are very aggressive on the opposing players who receive ball between the lines. 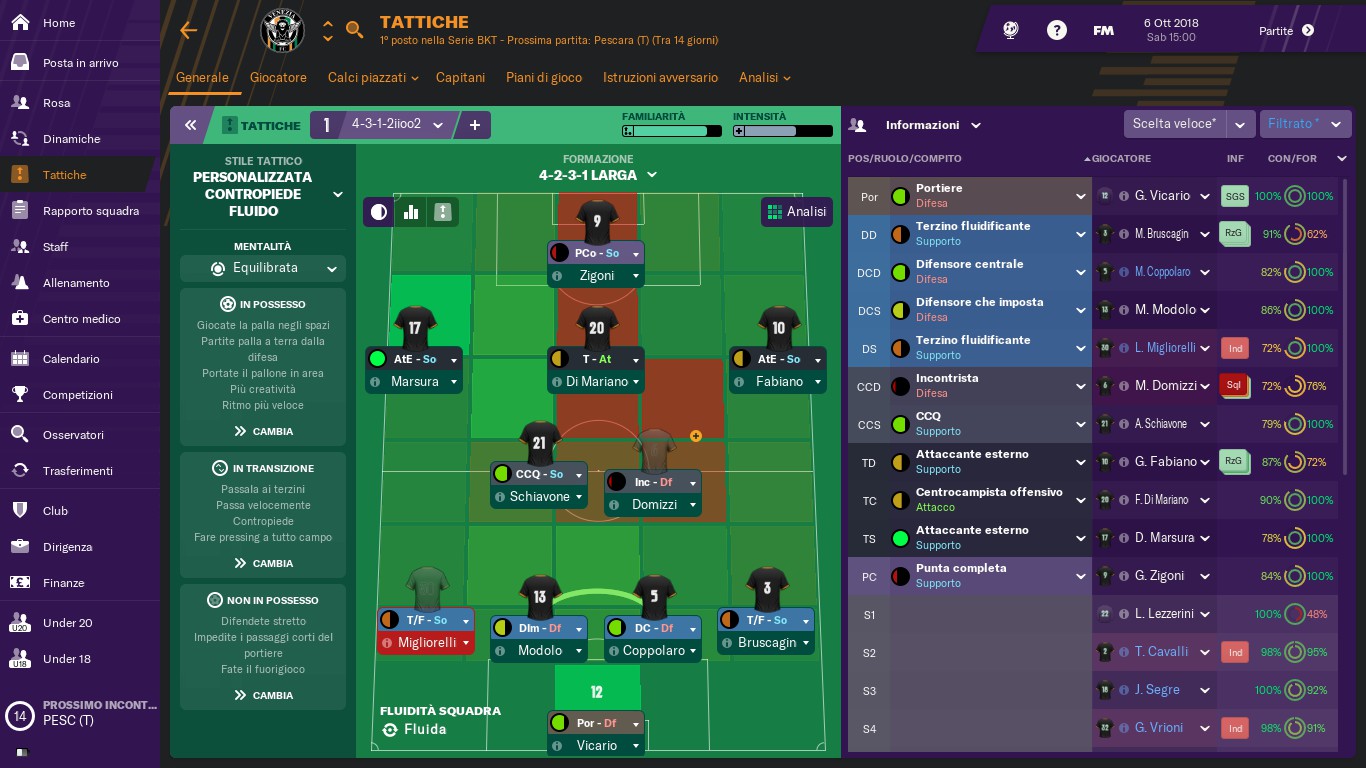