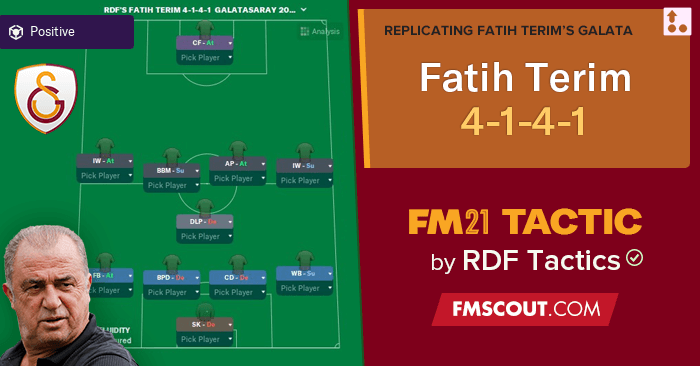 Believe it or not. This is currently Fatih Terim's fourth term at Galatasaray. In December 2017, the ex-Galatasary player replaced Igor Tudor as manager but the contract was only until the end of the 2018-19 season. With the 18 games left remaining, they produce some great results, winning 14 games, drawing once, and losing 3. To no surprise, he was then offered a two-year extension, an interesting one as no wages were agreed with the club president the one deciding the wages.

In May 2019, Galatasaray became the champions of the 2018–19 Süper Lig season. This was now his 8th league title in Turkey and to celebrate, in front of fans (52,000) Fatih Terim signed another contract and also celebrated his 45th anniversary with the club in 2019.

At the time of writing this, Galatasaray are currently sitting 1st with Faith Terim possibly winning 3 league titles in 4 seasons, so let's look at tactical methods

So far this season, Fatih Terim has preferred the 4-1-4-1 shape and has adopted more of a possession-based tactical style. This formation suits that. The three-man in midfield help Galatasaray both build-up and support the attack, bridging the gap between defence and attack. Antalyalı and Belhanda have been the star players in midfield.

When Galatasaray build-up, they do it with patience hoping their ball retention and players' movement off-the-ball will progress them up the pitch. Antalyalı is key in deeper areas, as he needs to be available to collect passes and dictate the tempo but also his positioning allows the wing-backs to stretch play. Instead of looking for direct passes into the forward players, the central midfielders would also drop to receive the ball, finding spaces and pockets for better passing angles. Counter movements are important here when building up, when one player drops to receive the ball then another moves slightly ahead. This can disrupt the opponent's shape.

Galatasaray, so far, are averaging 54% average possession (4th most in Super Lig) with an 83.1% pass completion ratio which might not sound all impressive, but that ranks them 3rd in the Super Lig.

They also like to build-up centrally, though not exclusively. Depending on the opponent's shape, Galatasaray having 3 men in midfield could allow them to have a numerical advantage and to collect the ball, the wide wingers could also be seen drifting into more narrow spaces to receive the ball.

Even in an attack, they prefer to create and score their chances in the central areas and either side is hardly used for a shooting opportunity, 73% of Galatasaray attempts have come from the middle area.

But this is where their key players operate. Their defensive midfielder (Antalyalı) is key in build-up phases and he holds his position in central midfield but is the main focal point in building up and averages the most passes per game for Galatasaray. Belhanda in central midfield is also another key player, another creative one. He likes to operate slightly further higher and so far has played the most key passes for Galatasaray.

In the 25 Super Lig games so far, Galatasaray have scored 50 goals and they are generally a positive side. Despite them scoring the 2nd most in the league, they have also kept the best defence record in the league and by some distance too. Only 19 conceded, given them a clean sheet percentage of 48%.

Whenever possible, they refrain from longer passes. Only three other sides have played fewer long passes (per game) than Galatasaray and to back the claim that Fatih Terim prefers possession, Galatasaray plays 429 short passes per game, only three other times have more.

Off-the-ball, you can see them deploy a high/mid-block trying to steal the ball from the opposition. They rather much prefer to win the ball back by interceptions or forcing errors rather than engaging in a tackle.

Is this going to be Fatih Terim's 3rd league title in 4 seasons? Despite last season's poor performance, this season they look on course to do so!

And that wraps up my Fatih Terim's style of play, I hope you enjoyed it and speak to you soon. 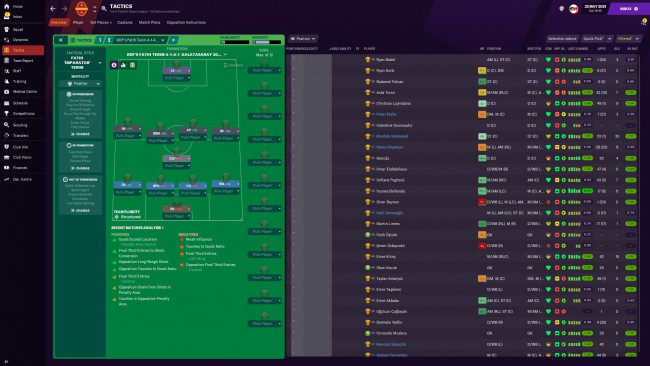 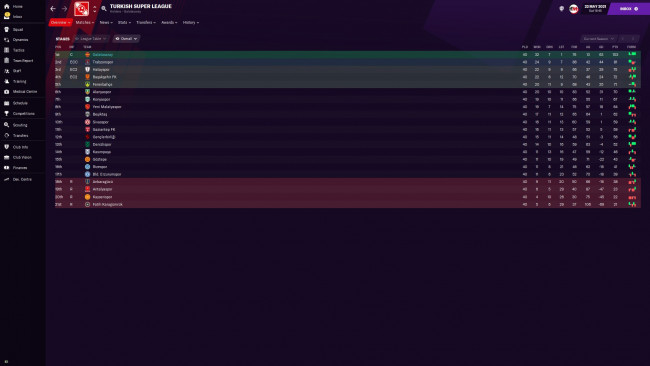