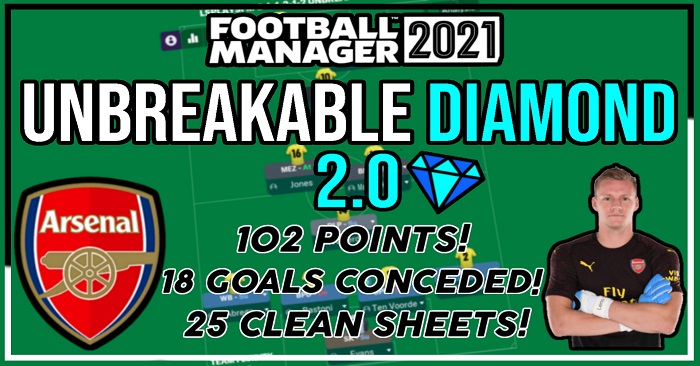 Welcome guys to my new improved 4-1-2-1-2 Unbreakable Diamond 2.0 Tactic which is of course based on the original version. This version is both a successful tactic at winning trophies having won multiple and very prolific when it comes to scoring goals and equally good defensively! It works by scoring on the counter attack and having a very high conversion rate in front of goal.

I have been mainly using this tactic in my Twitch save with Norwich City (you can find a link to my Twitch channel below) and have adapted it since the Winter Patch (21.4.0) to become even more effective on this version of the game. It has also been used in 2 simulated saves in FM21 with Arsenal & West Brom. In both these tests and the actual played season the tactic works very well with any size time always overperforming like crazy!

The tactic is a narrow 4-1-2-1-2 formation which utilises athletic wingbacks who get up and down the pitch to both attack and defend (and are vital for the success of the tactic), a pair of strikers, one who is an Advanced Forward who will provide the majority of goals for your team and a False 9 who will both score and assist goals and preferably a good mixture of technical and physical midfielders.

In each save game every team performed very well, both good defensively often having one of the best defences in the league and also the best attack or one of the best! With Arsenal and West Brom each side performed above expectations all getting some level of silverware or European football in the league and with Norwich we are currently unbeaten in all comps at the halfway mark and on for a quadruple. 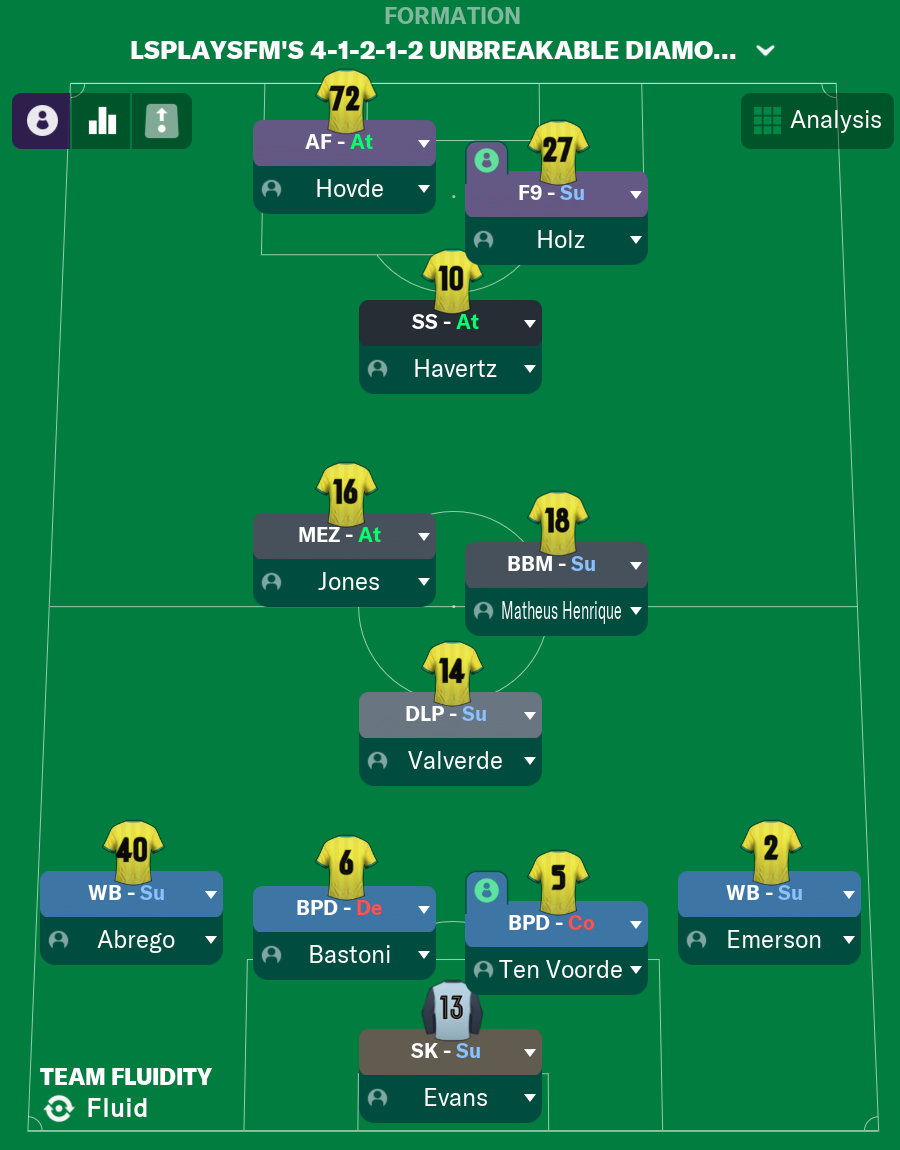 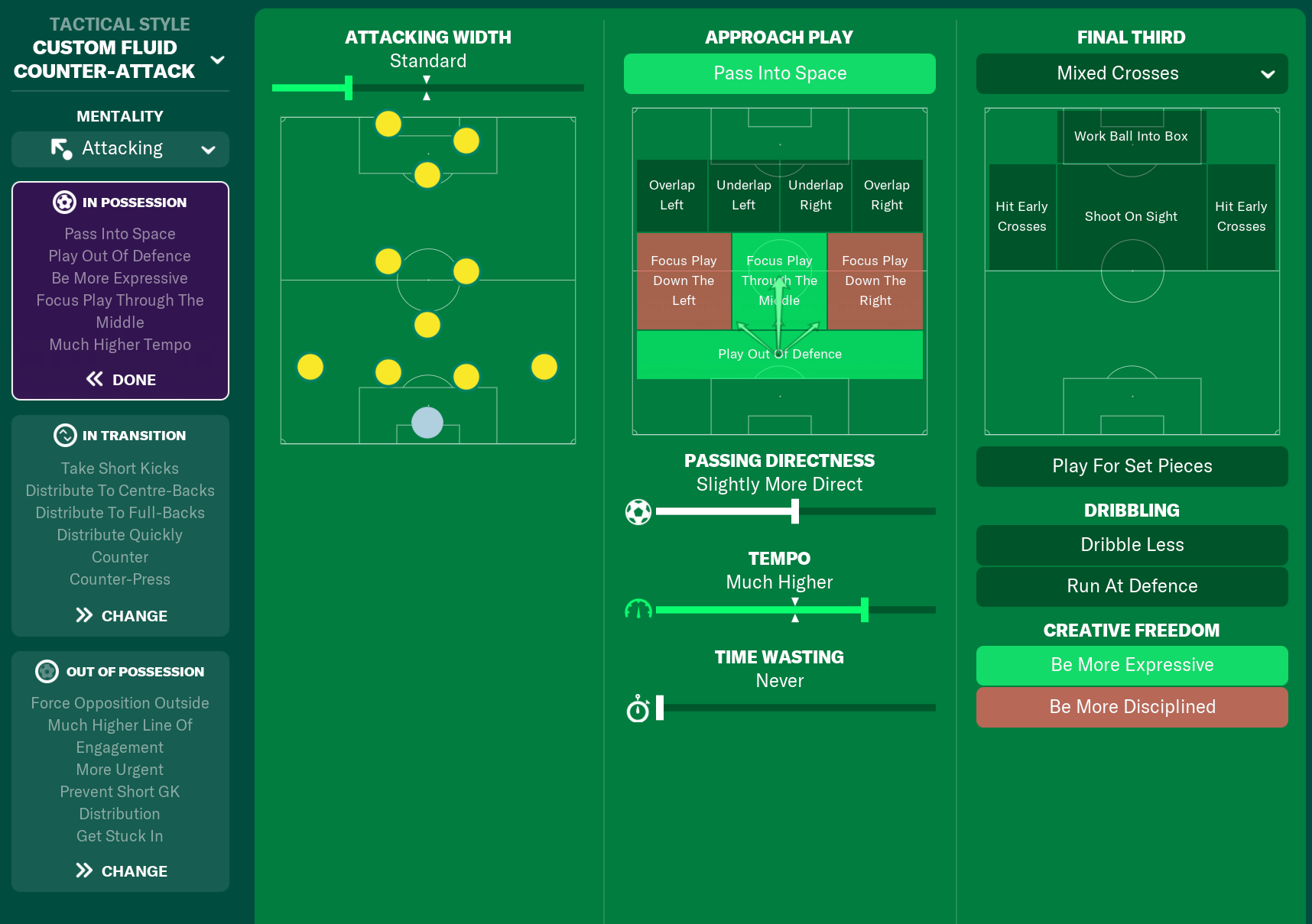 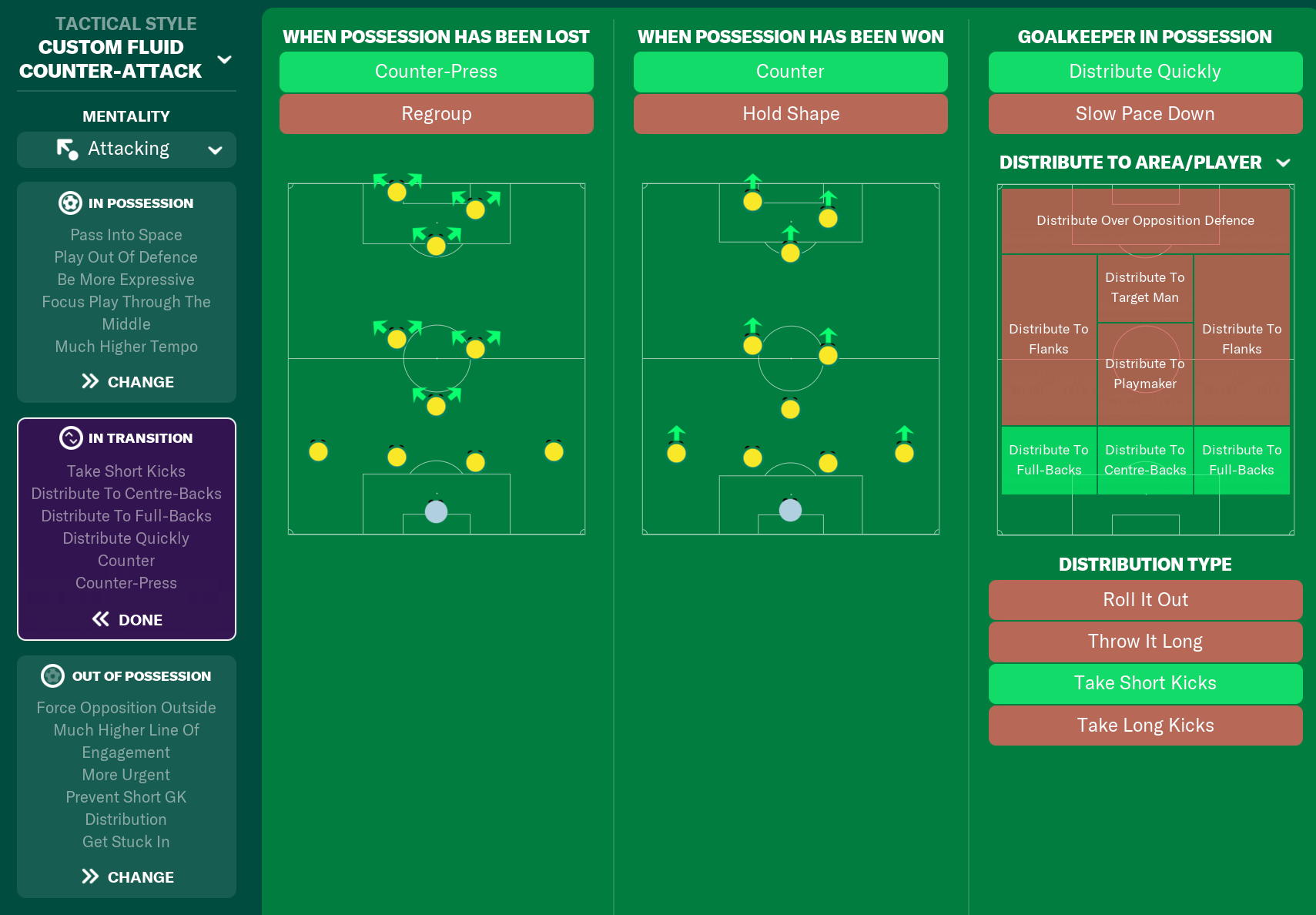 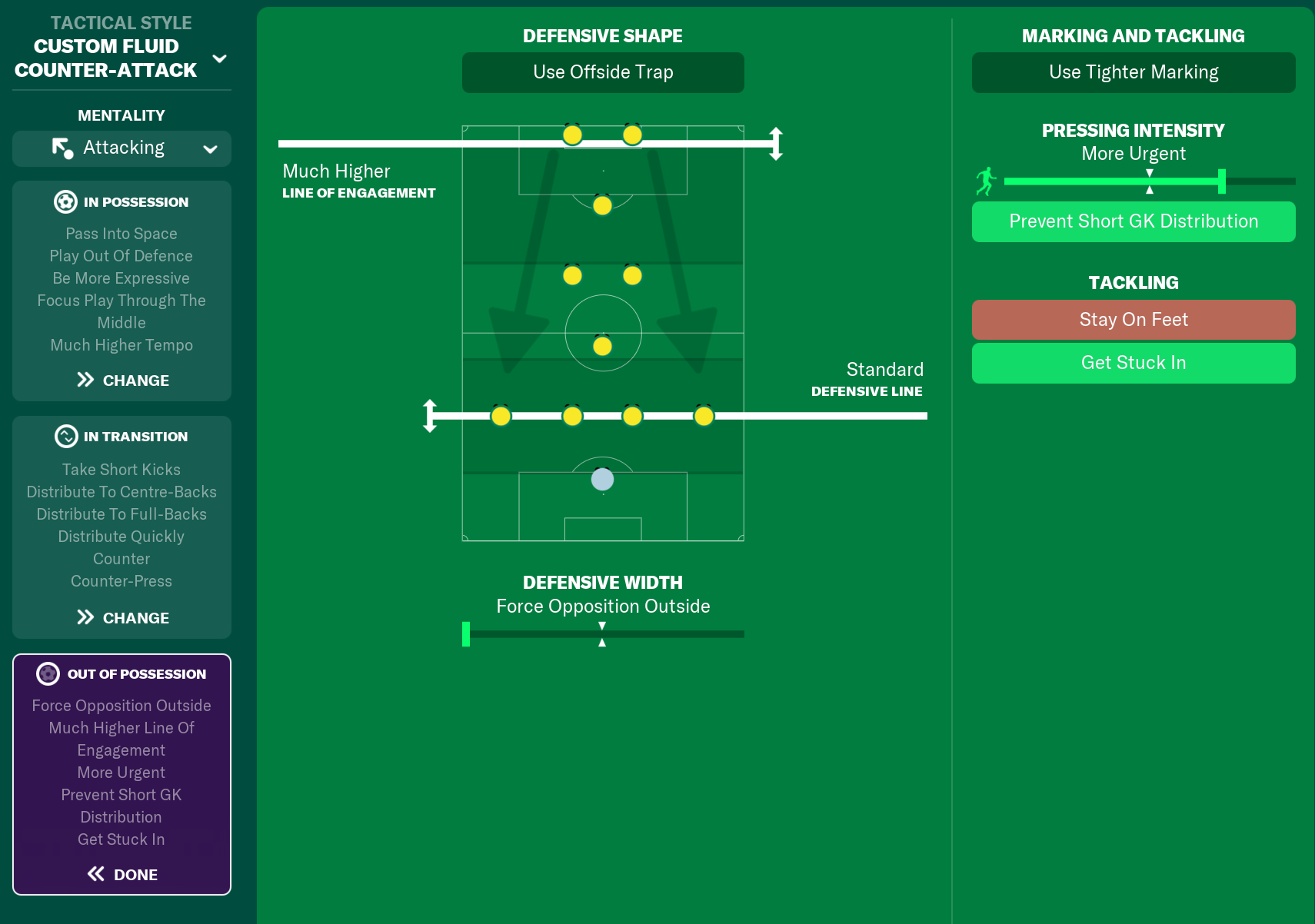 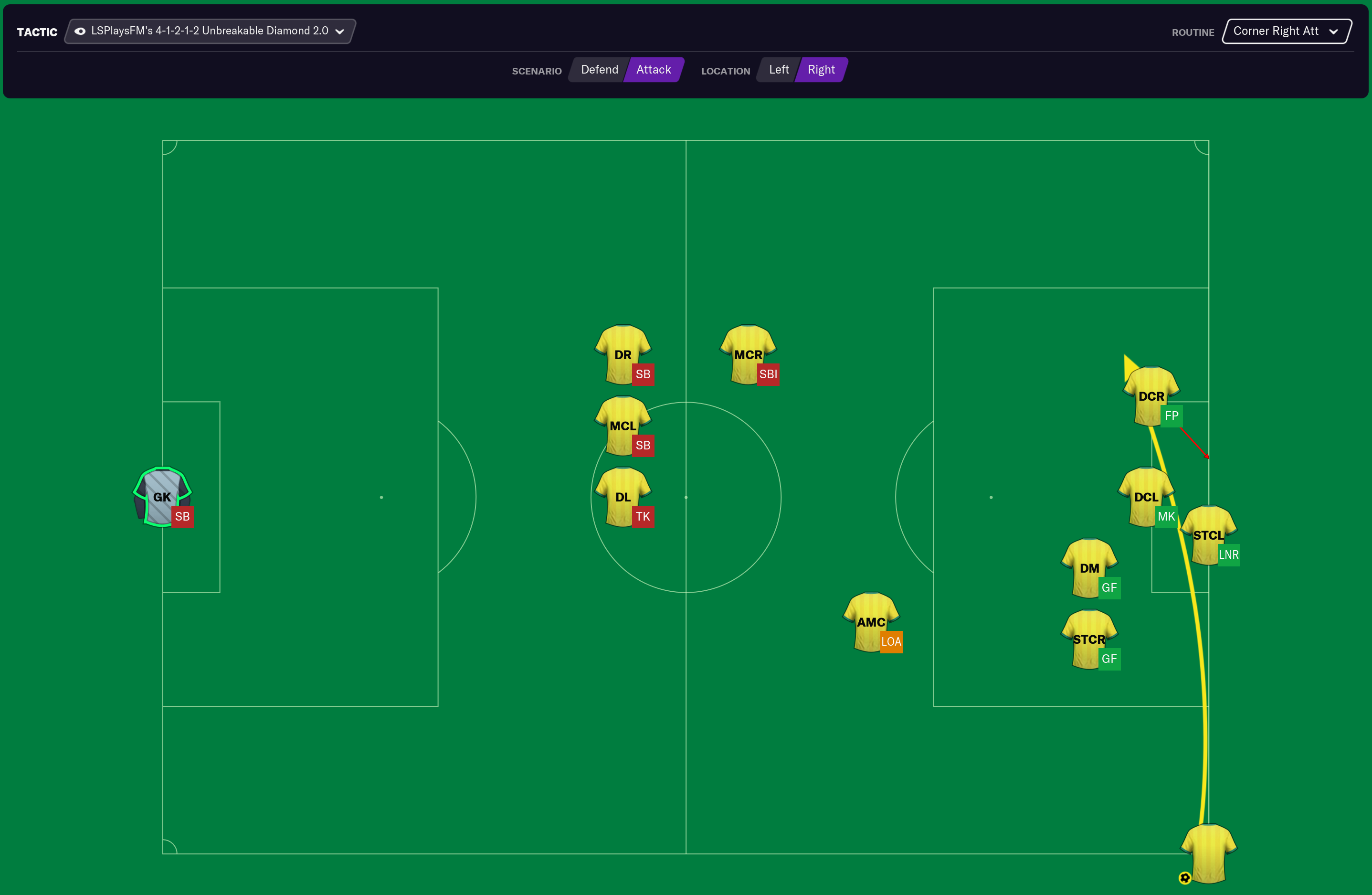 Just so you are aware with other Set Pieces these are set to default options as I found they worked well for my sides, but if you want to adapt them then feel free and you may find this allows you to score even more goals.

Using this tactic currently at Norwich in the Twitch stream, we are at the half-way point of the season and currently we are still unbeaten in every competition and on course for a quadruple possibly. We sit 2nd in the Prem behind only United with us on 45 points from 17 games and winning 14 and drawing 3! We have also scored 59 goals meaning we have a GPG of 3.5! At this point in time we also have 2 players in the top 3 for the Prem Golden Boot, we dominate the average ratings, the assist charts and also have a keeper with the 2nd highest clean sheets! Overall the team is simply dominating the Prem and are also doing well in every other competition now in the EFL Cup semis, knockout stages of the Champions League and about to kick off our FA Cup campaign. A quadruple is certainly very doable!

You can see below exactly how the team are doing in their competition below - I have also included the fixtures so far that the side has played so you can see exactly how good a run of form they are on so far, having played 27 games so far and winning 22 and drawing the other 5! 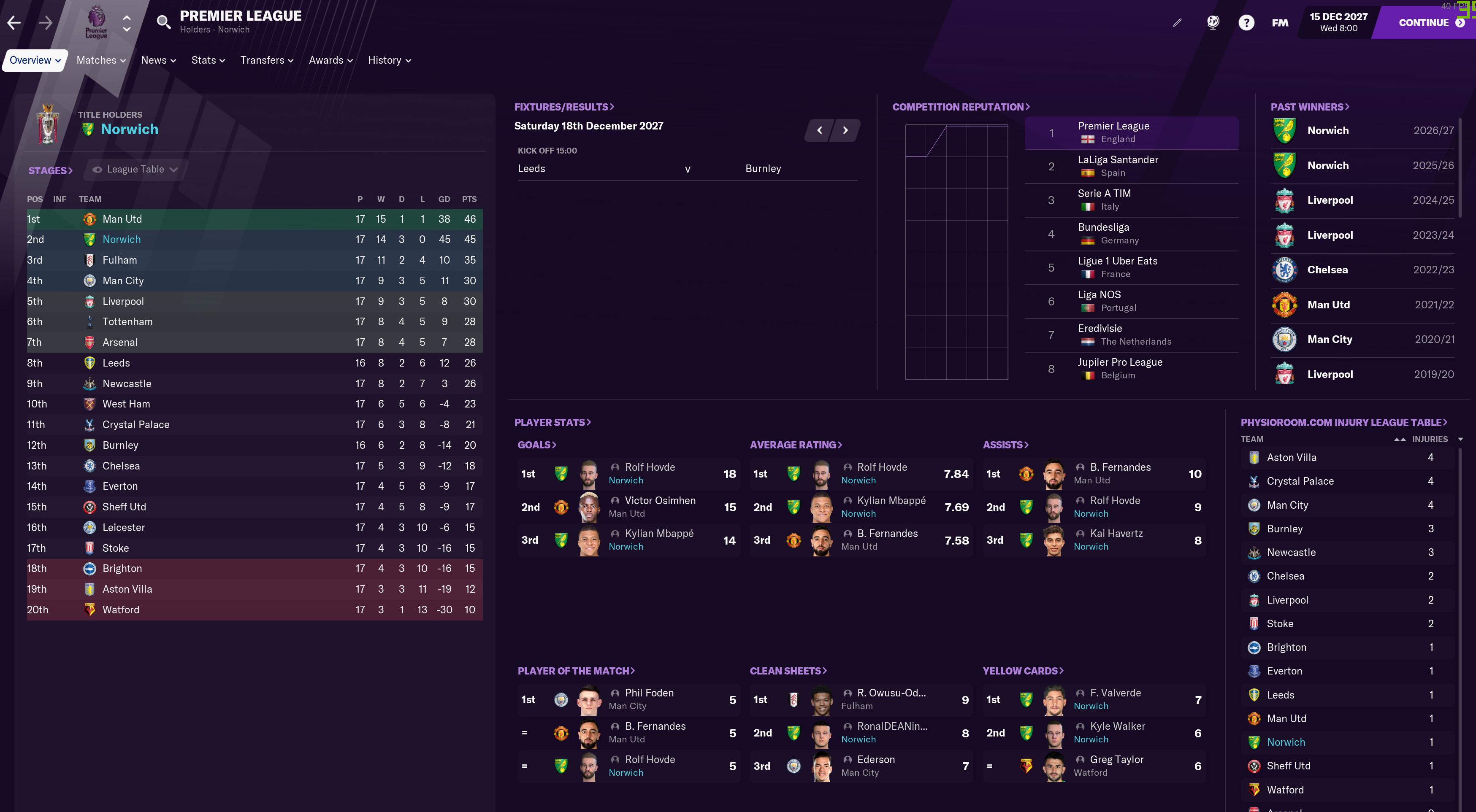 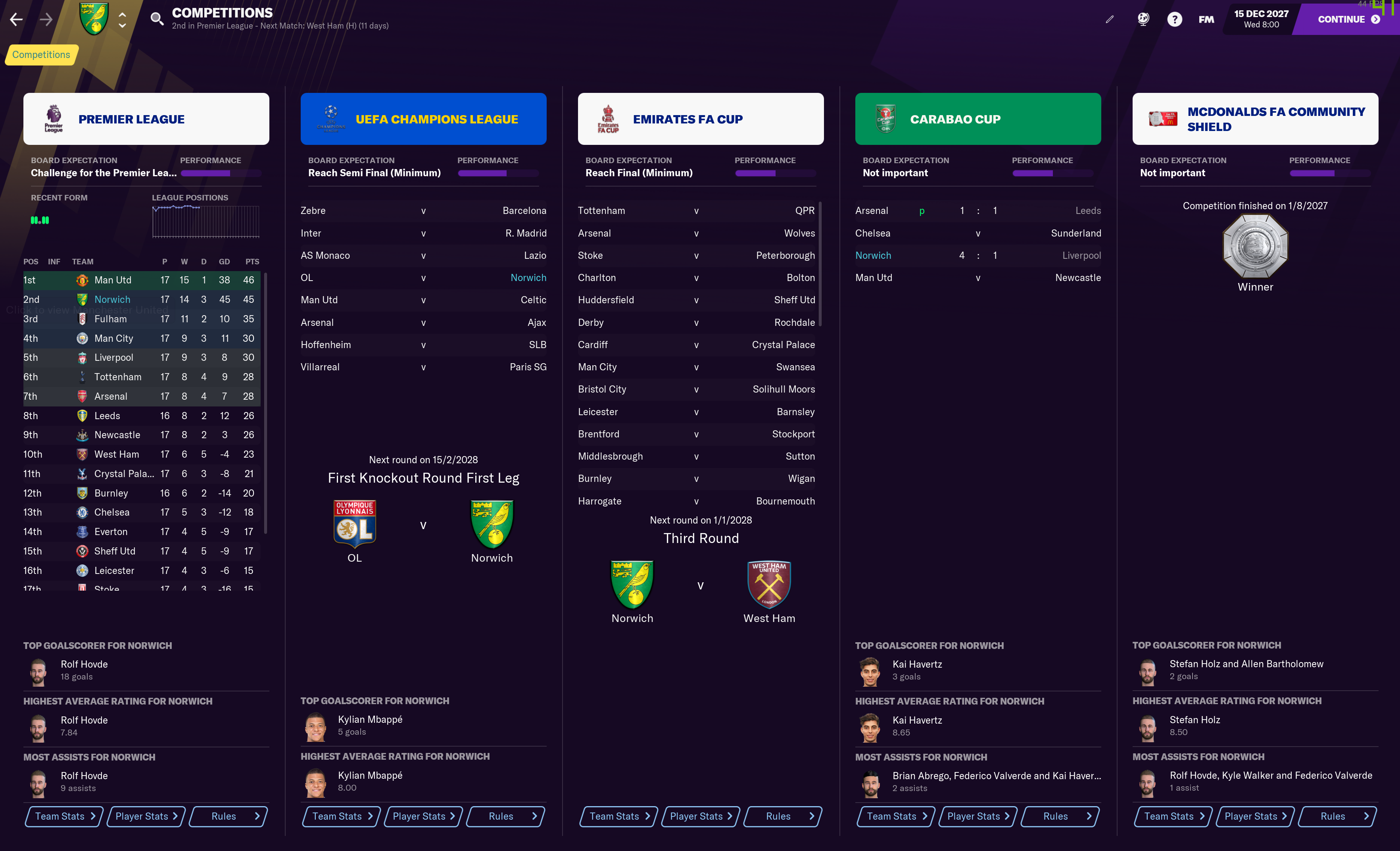 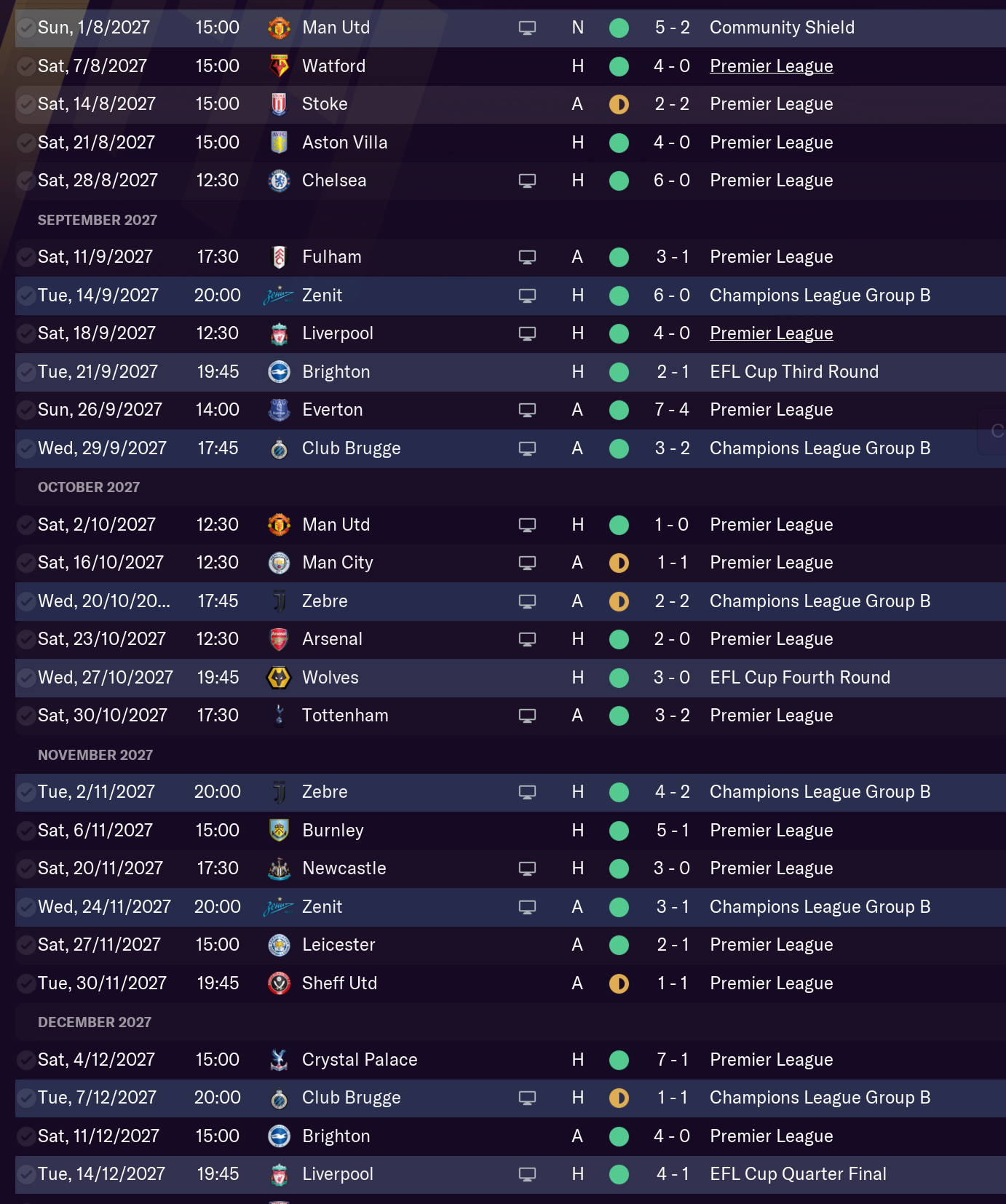 Below you'll find the analyst stats for Norwich in the Prem so far this season, they are by far the best offensively in terms of conversion rate & shots on goal and one of the most impressive defensively too again in terms of preventing shots on goal clearly showing the tactic does well in taking chances and preventing them too. 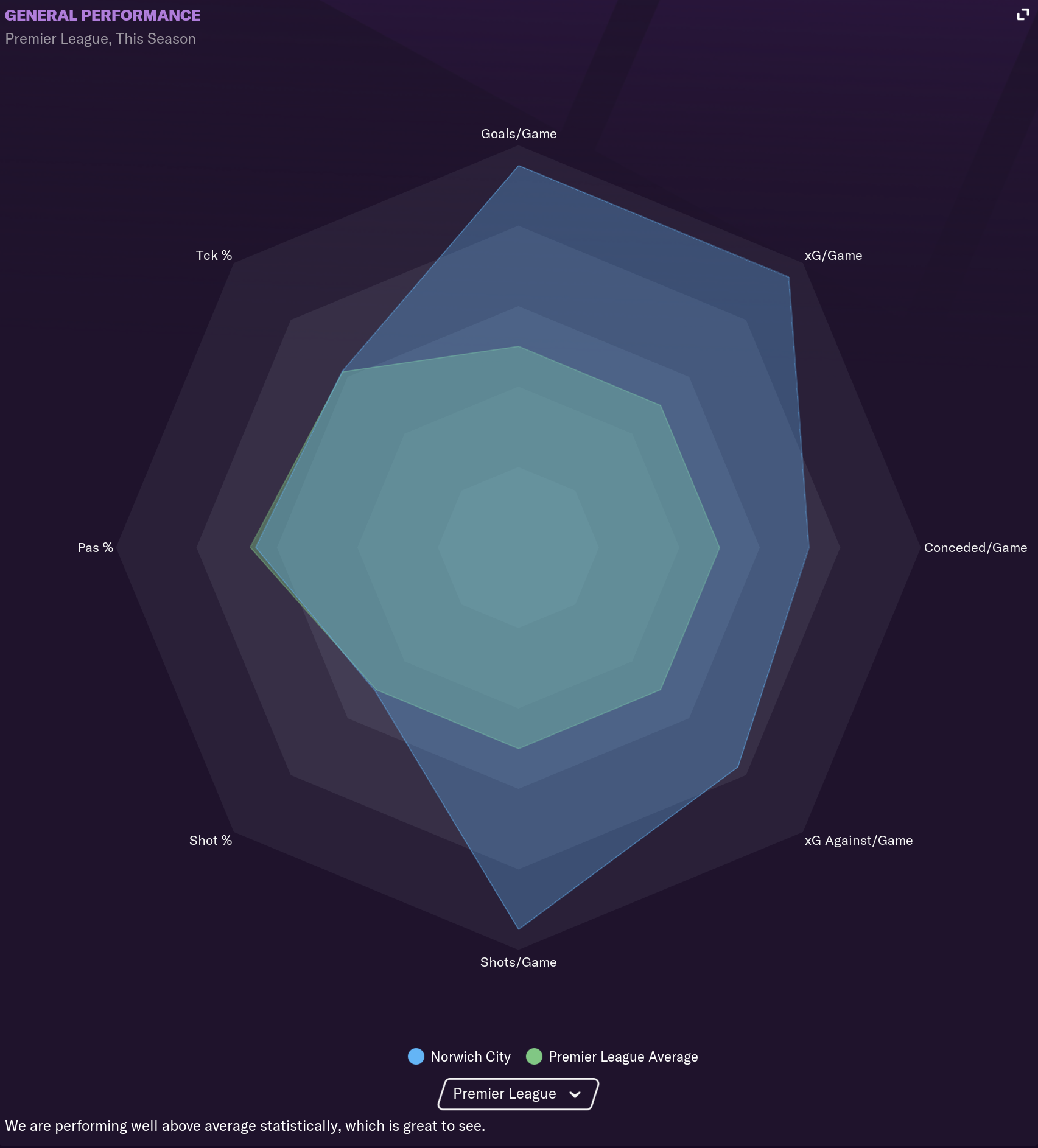 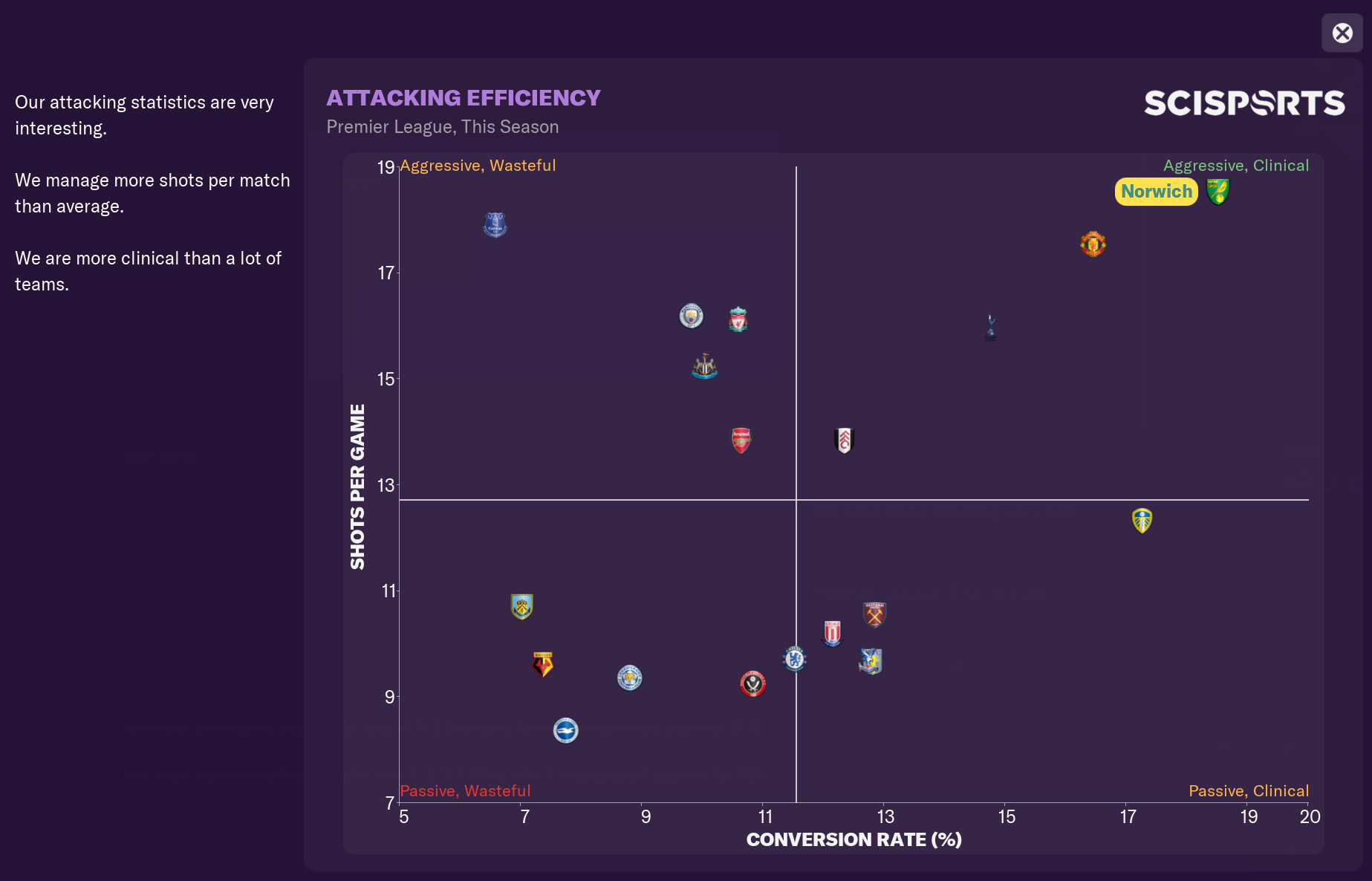 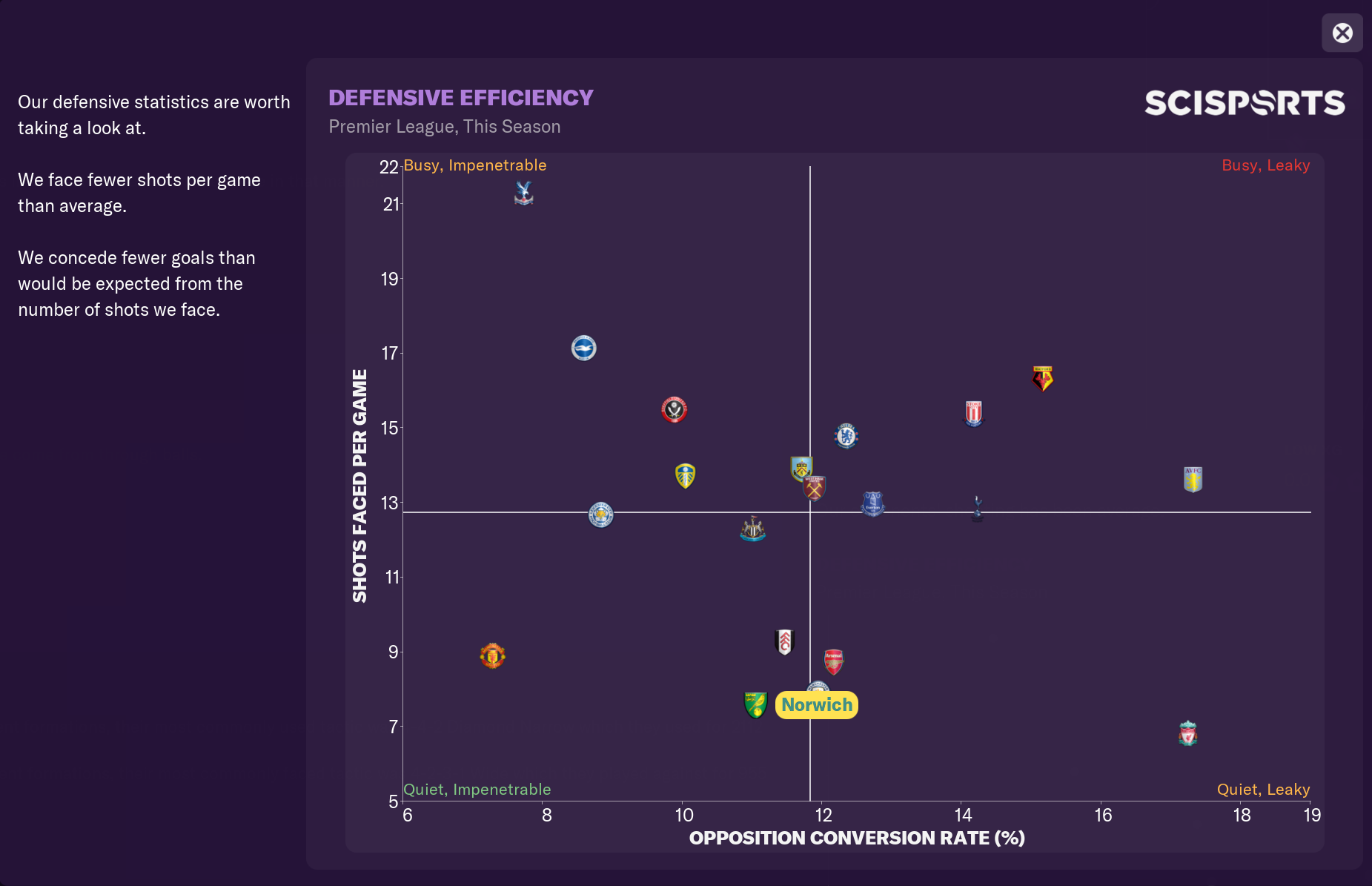 As a final update for this tactic, we have actually today (03/04/2021) just completed our final ever season with Norwich on Twitch now using this tactic. The final season went unbelievably well winning a Domestic Treble and being exceedingly close to a quadruple missing out on the Champions League by penalties sadly.

The team itself had a crazy year especially domestically going unbeaten in all domestic competitions and also only losing 2 games all season across every single competition the Norwich team took part in. The side also had a phenominal record in the Premier League equalling Man City's 100 pts record and also equalling the goals scored record of Aston Villa from the 1930s of 128 goals scored in a league season. Overall the team did really well using the tactic and you can check it out below: 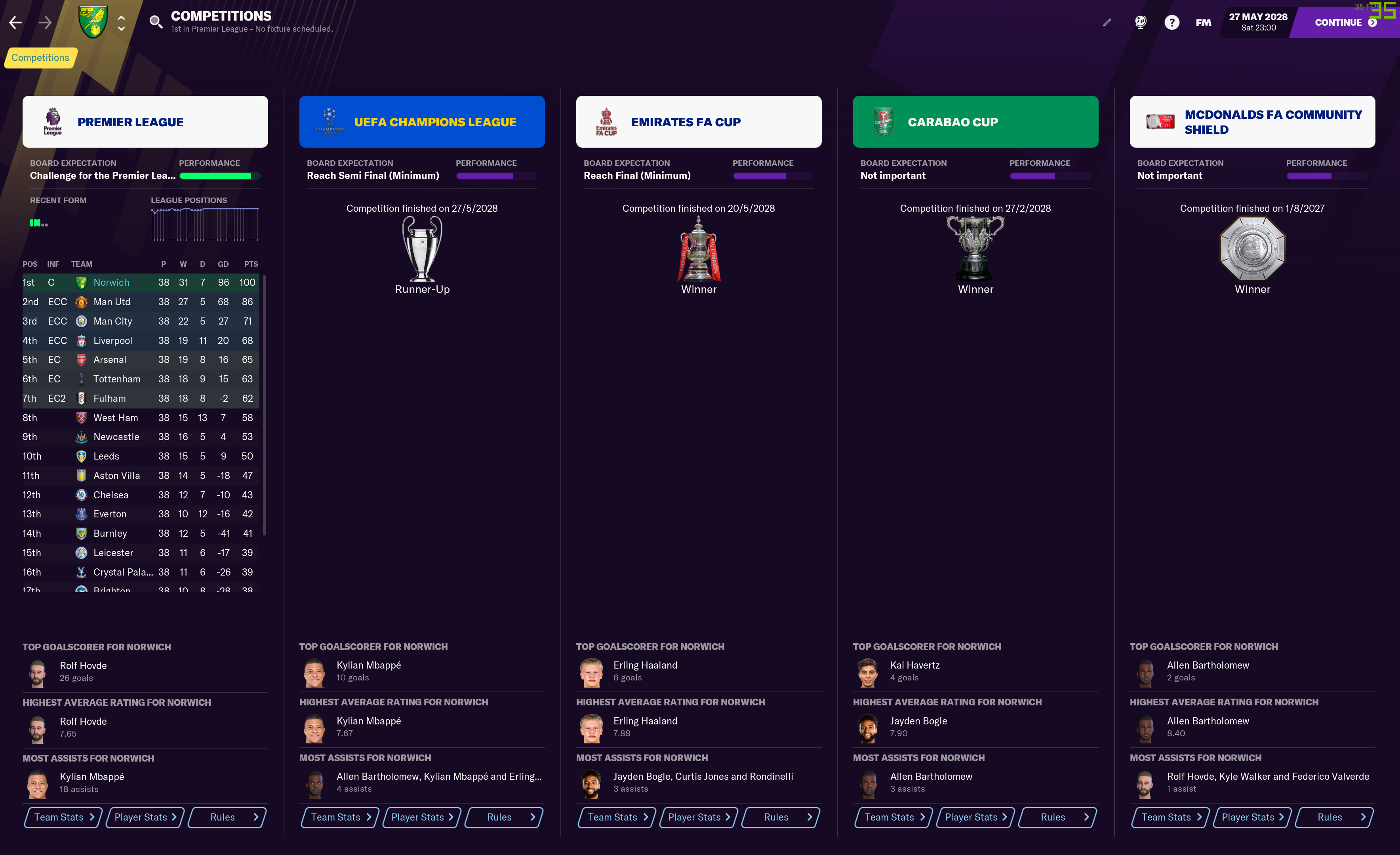 After the success with Norwich, I also tested this with Arsenal in a fully simulated test season in the Premier League and also West Brom so we could get a test at a different level of team, both one who is a decent Prem side pushing the top 6/4 and one who is a very poor side expected for relegation. You can see how Arsenal mainly lined up below: 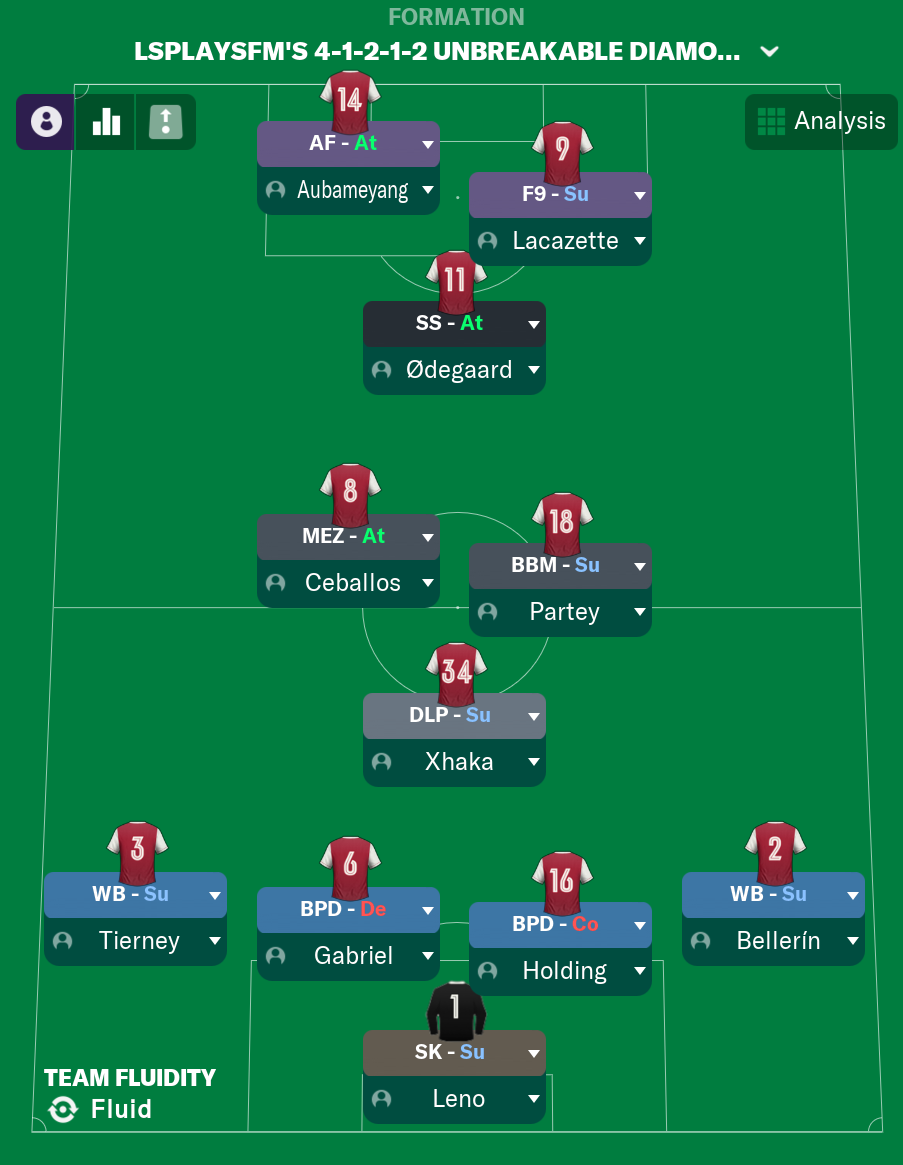 Arsenal were predicted to make the top 6, yet the team finished far higher than expected winning the league and hitting a record 102 points in the Prem and an 87% win ratio as well! On top of that the team also won the FA Cup, Europa League and Community Shield giving them a quadruple (or more so a treble). Its wasn't just the squad though which performed well, but individually, Bernd Leno had a crazy season keeping 25 clean sheets in the Prem and Odergaard managed 20 assists and an average rating of a 7.50. You can see quite how Arsenal got on in their competitions and the League below: 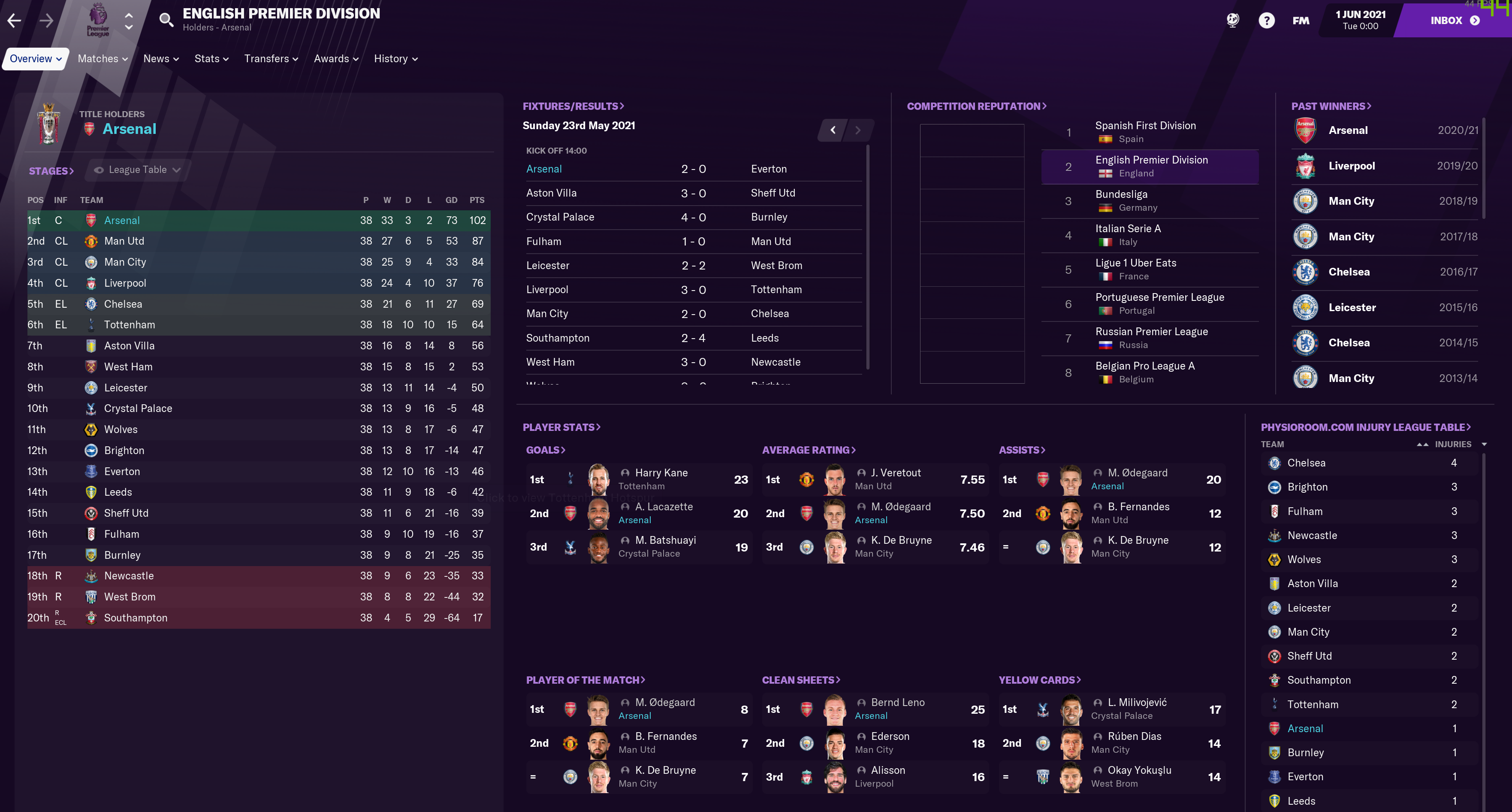 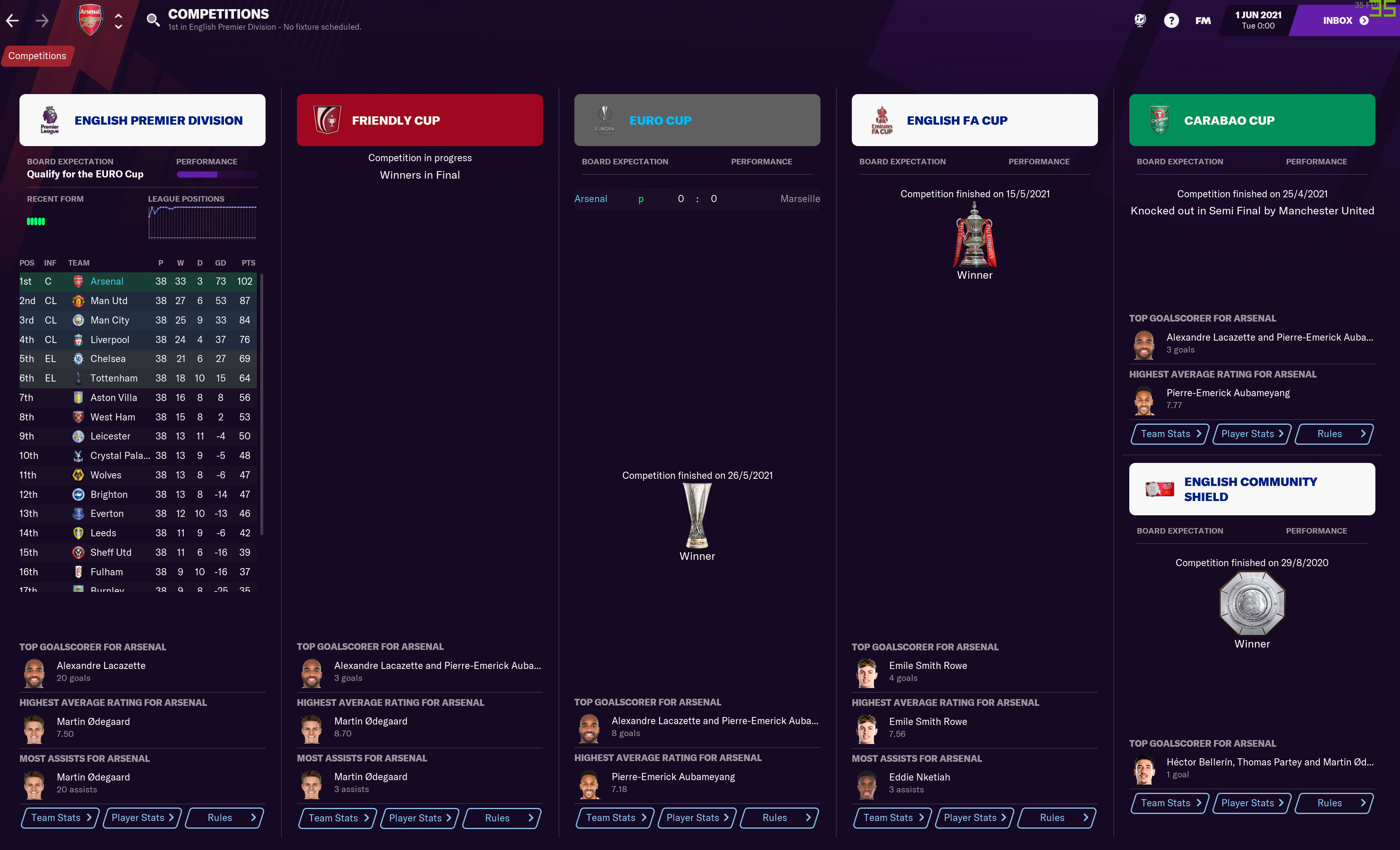 We come to the final team in West Brom. Very much relegation candidates predicted to finish last at 1000-1 odds. Them being so poorly rated was a big reason why I wanted to test them so we could see how a poorer side could fare with this tactic. West Brom's side would line up something along these lines when using the tactic. 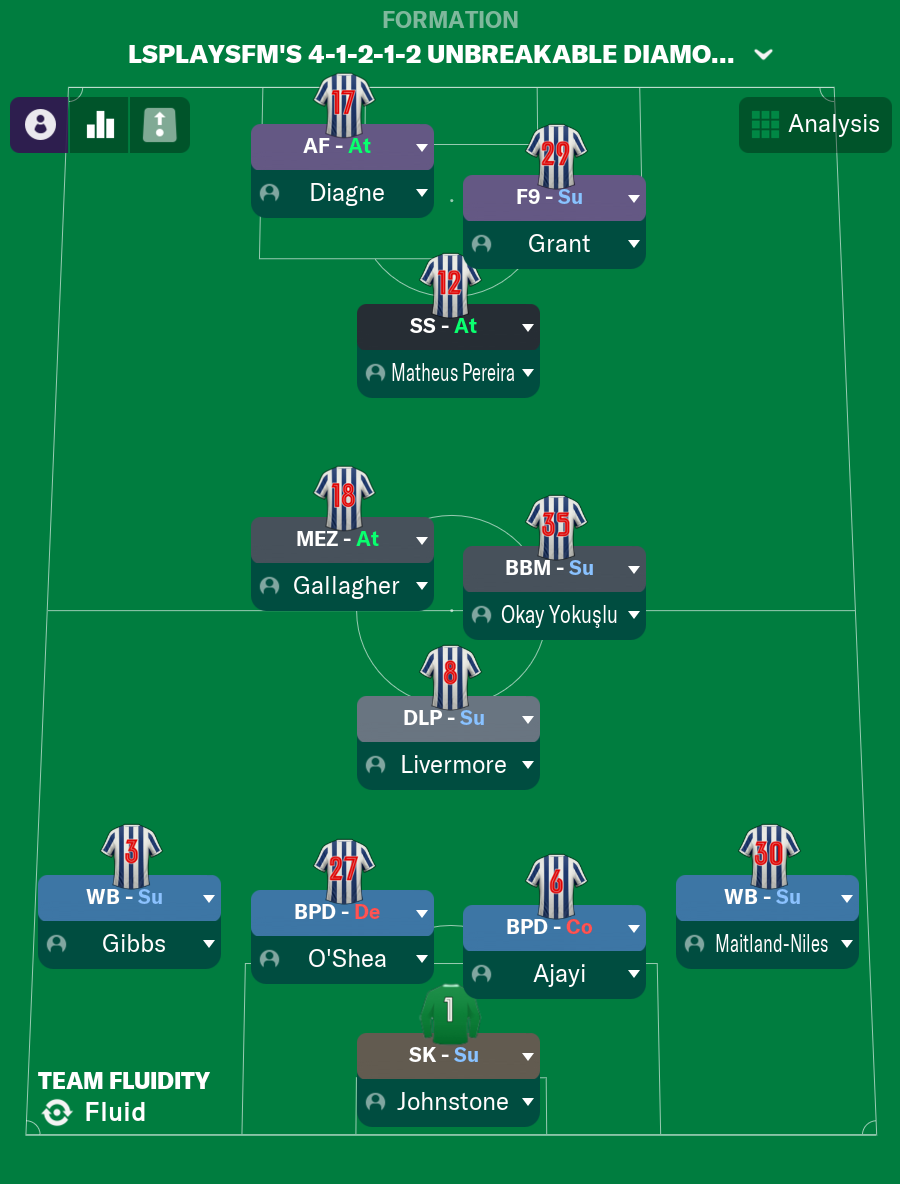 With this tactic, they smashed it in the Prem, finishing up in 6th securing themselves European football in the process. They managed 59 points in the Prem, only 13 off of the top 4! They also had the 5th highest goal scoring tally and 7th best defence in the league as well which for a side as poor as West Brom is very impressive! They also had the joint golden boot winner in their striker Karlan Grant which is crazy considering he can’t score IRL! You can see exactly how the side got on below: I have also received some screenshots from other users who have used the tactic in their own saves. One user who decided to test the tactic with Liverpool before using the tactic with them in their own save, you can see below just how well the side got on winning a Treble with the Premier League, FA Cup and Champions League (and maybe even a quad if you include the Community Shield)! Again highlighting just how effective the tactic really is and how dominant it can be. Check out the images below: 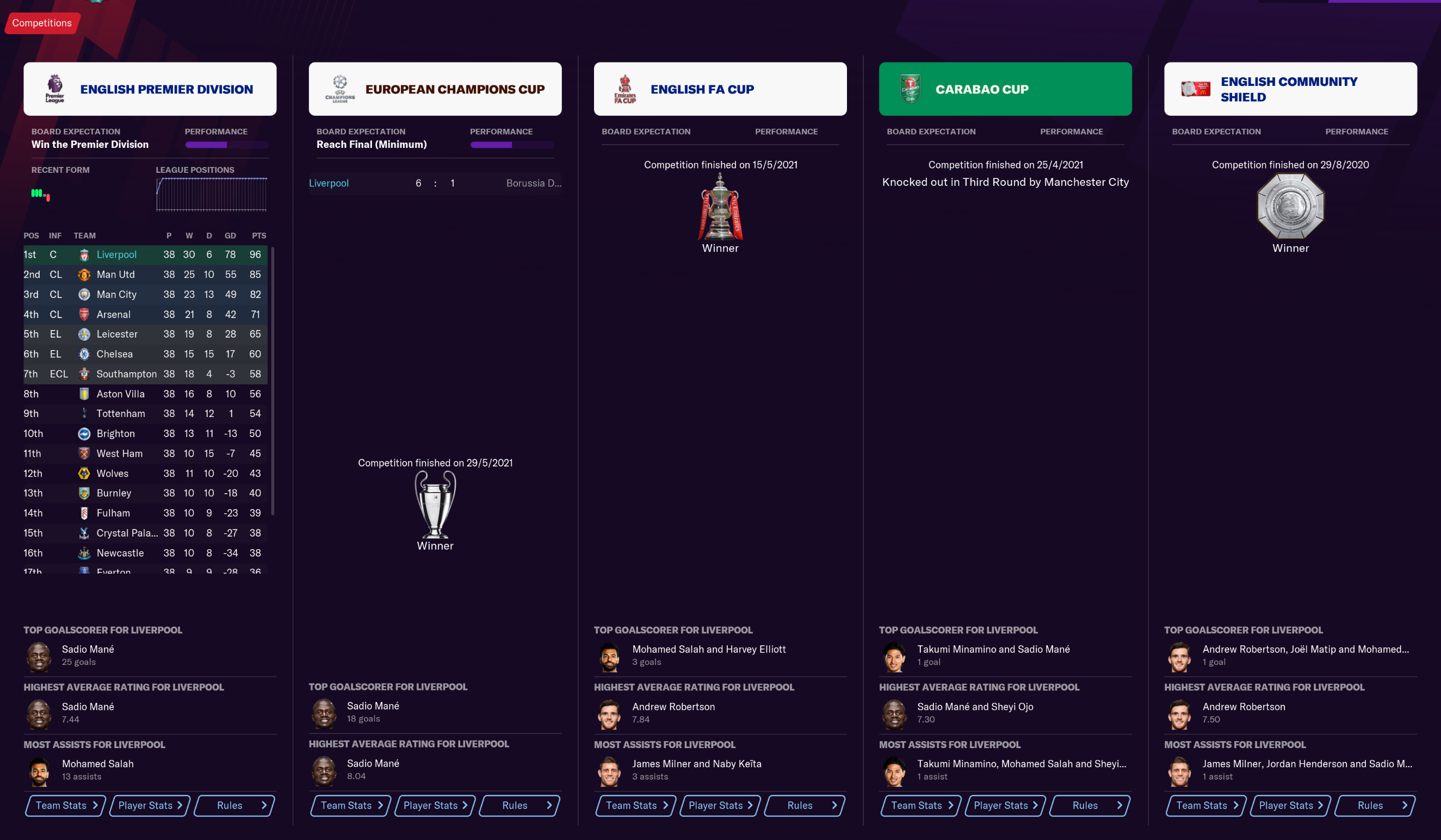 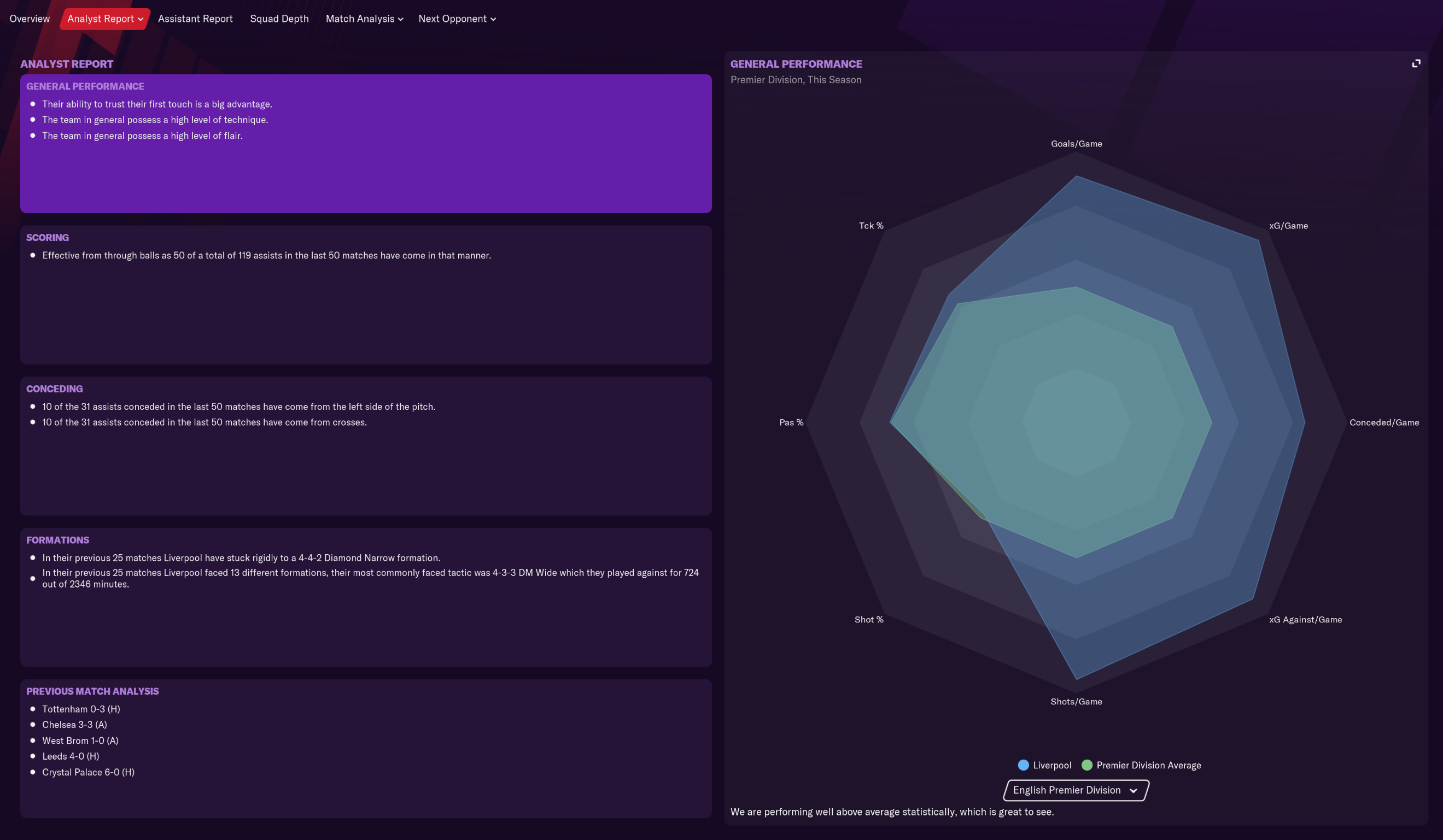 Another example a user has sent over to me was in a Sporting CP save in Portugal where their side absolutely dominated Portuguese football winning a domestic treble in only season 1 despite not having won the Liga Nos since 2001/02! The team blitzed their opposition hitting 87 points in 34 games, 1 point off of Benfica's record 88 and they also managed 83 goals and only conceded 22. They also kept 16 clean sheets in their 34 league games and won both the domestic and league cup as well. Overall another very successful season. Check out the images below: 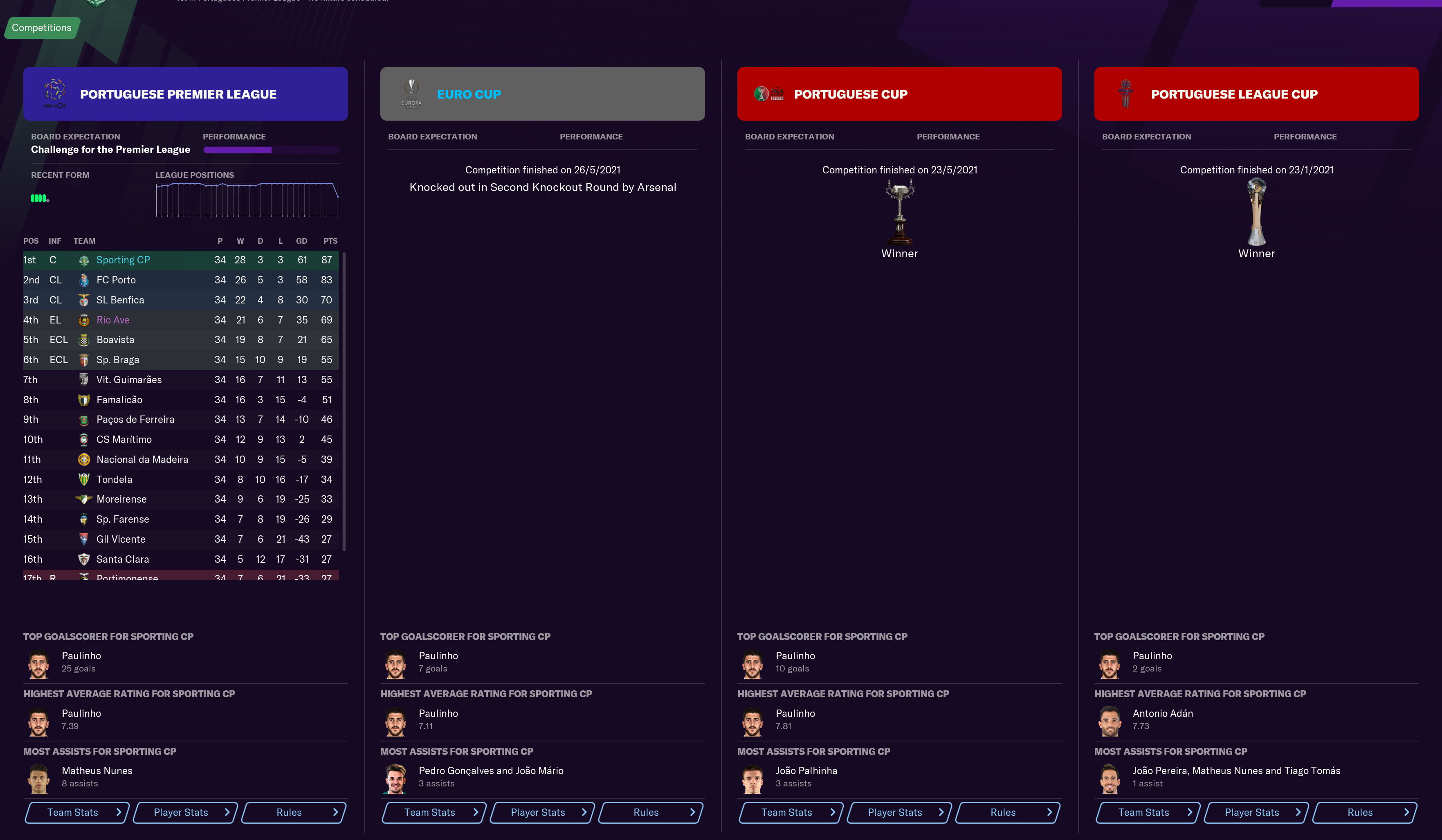 Overall that is how the tactic performed in these various tests, and clearly it did very well indeed.

Finally, as mentioned above with using this tactic you can find me over on YouTube where I make plenty of FM21 content such as FM Tactics videos and much more. If you'd like to check it out then just use the link below and make sure to hit that Subscribe button.