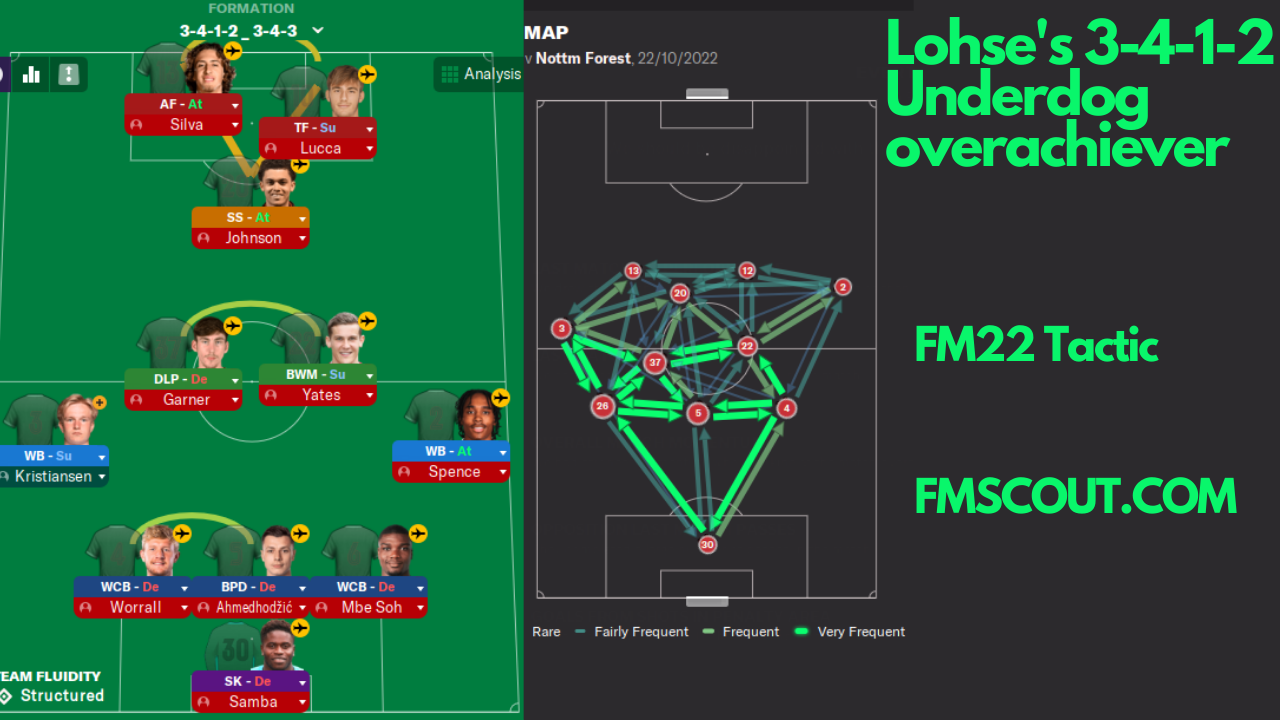 Hello and welcome, I am back again with yet another tactic! This time we are looking at an underdog 3-4-1-2 tactic tested with a newly promoted Nottingham Forest side which were touted to go down as dead last but ended up almost getting European football beating all the odds and data indicates we should've been even better than we ultimately were!

Firstly some context just to show how big of an underdog we truly were going into this season. 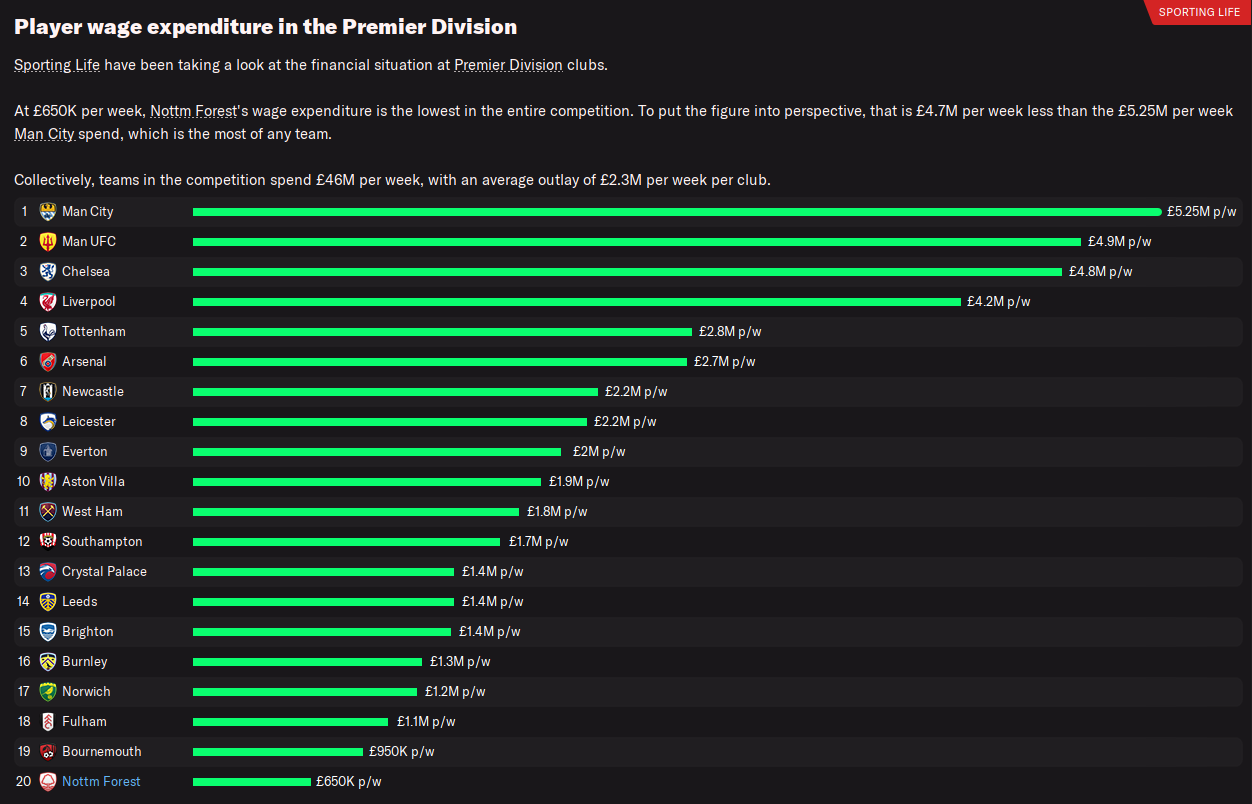 so by the numbers and media prediction of 20th we should be heading straight for relegation, however we managed to finish 10th only a victory from 8th. 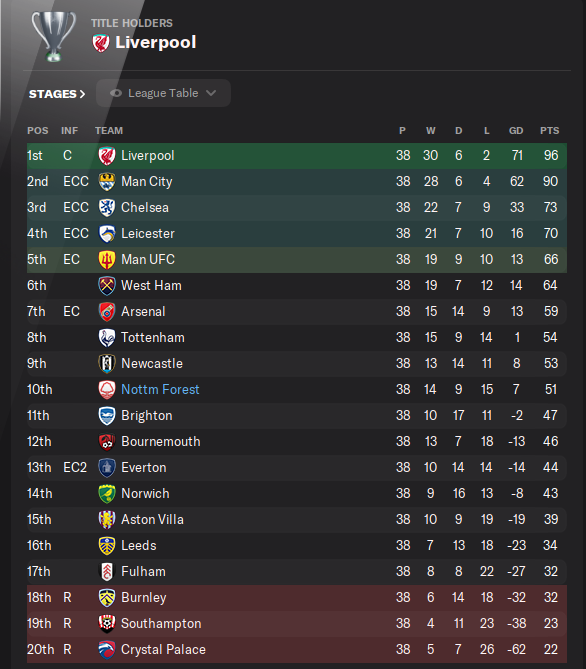 The formation that got us there 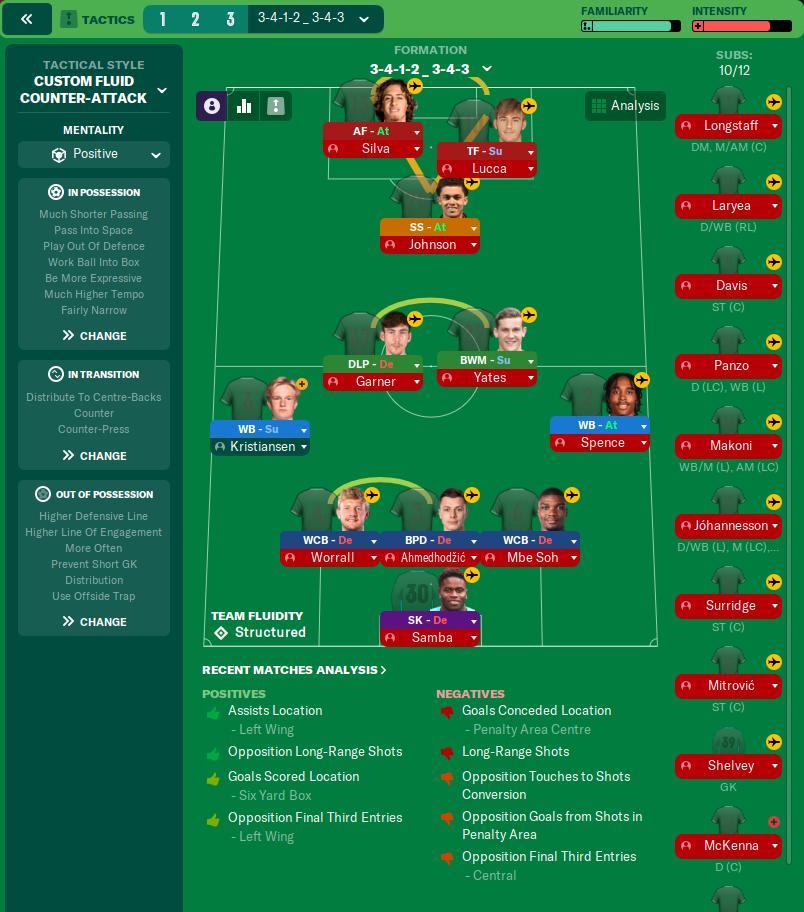 we retained most of our players from the championship such as Brennan Johnson, Djed spence, Yates and Garner along with most of the defence. But we also brought in Fabio Silva (for £2mil!) and Later in the season Lorenzo Lucca.
The formation is a 3-4-1-2 with the wingbacks instructed to be as wide as possible and let the DLP dictate play which Garner did really well he had an average rating of 7.4 from 32 games. the Target forward moves into channels and makes himself available for passes from the SS, DLP and particularly the right Wing back. We have a positive mentality for most games, however, against harder opponents away like city, Liverpool, Man UFC I switched mentality as the game progressed mostly to balanced but at times also cautious. You're probably thinking I'm a bit bad for mostly having an offensive approach despite being massive underdogs. But I believe in the ability of my players and I always want to try and play our ball despite the odds. 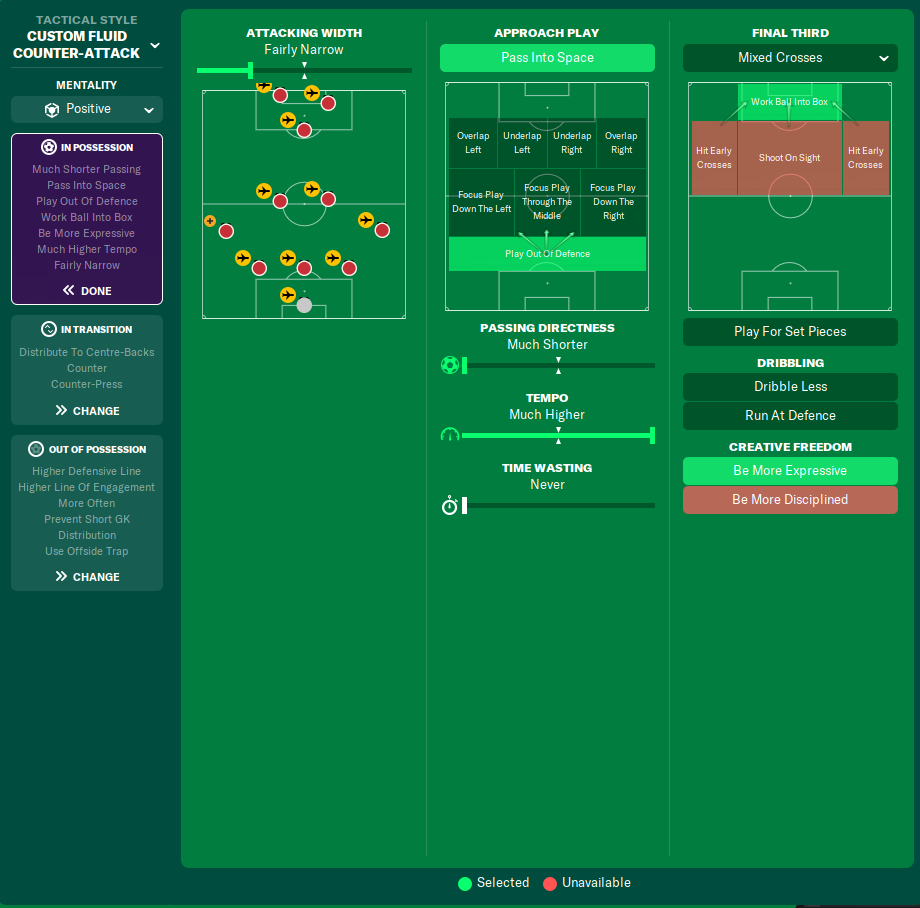 I started out playing default passing directness and tempo but I just found much shorter passing and much higher tempo to be better it creates better football with lots of one touch passes but at the same time very progressive and vertical passing which we like cos it splits the oppositions defence.
In transition: 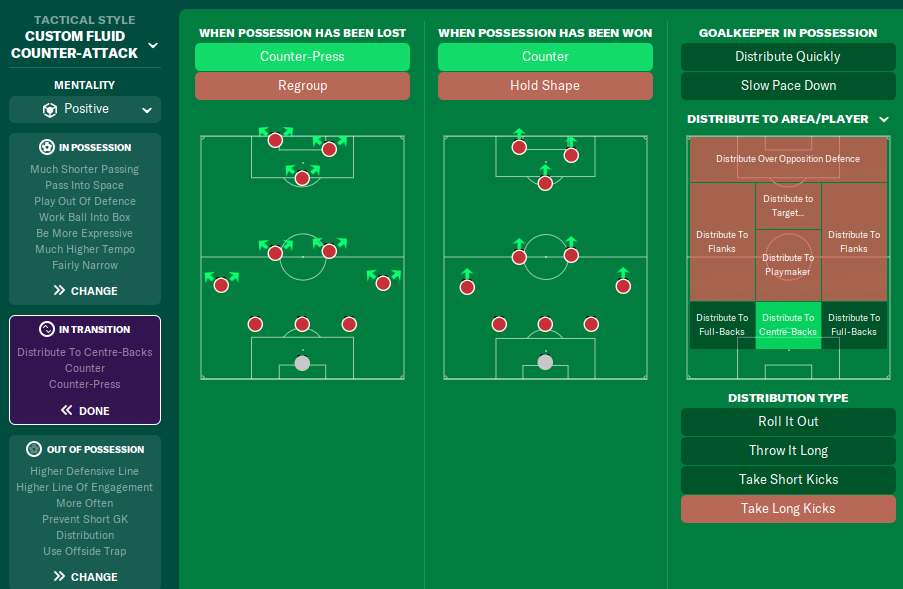 We emphasise the playing out from the back by distributing to the center-backs, however, if you find your opponent closing down your short options when building from the back and its creating a lot of pressure I went over to distributing the ball quickly with long kicks aimed at my target forward.
Out of possession: 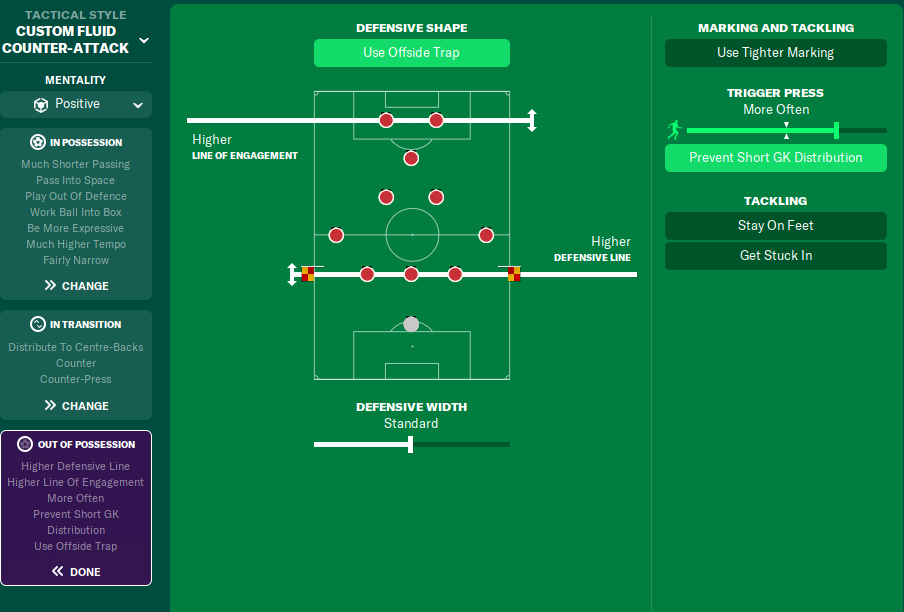 its really important when using a 3 at-the-back system that you do not use the force opposition outside because that is were the structural weakness of the formation is due to using wingbacks. Either force them inside or keep it at standard.

Here are some passing maps of the tactic: 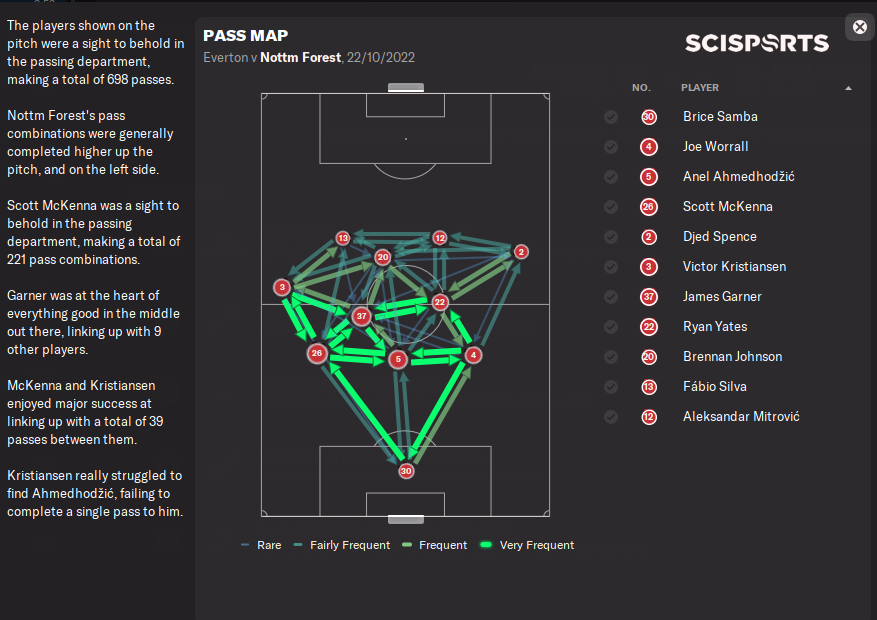 I mentioned earlier that we perhaps should have finished higher and the data certain suggests so! We also created about 1.6 XG per game which I think is quite decent for a newly promoted underdog. According to the XG table we should've finished 5th! 5 places over our actual finishing place. This means we actually underperformed massively but it also shows the potential of the tactic! 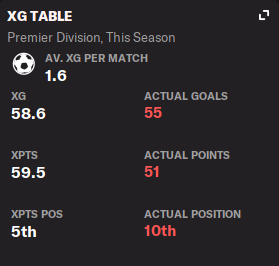 What has let us down is evidently our conversation rate unfortunately as seen below.
We had plenty of shots

but a very bad conversation rate

Defensive efficiency shows we were really solid landing in the "Quiet, impenetrable" defence zone which is impressive for an underdog such us 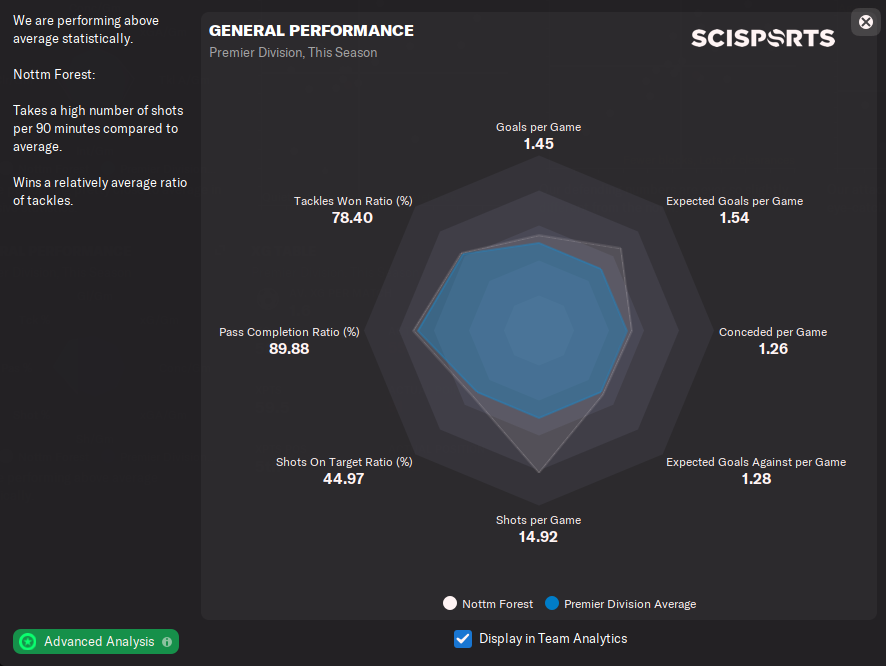 game a against 2nd place finishers, Man City - a game which we dominated yet still lost, this happened a lot even against bigger sides. We beat Tottenham 4-1 in both games of the season as well as drawing both games vs liverpool, beating Arsenal both games. And generally being competitive in most games. With a bit more luck and not underperforming our XG by the margins we did we definitely could've have finished top 6. But in all in all I think its a testament to the solid foundations this tactic provides. With a better squad this could definitely win the league I reckon.
That was the last of me for this time - I hope you enjoy the tactic as much as I do