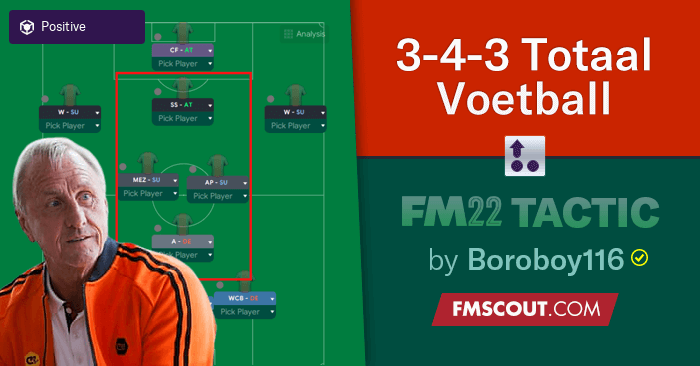 
It’s no surprise that these great coaches and managers have influenced one another when creating their own philosophies and principles of play. One can trace this lineage back to Rinus Michels who on paper people might discount as a great manager even though he won 13 trophies but this is dwarfed by modern coaches such as Sir Alex Ferguson, Jose Mourinho and Pep Guardiola.

However, defining greatness is complex and there’s no question that Rinus Michels changed the game. He was a firm believer in total football and his Dutch side is arguably the best side not to win a world cup. Rinus, however, was not the creator of total football which can be dated back to Jack Reynalds and the great Hungarian side of the ’50s who played with great fluidity and versatility.

In fact, Rinus was not even the first coach to adopt total football in the Netherlands that distinction falls to Ernst Happel who led Feyenoord to the 1970 European cup final and thus became the first Dutch team to lift the trophy.

Happel is undoubtedly one of the greatest managers of not only his generation but of all time, his achievements are criminally undervalued and he is rarely spoken about compared to his peers like Shankly, Michels and Sacchi.
When talking about total football Happel’s role is often overlooked and there can be no doubt about his influence on helping to shape the modern game. He was a trailblazer when it came to analysing his opponent which led him to conquer European football.

Rinus Michels would take many of the principles and concepts used by Happel and apply them to his Ajax team and thus the legacy of Ajax and Total Football began. It was said Rinus Michels perfected the style with Cruyff taking it to new heights during his 10-year managerial career with Ajax and Barcelona.

Johan Cruyff was a pioneering coach who believed in playing fluid and attacking style of play, with all players responsible for attacking and defending. Cruyff instructed his team to play with intelligence, freedom and enjoyment producing beautiful football with extraordinary results.

Guardiola was key to the success of the system, he was the pivot that allowed the rest of the team to roam around him. He was instructed to take the ball and give the ball dictating the tempo of play. Cruyff also instructed his players to always give the man on the ball two passing options, thus creating triangles all over the pitch to circulate the ball at ease.

Cruyff believed that playing with 4 at the back was a waste. Since most teams played with 2 strikers, having 3 defenders was enough to outnumber the opposition. The spare defender allowed Cruyff the luxury of having one more midfielder forming the diamond and one more striker. Thus creating the 3-4-3.


Cruyff's principles and system were all about winning in the most attractive way possible. In order to achieve this, he created the 3-4-3 with the aim of creating overloads to move the ball upfield before eventually scoring. His teams were fluid and would interchange positions regularly throughout a game.

His 3 central defenders along with the goalkeeper would easily outnumber attackers which allowed them to play from the back and build attacks from deep. Cruyff used Koeman as the libero he was able to step into midfield with his technical skills and switch the ball to the flanks when required. The outside CBs were fullbacks who could offer width. His midfield diamond would dominate the centre of the pitch allowing for intricate passing networks. Perhaps the greatest tactical innovation Cryuff used was the false 9 role given to Laudrup.

Laudrup was a technical and intelligent footballer who was a fantastic playmaker who often played in the 10 role. Laudrup embodied the positional style of football Cruyff craved, now operating in the false 9 role he was able to create space for the wingers and SS to exploit. He offered the midfield even more numerical superiority and he would often be found in line with the wingers and SS. 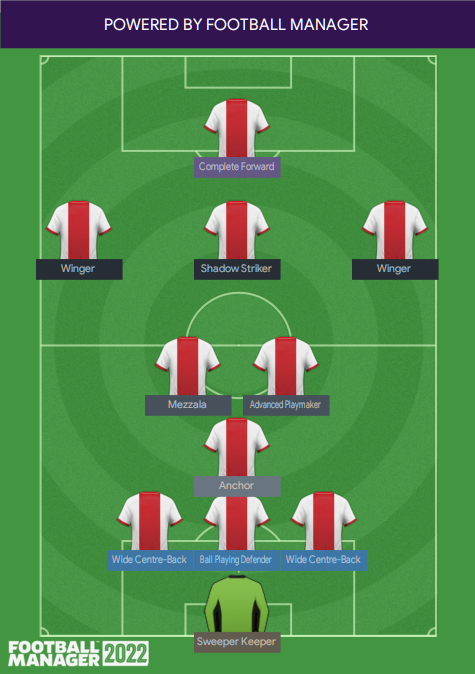 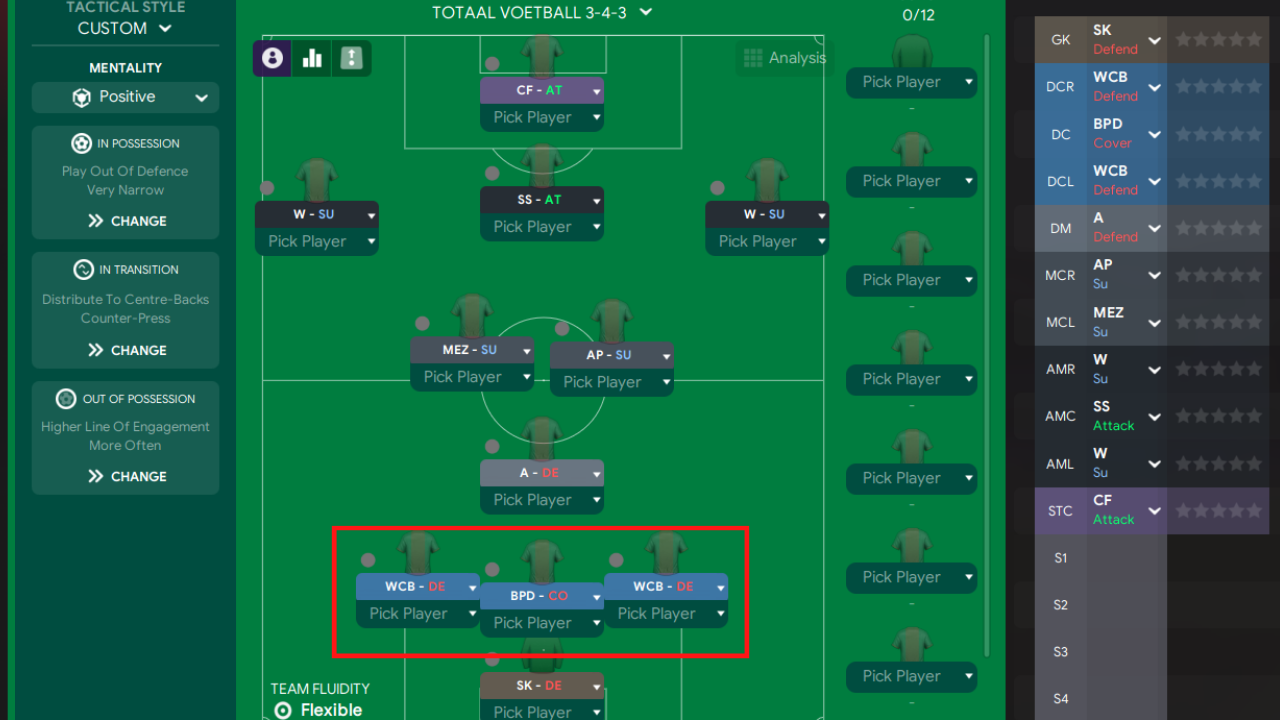 Rather than focusing on the name of the roles used by Cryuff such as using Koeman as a Libero, I am more interested in the movement patterns of the players and how they act and interact with one another.

Two wide centre backs flank a BPD on the cover duty to help create the staggered lines Cruyff craved. The wide centre-backs act like the hybrid fullbacks by pushing wider in the possession, whilst the BPD can bring the ball out of defence creating a diamond with the GK at the base. This allows the team to easily play out from the back and advance the ball up the pitch quickly by ensuring plenty of passing options for the ball carrier. 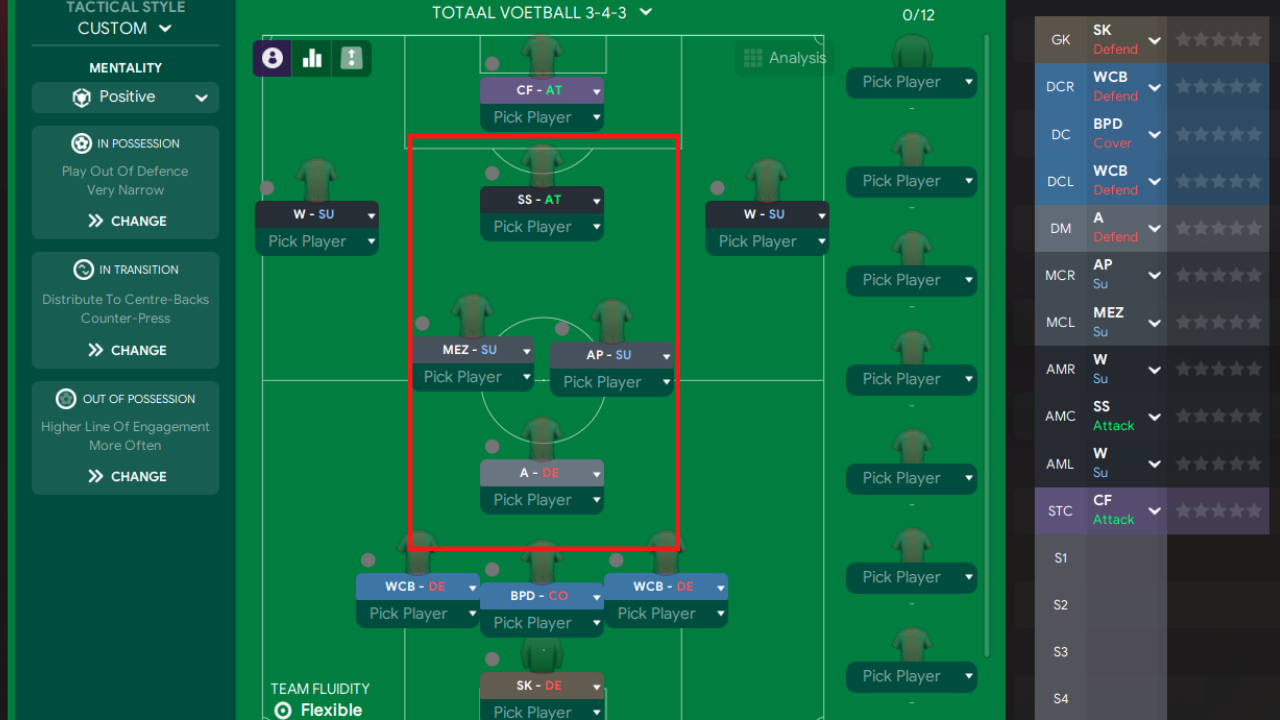 At the base of the midfield quartet is the anchor this is the Guardiola position, their sole purpose is to hold position taking the ball and then passing it on allowing everybody else to rotate around them.

Ahead of the anchor is the mezzala who is going to drive into the half spaces and be more of a dribbler committing opposition players before passing the ball. Alongside them is the advanced playmaker they will be the most creative player in the diamond influencing play high up the pitch, and playing key passers through the lines.

The tip of the diamond belongs to the shadow striker who will look to break the lines, getting in behind the opposition's defence. Not only that they will have complete freedom to roam across the pitch looking to find space in the channels and half spaces creating plenty of opportunities to overload the opponent.


Unlike Cruyff I am using the complete forward instead of the False nine, this doesn't mean the player won't drop deep it just means they will a combination of everything as you might expect from a complete forward.

The wide players as explained below are traditional wingers but are played on the opposite side to their strong foot. This allows them to stretch the pitch, driving to the byline before cutting the ball back. You can also encourage them to cut inside more by training them to cut inside from the flanks.


One of the principles of total football and that of Cruyff was to make the pitch as big as possible with the ball, one of the first things you will notice about the tactic is the limited TI’s there is no need to go overboard with the instructions to achieve the style of play you want.

Rather than use the extremely wide option I have instead used very narrow, but complimented it by using standard wingers as they are hard-coded to stay wider. As Cruyff liked his wide men to come inside I have used players with the strong foot being opposite to the side they are playing on thus making them act more like inverted wingers, with the added benefit of getting to the byline for cutbacks.

This ensures the opponent still has to cover large distances and as a result, there is a higher chance of gaps appearing within their lines. Cruyff also wanted his players to remain close together to ensure they could dominate and move the ball, as the man on the ball would have at least 2 passing options. 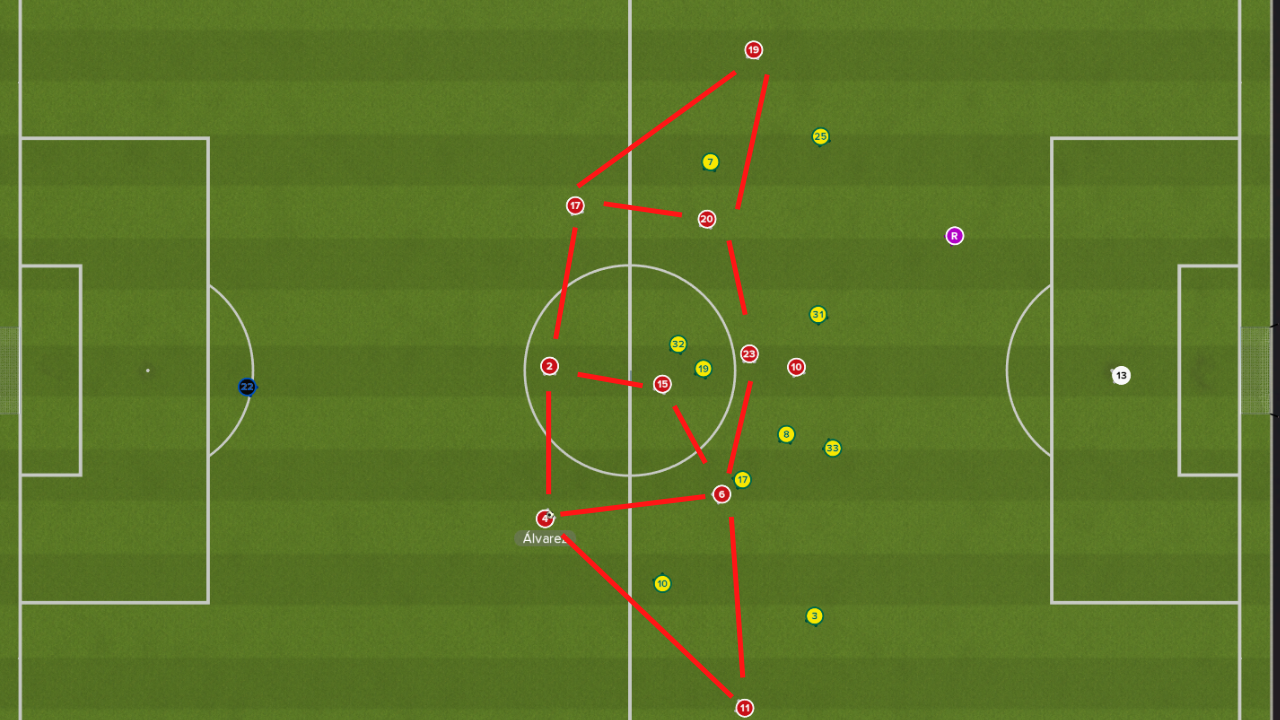 As the tactic is deep-rooted in the total football philosophy it's therefore key that players will express themselves and move freely from their positions, these interchangeable movements cause all sorts of problems for opposition especially when they try to use a man-marking system. I, therefore, instructed players to roam from their natural positions. 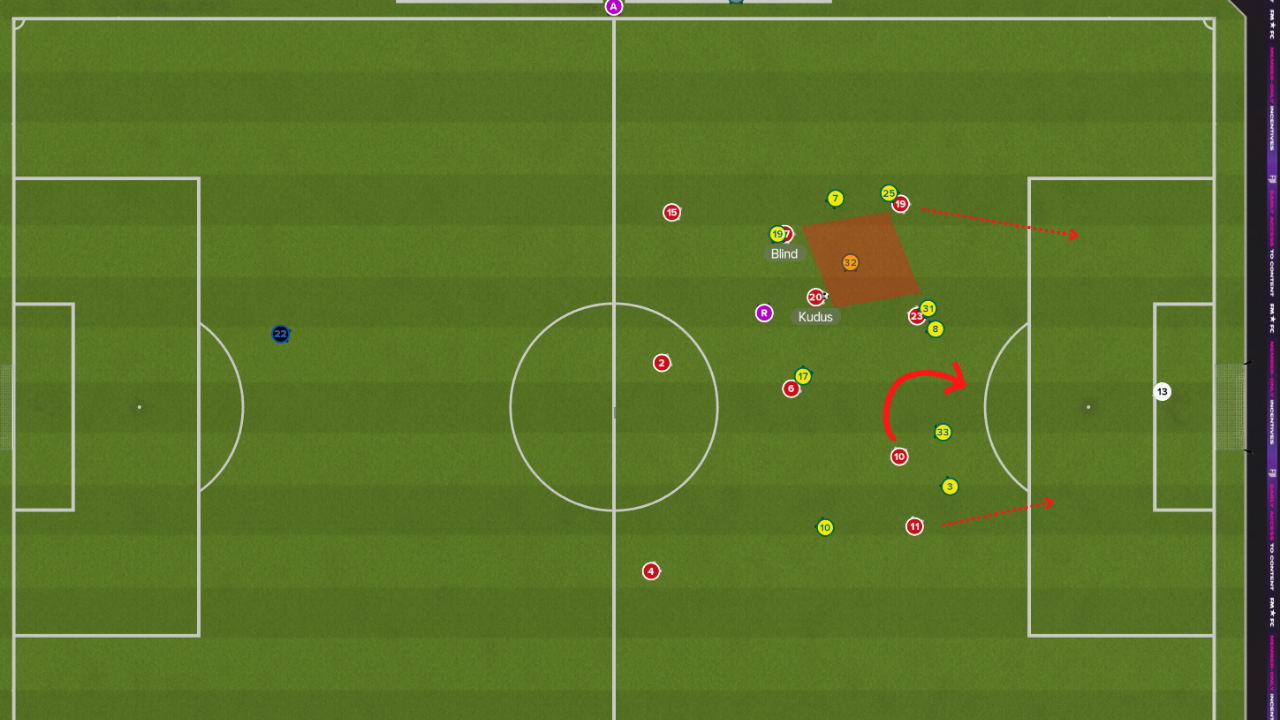 
Pressing is at the heart of a total football system, the philosophy is opposite to that of when in possession with the aim of making the pitch as small as possible. To do this a high press is used along with higher lines in defence and engagement within a zonal system. 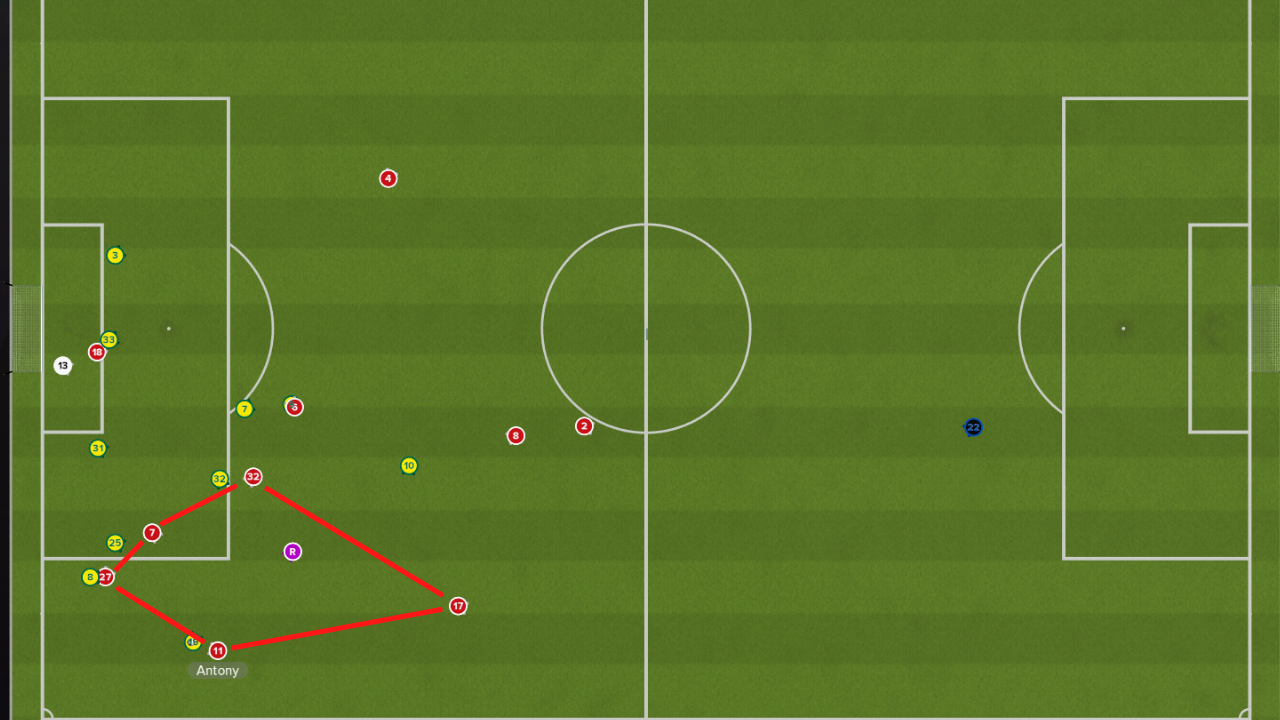 The aim of the high press is to cut off passing options and force the opponent into a mistake, either a direct turnover due to the pressure applied via an interception from the risky pass or from them kicking the ball long.

The team works in unison forming a compact defensive block, enabling them to cut off one side of the pitch squeezing the opposition whilst simultaneous applying pressure to the ball carrier by surrounding them into a mistake. 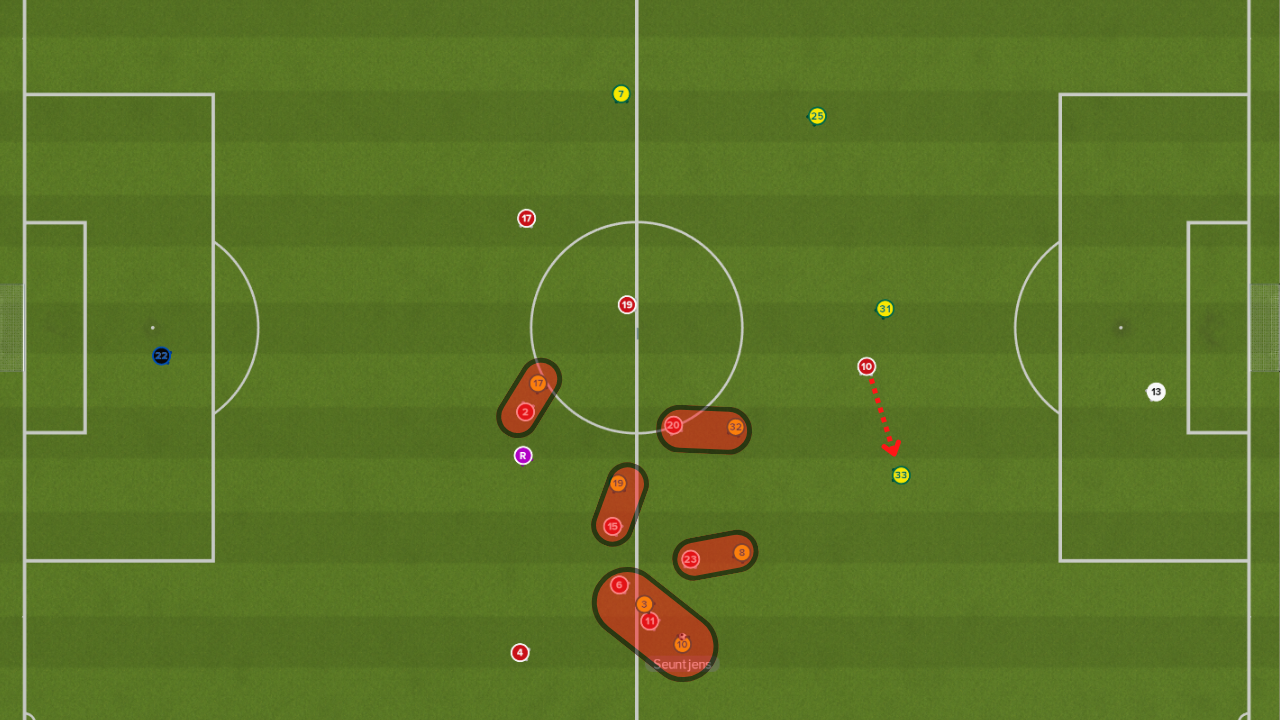 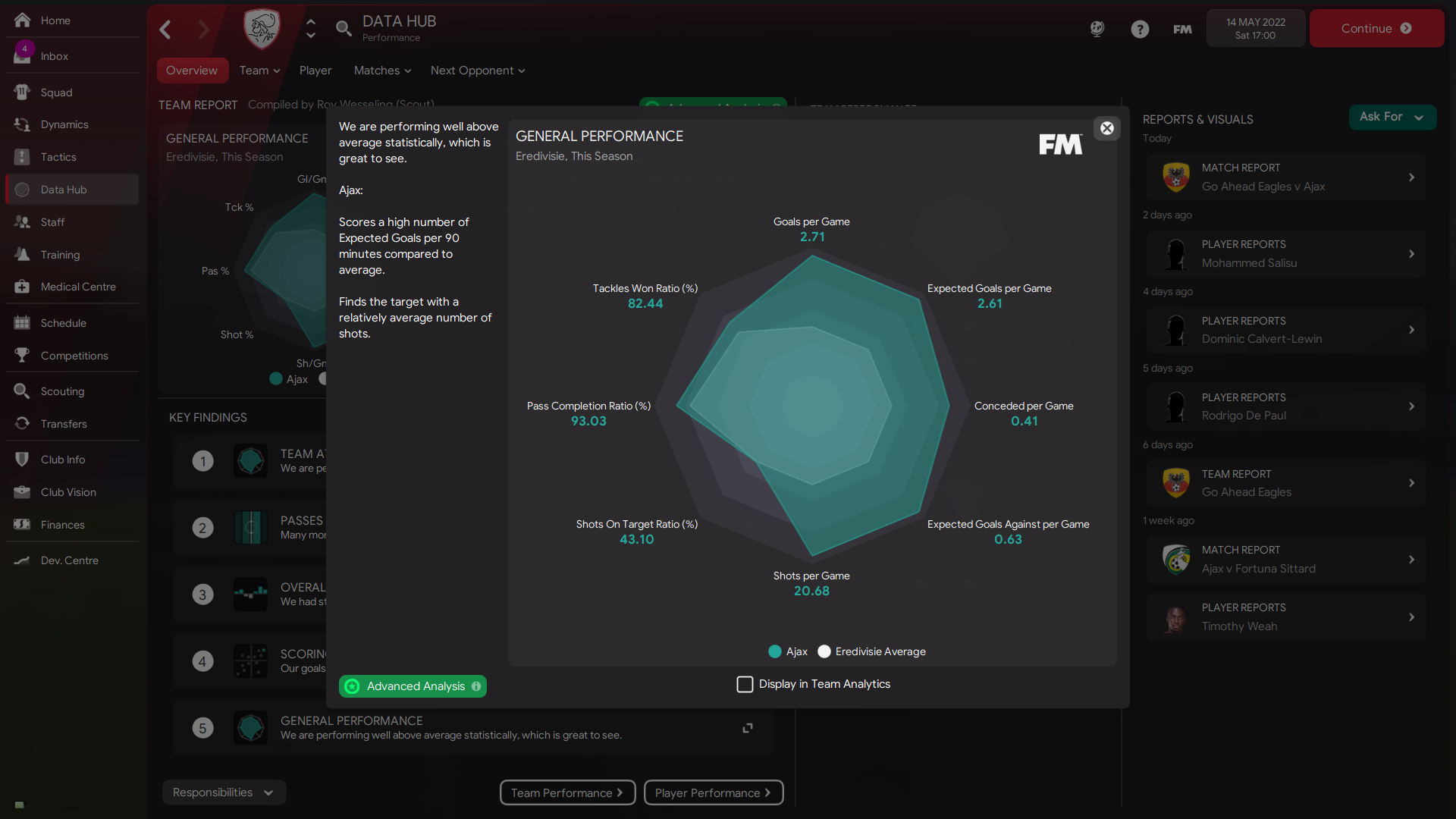 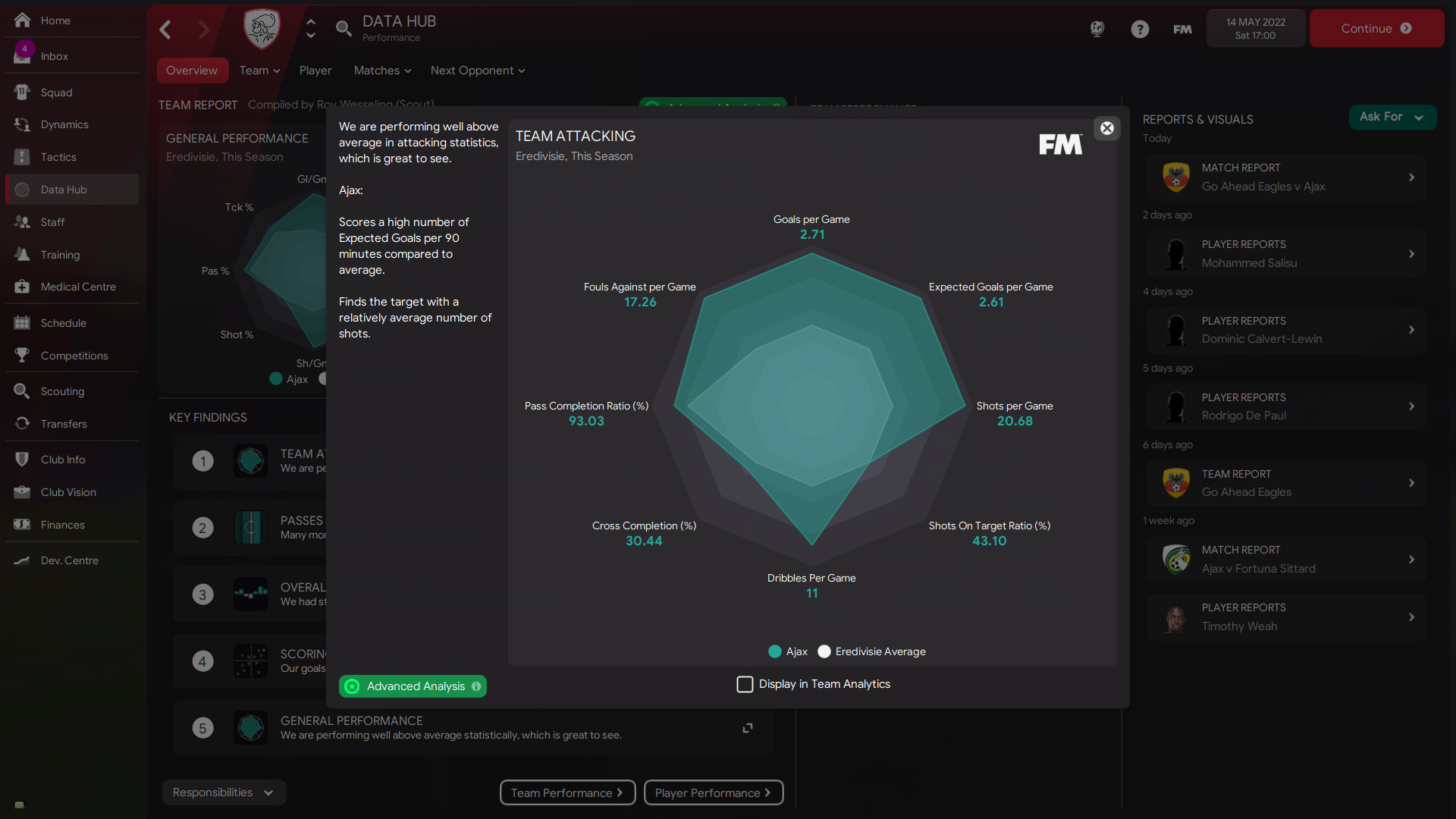 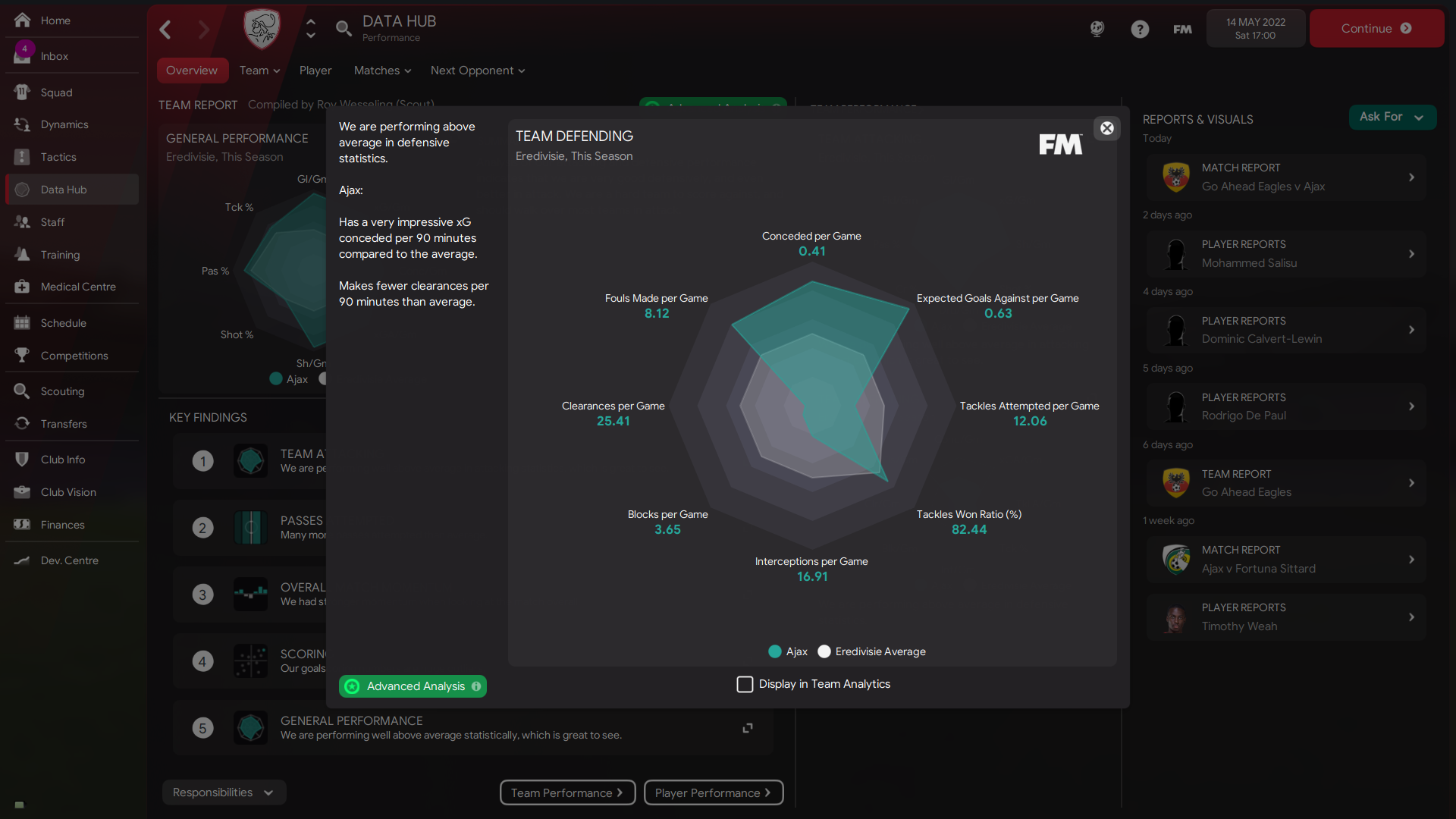