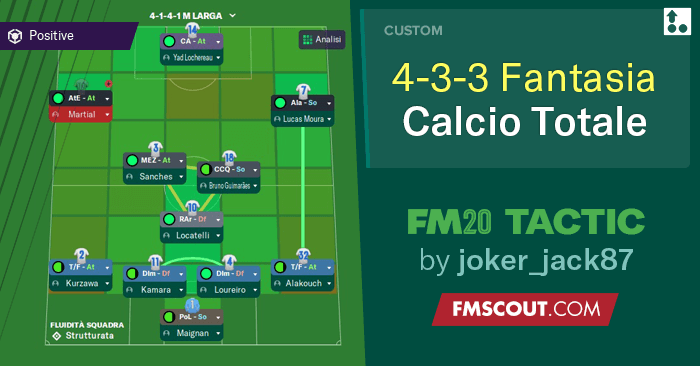 Good morning everyone, here is my personal tactic; the formation is my dear 433 with wings.

Currently used in Lyon and in 2 years I have won the Europa League and the French Cup and arriving in the semifinal champions.
The championship I have always followed PSG where I hope to pass the third year.

Fluid Fullbacks - Attacking: both set to attack, huge slips in attack with countless assists (even 20 from the left and 13 from the right)

Central: both set as Defenders that Set and to one of the 2 (possibly the one with the highest marking and concentration values, we will also set narrow marking)

Register Backlog - Defending: our pivot, skillful in closing when attacking us (tight marking and hard tackling)

Midfield with the pair Mezzala (Attack) and CCQ

External Attacker Attacking and Supporting Wing: this is the perfect pair, I don't like the double role very much, so I alternated them like this and the results are impressive


IN TRANSFER I NOTED THAT THE BEST BALANCE IS NOT DEFENDING, BUT SET THE TACTICS TO OFFENSIVE

IMPORTANT: IT IS NOT ADVISABLE TO ADOPT PLAYERS ADAPTED TO THE ROLES, BUT USE FUNCTIONAL PLAYERS AND WITH THE NATURAL ROLE, THIS IN MY WAY OF SEEING AND TRYING DOES MORE POSITIVE RESULTS

As always, let me know your impressions, even negative ones, maybe together we can make it even stronger, but I noticed that already in the medium teams like Lyon it does well, now I try it with the big names

1) Lyon (3 years) - Won Europa League in the second year and best placement in the league (2nd behind PSG)
2) PSG (2 years) - 2 Championships, 2 National Cups, 1 Champions League
3) Napoli - 2nd in the championship, eliminated in the quarterfinals of Champions League against Real (2 draws)


In my opinion, the tactic makes it, it is not THE DOGMA for all the teams but 80% I noticed from the careers carried out that it can be used anywhere; based on the teams chosen (between big and medium) the changes to make are few of my way of seeing and trying.

1) BBP change to DC
2) Full backs role change to support
3) In away games against giants like Real, at Bernabeu I used POSITIVE mentality and I drew 0 to 0 having more chances than Real, too bad to have made 1 to 1 at San Paolo and then I lost
4) From very wide to fairly wide (in attack)

For the rest I never touched anything else.


Includes set-piece routines for corners and free kicks (both attack and defense) !!!


Note: The text was in Italian & used Google Translate.