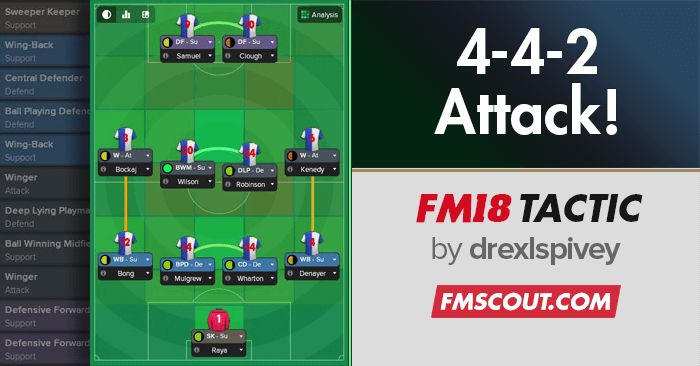 Hi, this tactic was created for Leicester, to be honest focused around Vardy, as I wanted an attacking tactic that would mainly benefit my wingers and strikers in attack. It worked very well, so I created another save with Blackburn. My target was to get into Premiership in 2 seasons and hopefully avoid relegation with ease in 3rd season.

It was better then expected, dominated both League One and Championship, beating Most Points in a Season record back to back, and finished 8th in 3rd season with largely the same first team players as in 1st season.

Goalie; Sweeper Keeper - Support(SK-S) <- This position can be changed to Goalkeeper Defend, my current keeper is better as SK-S
Defence; Fairly basic, have your best ball playing DC in BPD.
Midfield; Wingers are key in this tactic, your wingers need to be quick and have good crossing.
Strikers; I prefer one quick striker with one target man-ish striker. They should have good physical stats and work rate, decent crossing is also needed as your strikers will be assisting each other a lot. Second Season
Again won the league easily, almost got into FA Cup Final but lost to Arsenal in Semi-Final after beating Spurs and ManUtd in previous rounds.League records broken again. Third Season
A draw in the last game meant that I ended in 8th place but would've qualified for Euro Cup with a win. Your team needs to have good strikers and wingers for this tactic to work.

Take good care of squad dynamics, its really the key in this years version in my opinion. You should not have anyone that's unhappy or concerned, try to use your team leaders to take care of concerns from other players and get rid of unhappy/useless players.

Use standard mentality against much bigger/stronger clubs.