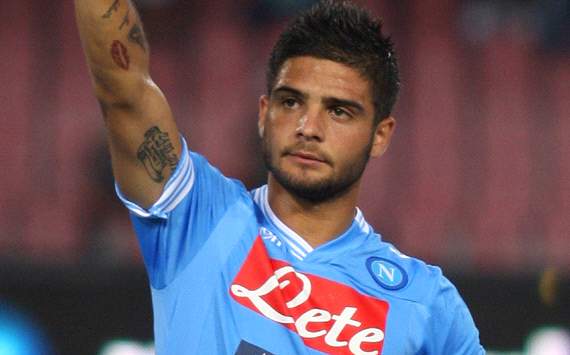 Liverpool have officially announced the signing of Italian winger Lorenzo Insigne from Napoli. The £14 million move comes just days after the failure to sign Nicolás Gaitán. Insigne, 22, has spoken of his delight at joining what he calls a "footballing superpower". Fans of Liverpool are relieved that the situation regarding Gaitán was resolved quickly and are excited by the prospect of Insigne, who #they believe is a bargain, something which Napoli fans can only agree with.. The Italian, who has earned one cap for his national team, was the subject of an ambitious, and quite frankly embarrassing bid by fellow Premier League side Sunderland and has also received praise from Arsenal manager Arsène Wenger. Many have labelled him as a "wonderkid" and it is important that Liverpool give him plenty of game time if he is to reach the heights that everyone is predicting for him. It seems like a lot of pressure for the player to carry but if he does manage to, he could well be the next big thing. However, he will want to take it one step at a time, to make sure he does not topple under the pressure. Liverpool seem to have a good buy here but will he live up to his expectations? Only time will tell.
Login to Quote

Jer
7 years
Some great writing LFC, and Insigne is an even better signing than what Gaitan was.
Login to Quote

LFC
7 years
Thanks for the comments guys.
Login to Quote

Neal
7 years
Insigne is a beast for me at Inter on FM 13, hope he does just as well for you

Jamesg237
7 years
I can't say I know too much about Insigne but everyone seems to be raving about him so I am sure he will do well. A great read so far so keep it up! YNWA!
Login to Quote

MJK46
7 years
i have never heard of this guy so I don't know if he is good or bad. Hopefully he preforms and you don't waste the 14m on what seems to be a semi panic buy.
Login to Quote

AlexSonwild
7 years
Superb signings m8. And incredible writing too, keep it up

kazza121
7 years
Heard a bit about Insigne , hope he is a inspired signing for you .
Login to Quote

The pre-season is always a good way for a manager to get a general impression of his squad, see his new signings in action and hopefully get some good results for the upcoming season. For new Liverpool manager Robbie Fowler, a very good impression will have been given from his squad during the pre-season. The team played seven friendly matches, with six of them being away, and lost just once. 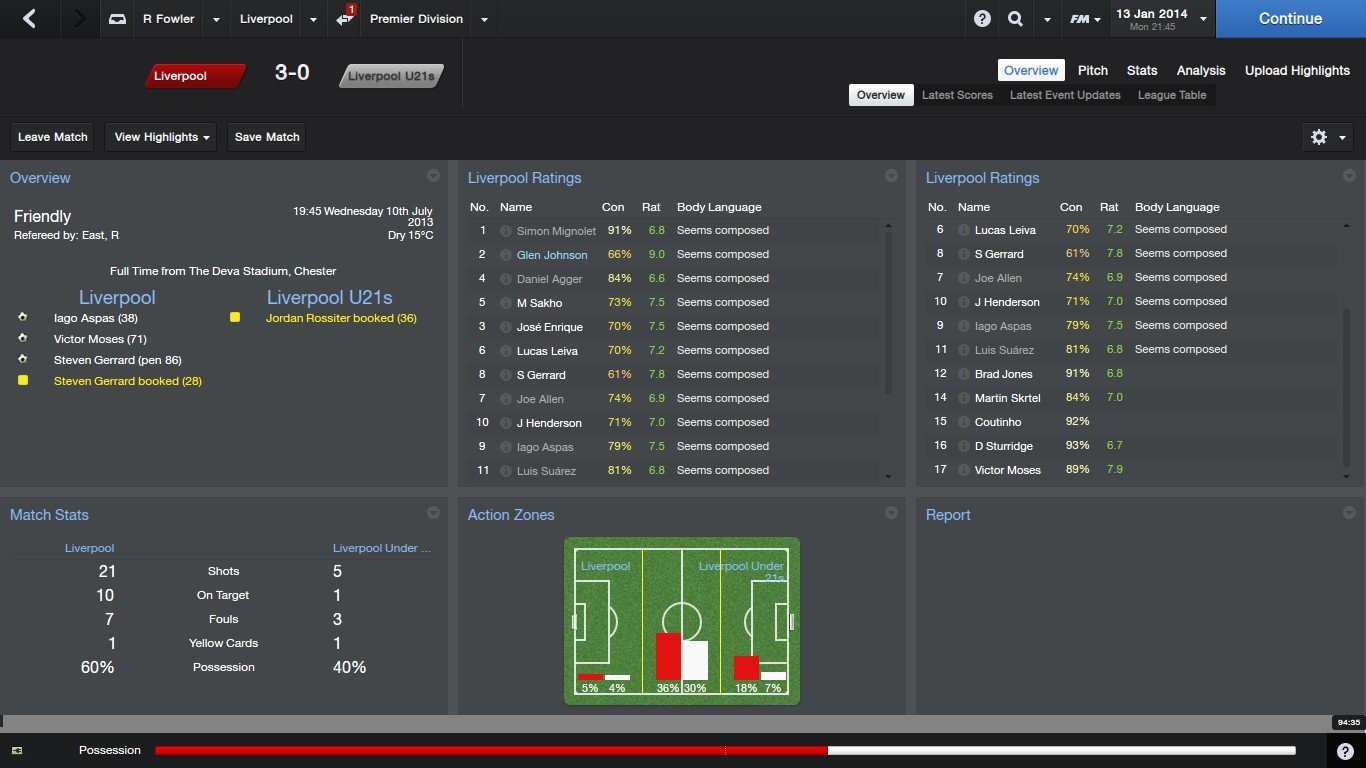 
Liverpool kicked off their pre-season with a behind closed doors friendly. against their reserve squad, played at the home ground of Chester FC, Deva Park. Nearing half time, new signing Iago Aspas lashed a perfect low cross from English fullback Glen Johnson into the top corner, leaving the keeper with no chance.


After half time, another Glen Johnson cross dissected the defence and Victor Moses, on loan from Chelsea, headed the ball into the bottom corner. With just five minutes left, Cameroonian center back Stephen Sama tugged Moses' shirt, leaving the referee with no choice but to award a penalty. Captain Steven Gerrard stepped up to take it and sent the keeper the wrong way to make it 3-0.
Attendance: 0. 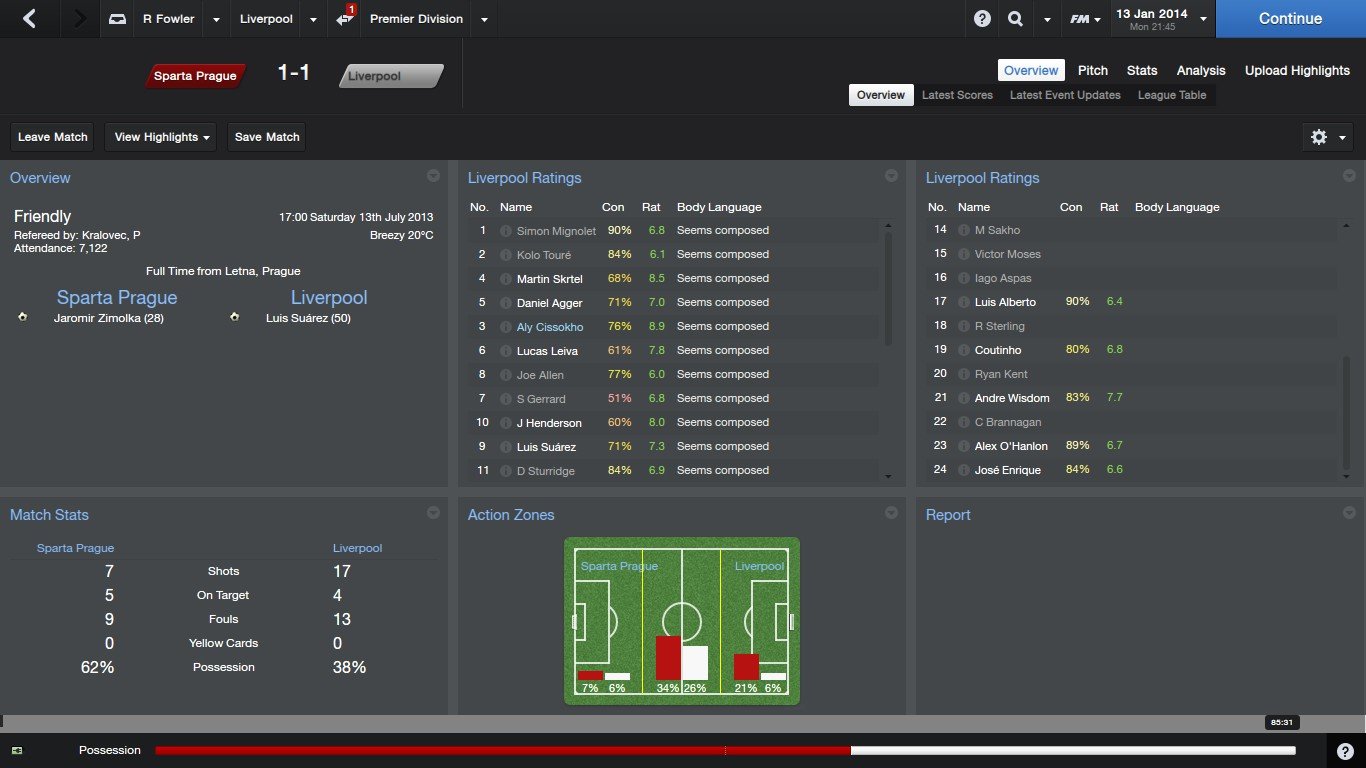 
After the 3-0 win against their reserve squad, Liverpool traveled to The Czech Republic where they faced Sparta Prague in the capital, where they hoped to build on the previous result. However, just before half an hour had passed, Ladislav Krejci put a good cross into the box, matched by a super header from Jaromir Zimolka. The Czechs had taken the lead and silenced the away supporters.
However, after half time, Liverpool leveled, thanks to controversial striker Luis Suárez, who volleyed fellow striker Daniel Sturridge's knock down into the net. The match finished 1-1, a fair reflection of the game. Sparta Prague dominated possession but failed to create enough chances and Liverpool created many chances but failed to take them. Attendance: 7,122. 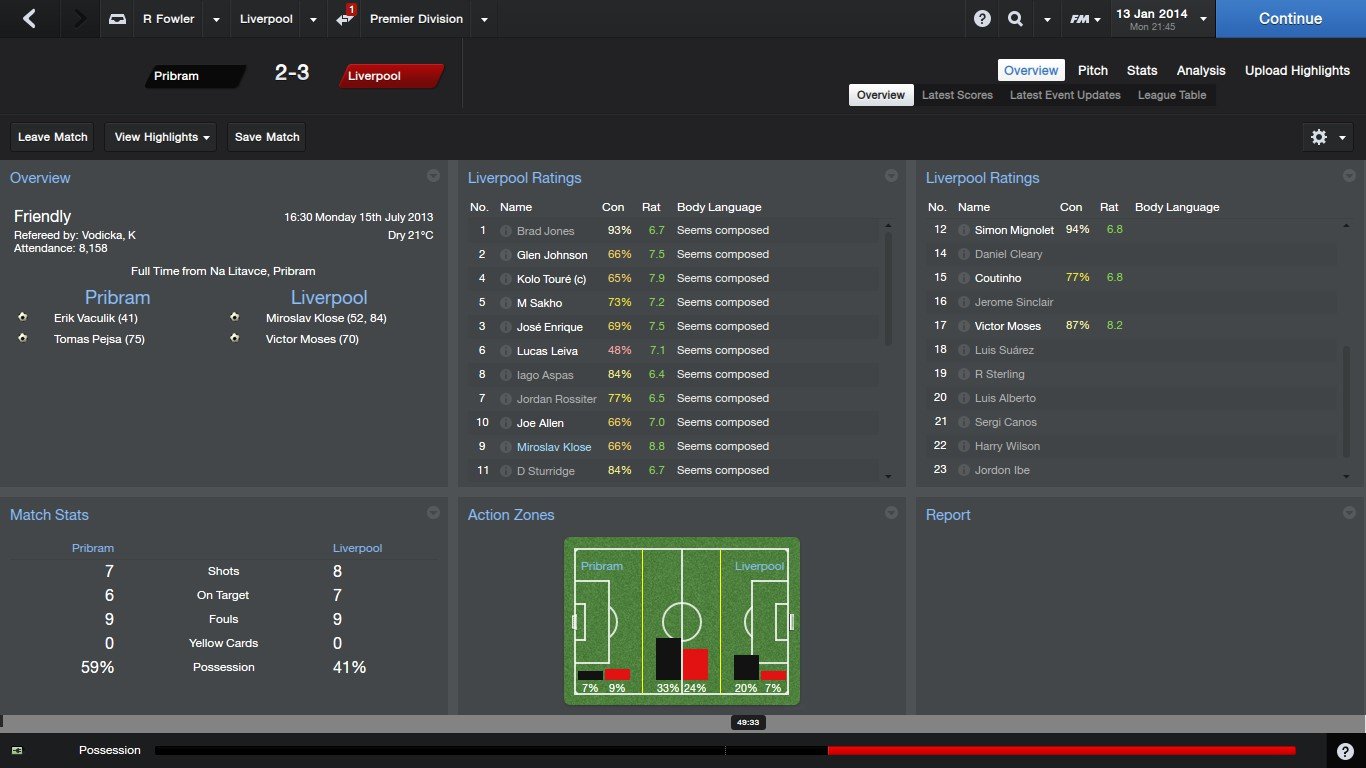 
For their next match, Liverpool stayed in The Czech Republic, where they came up against less reputable opposition in the form of Pribram. But four minutes before half time, Pribram took the lead when Erik Vaculik superbly directed Jan Possinger's cross into the top right corner of the goal with his head.

Seven minutes after half time, Liverpool equalized with a goal from new signing, veteran German striker Miroslav Klose. The goal came after Victor Moses played a low cross into Klose, who volleyed it first time from close range into the goal, leaving the keeper rooted to the spot.
Liverpool took the lead for the first time in the match when Victor Moses scored the goal of the match. He picked the ball up just outside the penalty area, rolled it to the side, before unleashing a fierce drive into the bottom corner. Five minutes later, however, Pribram equalized. Tomas Pejsa rose above all of the defenders to head past Mignolet from a cross by Radek Janik. With just over five minutes remaining, Klose struck again. Another cross from Moses was this time met by the head of Klose, and he powered the ball into the bottom corner. Attendance: 8,158. 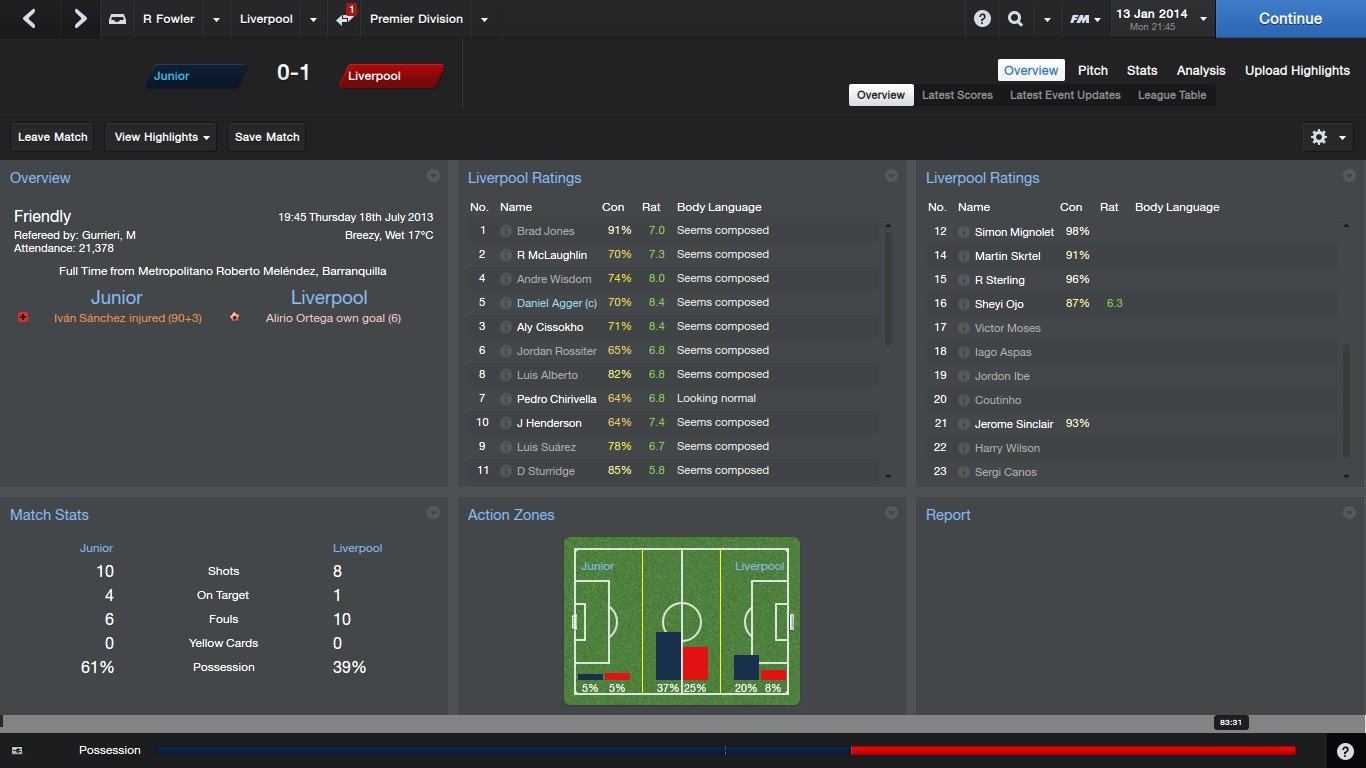 
Liverpool's fourth friendly saw them leave The Czech Republic and Europe and arrive in Colombia to play Junior. Liverpool scored the only goal of the game after an early own goal from Junior defender Alirio Ortega, who battled with Luis Suárez in the six yard box. He won the header and tried to divert it behind for a corner but could only turn it into his own net.
Attendance: 21,378. 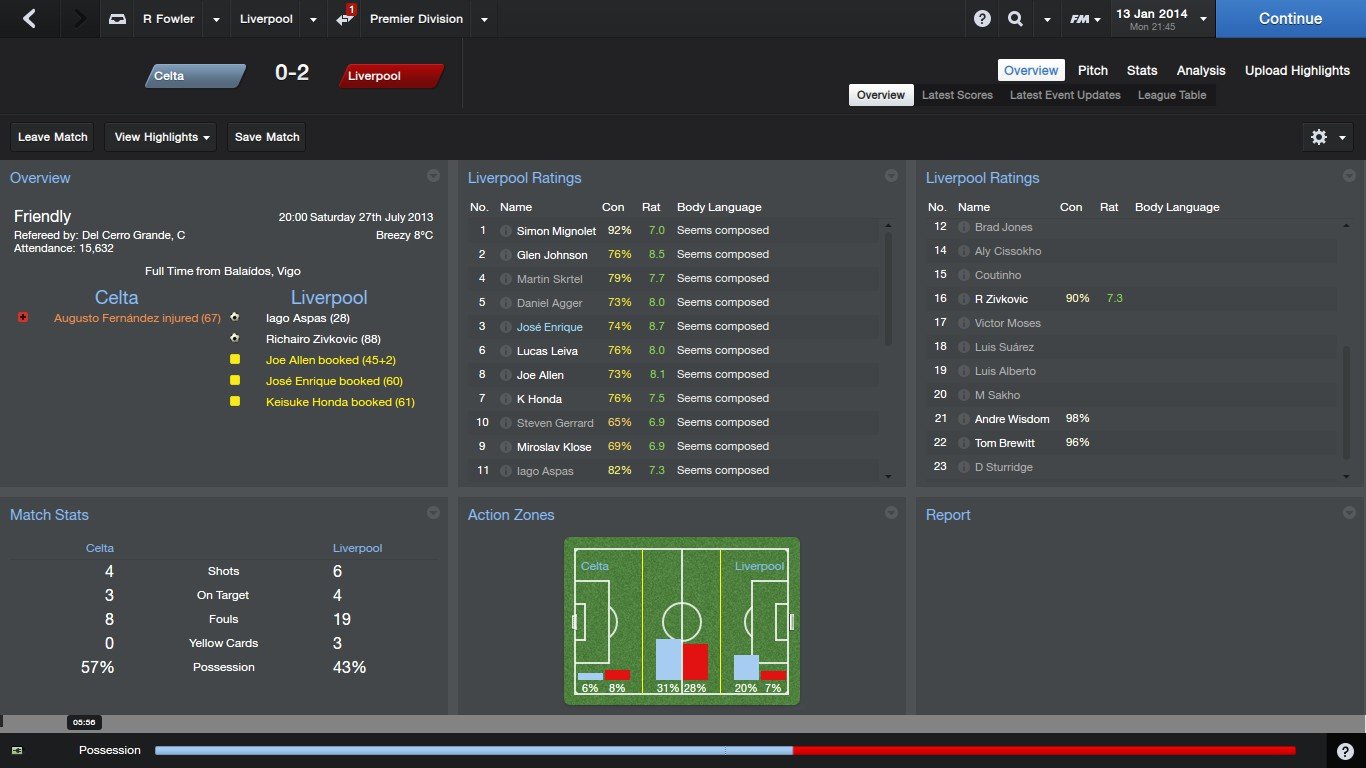 
Liverpool returned to Europe and made the trip to Spain where an emotional Iago Aspas returned to his old employers, Celta Vigo. The striker gave a heartfelt speech before the match started, thanking everyone at the club and the fans for their support. He was given a standing ovation from the crowd, but they were soon silenced when he put the emotion behind him to score a brilliant header from a Glen Johnson cross in the first half.

He was taken off at half time to be replaced by new signing, 'wonderkid' Richairo Živković. This proved to be a good decision as the youngster scored a truly memorable goal late on. New signing, Keisuke Honda, played a brilliant ball through to him. HE then cut inside the penalty area before unleashing an unstoppable shot which struck the post before crossing the line. The match finished 2-0 and Iago Aspas stayed in Spain for a few days after the match to say a final goodbye to his former teammates and his old club. Attendance: 15,632. 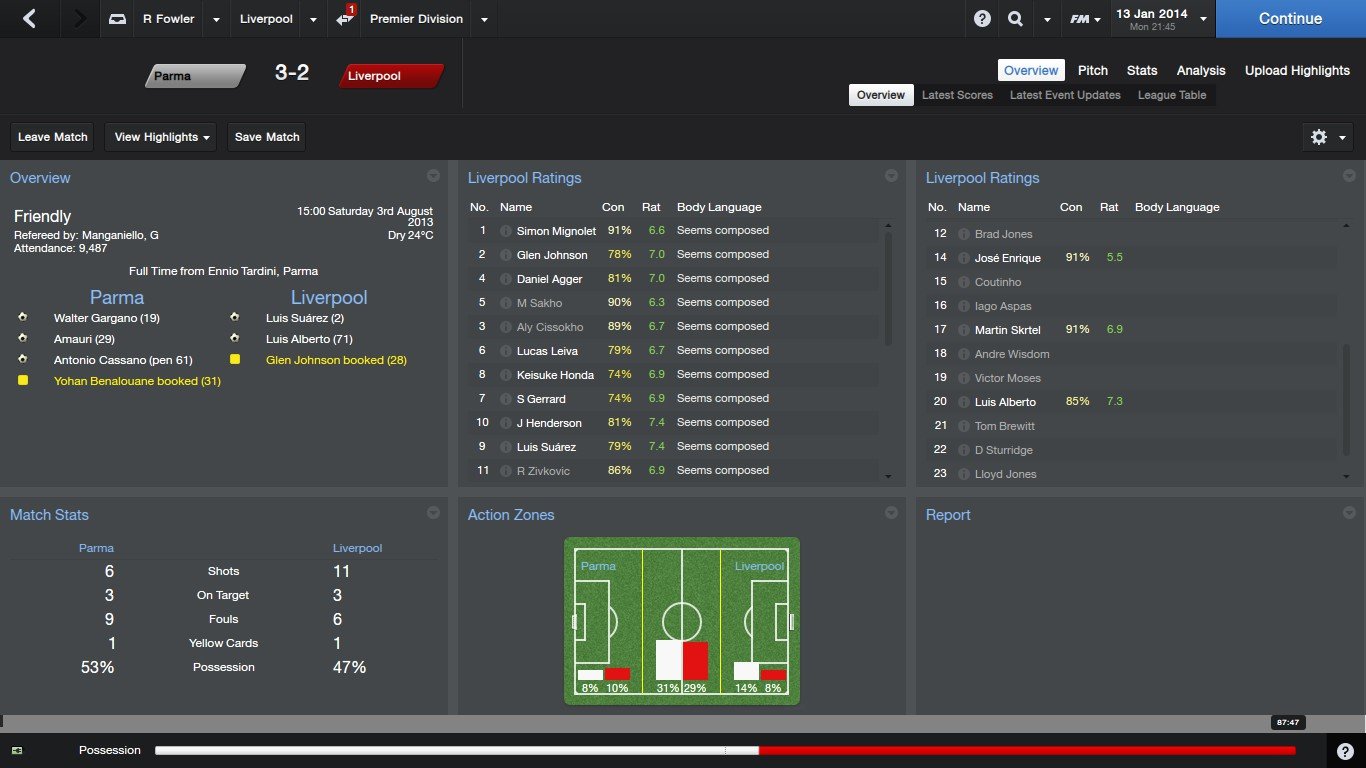 
The penultimate friendly saw Liverpool play Italian Serie A side Parma. Things looked to be going smoothly for Liverpool when Luis Suárez headed in a brilliant cross from Richairo Živković after just two minutes. However, seventeen minutes later, Walter Gargano equalized for the Italians with an easy tap in from Jonathan Biabiany's cross. Parma took the lead when Liverpool defender Mamadou Sakho's attempted clearance bounced off of Amauri, looped over his head and got smashed into the net.

They extended the lead when the referee gave a penalty for an apparent trip by José Enrique. Antonio Cassano stepped up to take the penalty and slipped the ball under the Liverpool keepers' body. Liverpool pulled one back with just under 20 minutes to go when young Spaniard Luis Alberto, who signed for Liverpool in the summer, headed in a cross from Jordan Henderson. The result meant that Liverpool had lost their first friendly of the pre-season. Attendance: 9,487. 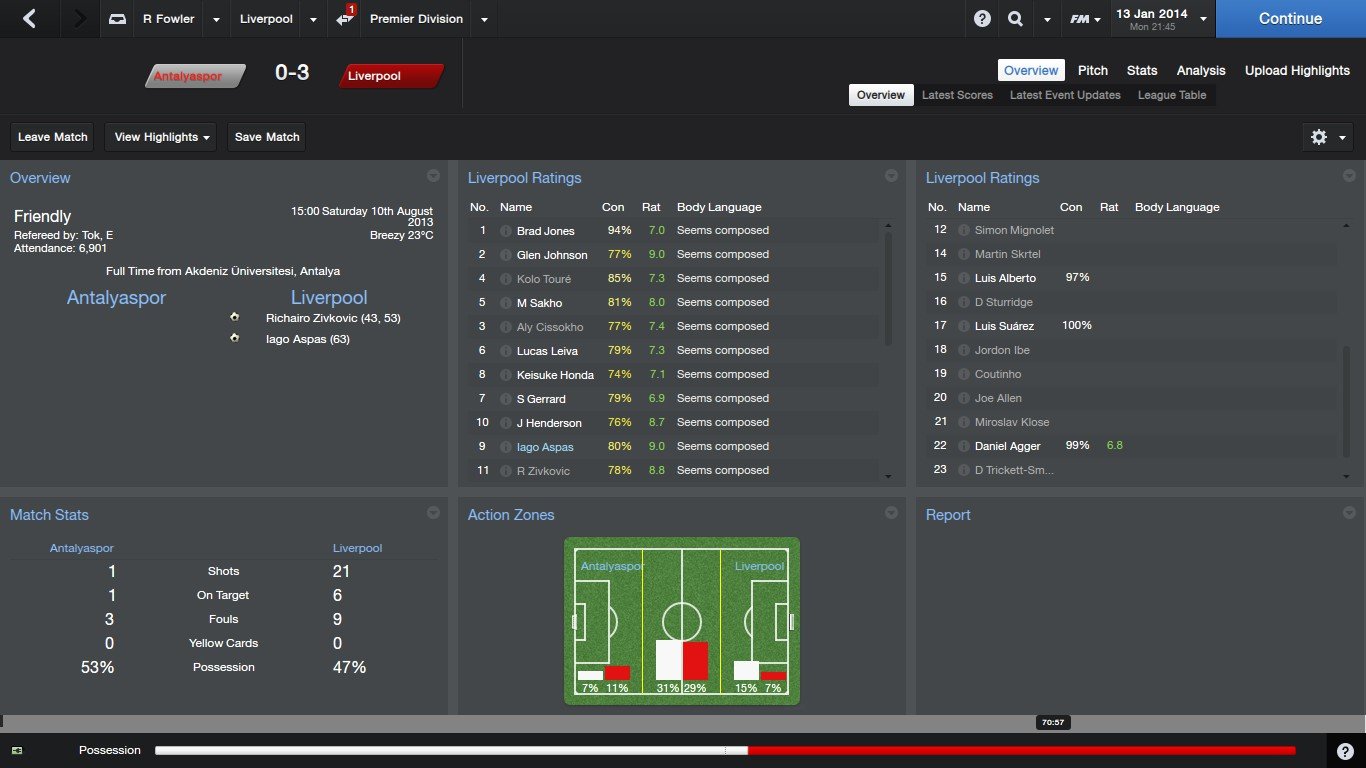 
The final friendly saw Liverpool take on Turkish side Antalyspor. The first goal of the match came just before half time when 17 year old Richairo Živković was superbly played in by English midfielder Jordan Henderson. He controlled the ball excellently before rounding the keeper and slotting into the net.

Eight minutes after half time, he scored again. This time, he picked up a lovely through ball from Iago Aspas, took a touch and placed it into the bottom corner. He missed out on a hat-trick but Liverpool got a third when Živković ambitiously flicked the ball on with his head. It looked like it was going straight to the Antalyspor goalkeeper but IAgo Aspas was determined to score and looped in behind the last defender before heading the ball over the oncoming keeper. Attendance: 6,901.

The Player Of The Pre-season Award goes to Iago Aspas, who not only scored a few, but managed to assist his teammates a lot as well. A thoroughly deserved winner. 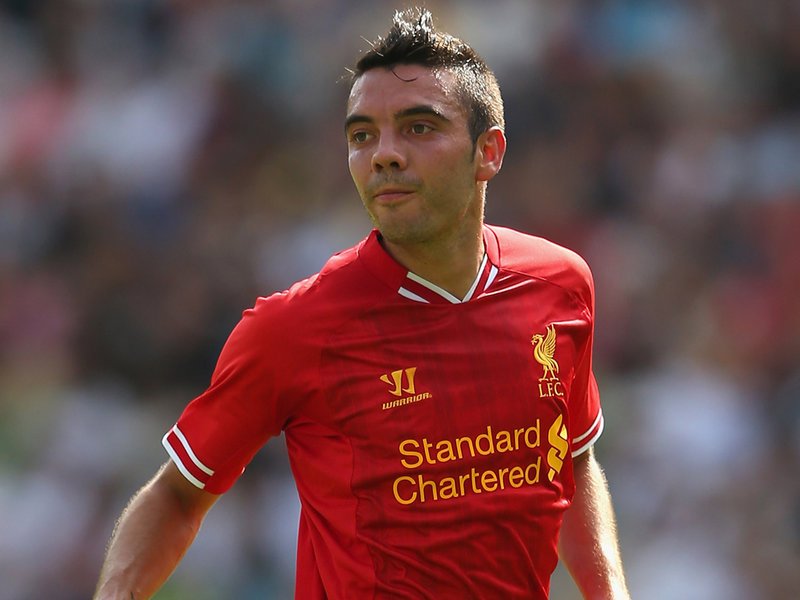 The Young Player Of The Pre-season Award goes to new signing Richairo Živković. The 17 year old was brilliant throughout the pre-season and managed to get on the scoresheet a few times, as well as setting up a couple of goals. He also scored one of the best goals of the pre-season in the match against Celta Vigo. 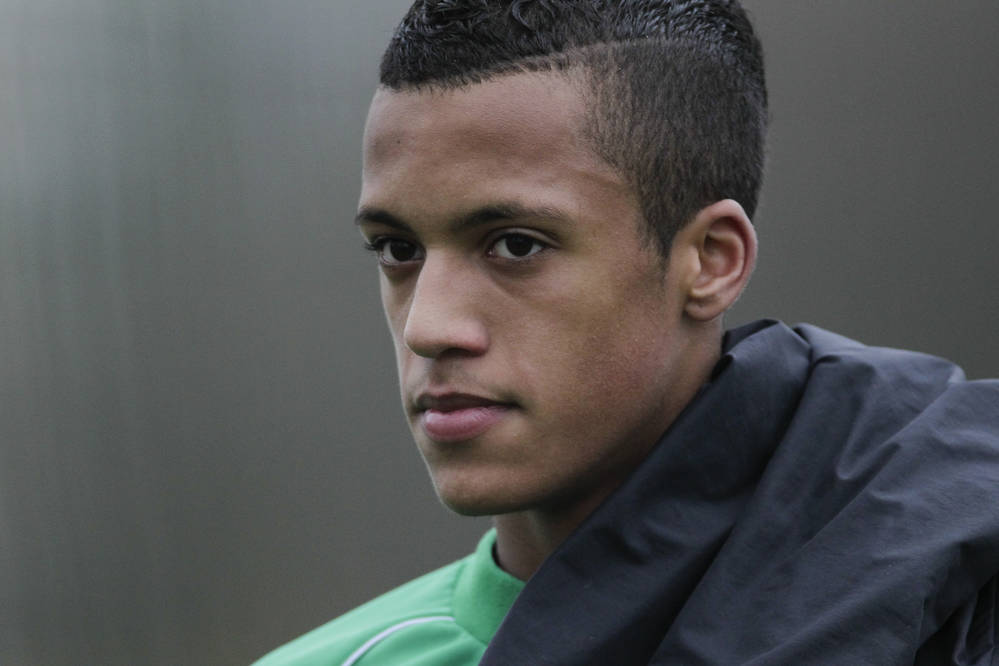 You are reading "Liverpool FC - Fallen From Grace".