To The Last Day Again!

Barnet have done it yet again, for the fourth year in a row, Barnet have taken it to the last day of the season to see if they will yet again survive the drop. This happened following Barnet’s last game at their beloved football ground, Underhill. For the entire first half, Barnet dominated Wycombe with numerous chances coming from the men in black and amber but despite Wycombe ‘keeper Matt Ingram being pushed to his limit, Barnet failed to take the lead.

However, in the second half, Wycombe came back into the game for the first twenty minutes but straight after, the Bees continued their dominance. And it all paid off on the 82nd minute when Weston knocked the ball out wide to Gambin, the substitute fired a low cross into the box towards Jake Hyde who slotted it home for his 14th goal of the season.

Shockingly, Barnet’s hard work could be undone when MK Dons loanee Tom Flanagan brought down a Wycombe player in the box and the referee pointed towards the spot. Joel Grant stepped up to the penalty spot but a spectacular diving save denied Grant Wycombe’s equaliser and the entire stadium roared with cheers of over 5,000 Barnet fans. And when the final whistle blew, a large number of passionate fans decided to invade the Underhill pitch.

Davids then stated afterwards, “I believe that if we play the exact same way as we did today against Northampton, then we shall remain in the football league!” Barnet ‘keeper Graham Stack spoke of his pride of saving a 92nd minute penalty, and with his three kids there, it was a proud moment for the thirty-one year old.

But how will Barnet do next week, when they travel to Sixfields to face Northampton town who have already qualified for the Npower League 2 play-offs. Barnet must go into this game hoping that Northampton play a weakened team considering they have nothing to place for. But now, the question is, who will go down: AFC Wimbledon, Dagenham and Redbridge, or Barnet?


http://www.independent.co.uk/incoming/article6276846.ece/ALTERNATES/w460/underhill.jpg
The Barnet team being praised by the fans!

Rablador
6 years
SPOILER ALERT: They go down.
Login to Quote 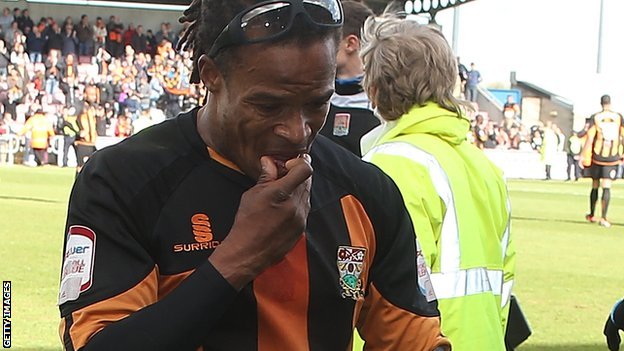 For the fourth time in a row, Barnet had left it to the last day of the season to see if they would survive relegation from the football league. The previous times being a 1-0 win over Rochdale in 2010. Another 1-0 win over Port Vale via a 47th minute penalty, before a 2-1 away win against Burton Albion after a long range free kick and a volley secured safety, but things didn’t go smoothly this year.

This came after Edgar Davids’ Barnet suffered a 2-0 defeat at Sixfields and were sent down following AFC Wimbledon’s 2-1 home win against Fleetwood Town. For the hundreds of Barnet fans that traveled from North London were absolutely devastated ahead of life in the Football Conference. But despite all of the negatives, the Barnet team did get a round of applause from their fans.

The Bees were on top for large parts of the match but after Keanu Marsh-Brown wasted a golden opportunity the tide began to turn. After a goalless first-half Northampton made Barnet pay as Roy O'Donovan and Luke Guttridge scored two goals in quick succession. But despite hitting the crossbar in the last minute, the Bees are now facing life in the Skrill Premier.

The main speculation is roaming around Barnet is will their Dutch superstar remain at the club. Edgar Davids is the current Head Coach with a wage of absolutely nothing, this could raise higher issues making it easier for Davids to resign. However, the Barnet chairman says that he would love him to stay and that it is up to Edgar and that any negotiations will begin in the coming weeks.

It is something I never expected to happen, relegation. After surviving the previous three years, and seeing our performance against Wycombe Wanderers, I expected an easy win over Northampton, but we were poor. We lacked ambition and tempo on the pitch; we were defending quite poorly, and with winger Keanu Marsh-Brown missing an absolute sitter by firing at the keeper despite a clear gap where it could be gone into the bottom corner.

And now the media are going on about Edgar Davids leaving, that would be terrible. Because if you projected how well Mark Robson did before Davids arrived, we would have been relegated probably back in February, so Edgar has done well. And I believe he can continue on but we’ll have to see what happens, because the club is probably in turmoil after being relegated. We need to give the club time to sort out the situation.

Ha, one thought I have always had is to be a Football Manager, imagine me taking charge of Barnet. Haha. But considering I’m only 13, it is never going to happen. It would be a laugh. But there were more serious matters, Barnet would loose funding, funding for the academy. And you won’t be able to play as Barnet on Fifa 14. Sorry, I am going off topic.

But sitting in the stand in the corner of Sixfields, with the hopes of hundreds of Barnet fans lost and me in a very grumpy mood. It was a strange drive home from Northampton, I was of course upset. But the we realised that as we are in a lower division, the chance to not only win more games but to also win more silverware.

Not all negatives!
Login to Quote

Davids: “I think my work here is done”

Speaking in an emergency press conference at Barnet’s training ground and site of their new stadium The Hive, Davids spoke to an audience of: The Times, The Non-League Paper and the Barnet and Potters Bar Times. He had something to share with the football club. He would be leaving the role as Head Coach.

Davids told us: “I am resigning from my role as Head Coach following the club’s relegation, as I feel that we want someone younger to take control. I will become either assistant manager or some sort of coach and Antony (the chairman) has also offered me in case I don’t take that role the chance to be a Director or Director of Football. So either way, I will remain in the club, whether I play is down to whoever takes over!”

But the news that has surprised us the fact that he will continue to support and work with Barnet Football Club but even when he first joined, he said that he loves to support the community of football and of course his local team.

However, Davids has also added: “However, I will be working with Ulrich (assistant coach) and Paul (current Director of Football) decided who will stay at the club players wise and whether any staff will be departing. Although Coach Kenny Brown has already confirmed that he was leaving, and we wish him the best for the future) And a huge thanks to all the Barnet fans who have supported me throughout my time as manager!”

Here are the odds for the possible next manager:


You do not need to ask for this. You views are going up so that means people are looking.
Login to Quote


You do not need to ask for this. You views are going up so that means people are looking.

Matt's right. We've told you countless times before about constantly asking about who's viewing, be that in the form of a chat, poll, countless posts or whatever - have you seriously not learned your lesson? I wish you all of the best with your story, but you need to stop being so driven by views and comments. People will read and comment when they want to, besides, you're not even onto page 2 yet.
Login to Quote

Just for a Laugh!

I sat in my living room on my laptop, my two closest mates Harrison and Adam were sat either side of me, and we were taking about Barnet. Harrison nudged me and said "So, what do you think about Davids leaving then?". There was an awkward silence about the room! "Well, I, um... To be honest I am just disappointed!" I replied.

I then was on a the Barnet club website, I saw the address and email of the offices at Barnet's Training Ground and home of the New Stadium "The Hive". Adam looked at me: "Oi, in football training, you are always coming up with great ideas for tactics and that! GO AND APPLY!"

And so I wrote!

I am writing to you today about the vacant role as First Team Head Coach following the recent departure of Edgar Davids. I may be only thirteen but I think I have the determination and ideas to get the club out of this division and strive up the Football League and become something that this club has never done.

I think I could be that man who can take control and lead this clubs to new heights. I have been a fan of Barnet FC since I was six. That is seven long years as a bee. And as long as I know and care and love this club, that is all I will ever need to succeed.

I do hope you do at least consider me I know you may not want to cause of my age. But if you appoint me, I won't let you down!

And now, the waiting game began!
Login to Quote

The exciting winger has already linked up with Edgar Davids’ side for pre-season and he can't wait to get started. The youngster had a brief spell with the club during the later stages of the 2012/13 season and he immediately caught the eye.His finest moment in black & amber came when he struck late on to secure a 1-0 win for the Bees over AFC Wimbledon.

The central defender Acheampong played a pivotal role in the Wings (Welling) promotion winning season helping the club keep an incredible 17 clean sheets as they clinched the Blue Square South title. Acheampong’s ability and consistency also led to him being named in the 2012/13 Blue Square South Team of the Season.

Anthony told Barnetfc.com: “I am very pleased to be here, it is big club with massive ambition so I am very happy to have joined. Barnet fans can expect somebody who gives their all for the club and although I am first and foremost a defender they can expect some goals along the way.”

Nick
6 years
Some good signings and some really nice updates!!

You are reading "Together We Fall, Together We Shall Rise - Barnet FC".