pompeyblue
9 years
Congrats on winning the Champions League!
Good luck at Villa, hopefully ou can bring the same success which you brought before

Jer
9 years
You could easily bounce back to the PL with that squad. Some nice defensive and midfield prospects (Boyata, Mutch, Mongongu)
Login to Quote

jason_connolly1987
9 years
Pompey - Cheers pal, I have earmarked the Champions League for 2018 and hopefully get drawn against Inter!

Pauker - Yeah, Mutch and Delph should be a strong CM pairing along with Baker and Boyata at the back! Should hopefully win the title and have a decent cup run!
Login to Quote

My first day back at Villa Park was unusual, it was one of those deja vu moments, like I'd already lived this part of my life.

I knocked on the door of Randy's office ten minutes early, he'd just landed back in Birmingham from the States and told me he wanted to discuss transfer targets.

"Welcome back, Jason - it's great to see you. You're all big time now!" Randy beamed.

"I wouldn't say that, Mr Lerner, I'm still the same, humble guy!" I answer with a hint of sarcasm.

"OK, now let's get down to business. We need back in the Premier League at the first shot, who do you need to make it happen? And bear in mind we don't have Inter budgets here!!" He remarked.

Cardiff were relegated with Villa last season and Caulker - their club captain - has stated he wants to leave. Whether he will join us and stay in the Championship is another matter.

I brought Daniele to Inter from the lower leagues and watched him develop whilst on loan and my Inter links should allow us to get him. I feel Nathan Baker will be our left back thus allowing Rugani to partner (hopefully) Caulker in the heart of defence.

Another of my youngsters from Inter, Iancu's creativity and pace would benefit our attack and can play as a left winger or trequartista.

"Yes, for now." I answer.
Login to Quote

With Fabian Delph injured and Jordon Mutch suspended, my Villa return away to Bournemouth would be without my two first choice central midfielders.

Villa had started off well under the caretaker manager Ian Culverhouse after Lambert's sacking and now it was down to me to carry on their good early season form.

Results Prior To My Arrival….

MY FIRST GAME BACK AT THE HELM

The Goldsands Stadium - home of AFC Bournemouth… The start of my second reign at Villa Park.

After away days to The Santiago Bernabeu, The Nou Camp, Juventus Stadium and the Stadio Olimpico last season, this was a shock to the system… Everyone in football were saying I'd taken a gigantic step down - career wise, maybe accurate but for me, this was a mission - to get Villa back to where they belong. 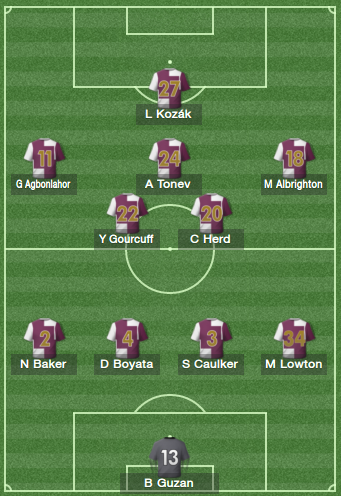 We took the lead after only 24 seconds, Albrighton crossing for Gabby to tap in. Bournemouth levelled on 6' but a 10' strike from Boyata gave us the lead.

Chances came and went for both sides but the scoreline stayed the same...

It certainly wasn't pretty but it was 3 points in my first game back - onwards and upwards from here!!
Login to Quote

YayaSanogo
9 years
Amazing story, been reading since the start and thought I'd comment. Inspired me to begin my own story

Pauker: Made a couple more signings since then too bud, even stronger looking now! Lowton withdrew his transfer request, so did Guzan

bebero
9 years
Gabriel Iancu good player !
It will be a great addition if you can bring!
1
Login to Quote

A decent away point against one of our main rivals for the title. The goal was scored by Libor Kozak.

A topsy turvy game saw us take an 18th minute lead through Boyata only to go 2-1 down before the break. Will Keane equalised on 90+2' and Fabian Delph's 112' strike in extra time set up a mouth watering tie in the next round against Premier League side and midlands rivals West Brom at the Hawthorns….

Special mention to Gabriel Iancu who provided all 3 assists on his debut….

This was it… My first league game back at Villa Park.

I included Alfred Duncan, our third arrival on loan from Inter in the starting line up for this game, he was a youngster I thought a lot of and am glad to have him with me once more. 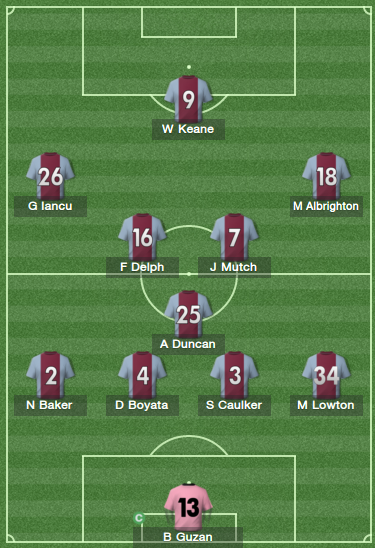 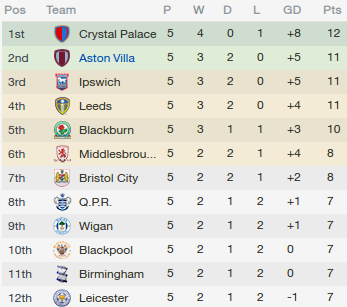 An unbeaten start, something I've gotten used to after no defeats in 76 games in my two Invincible Serie A seasons with Inter…

Oh, and on that note - their first Serie A game without me and under Jose Mourinho didn't end well...

Thanks mate, three assist in his first match

With the additions already mentioned, we added Bjorn Sigurdarson from Midlands rivals Wolves on deadline day as a £2.4m replacement for Southampton bound Libor Kozak who departs for £4m.

Sigurdarson has bagged 4 goals in 3 Championship games and with Gabby, Marc Albrighton and Gabriel Iancu behind him, I'm hopeful he can bag even more.

The squad at my disposal is more than capable of bouncing back to the Premier League at the first attempt especially with Academy youngsters, Jack Grealish, Jordan Graham and Josh Webb adding talented back up.
Login to Quote

Hopefully they will help you get back to the BPL

A solid September saw us defeat Crystal Palace in a top two clash in London as we replaced them at the Championship summit despite being 1-0 down.

We were behind 3 times against Ipswich and showed tremendous character to bounce back each time and claim a point while the undoubted highlight was going to WBA and knocking them out of the Capital One Cup. 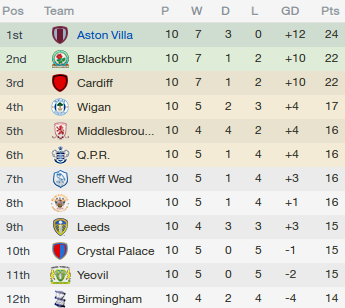 SEPTEMBER PLAYER OF THE MONTH 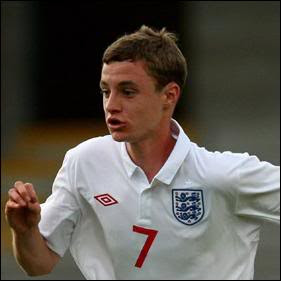 Will Keane takes the award with braces against WBA (he also scored in the penalty shoot out) and Ipswich and keeps new boy Sigurdarson (who has scored 2 in 3 since his arrival) out of the team.
Login to Quote

Herowolf
9 years
Wow awesome story.
Could I ask what tactics you are using though along with your set pieces?
Login to Quote