‘Coming in to the end of 2014, we had our second period in the league. The South African Knockout Cup ended too, (you will find out where we ended up later on in this update) and we had a fantastic youngster coming in, in December. Could the lads keep us in a respectable position, or will we fall down the standings? (P.S. A competition rule changed has been placed too.)’

‘Personally, I am ecstatic with these results. We have only lost twice - both away from home - and they were against teams who are in the top 5, Kaizer Chiefs and Mamelodi Sundowns. I understand that even the best teams lose, but the Ezenkosi are doing fantastic!! What place are we in the league might you ask?’

‘10 points off the top… which contains the Champions League place… and we are in 4th… well, that is perfect! We have been exceeding expectations and that is how I like it to be honest! We are doing very well and I wouldn’t mind finishing 4th this season! Although, there is a bit of change in the qualification for continental competitions, which will be mentioned soon.’

‘Yano is doing well, for now. Hope he can eventually catch up, but nevertheless, doing very well!’

‘Yes, indeed we did reach the Final! We coasted past the Pirates and the Arrows, and we ended up facing the Sundowns again… could we win?’ 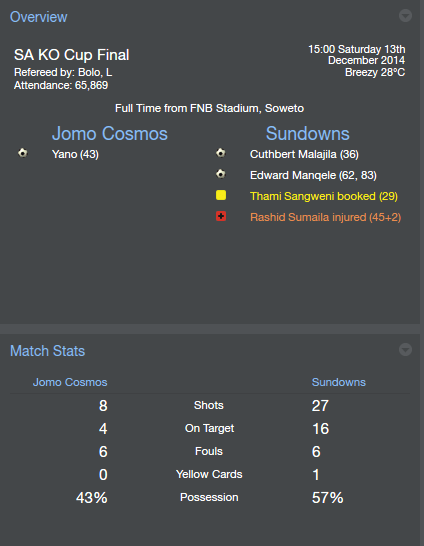 ‘And there, as they say, the fairy tale ended. There was no more happily ever after. They defeated us 3-1 in the National Stadium, and instead of the 600k prize money, we ended up with 169k. Bummer. There’s always next year though. Eliminated with our heads high.’

‘Paizo joins us, on a free. He seems very good, now I just hope he matures and grows up, and then we will have one of the best left-backs in the country.’ 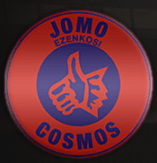 ‘Into the first 3 months of 2015, we wanted to solidify our place in the higher mid-table. We started off with Ajax CT again, and hopefully, start on a high. We also had the draw for the FA Cup and the Confederation Cup, could we finally start our Continental campaign?’

‘We did VERY well in the 3rd period, how did we fare in the overall League Table?’

‘Second Place! Also, we mathematically cannot be relegated now! How’s that for a team who were expected to finish 15th? This is absolutely fantastic and the Chairman is delighted with the Squad Harmony. Only a loss to the pirates disappointed me but they slipped up in other games which is good.’ 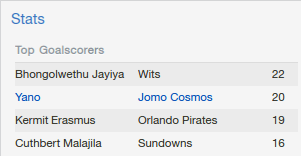 ‘Yano doing very well, although he got injured for 2 weeks and missed 3 games. Hopefully he picks up and wins the Golden Boot!’

‘Our only hard fixtures are Kaizer Chiefs and the Mamelodi Sundowns, could we keep up in 2nd and qualify for the Champions League?!’


‘We were drawn against Tourbillon (CHA) of Chad in the Preliminary Round… would it be tough for us already?’

‘Ismaily of Egypt… I think we will have to put up a fight to be honest.’
Login to Quote

Louis O.
9 years
Nice results, good to be second too even if you are behind Mamelodi. Also you might want to fix that problem you seem to be having with default team badges, just change the graphic settings from GPU Assisted to something or other else

HamoudiLFC
9 years
@Louis: Thanks mate! And thanks for the idea too

‘We had the end of the league coming up, along with a couple of FA Cup fixtures, and some fixtures in *Africa* too! We also had a very good youth intake.’

‘2nd Place! We have done it! We have qualified for the Champions League of Africa! I can’t believe it! In only our 2nd season, we have done a miracle! We earn 350k for our placing in the league. We defeated the Sundowns and the Chiefs, key to us getting 2nd place. The title was out of our reach though.’

‘Makhulong Stadium is a fortress as we are undefeated in the league there! Also, we won the 4th period which means we gain 106k! That’s our finances out of the red.’

‘We were VERY unlucky in the FA Cup and I desperately wanted to beat Kaizer Chiefs, because if we’d won, we would have faced Platinum Stars (almost relegated) and then a team from the lower leagues in Africa in the Final! Although, we couldn’t do it.’ 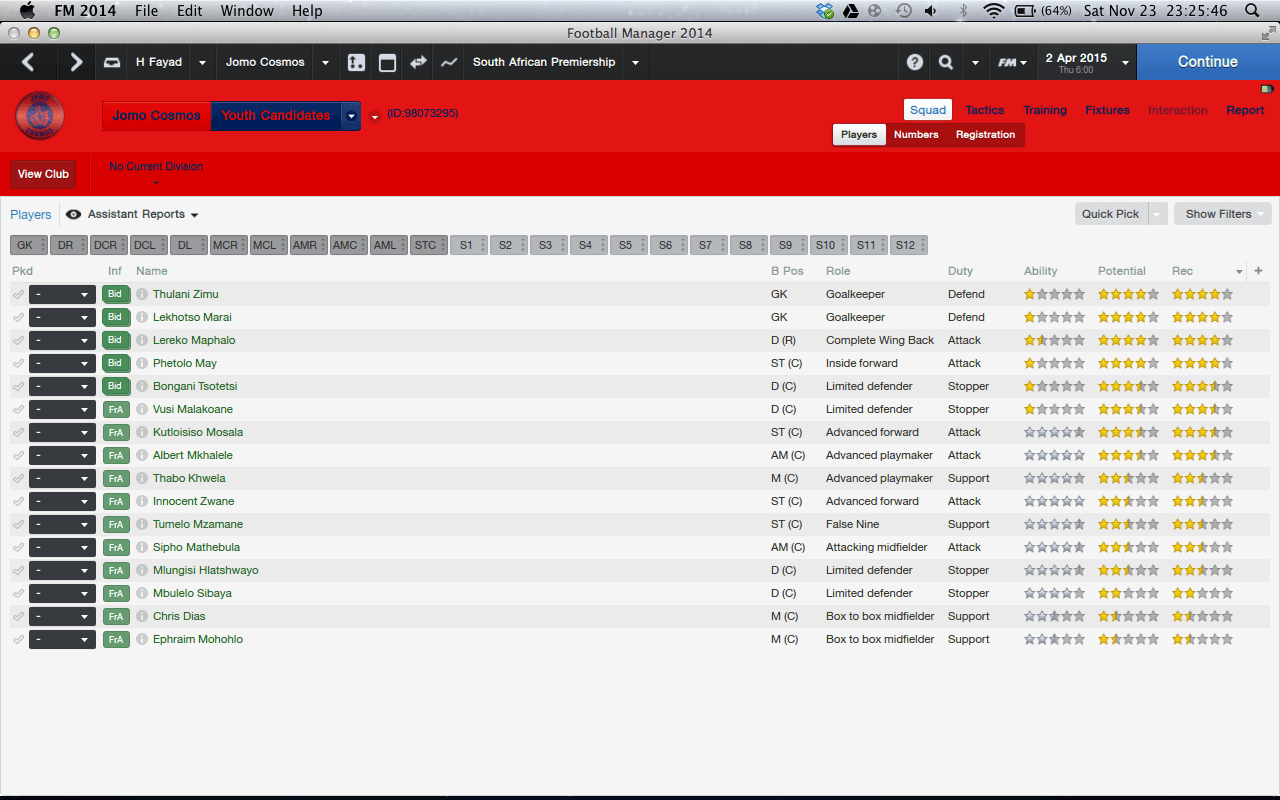 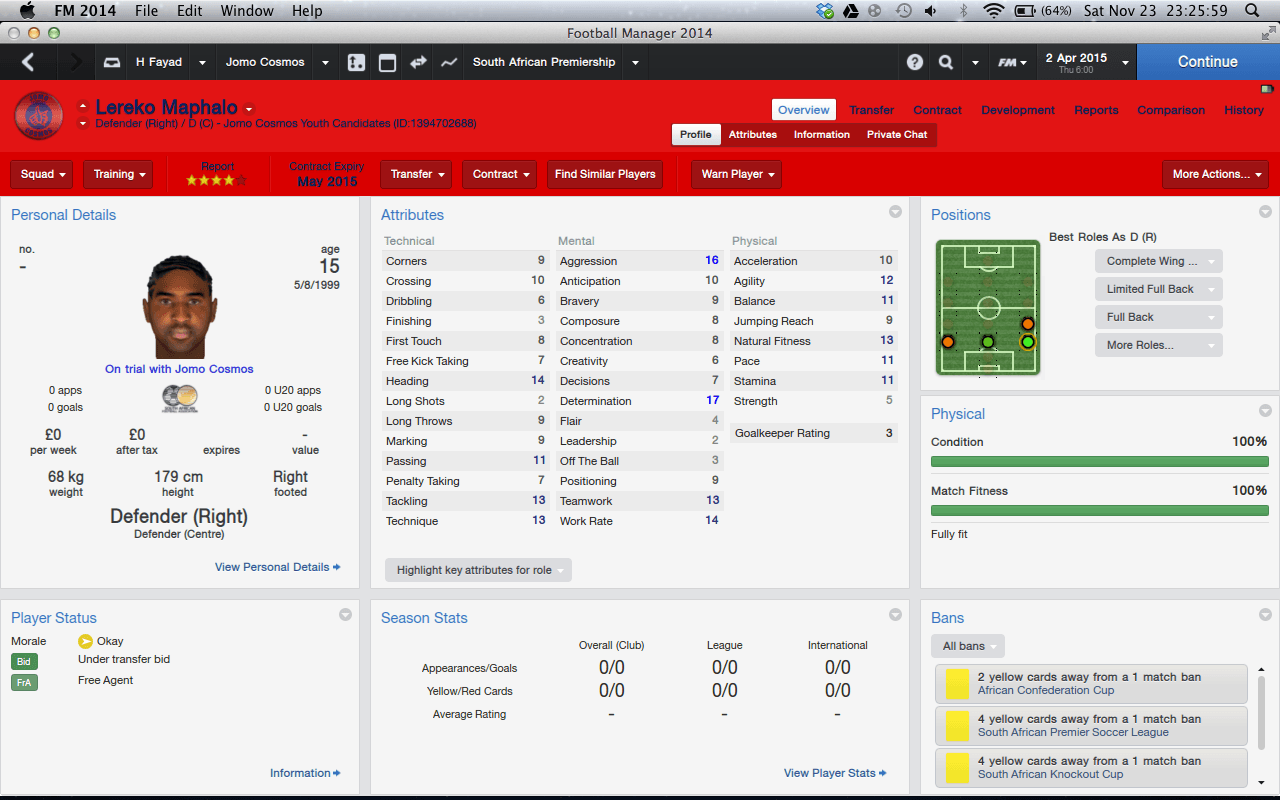 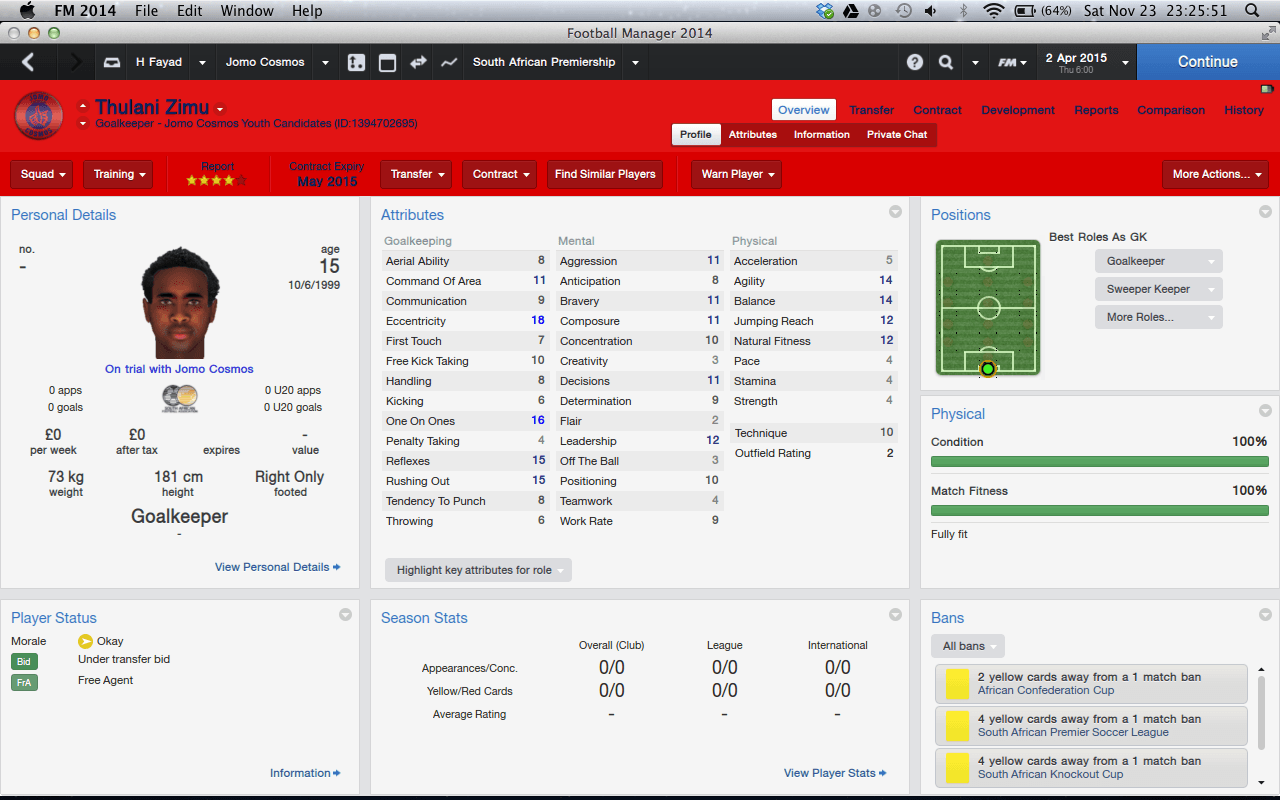 ‘We defeated Ismaily, home and away. A fantastic 6-1 win, taking us into the Second Round. We were drawn against CA Bizerte of Tunisia.’

‘We defeated CA Bizerte and headed to the Third, and final Qualifying Round before the Group Stages… we were drawn against, FC Lupopo of DR Congo.’


‘Our Reserves won their league for a second time in a row!’

‘Soon, I will update you on the finances, transfers, and more. Stay tuned, as we are destined for the top of Africa…’
Login to Quote

Good luck and keep it up!!

Aaron
9 years
Damn, agonisingly unlucky in the FA cup, lets take it to the next level in the CL:P
Login to Quote 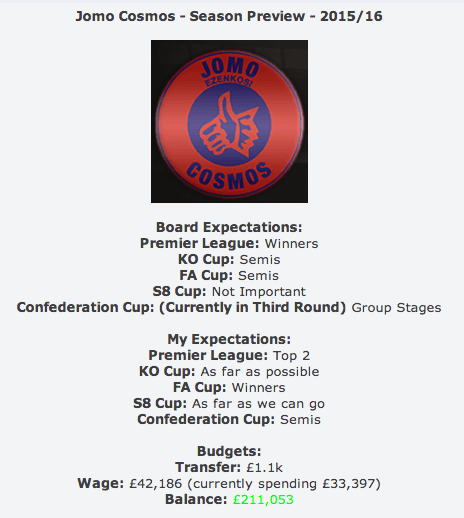 ‘These are my top 5 targets to leave, Isaac Mabotsa and Miloy are both in their mid-30s and aren’t getting any younger, Dlamini and Tati are useless and are taking up the wage bill while David is our least needed foreign player, as we are only allowed 5.’

What do we need?

Others soon to be announced
Login to Quote


‘The start of our second consecutive season in the top flight, and the season where we finally get a taste of the African Champions League. Well, that’s not until February, but we have the African Confederation Cup to entertain us until November! Let’s look at what we have:

’
‘We also have our Transfers coming up too.’

‘Two wins and a loss, not bad. I let my assistant handle the games as I felt we were doing well and I didn’t need to watch the games. The reason we only had 3 games is because we had two Confederation Cup games - in the Third Round - against FC Lupopo.’ 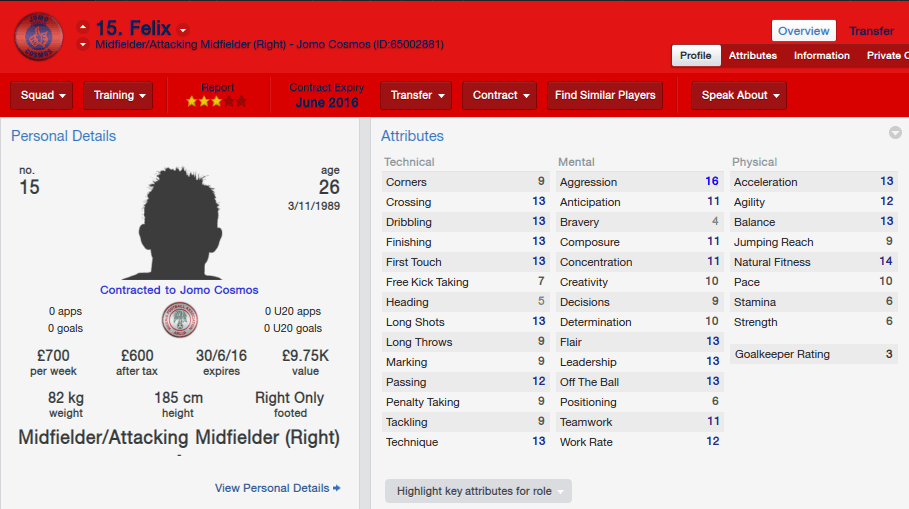 ‘We were in need of a backup for our star winger Ary, and Obada was the one up for it.’ 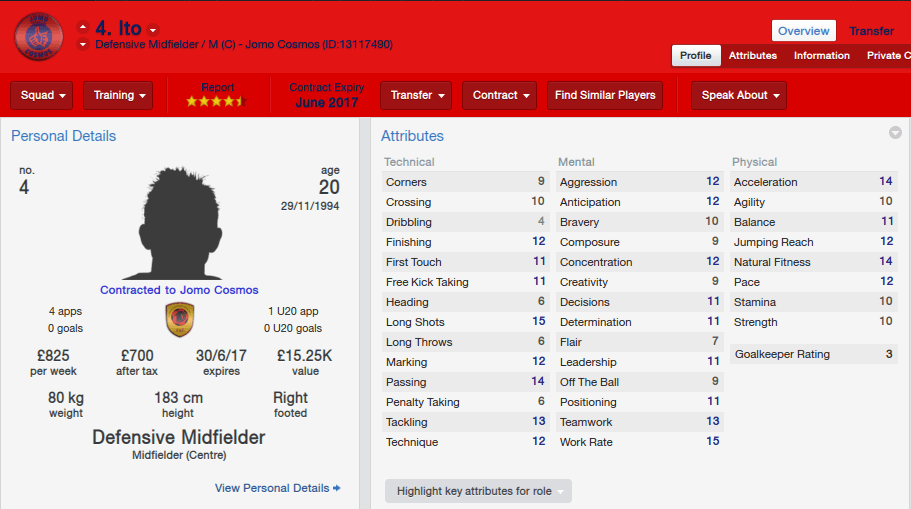 ‘What a signing. I snapped up this lad on a free, just before deadline day. He will play in our first team, and hopefully strengthen our midfield.’ 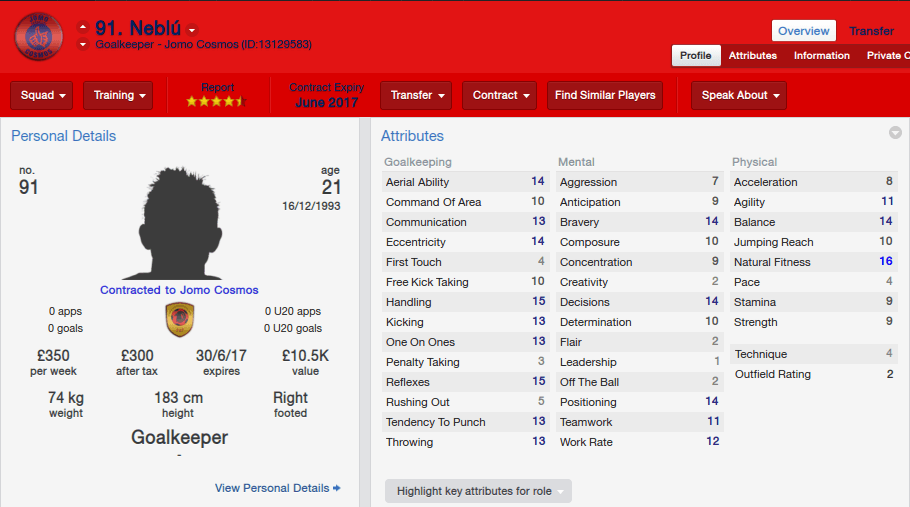 ‘After waiting hard to find the perfect goalkeeper who was out of contract, we found Neblu, thank god we found a goalkeeper.’ 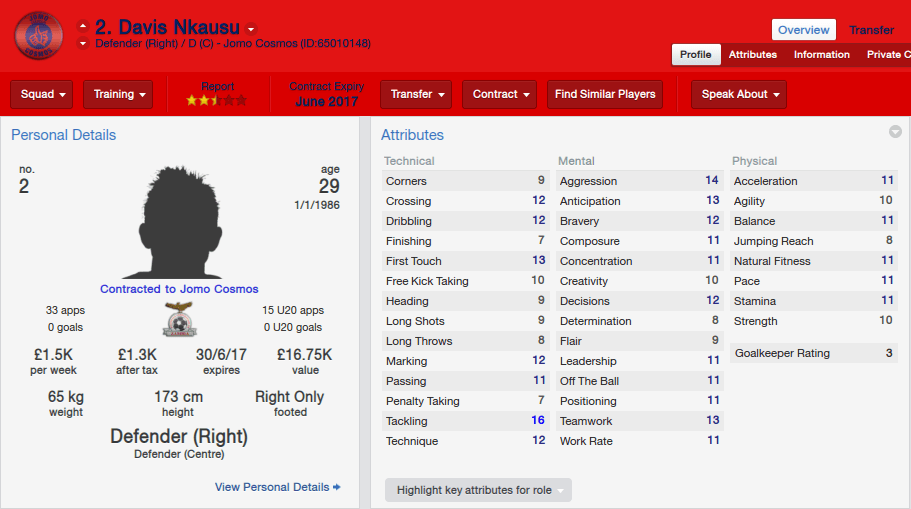 ‘We needed a backup centre back, but this man can play anywhere at the back. He is still good for his age, and hopefully as he grows older, he can tutor our already-starting-15-year-old-starlet-Lereko Maphalo, who seems to have a fantastic future.’ 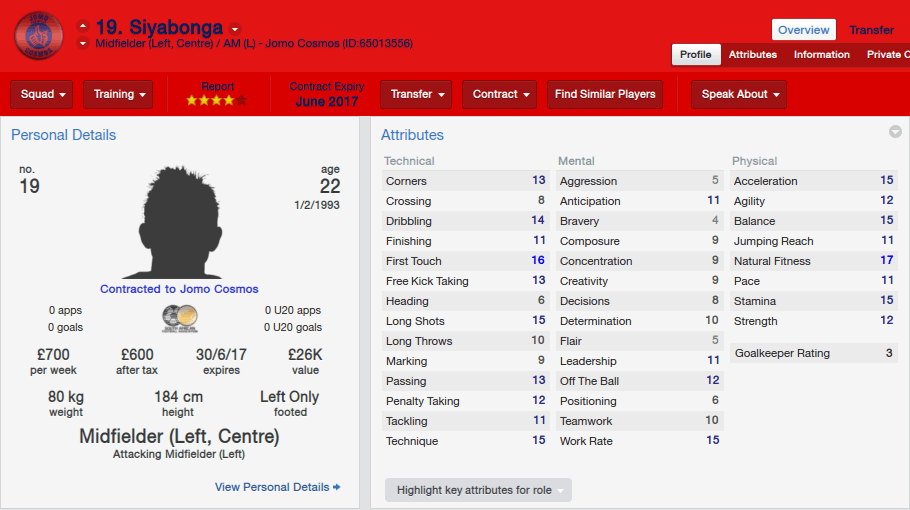 ‘Possibly our deepest position in the team, we need a star player for it. Gumede and Mulaudzi are good, but they are only 17. Mark Mayambela needed some competition, and we bought, Siyabonga.’ 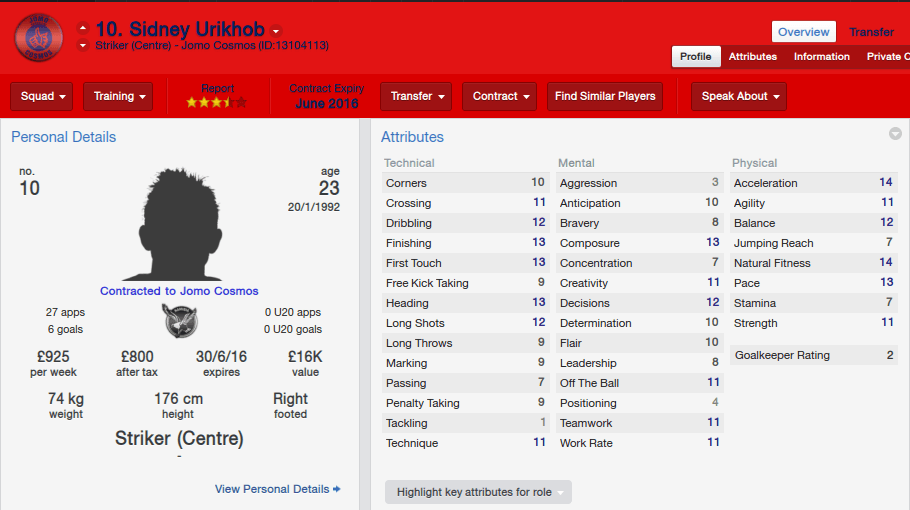 ‘Yano and Jacob Modise were doing fantastic, but we needed a backup striker. Sidney Urikhob looks very good for a backup!’ 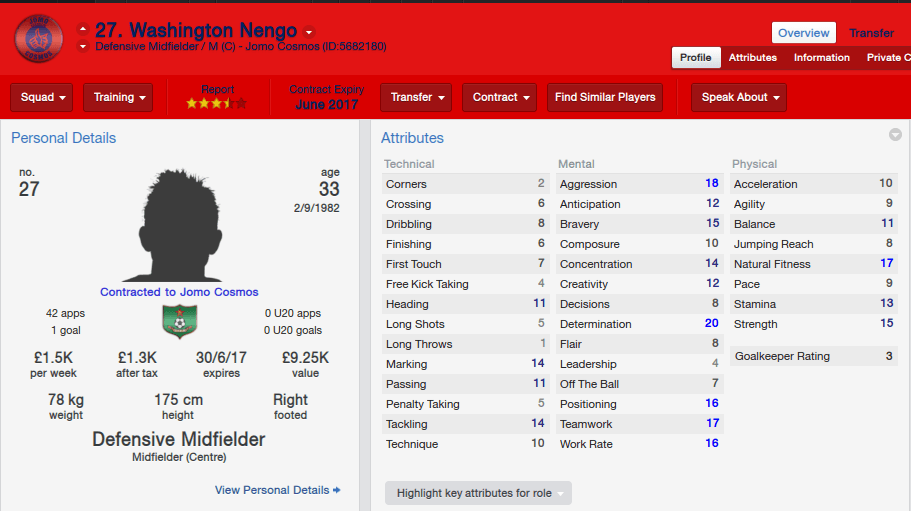 ‘We needed more depth in the centre of our midfield, and what other way can we strengthen it with a man like Washington. He may not have the best Technical or Physical stats, but his Mental stats make up for it. He is very good for a 33-year-old, though.’

‘All of my unwanted targets left, which is a relief for me. Prince Olomu’s departure was a sad one, as his contract finished just after he came back from a 6-month injury. Thulani Ngcepe, Sizwe Maseko, and Sandile Tati all leave for a total of 50k. I let out many young players on loan, but I made a BIG MISTAKE. I let out 17-year-old Charlie Shezi on loan, only to find out he was a very good player for this level. What is wrong with that, might you ask? There is no recall clause in the contract.’

‘Absolutely poor result, and to lose at home too! We were trailing 1-0 for the first 89 minutes before Gift Maponyane gave us the equalizer in the 90th minute, but they killed us in extra time with a heartbreaking goal. Moving on.’

‘Wow… another poor result. To be honest, the only reason I like these cups is because they bring in money for the club, but who cares now, moving on again.’

‘Hmm. We were trailing 4-0 in the Kaizer Chiefs game and we came back with three goals, it wasn’t enough but it was away from home so I am not too disheartened as they are a tough team. We drew with the Pirates, which was away from home (a good game) and we lost to the Sundowns… that game pissed me off. At least, our home record (in the league) is still intact.’

‘Wow. We could have won the First Period if we at least drew with the Sundowns! We could have won 106k!! I am disappointed, but we will bounce back. I promise. Although, second in the league… that isn’t bad at all.’ 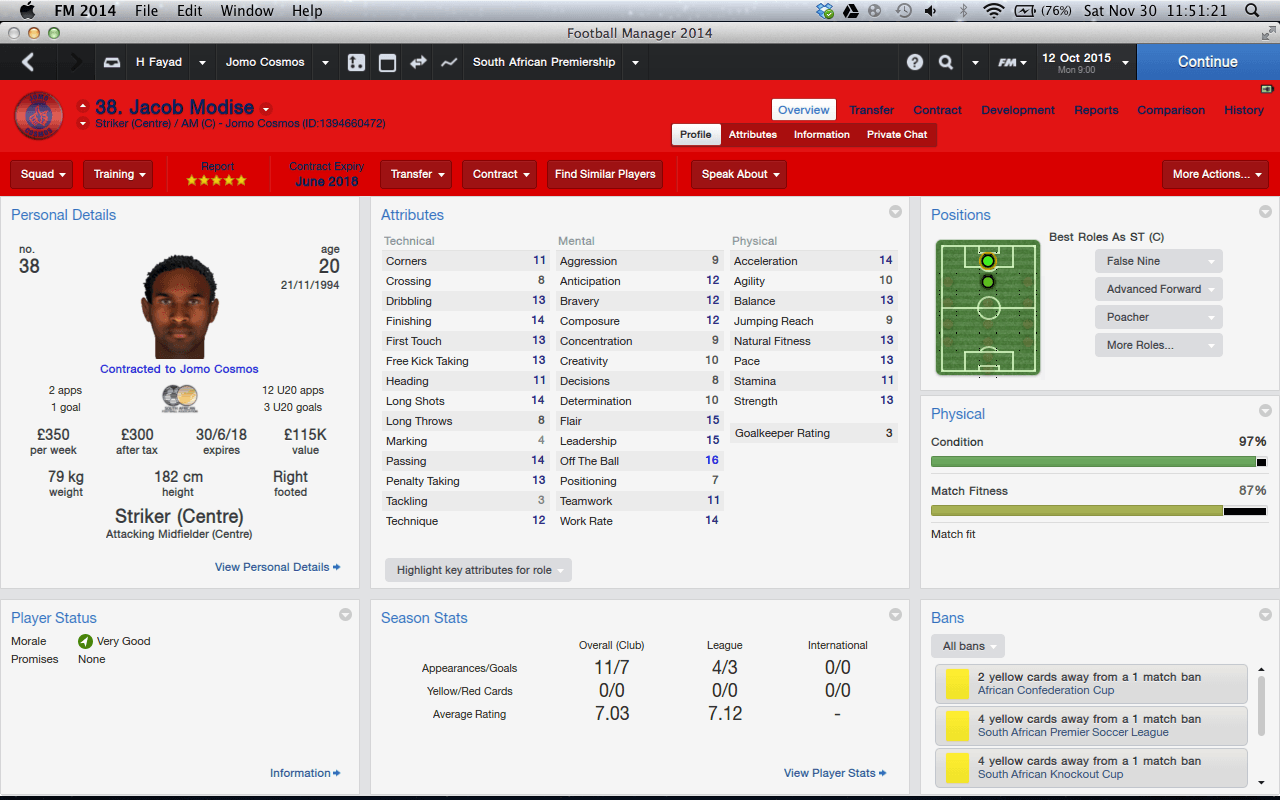 ‘Jacob came into the club through its youth system two years ago, and must I say he has not failed to impress. In his first season at the age of 16, he scored 9 in 11 games. In his second season, he scored 23 in 32 games. Currently, he is on 12 goals in 15 games… Can he continue this streak, to take Yano’s place in our Lone Striker formation?’

‘Kaizer Chiefs… this team follows me everywhere. A piss take in my opinion, but a challenge too. Can we reach the semi-finals?’

‘I am shocked and happy at the same time. We started off very well, then we lost at home to Kaizer Chiefs in a game where we kept under 40% of possession! Abysmal!!! We were trailing 2-0 against Club Africain and came back to 2-2! Only, to be denied in the dying minutes of the game… what happens next? We are winning the Chiefs 2-0, away from Home. Boom. In a matter of 5 minutes, they are 3-2 up. Yano, saved us with a late header. 3-3. We are now on 7 points. Can we still qualify? Yes we can. Club Africain are on 10 points.’

‘We play Club Africain next match, and - it is based on head-to-head - so if we beat them 1-0, 2-1, or anything that involves a 2-0 scoreline or more, that means we qualify. Our two away goals at their stadium were vital! The million dollar question is… will we make it to the Semis?’
Login to Quote

HamoudiLFC
9 years
redwolf0008: hopefully I can get one more update today

This is so good
1
Login to Quote 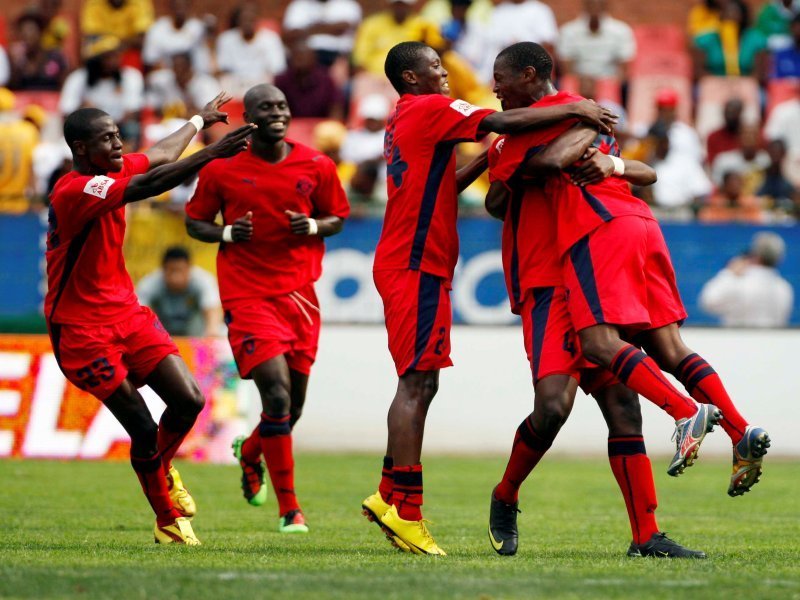 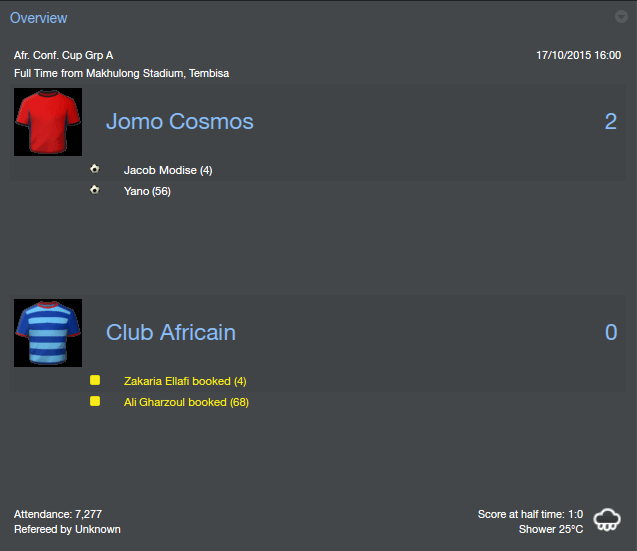 ‘Club Africain had a better game in terms of possession, but Jomo Cosmos were more clinical. Jomo Cosmos only needed a 1-0 win but they exceeded expectations, only 2 points behind the Kaizer Chiefs. Jomo Sono must be delighted with the work of Hamoudi Fayad, as the Cosmos are also second in their respective league, just a couple of points behind the Mamelodi Sundowns.’

‘The strike partnership of Yano and Jacob Modise has been unstoppable of late, especially in the Confederation Cup as they have more than 20 goals between them in this competition only.’

‘Jomo Cosmos qualify in second, on head-to-head over Club Africain. Can they defeat Etoile Du Sahel and reach the Final in their first season ever?’
Login to Quote