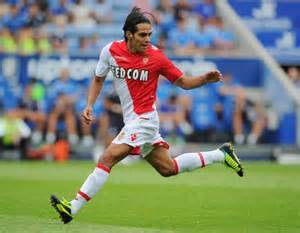 It has been confirmed by Sky Sports News that Radamel Falcao has left AS Monaco to joined Real Madrid for a fee of £120M!

"I know it was quite a short stay at Monaco, but i would like to thank the fans for making me welcome. Obviously I am excited at a fresh start here at Madrid hopefully I can score lots of goals!" said Falcao.

Monaco fans are now wondering what Thierry Henry is going to do with all that money, is he going to spend the money on a striker to replace Falcao. Or is he going to invest into youth and breed young players.

It is a load of cash for a manager that has only joined the club a few weeks ago, lets hope he will spend it wisely so Monaco will be fighting for the title not at the bottom fighting off relegation.

"Obviously It is a great amount of money to have and i will make sure that I will not waste it and bring in some great young players." Henry said.

With just over a month to the new Ligue 1 season Henry better start acting quick if he wants to create a good squad.
Login to Quote

pompeyblue
7 years
Woah that is an incredible amount of money to get!
Spend it wisely

Radders2109
7 years
pompeyblue - I know it's brilliant, I will reveal my signings later haha

k1rups
7 years
Incredible sum of money. I hope there are some strong youngsters coming in!
Login to Quote

TCO
7 years
That banner looks nice, wonder who made it?

A lot of money, I'd focus on building a solid young squad you can slowly introduce to first team football so you have the next 10/15 years sorted, good luck. ;p
Login to Quote

Henry Wastes No Time As He Brings In Ten Players!


Thierry Henry didn't waste any time in spending the money that was brought in from the Radamel Falcao deal, by buying ten players!

The first player to be brought in was Marc-Andre ter Stegen from Borussia Monchengladbach for a fee of £10M."Marc is a good, quality keeper that will fit in very well" said Henry.

The second player brought into Monaco was Mattia De Sciglio, who was bought from AC Milan for a fee of £8M."Mattia is a wonderful player that will get better every game to pick him up for £8M is a bargain." Said Henry.

Next to follow in ter Stegen's and De Scigio's steps was Raphael Varane who joined Monaco from Real Madrid for a fee of £16M.

Also added to the long list of signings was Kurt Zouma from AS Saint Etienne for a fee of £6M.

The fifth signing was Luke Shaw who joined from Southampton for a fee of £18M.

The final three signings were Jese, Yassine Benzia and Lorenzo Insigne. For fees of £5.5M, £8M and £10M

Henry had this to say on his signings, I think they're all very good signing with bucket loads of potential. They're all young which is also good for the future because I won't have to buy so often. Overall I am ecstatic with my signings and I can't wait for the season to start to showcase them all to you! 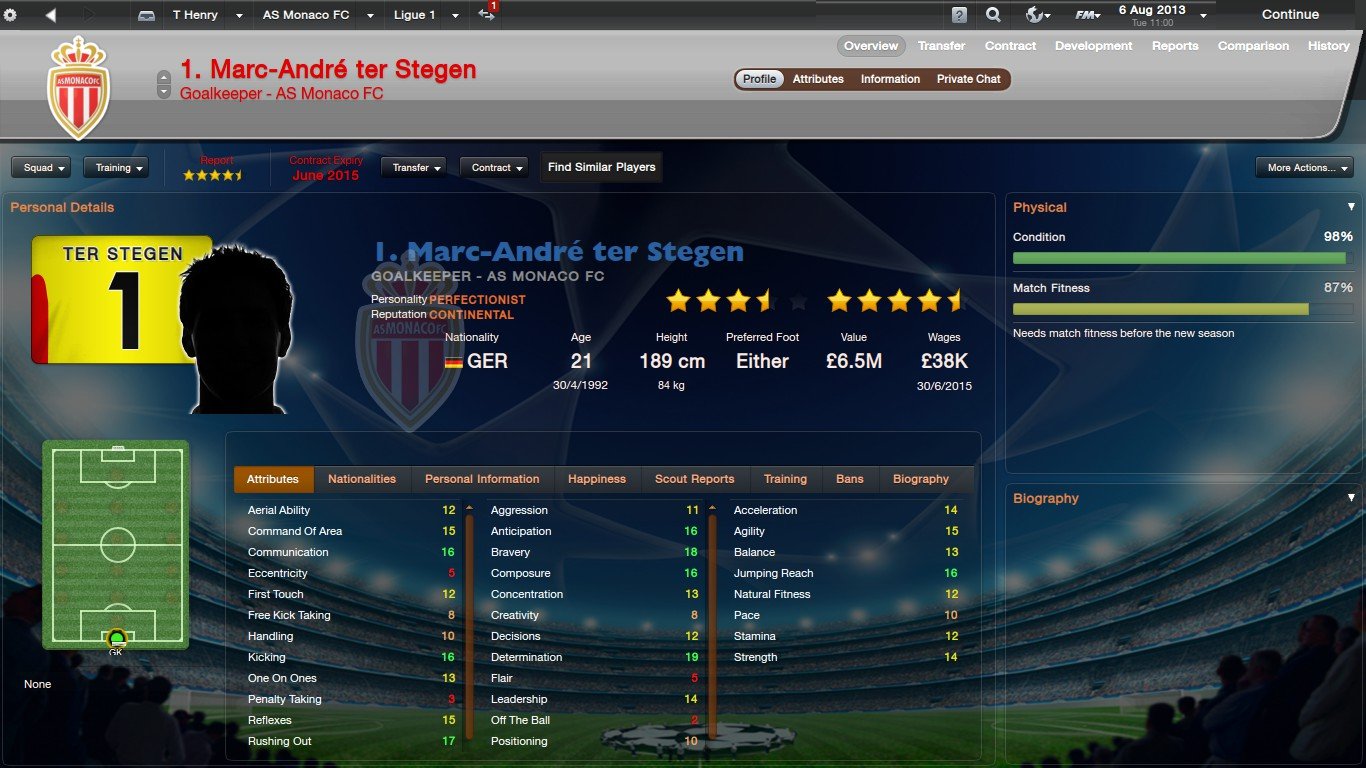 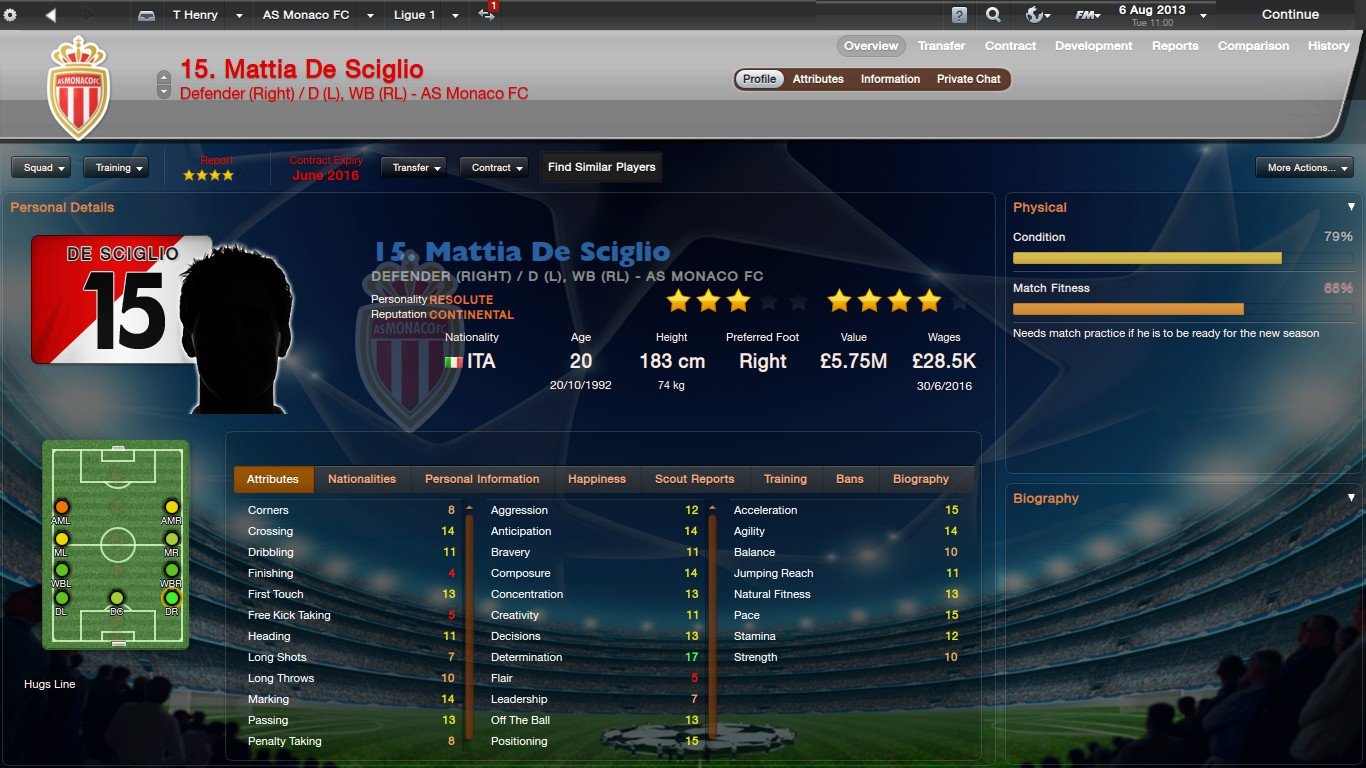 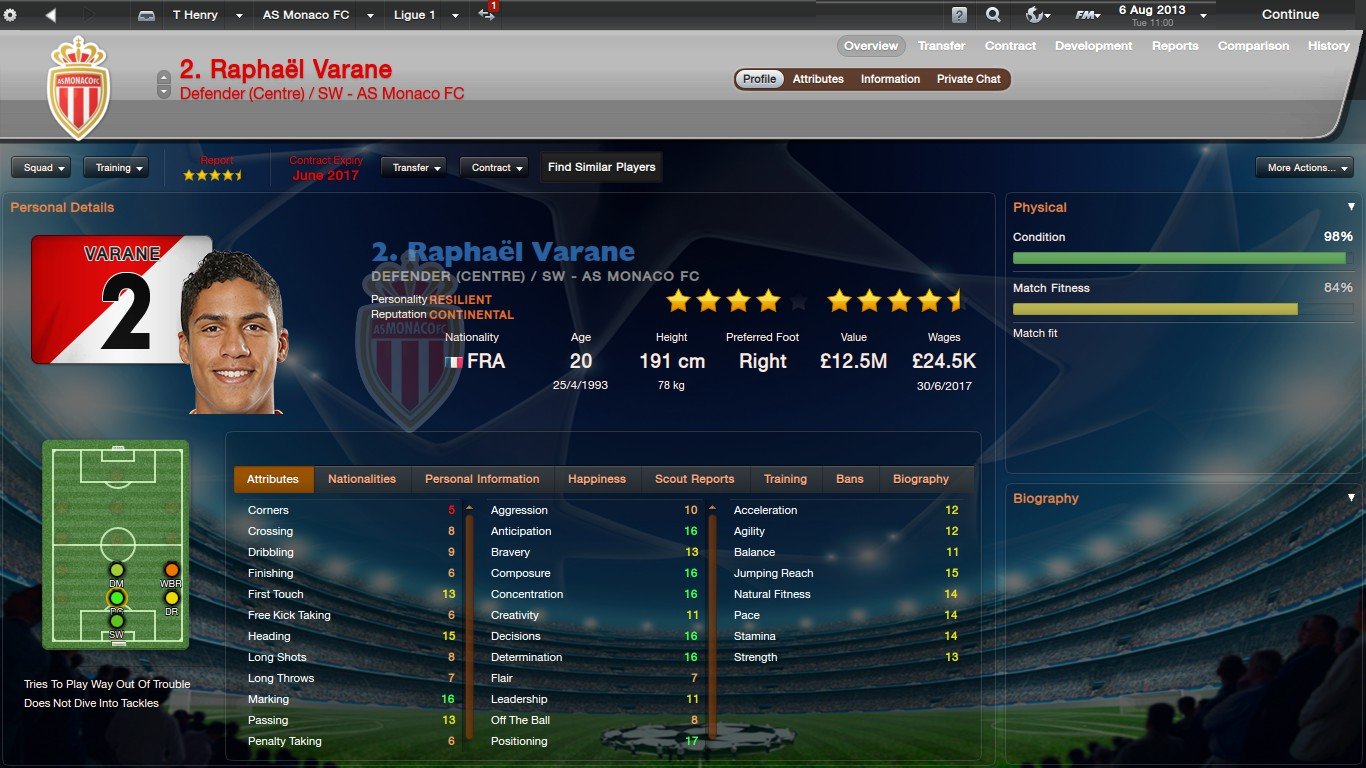 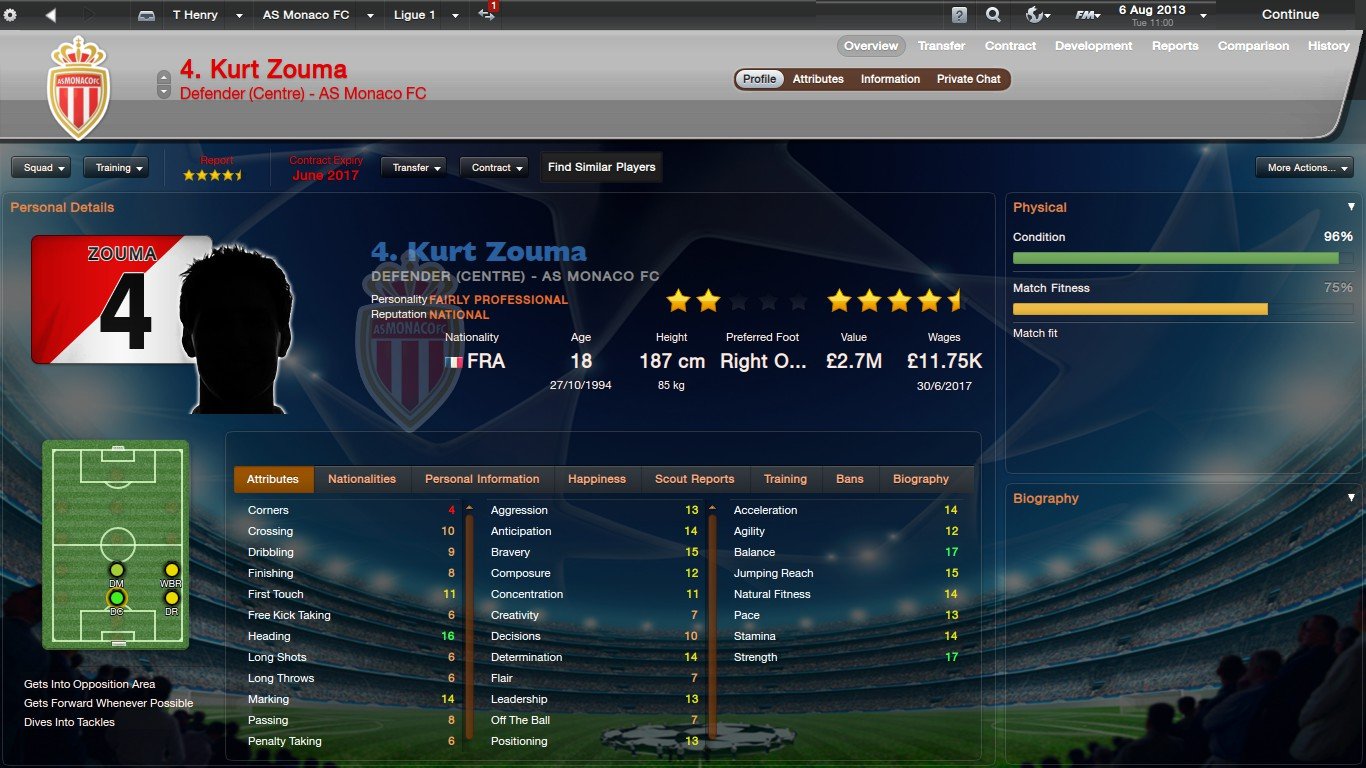 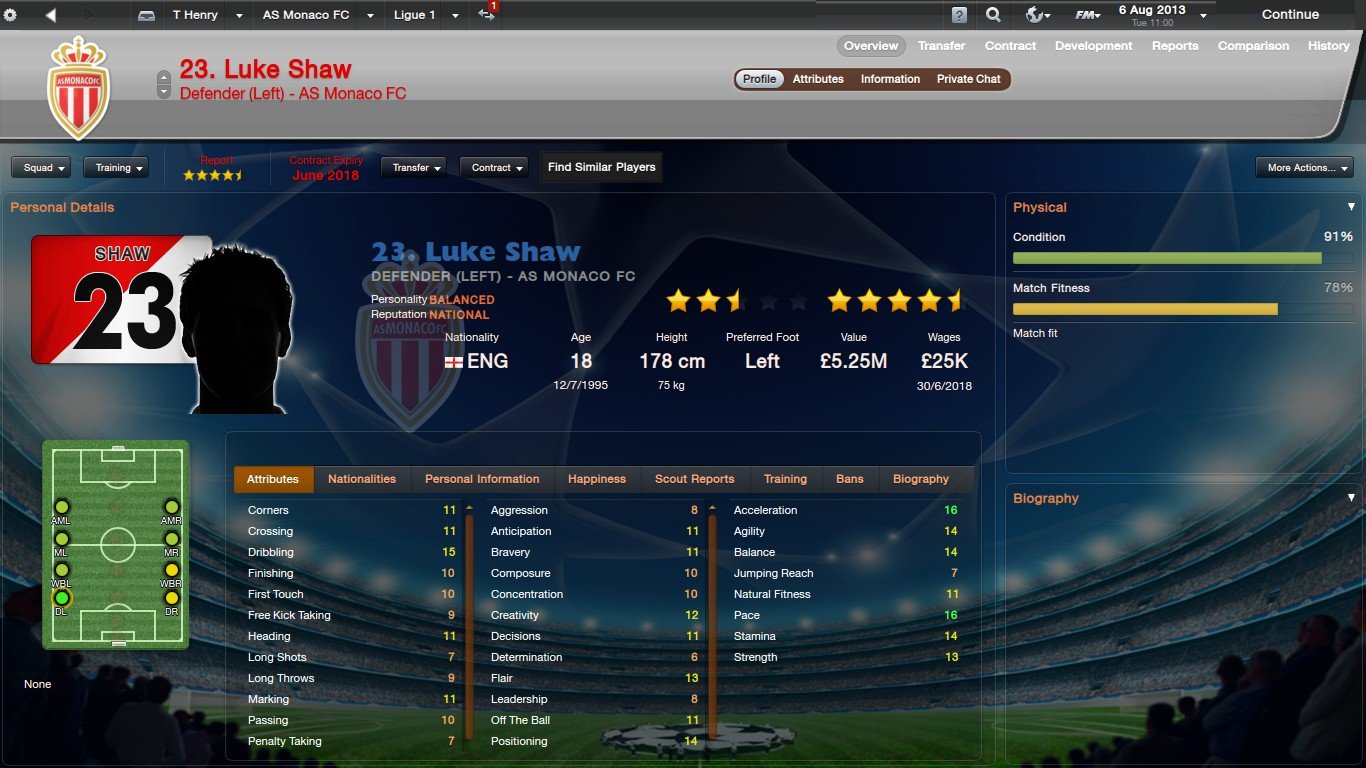 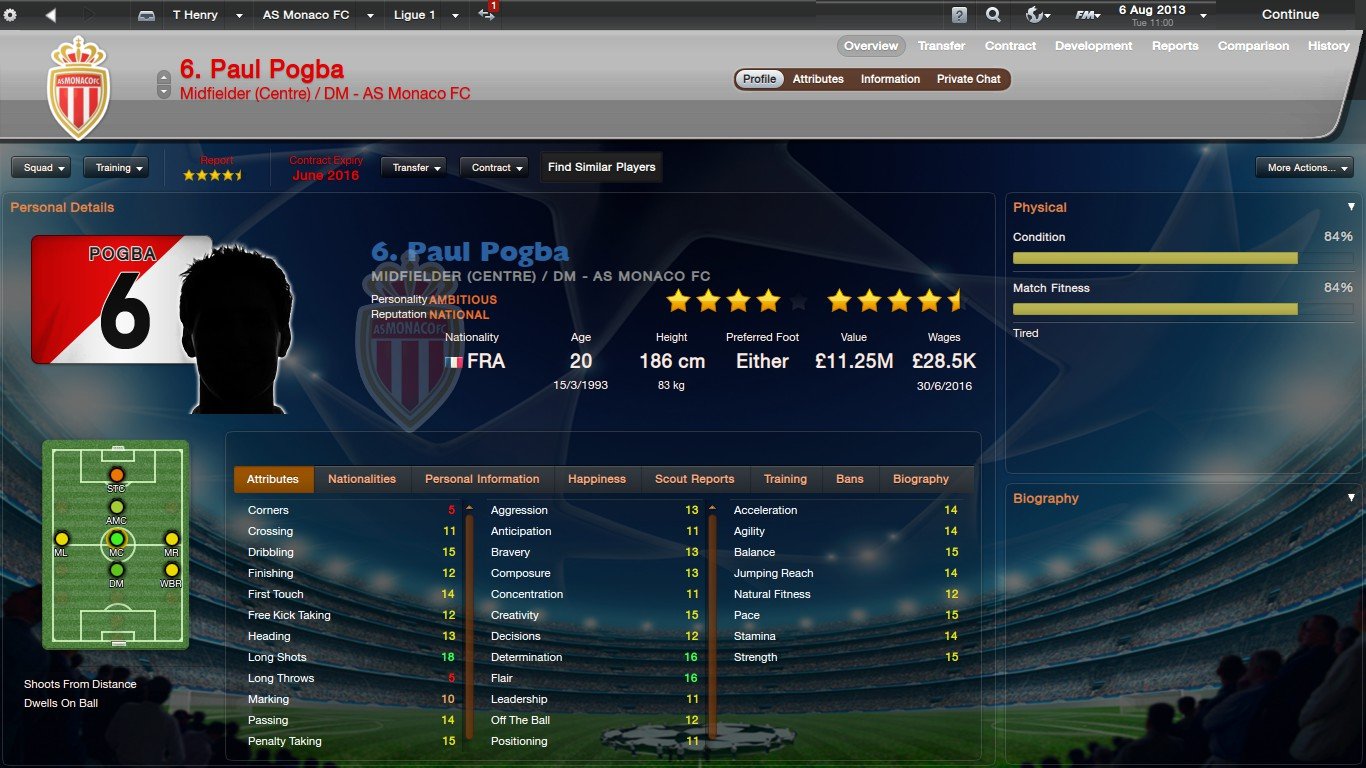 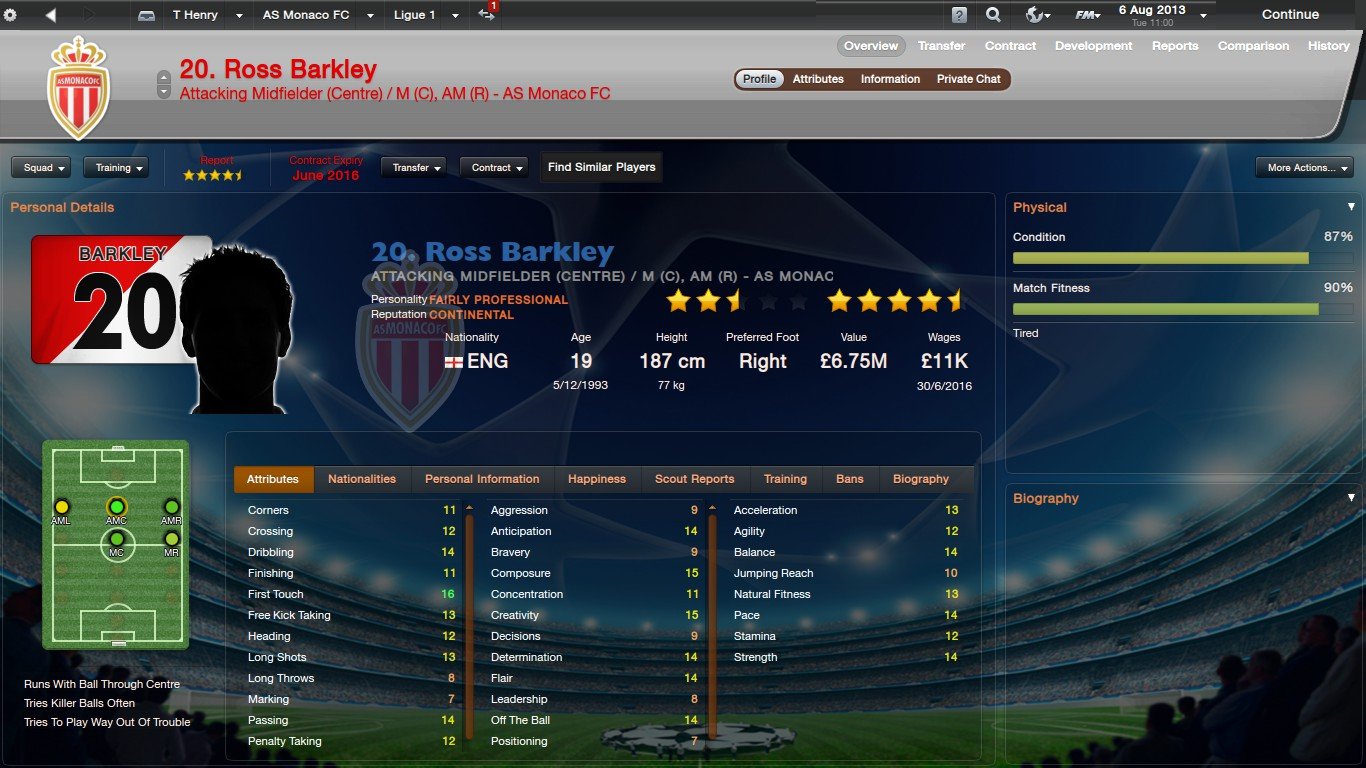 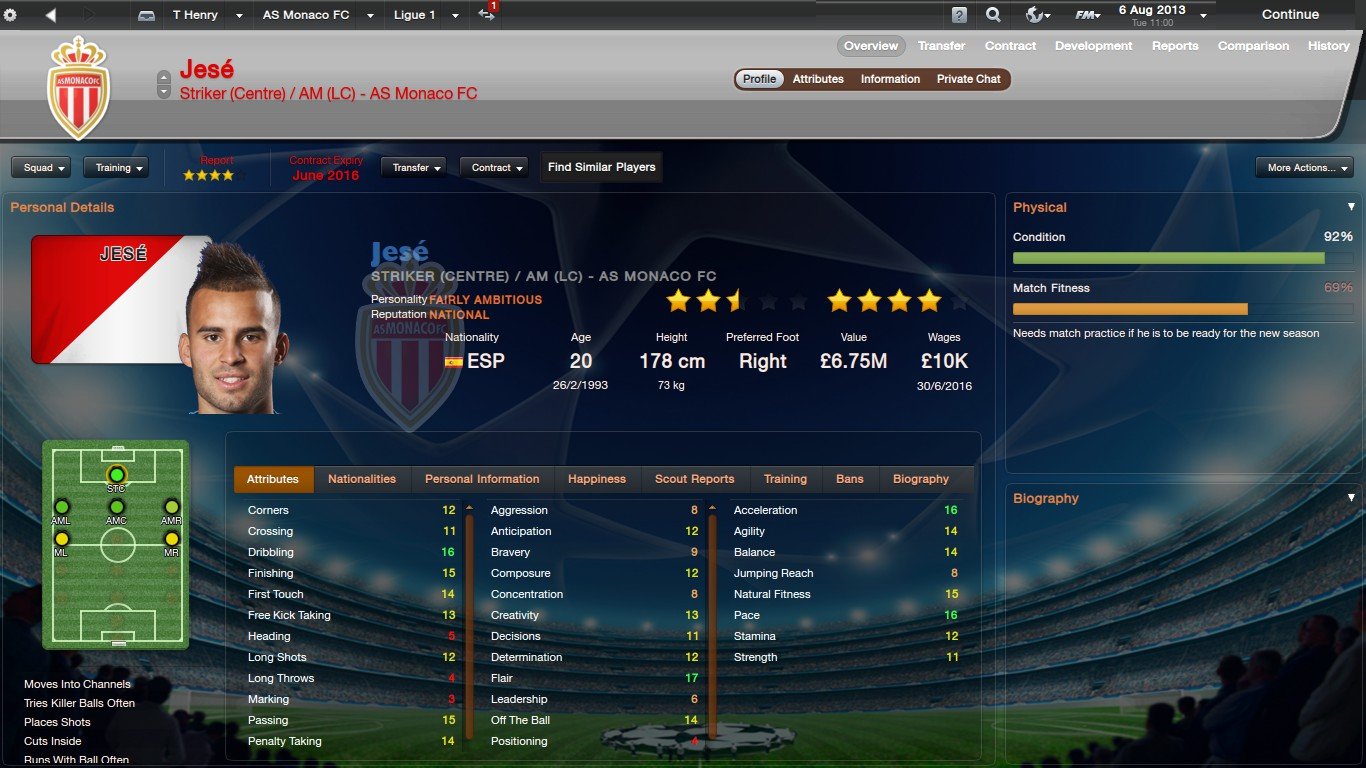 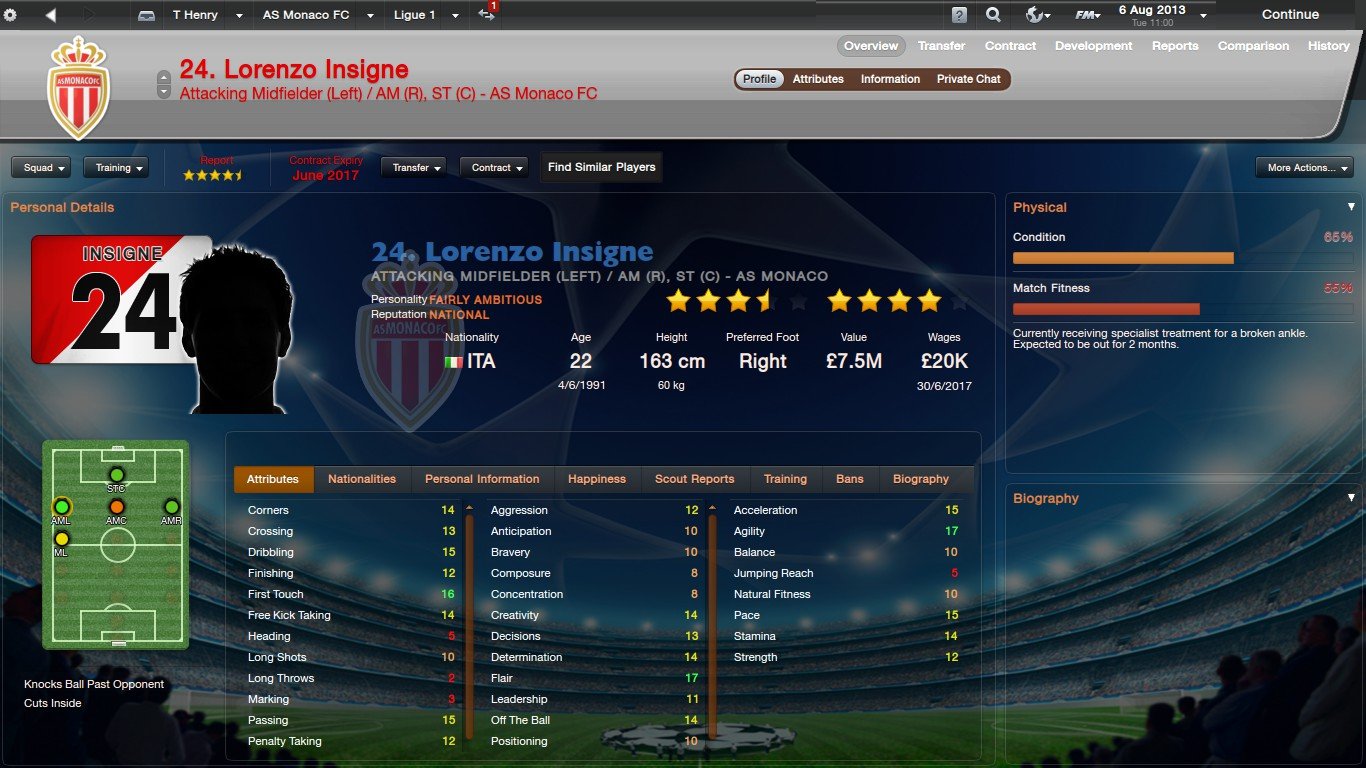 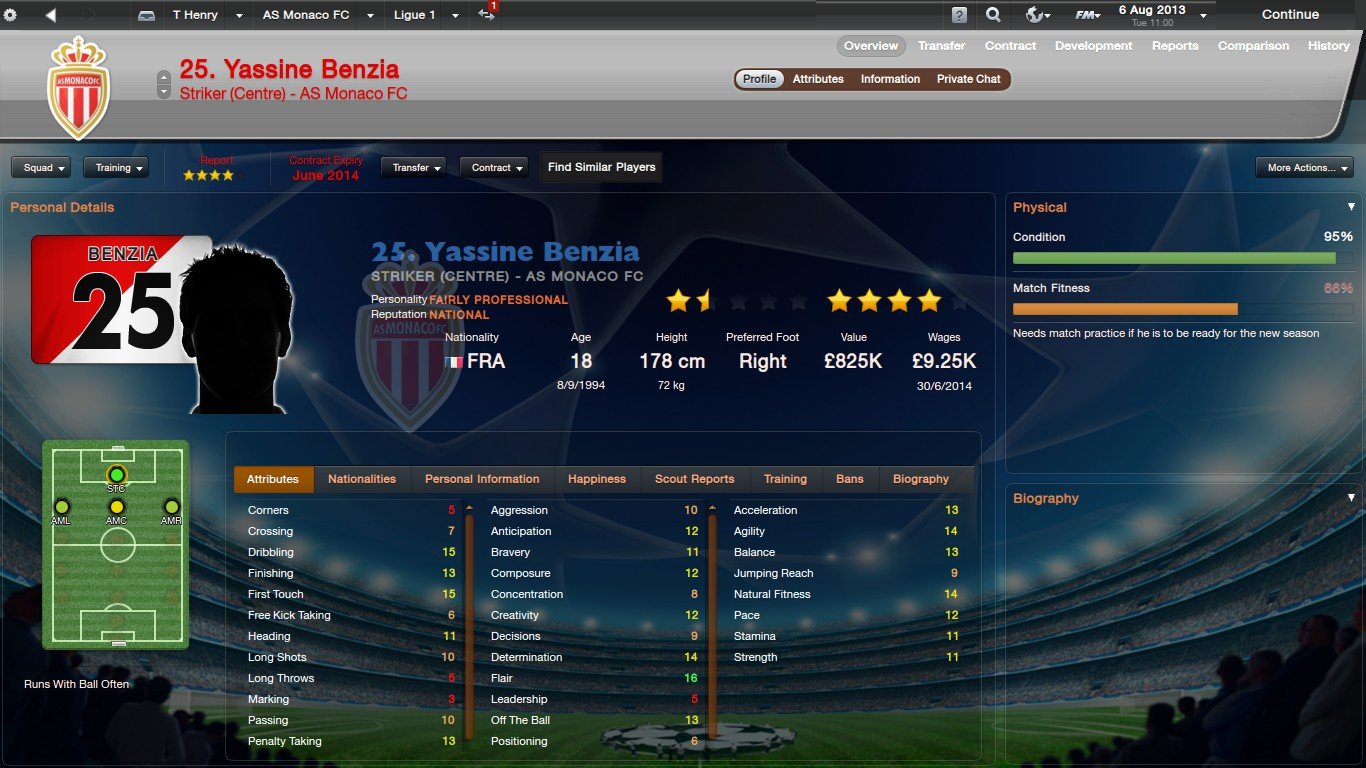 haha. Yeah I've tried to create a young squad which I can win trophies with so I can build my money up again and buy more players in 10/15 years

k1rups
7 years
WOAH...Varane that cheap?? Pogba that cheap??? Jeez you got in quickly with them! Did not see them happening haha please give benzia game time and he will become a beast like this 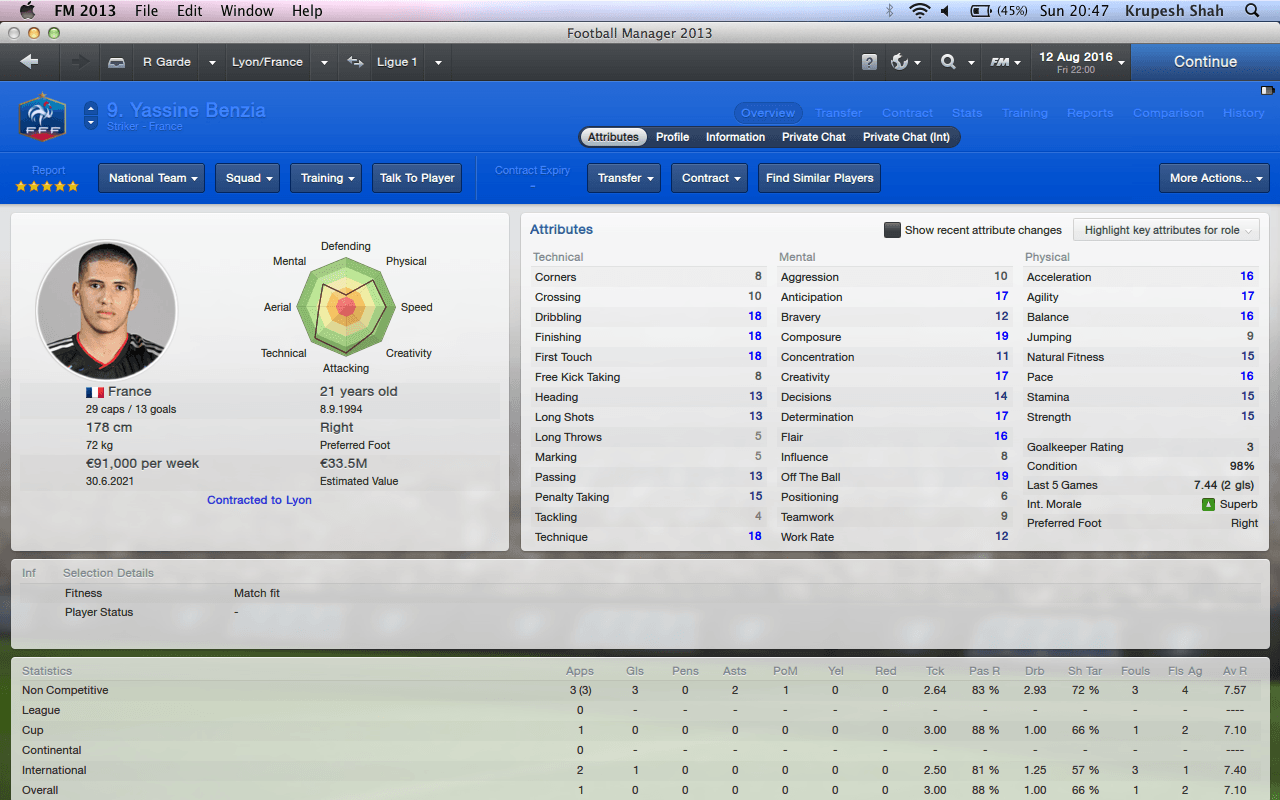 dan4rmnaija
7 years
120mil how did you pull that off...please teach me master!
Login to Quote

Arvind
7 years
Can't help but feel that you have used the editor here. Falcao should have just joined, and thus it should be close to impossible to sell him in the first place. AND you got 120m for him. Zouma, Varane, and Insigne also appeared to have 'doctored' fees. And please don't say "oh, I don't know, it just happened, dunno how I did it." That is the most used excuse for messing around with an editor.
Login to Quote

Radders2109
7 years
k1rups - Yeah to be honest I don't know how I got them that cheap, I thought they would have both gone for more than what I paid for. I will definitely be using Benzia, he's an utter beast!