Raphael Varane
Well, there's not much I can say about this game apart from that we capitalized on Bordeaux's mistakes. The shots were pretty much even, but when we had possession we used it better than they did, they just seemed to hoof the ball up to the strikers and hoped they would do something with the ball. Overall, I am very happy with the win because the new signings need time to gel together so to get a 0-3 win in the first game is very good. We now face Montpellier in the next league game looking for the three points to move up in the league! 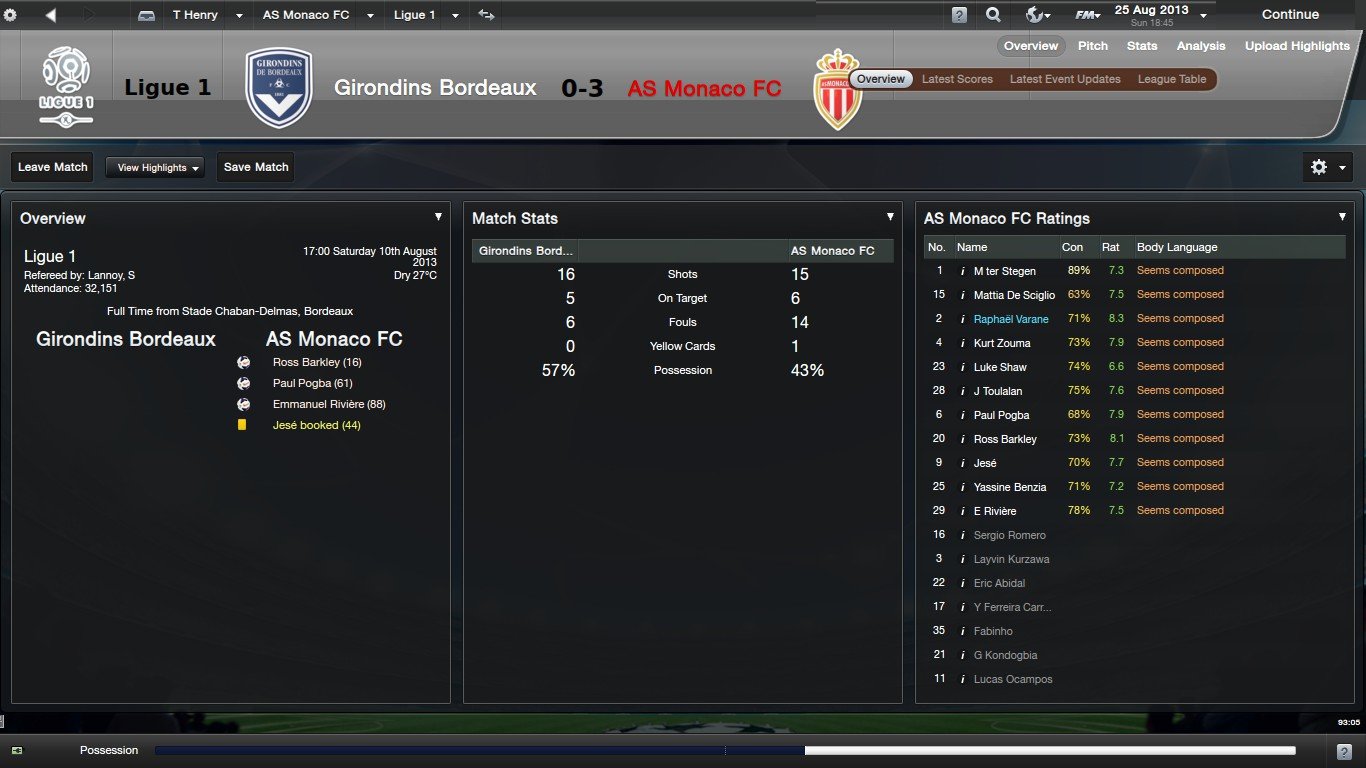 Jeremy Toulalan
This game was a very even game. Both teams had quite a lot of shots on goal, but missed opportunities cost us. When we did have possession we rarely threatened the Montpellier goal, in all fairness we were probably lucky to come away from this game with a draw. I guess it was a point gained which could prove vital towards the end of the season, we now move on to the game against Toulouse FC which we will try for the three points once again! 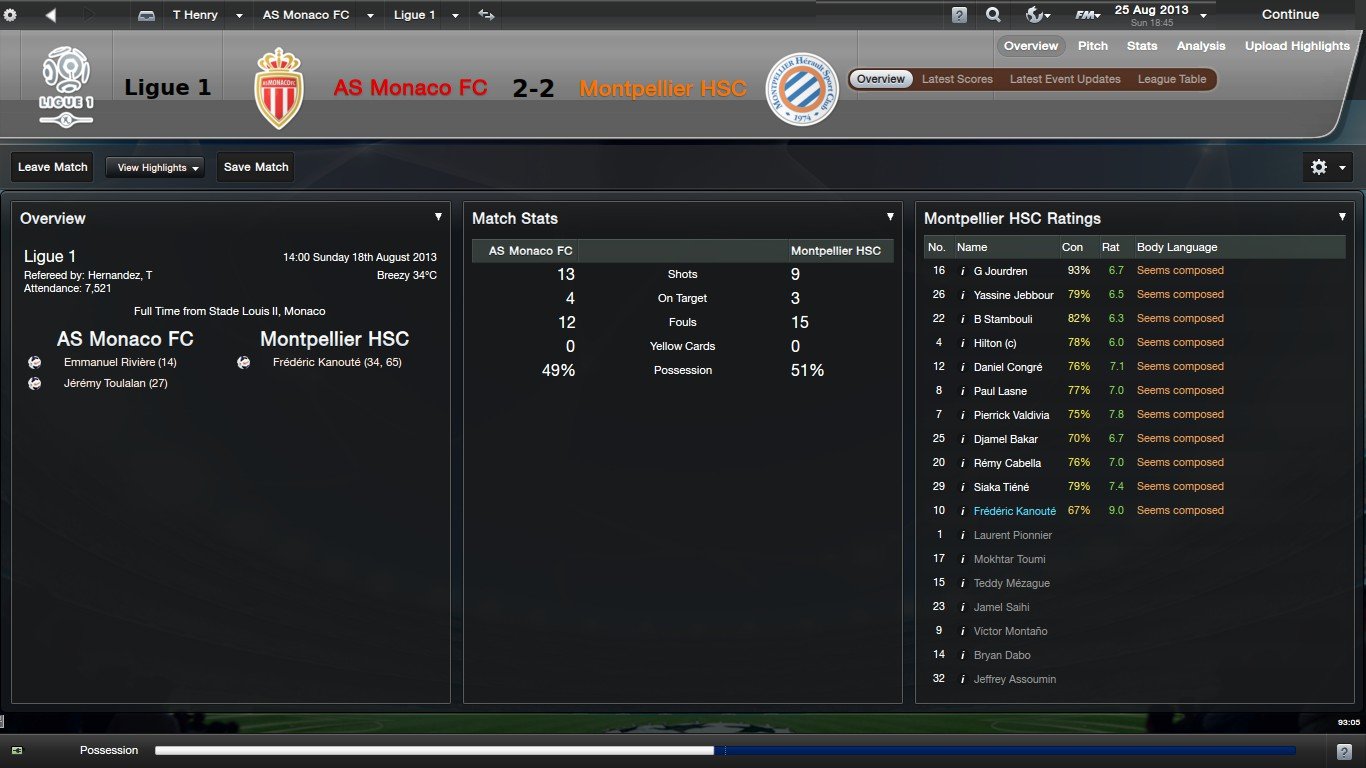 AS Monaco 0-1 Toulouse FC Attendance:8,461
Scorers: No scorers
http://www.fmscout.com/assets/icons/man-of-the-match.png Kurt Zouma
This was completely different to the Montpellier game, we dominated Toulouse and we could have been 2 or 3 nil up by half-time. Toulouse looked shaky at the back and we was creating a bucket load of chances we just couldn't get the ball into the net. I am disappointed with the result because like I said Toulouse looked a bad side but they got a bit of luck right at the end of the game. Our defense let Toulouse run through into our penalty box and have a crack on goal which unfortunately for us found the way into the back of the net. We should have been able tk close out the game and earn a point, it looks like we need to do some work in training on this as it could cost us games that we should be winning near to the end of the season and costs us valuable points.
https://fmshots.com/bk/kZQZv68.jpg 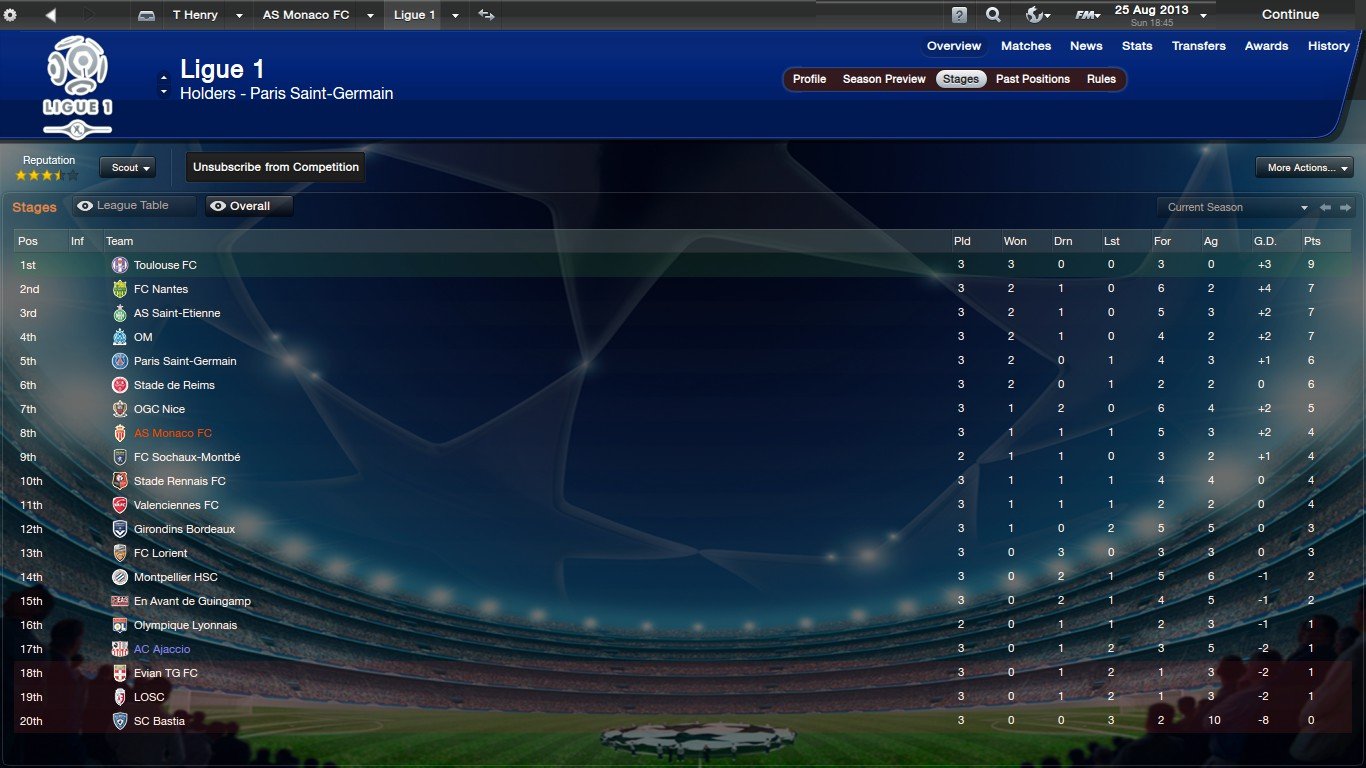 Player of The Month
Our player for the month of August was...Raphael Varane! He was a rock in the heart of the Monaco defense with him only being young as well it means that he has really bright future at Monaco!

It wasn't a bad month for the club but it wasn't a great month for the club either. Yes, I know the new signings need time to gel together and hopefully when they do that we will be firing on all cylinders. There was some great individual performances over the past month I just hope we can turn them into wins. I will see you all next month COME ON MONACO!!!!
Login to Quote

jeppefm
6 years
I enjoyed reading this! Planning to start a Monaco save myself. Seems to be a fun team to manage!

bebero
6 years
Not the best start.
A lucky win Toulouse !

Yeah Monaco are a very fun team to manage!

Radders2109
6 years
bebero - I hope I can pick it up, yeah Toulouse got very lucky indeed

BaggiesJames
6 years
Not a bad start to the season, should be able to clinch the title with the players you have:) good luck!
Login to Quote

Radders2109
6 years
BaggiesJames - Thanks mate, yeah we shouldn't be too far off the title 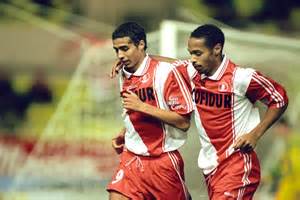 Usually it takes new managers a bit of time to settle in at their new club, but it seems that Thierry Henry is settling in at Monaco fairly quickly.

Henry, a former player at Monaco has said in the papers that he feels 'privileged and excited to be working at Monaco.

"Obviously I have good history here at the club, but I felt that it was unfinished. I would like to thank the chairman for giving me the opportunity to finish what I previously started here."

"Everyone has been great, the fans have taking to me very well the chairman has been fantastic and supported me since the start."

"I would like to give a special mention to the players though, they have made my job so much easier than it should be. They're all getting along together and helping me, we really are a unit here at Monaco and I am loving every minute of it!
Login to Quote

k1rups
6 years
Not a bad month mate but some tough results! The players should be doing more
Login to Quote

KieranFTW
6 years
Sorry, not going to read this, it's obvious you used the editor.

Real Madrid start with like 17 Million. There's no way they just grabbed 103 Million out of their arses and gave it to you.

Also, Pogba is worth way more than that and so is Varane.

You can use the editor, but I'm not going to read a cheat.
Login to Quote

ChloeAJLee
6 years
@Kieran Umm.. no he didn't use the editor, I know he hasn't even got it (as he shown me a image of his) and it didn't have a spanner (which indicates the editor) so before you question people, think about it next time -_-
Login to Quote

So you're saying Real Madrid pulled 103 Million out of their asses? haha, nice try wankstain.
Login to Quote

Radders2109
6 years
Kieran, don't you dare start calling people names when you don't even know the full story so go away. I didn't use the editor so hahahaha shove that one up your arse 'wankstain'
Login to Quote