Inquisition
6 years • Edited
Last season was a major break through for the Championship side, Watford. The Hornets reached new heights in their vision of a push for a spot in the 2013/14 Barclays Premier League. Fans were inspired and pundits were surprised. Italian manager, Gianfranco Zola, was even surprised at the sides movement in the second division.

The push went on till eventually the ever fateful playoffs emerged for the Watford. Facing off against Leicester in the first game, it seemed they already had their work cut out, yet still the Golden Boys marched on through to the final after a momentous game against the Foxes where Manuel Almunia and Troy Deeney were hailed as heros of the battle.

A truly inspiring performance from the team led to havoc on the pitch and many felt confident ahead of their final with fellow promotion pushers Crystal palace. Wembley was ahead and the Hornets were inbound. The fixture looked to be one to remember as both manager readied their teams.

The predictions were false and disaster struck Watford. In a drab match Palace managed to take the win with a single goal from veteran Kevin Phillips. Fans were devastated and questions were asked as the Eagles triumphantly walked away with their free ticket to the Premier League. A trophy many Watford fans thought they deserved

Yet what followed in the summer was to be the true surprise and disbelief. Watford owners, the Italian Pozzo Family sacked Zola. A risky move many thought, especially after the improvement of the club. Even more bewildering a young manager with no experience was hired. Fans were not happy. Many believed the lack of thought on behalf of the owners was disrespectful and ill advised.

25 year old Watford fan, Sam Fisher became the center of British media’s attention as the new revelation was unveiled by the Watford brass. The new hiring was such a surprise the Hornets celebrity and President, Elton John suffered a severe heart attack and passed away. 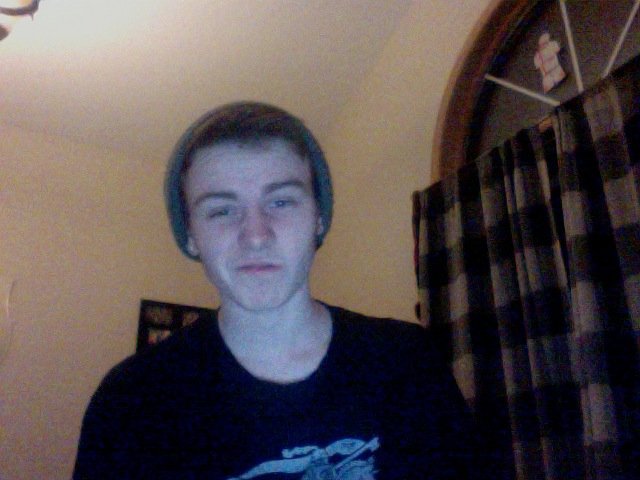 Fisher did not get off to a good start with the fans after a certain question Fisher answered was leaked to the public. The question being “ What kind of affect does the death of club idol and president, Elton John, have on the community?” which Fisher smugly replied “Well for one at least I won’t have to cover up my arse anymore.” 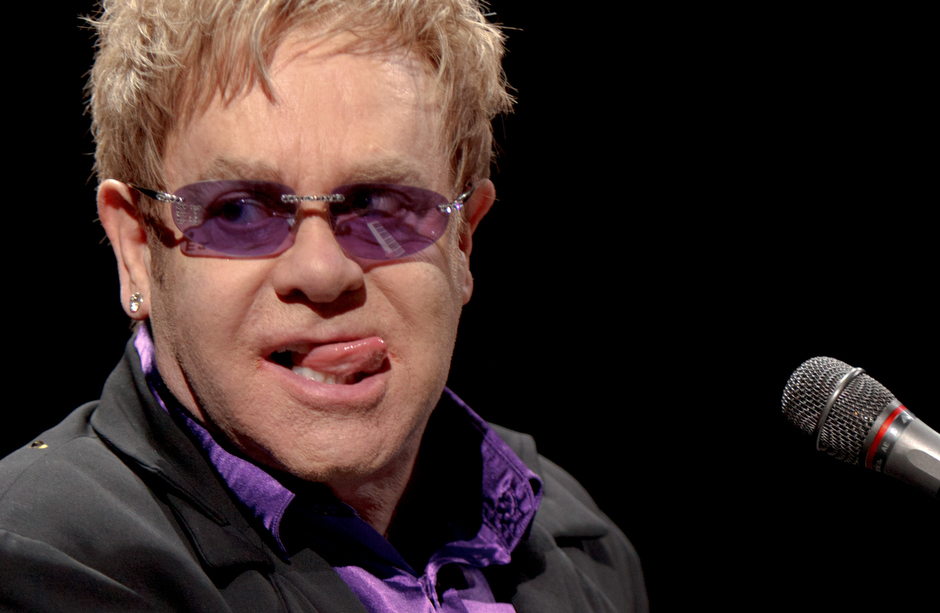 With an almost certain adventure surely ahead for the young manager in the Sky Bet Championship, the BBC has decided to document the story about to unfold.

Jer
6 years
Amazing. I won't have to cover up my arse anymore hahahaahahahahaha
1
Login to Quote

New Hornets manager Sam Fisher has gone about his business early at the Hertfordshire club by releasing the majority of the staff at Vicarage Lane. Replacing them within the a two day span. The predominantly Italian population were let go of in turn for a English group.

?Experts believe Fisher’s actions were in good merit to benefit the club and to bring back a more homely feel to the club despite the owners being Italian themselves. A battle won for the young Englishman. One can only expect the questioning he got when bringing the idea to the table. No less than twelve new faces have joined the club to help push for promotion this season.

As expected also assistant manager Adolfo Sormani has also been released of his post and former Crystal Palace manager Steve Kember has came in, in place of the Italian. At 64 years of age it is expected Kember will provide experience where it is needed.

On other news for the Hornet’s it has been made apparent that Fisher has been given a transfer kitty of approximately five million pounds to use towards gaining promotion. Word has got around that Fisher is looking to bolster the strike force and full backs.
Login to Quote

Good luck dude - Watford just got taken over in my Inter save and are splashing the moolah!
Login to Quote

Jer
6 years
Good luck mate, Watford do have a share of good prospects in the club 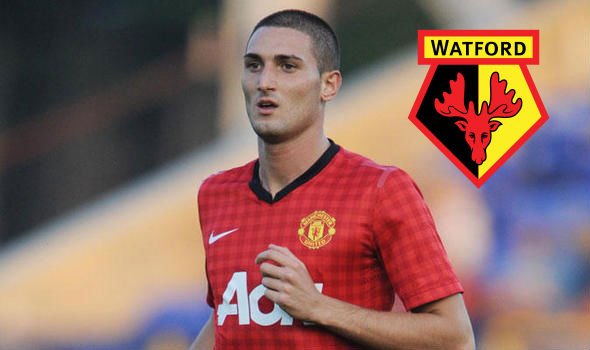 
Manchester United's Federico Macheda has signed for the Golden Boys. Costing Fisher a small fortune of one million pounds the signing of the Italian striker is seen as the perfect fit for the growing club. With the ever present Italian stars in the squad it'll be only a matter of time till Macheda fits in with the rest of them. Macheda also stated in the press conference this is his chance to really prove himself as a young rising striker. Especially after many United fans believed him to be a flop.

The two other signings come in as loanee's as Fisher looks to bolster the fullback positions. Liverpool's John Flanagan and Tottenham's Zeki Fryers both join the Hornets on season long loans to show their true potential a bring a name for themselves on Fisher's promotion crusade.


Watford striker Troy Deeney has beckoned on the on coming season after a successful preseason. Only tallying one goal prior to the season Deeney remains optimistic for the Hornets upcoming game against Birmingham in the season opener. The highlights of the interview with the striker was his excitement to have a second go at promotion to the Premier League. Stating:

"Last season we narrowly missed out on promotion. It was devastating but, we all know we can have a go again. You can see the desire in the lads and a promotion run is definitely on the cards."

When questioned about Watford's new manager; Sam Fisher, Deeney had this to say.

"When Sam came in a lot of us were skeptical, well all of us but hearing stuff from a true fan like Sam really made us understand how good we truly are. It definitely brings a new perspective for us and on the other hand a managing a club you're a die hard fan for provides that extra desire and motivation some managers lack. You honestly see the difference in training and I am certain we can push for Fisher, the fans and ourselves."


On a bright summers evening Birmingham City dismantled Fisher's Golden Boys in the Sky Bet Championship season opener. Fans looked in despair as Watford fell by the way side following a strong and successful preseason. The loss sending Watford to the bottom of the pile in the league.

Birmingham striker Lee Novak started the goal scoring on the 56th minute with a well time finish. Fryers followed up with scoring an embarrassing own goal on the 61st minute. Just when Fisher thought nothing could go worse Peter Lovenkrands scored an absolute worldy and not five minutes later Watford away supporters were seen leaving the stadium. Not the start the 25 year old manager was looking for at his beloved club. 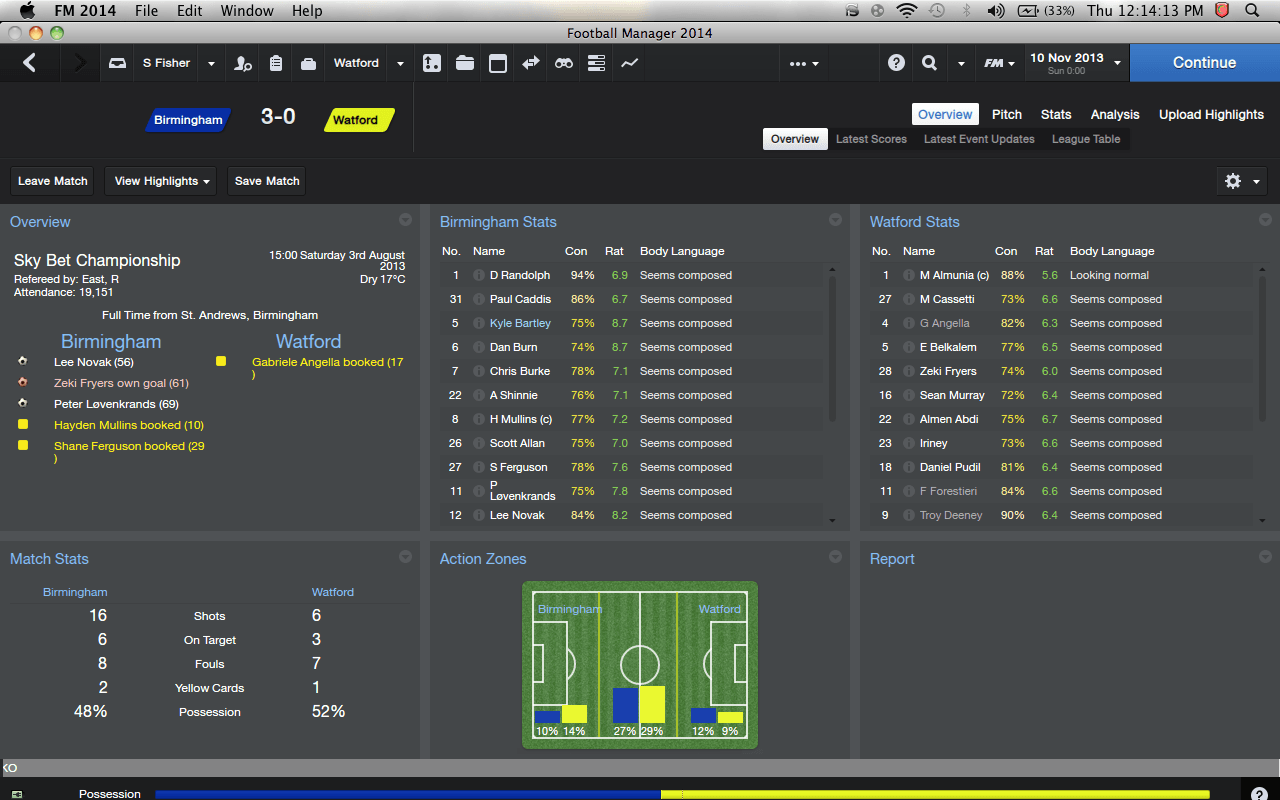 
The young Irish nineteen year old looks destined to compete in the premier league this season as many teams have set their eyes on the right midfielder. Even Manchester United's manager, David Moyes has expressed a keen interest in the prospect. Understandable as the nineteen year old bagged no less that seven goals in preseason fixtures along with many assists.

Rising up through the youth system makes him a real gem for the Watford establishment and truly shows their improvement in the area of youth development. Last season Murray made fifteen appearances for the Hornets. Not many for a so called rising star but, in all he performed tremendously and in that has gained a reputation.

Following the speculation of him leaving Fisher made a very direct comment in a press conference, "He is not for sale!" stated the young manager. 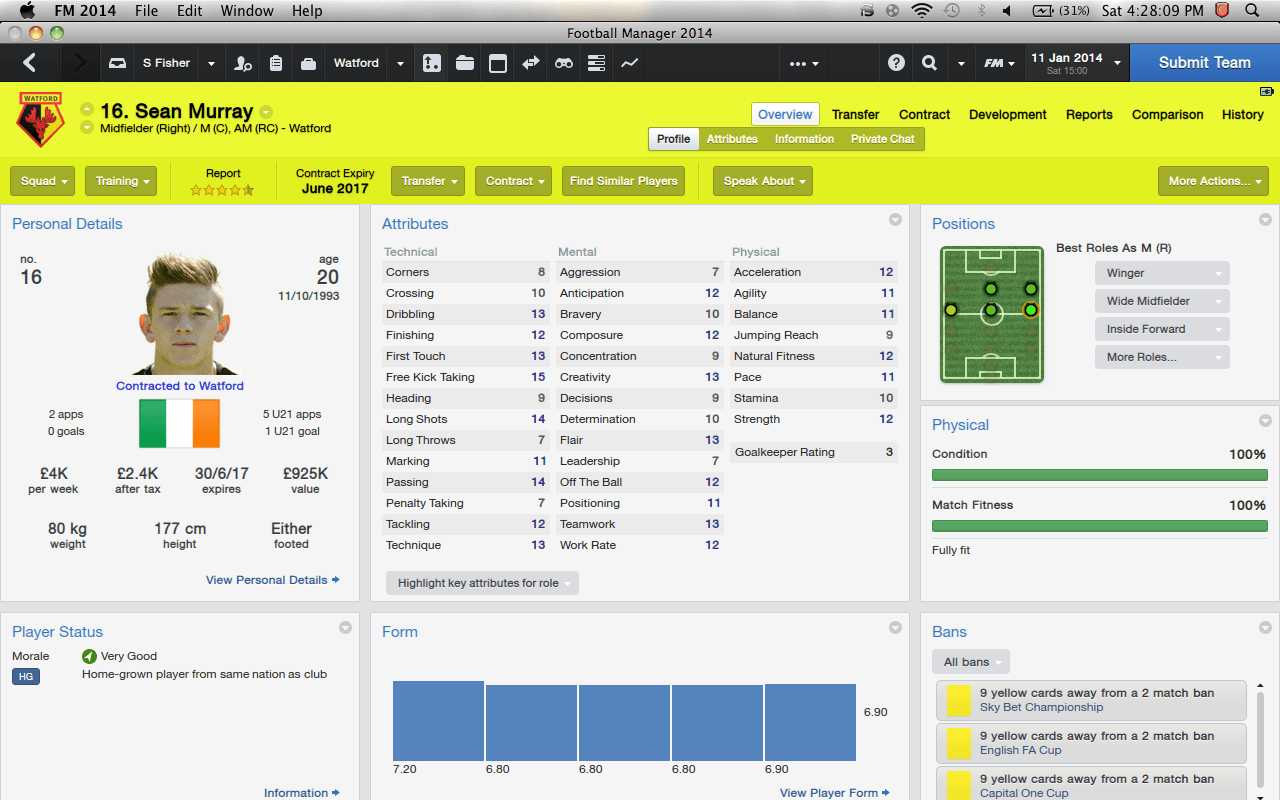 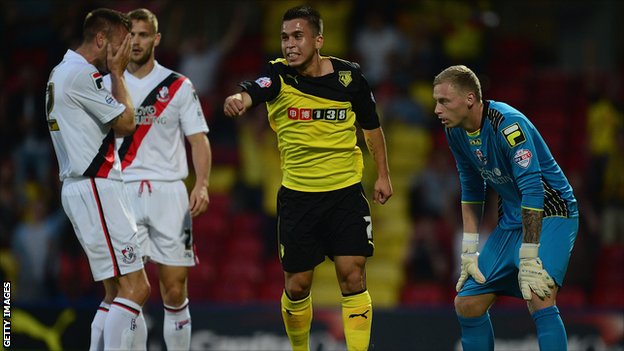 
Following a terrible start in the league, The Hornets quickly replied with a win in the Capital One Cup against Sky Bet League 2 side Exeter and Championship newcomers Bournemouth. Deeney was the most delighted player for this month as he was able to score a hatrick in only his second league match.

On other news at the end of the month Liverpool loanee went back to his club after being on the bench for the majority of the month.


The Watford faithful saw veteran Lloyd Doyley move to Bournemouth as Fisher found him surplus to requirements. Many find this a real shame as they thought the left back would retire at the club. Fisher has made it known that he has offered a future job as one of the staff to Doyley. It is expected Doyley will follow up on Fisher's offer as he started his career with Watford in the 2000-2001 season. A true veteran and legend of the club. 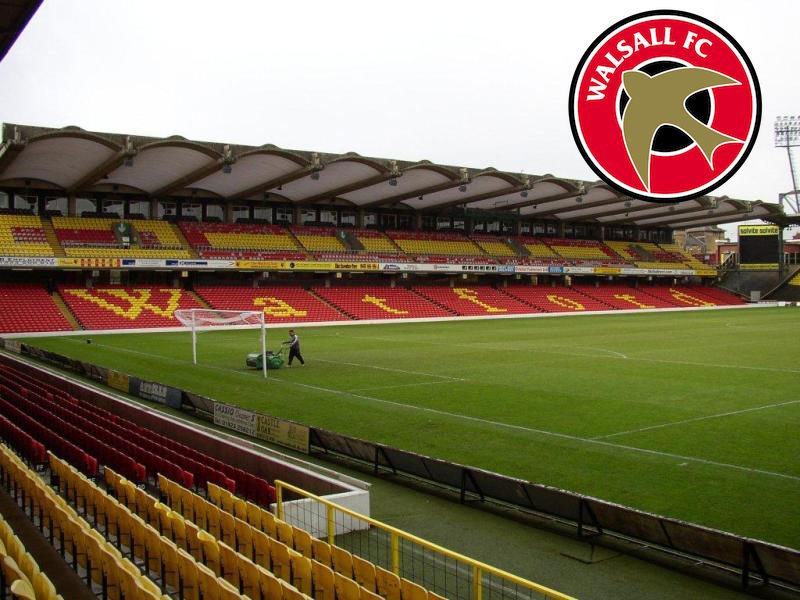 
Walsall have been flirting with the mouthwatering prospect of promotion to the Championship for many seasons now. Promotion is the big word in this and as The Golden Boys are also looking for a promotion it seems a good decision for both clubs to link up and offer a helping hand in each others promotion expectations.

Walsall's predominantly young squad makes them likely to become a real contender for promotion in the future. It also means Fisher will have first pick on some of the quality coming from the Walsall camp. A nice touch to the partnership for a rising club. It is expected Fisher will send a few players on loan to the League 1 side during the January transfer window to help bolster their promotions fight.
Login to Quote


A month of draws for Watford football club where the only win comes against under performing Wigan. Despite the draws Watford remain up the table in fourth position. An unusual siting has came out of the club as a youngster under the name 'Tommie Hoban' has arose as a starting XI player after turning in some quality shifts for the Golden Boys.

Verdinho
6 years
A mini cup scalp there. Not bad

You are reading "The Hornets".