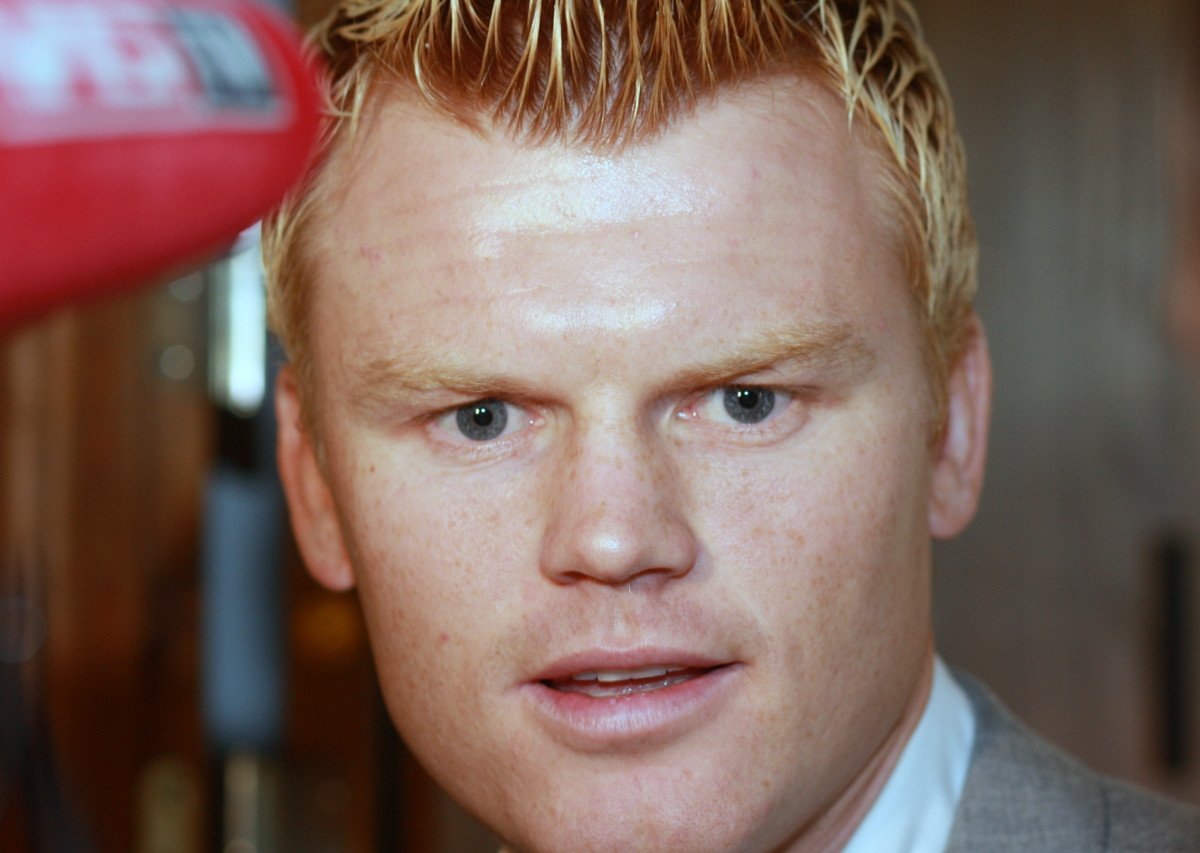 The former Liverpool legend says that leaving Fulham, was ideal after only playing 5 matches for the weak side Fulham.

The 18th of January he was hired as manager of Norwegian Second Division club Åsane IL who is predicted to be number 10th in the league. He also added in comments saying that he will take Åsane IL to the Norwegian Tippeligaen, which is the highest division in Norway. He also stated that he saw the club perfect becuase the kit has the same hair color as him!

His career has been long for the 33 year old Norwegian man, who played over 110 international matches for Norway. He has also been at clubs like AS Monaco, Liverpool FC, AS Roma and Fulham FC.
Login to Quote 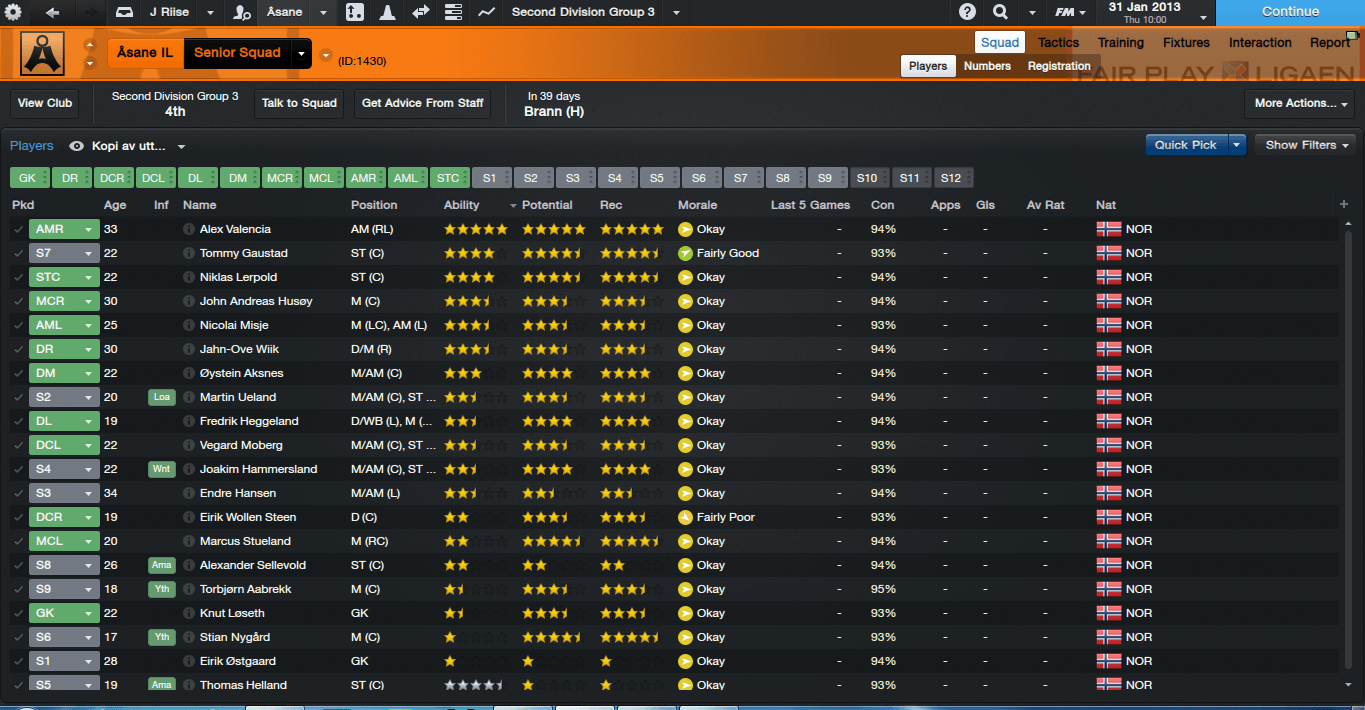 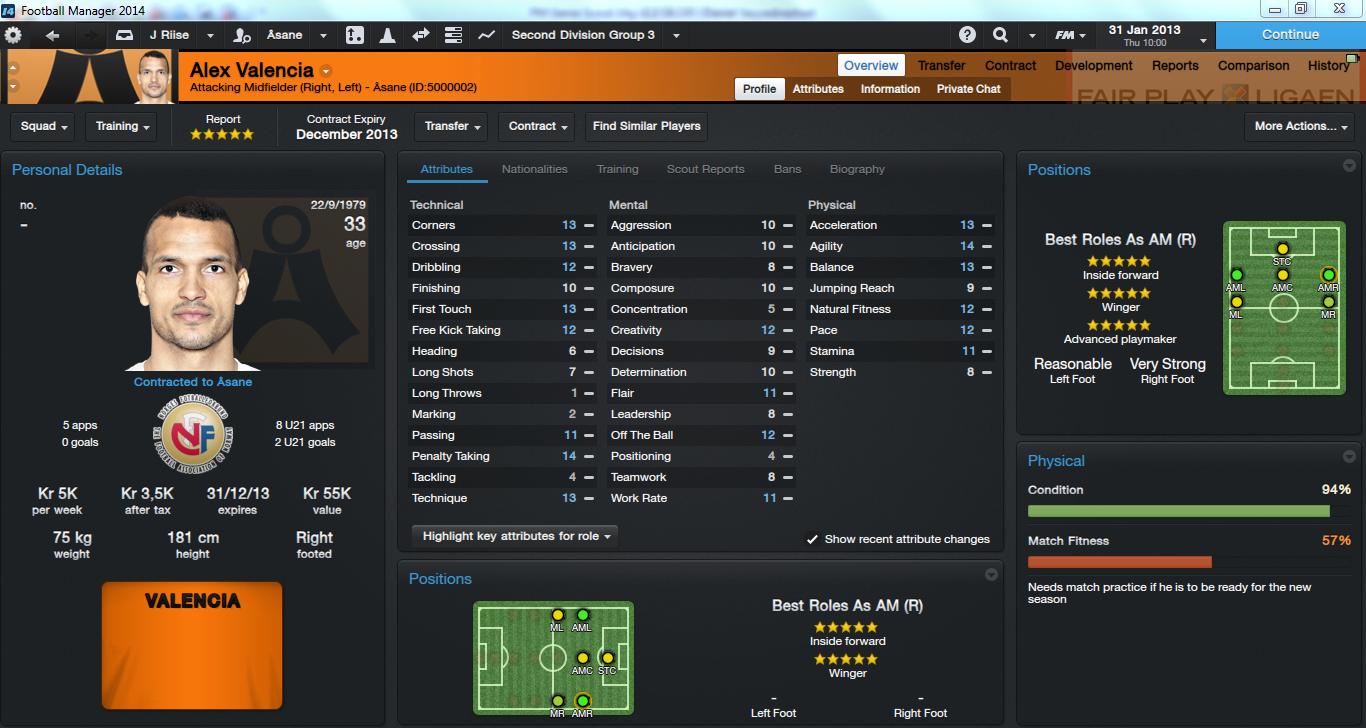 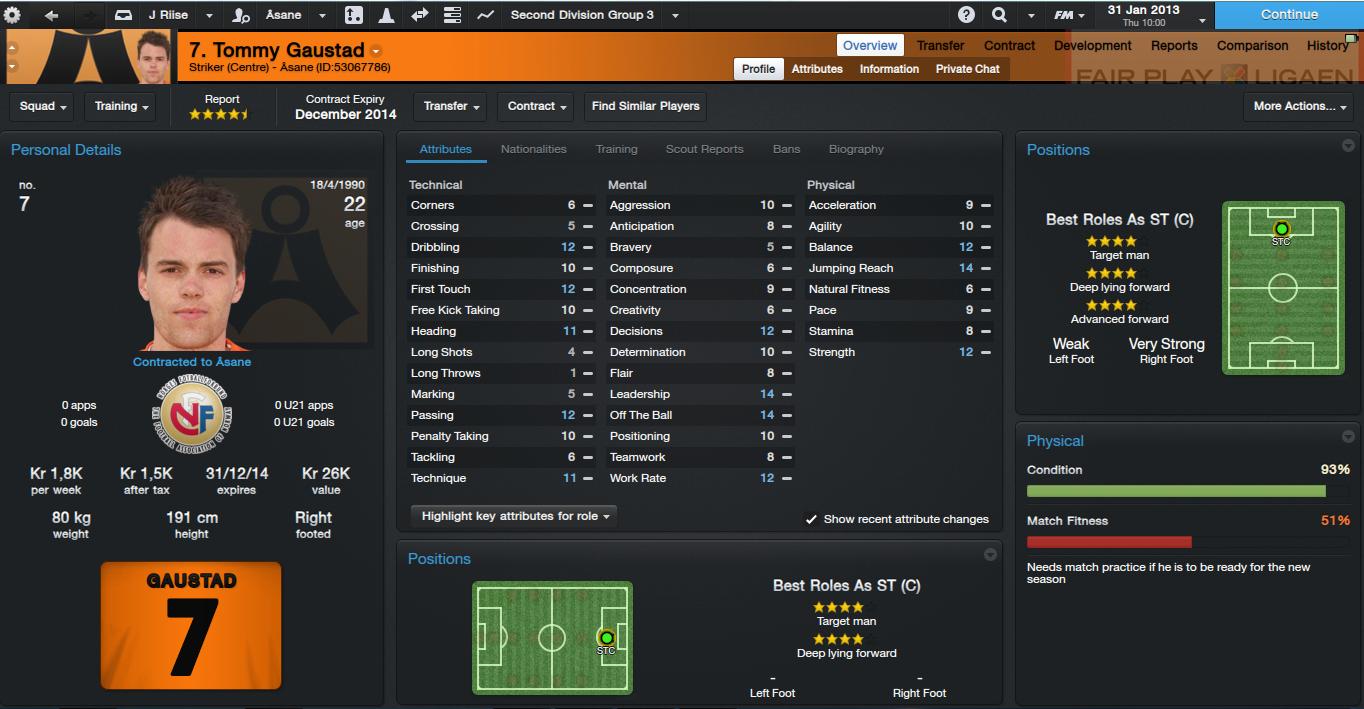 The 22 year old striker will be hard to keep as i've already got alot of bid on him. He will be a great player in my squad. 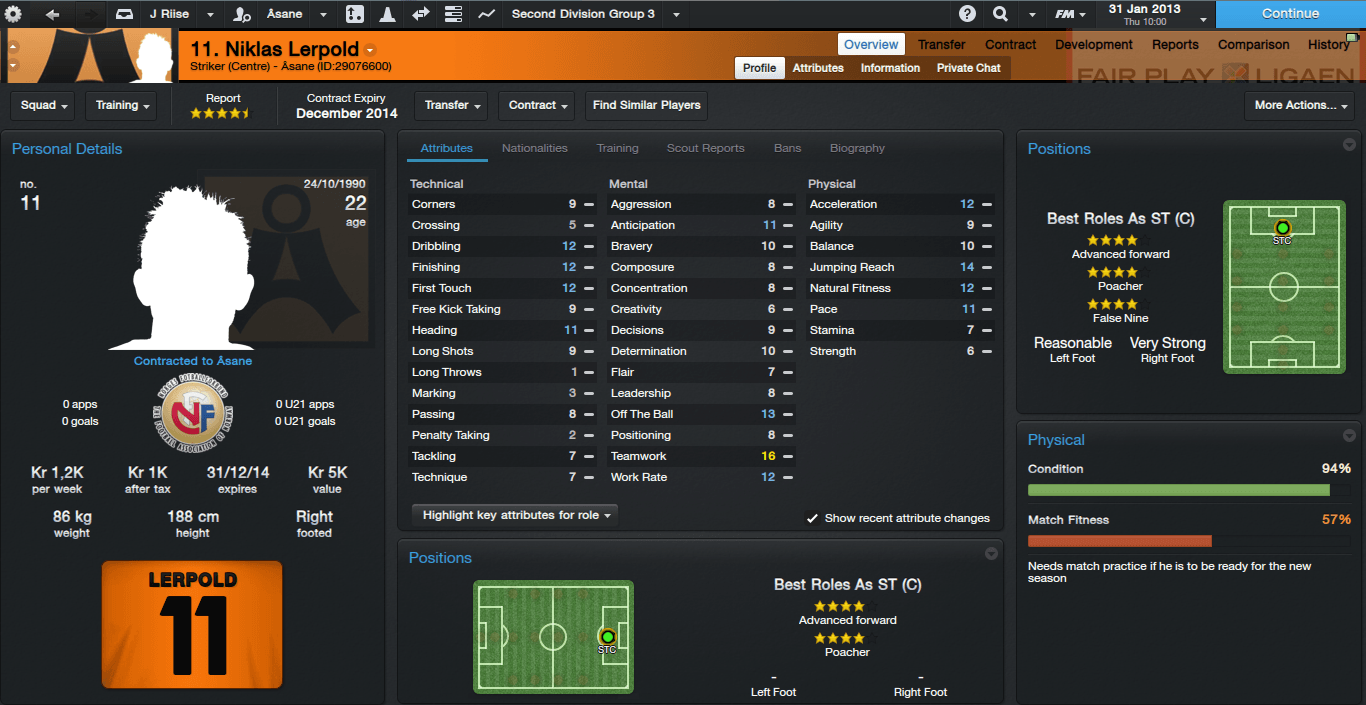 Another striker, as you see my team is pretty good offensive so that will be great, not so sure about the defence anyhow Niklas will be vital for me as I will need players scoring 15+ goals for me.


Since Brann is my affiliated club and their second team is in my league and predicted to win the Second League, I will be snapping up some of their players on loan.


If you would like to have a screenshot of any player just write a comment :)
Also I will be doing monthly updates when I am done with the pre-season
Login to Quote

The 510 Series
8 years
Fulham are amazing!

Viaza
8 years
The pre-season is now over, we had some hard matches against our affiliated club Brann were we lost 1-3

A quick goal after 16 minute from Brann's striker Erik Huseklepp to put them to 0-1, but 2 minutes later Nicolai Misje the former Brann player scored a fine goal, but two goals before half time from Brann's new signing Jakob Orlov took Brann to victory.

In the next match against the small team John Arne Riise took his first victory winning 3-1 with two goals from the 22th year old striker Vegard Moberg and one from Alex Valencia took secure the win after being down from a goal from Kai-Henry Haugen.

In the next match for John Arne Riise it was First Division club Bryne that was coming to Bergen to play Åsane. Bryne took the lead after only 24 minute with a goal from Vegar Landro, but Niklas Lerpold saved Åsane with a goal in the 82 minute.

In the last friendly game for John Arne Riise's Åsane, First Division club Vard came to Bergen, but it wasnt the result they where hoping from before the match. A quick goal from Vard's right midfielder Ole Christian Langeland after 16 minute to take the lead but Alex Valencia scored after 27 minute, but Vard tried hard and they got the goal before halftime when Daniel Grønning scored with a header after 40 minute. 62 minute in the game and Valencia does it 2-2, and with a amazing free kick from Daniel Kalstad to score 3-2 in the 87th minute to win the game. 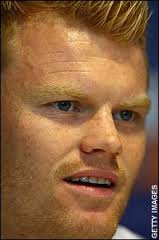 It has been a great pre-season we also want to announce 3 new players - Thomas Ness a left back defender who can also play attacking midfielder, who came in on a free transfer 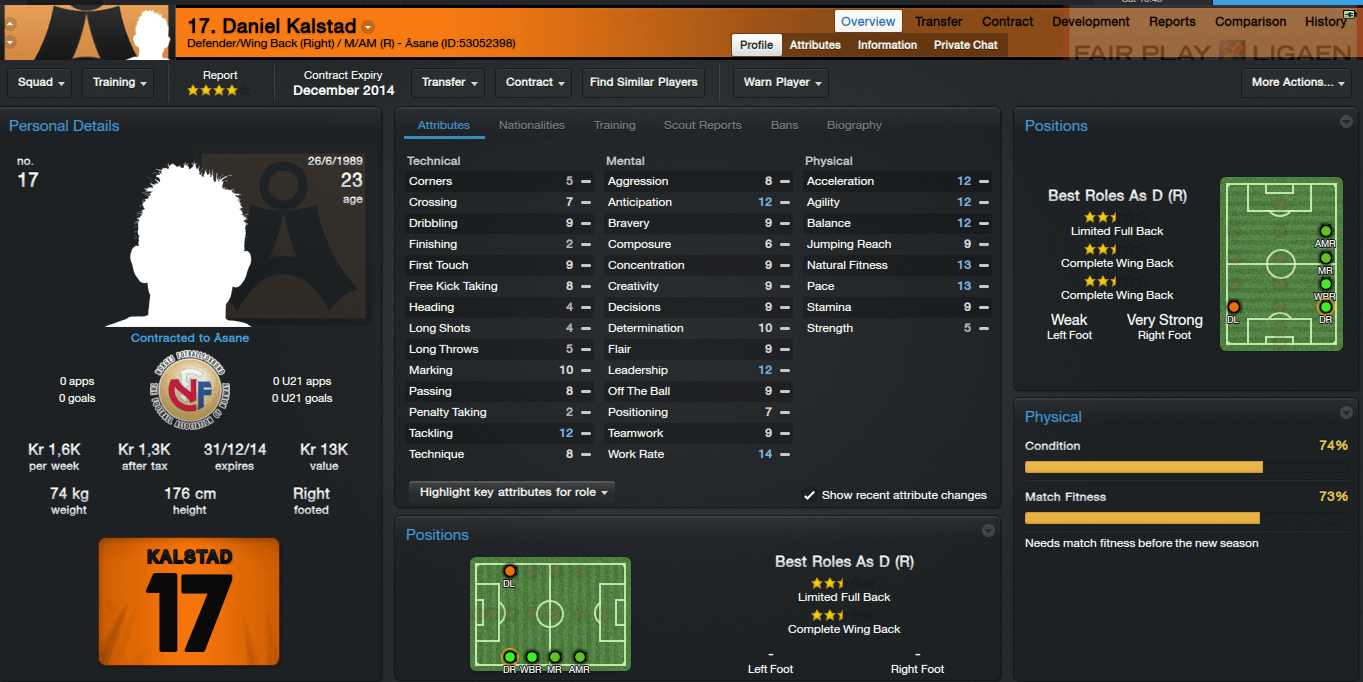 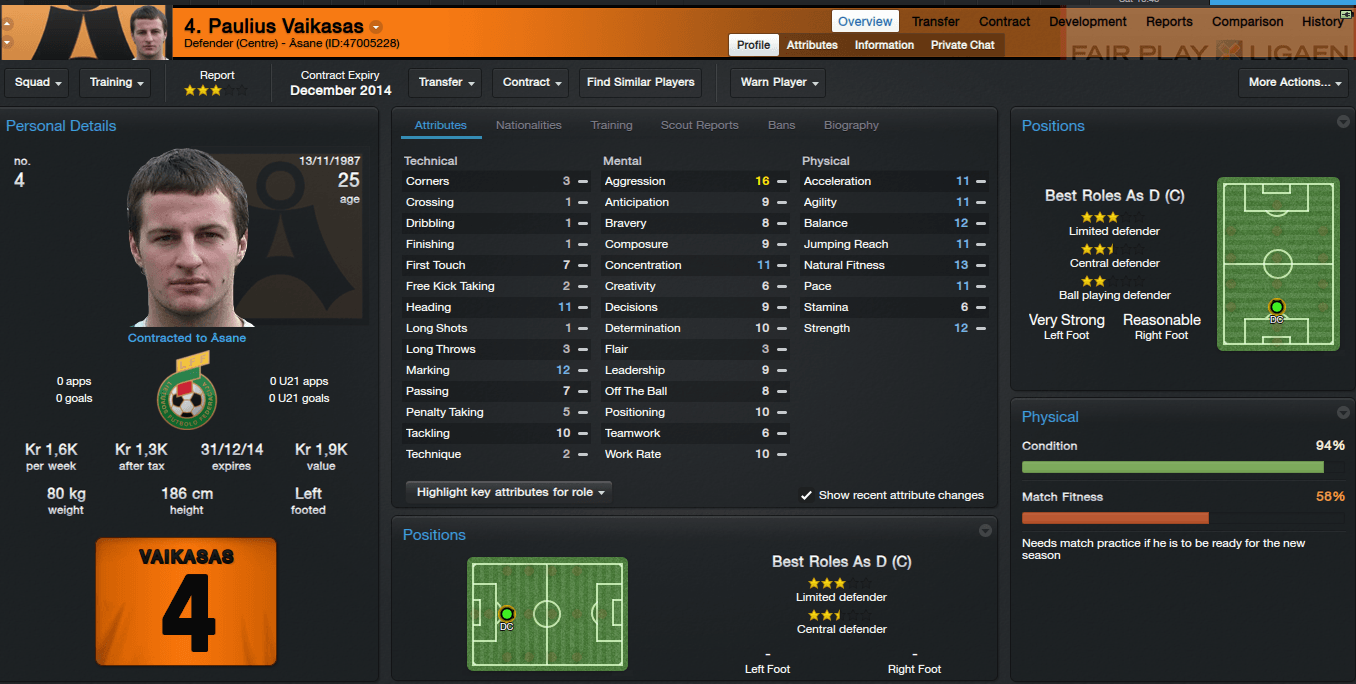 And out goes goal keeper Eirik Østgaard on a free transfer

Yeah I dont think so haha

Viaza
8 years
We played three league matches this month against some good teams, but not as good as us.

In the first match we played away against Ålgård, a strong side but we managed to win the game with two goals from our strikers Niklas Lerpold after 36 minutes, and Tommy Gaustad to score the last one in the 60th minute. 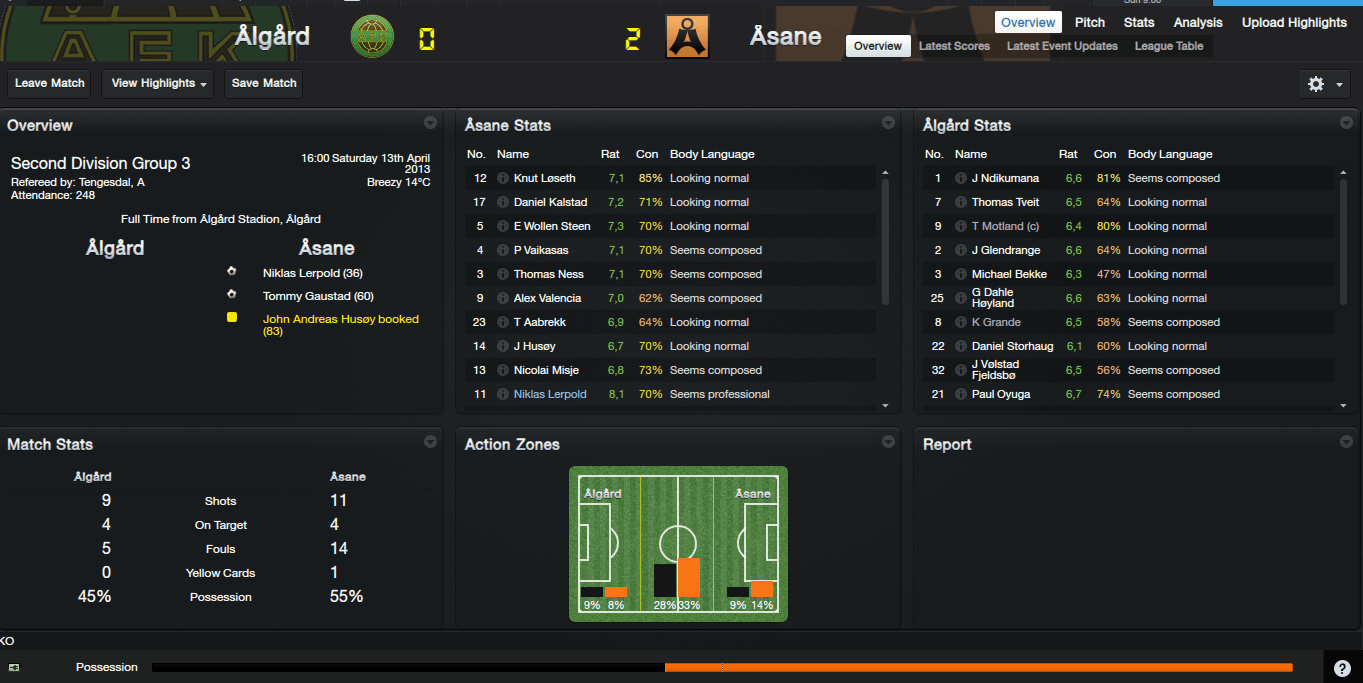 Against Brann 2 it was an easy match as controlled most of the game.
A goal right before half time from Nicolai Misje (45+2min) and one from Daniel Kalstad in the 47 minute to make it 2-0, before Tommy Gaustad (78min) scored the last one. We also had Alex Valencia injured but he is back for us now.

In the last match against Vindbjart we had an easy victory when in the 11th minute Joakim Hammersland scored to make it 1-0, in the 25th minute Niklas Lerpold puts it in the make it 2-0 and 10 minute later he does it again to 3-0, Vindbjart tried hard and finally succeeded to in the 67th minute they finally got a goal from Daniel Aase, but Tommy Gaustad was there again in the 78th minute he makes it 4-1 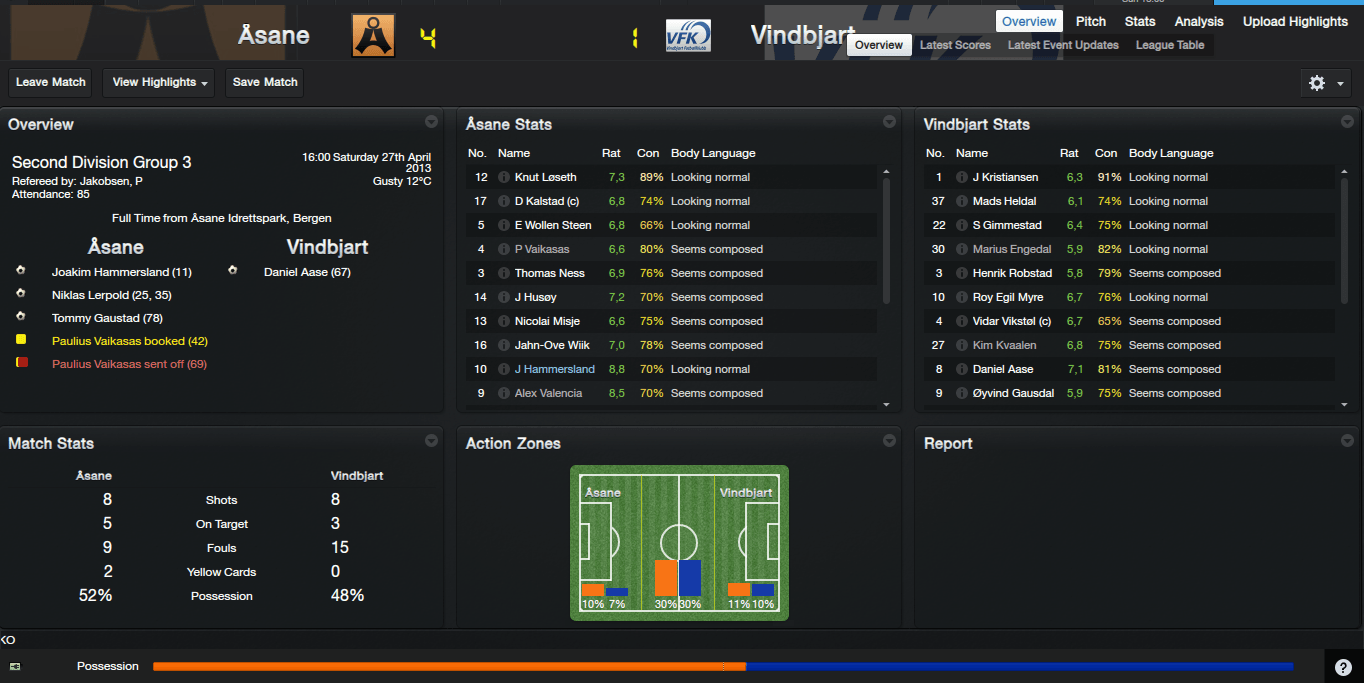 It was a great month and we are 1st place with 9 points. We played excellent but in the last match against Vindbjart we had an unnecessary red card from Paulius Vaikasas in the 69th minute, otherwise a great month. In the next match we will be playing in the Norwegian Cup against the small team Åkra were we are hoping for a big win.

Viaza
8 years
An okay month we started off well but at the end we collapsed, playing seven matches starting off against Åkra in the Norwegian Cup.

A goal from Nicolai Misje, three goals from Niklas Lerpold and one from penalty mark from Thomas Ness to make it 5-1 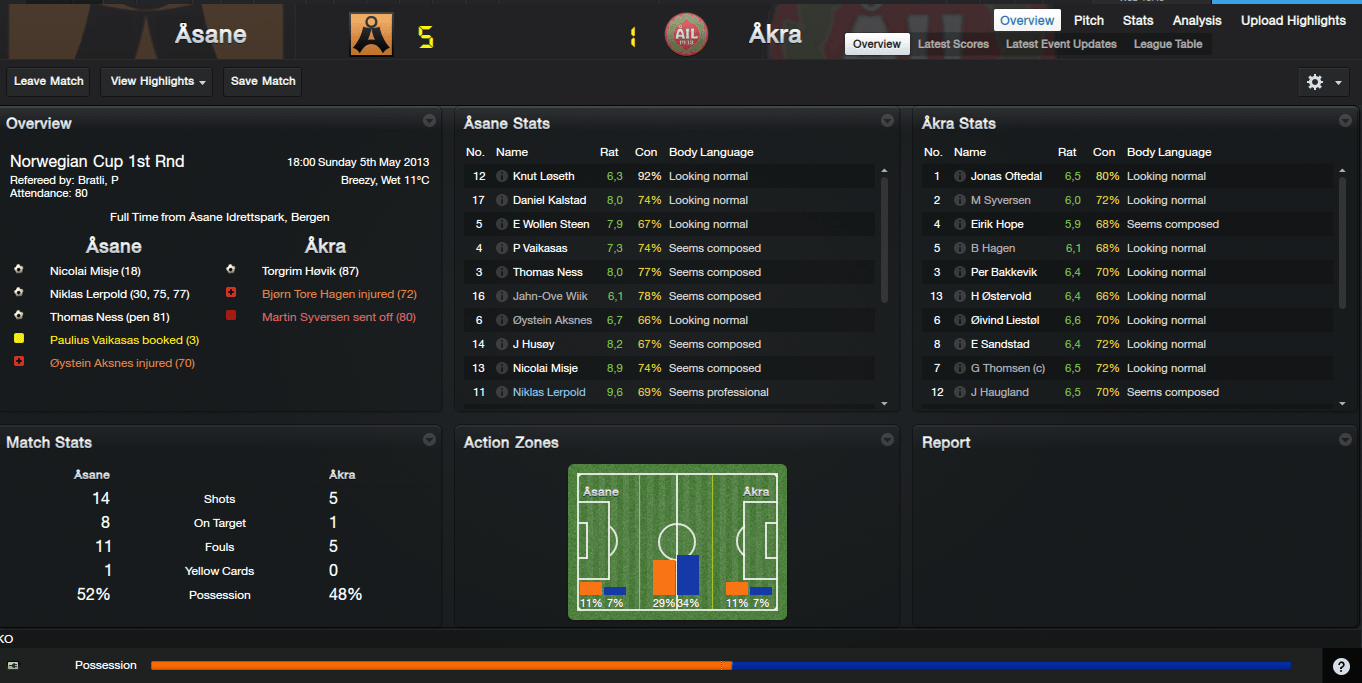 In the next match against the rivals Arna Bjørnar two goals from Niklas Lerpold (18 & 66min) to make it 2-0 and win the match.

Egersund was the next opponent for John Arne Riise's Åsane IL as they destroy them 0-4 away with goals from Jahn-Ove Wiik (33), Niklas Lerpold (62), Martin Ueland (76) and the last goal to make it 0-4 own goal from Miguel Diez (87)

After beating Åkra in the first round of the Norwegian Cup, Vard was the next opponent, they took the lead after only 5 minute to make it 0-1 with a goal from Andreas Ravndal (5) and again to make it 0-2 Simen Grov (25), but we tried hard and Tommy Gaustad scores after 34 minute to make 1-2, in the beginning of the second half he does it again 2-2 (47) and at the 68 minute to do a hatrick, we win the game 3-2.

For the next match Fløy came to visit us, they have a strong sqaud and showed it against us beating us 0-3 with two goals from Kolbeinn Karason (17 & 81) and Lars Kristian Pedersen at 86 minute.

The cup had been running smoothly for us, but in the next match against First division club Tronmsdalen away we had a hard time, already after 22 minute our player Jahn-Ove Wiik got injured and right before half time Tromsdalen's striker Mo made it 1-0 and we lost 1-0 away

It has been a hard month but it started off well and we made it to the third round of the Norwegian Cup. I felt we had alot of matches seeing they where very close playing and we had alot of injuries at the end of the month. We are now second in the league being 3 points away from Fløy. Hopefully we can win all the next matches next month when we are meeting Fyllyingsdalen to start of the month.

You are reading "John Arne Riise - The Legend Returns to Norway".