@ASR: Thanks a lot pal

@Feliks: Yep, in fairness Italy were the better team but a win is a win!
Login to Quote

Tallery
8 years
A good win against a side that is always strong.
Login to Quote

pompeyblue
8 years
Good win man, you can go all the way! 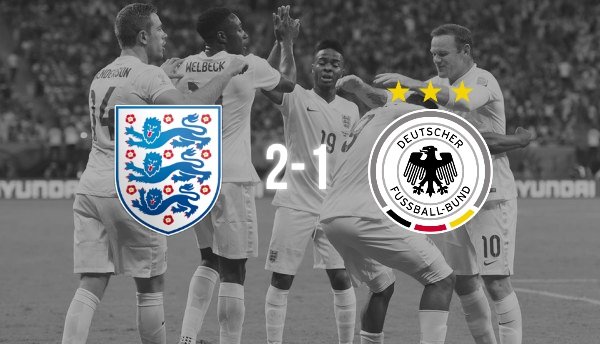 A brace from Danny Welbeck sends England through into the semi-finals as they beat Germany by two goals to one.

After England's triumph against Italy, they were set to face rivals Germany who had a disappointing World Cup. Joachim Löw's squad still has players such as Marco Reus and Mats Hummels within the ranks making this game the biggest yet in the tournament due to the stature and rivalry between both teams.

England kicked off, with Henderson playing the ball up towards Lallana, who passed it back to Clyne. Germany had three players rotating between themselves to press the England player in possession, however clever work from Clyne allowed him to evade the challenge from Draxler and knock the ball up-field to Welbeck and the Manchester United forward skipped past Boateng before releasing a powerful shot towards the bottom corner forcing Neuer to make the first save of the game as it tipped it behind the post for a corner. Lallana took the corner and Caulker rose up highest but headed over the crossbar.

The Germans then had their first attack of the game as Özil played a smart pass towards Reus, who ran at Baines and neatly turned past the full-back. The Germans piled men into the box as Reus lifted the ball into the England box and Khedira made contact with his head but Hart was on his toes as he easily caught the ball and threw it out to safety. Roy Hodgson looked furious with his teams defending.

However, it was England who took the lead as Henderson found Carrick who dinked the ball over towards Oxlade-Chamberlain, who chested the ball towards his right and started running down the wing. The Arsenal winger then looked out and saw Welbeck in open space, he hit the ball towards Welbeck who returned it by curling a pass around Gündoğan. Oxlade-Chamberlain easily collected the ball and drilled it low and hard through the six yard box which Welbeck ran into and slid the ball into the net to make it 1-0. Welbeck slid the ball into the bottom corner past Neuer after Oxlade-Chamberlain drilled a low cross towards the striker.

England looked set to sit back for the remainder of the half, with Lallana and Oxlade-Chamberlain coming into a more central role to narrow the German play. Jung played a pass forward to Khedira, who turned neatly and drilled the ball forward past Clyne and into the path of Draxler, who weaved past Cahill and laid the ball off to the incoming Özil who side-footed the ball towards the bottom corner forcing Hart to turn the ball behind for a corner.

Reus took the corner and hit it high towards the far post where Hummels and Cahill fought for the ball, Cahill was shoved aside by Hummels which made the England defender protest to the referee but he did not pay any attention as Hummels headed the ball across the 6 yard box and Draxler was able to make contact with the ball and diverted it past Joe Hart and into the back of the net. The referee then blew his whistle to mark the end of the first half in which the whole England team went up to him and protested about the goal.

Germany kicked off the second half in a positive manner after scoring an equaliser just before the end of the first half. Khedira held up play for a few moments before spraying the ball to his left towards Reus, who produced a piece of excellence as he turned past Baines and cross in the ball which was well defended by Cahill as he got in-front of Müller and headed the ball away towards safety.

England started the dominate the midfield as Henderson kept it simple by playing a pass towards Lallana, who knocked it back to the Liverpool midfielder. He then found Jones who started to run forwards with the ball and dinked it over Khedira to Welbeck, who turned and ran at the German back four, sprinting past Boateng and finding Oxlade-Chamberlain on the left. He then cut inside and took a powerful shot at goal but Neuer stood up tall and pushed it away and out of danger.

However, England got themselves back in-front as Carrick was fouled 30 yards from goal resulting in an England free-kick. Henderson drifted the ball into the near post where Welbeck rose the highest and diverted the ball towards goal, hitting the bottom of the crossbar and fooling Neuer as the German number one fell back into the ball as it went past the line and into the back of the net. Welbeck took credit for the goal as his header was on target. Henderson assisted Welbeck for the goal as his free-kick drifted towards the head of Welbeck who diverted it into the net.

Germany started the assault the England goal more often now, with up to 6 players in England's final third at one time. Hodgson instructed his men to stay in shape and keep disciplined for the remainder of the game but the England defence was getting stretch with Germany switching the ball between opposite wingers however Michael Carrick confidently stopped Reus in his tracks and cleared the ball to safety.

The attacks kept coming thick and fast and Germany won a corner in injury time with Neuer advancing forward into the box. Reus whipped the ball in towards Hummels who hit the crossbar with his thunderous header and before the ball could fall back towards a German player, Joe Hart jumped high in the air to collect the ball and kick it away and out of danger as the referee blew for full time meaning that England were through into the semi-finals of Euro 2016.


"Yet again the whole team performed extremely well. We were strong in all areas and showed just how good we can be on the day. Danny was excellent today, he is proving to everyone that he is a calm and composed finisher with a lot of to offer any team. He should be proud of his performance today, as should the whole team, they worked together very well and we now look ahead to the semi-final with great anticipation."

Great win Josh, especially seeing as it was against the Germans. Keep this up and you will win the Euro's no problems

Great win Josh, especially seeing as it was against the Germans. Keep this up and you will win the Euro's no problems

Yep, you heard right, DANNY WELBECK! Thanks a lot Josh! Going to be an interesting semi-final!
1
Login to Quote

Griffo
8 years
Danny Welbeck being useful?!?! How many times did you have to re-load the save for that to happen?
Login to Quote

Löw: "England will win the tournament." Germany boss Joachim Löw has told the media that 'England will win the tournament' after Hodgson's side knocked out the Germans in the quarter final.

After Germany were defeated in the quarter finals by rivals England, manager Joachim Löw held a post-match press conference to speak to the media about his sides elimination from the competition, with the long serving manager answering a whole host of questions from different media outlets.

The 56 year old expressed his disappointment about the result saying that his side were 'unlucky' and 'played better' than what the result shows. One question in particular was the main highlight of the conference, with a reporter from the BBC asking Löw his thoughts of the outcome of the tournament, with the German replying:
"With the teams left in the competition it's always going to be hard to decide who will be the eventual winner, but based on what I've seen I believe that England will win the tournament. They are on a high after their World Cup success and they play attractive and exciting football. They are undoubtedly the team to beat."

"They have some exceptional players, which defeated us and have performed well throughout this competition. They have a great leader that is Roy Hodgson and he has changed that team around. I'm looking forward to seeing how they progress in the last two stages of the competition and I believe that they will win it all."
England will face Ukraine in the semi-final after they shocked the World by beating Portugal 1-0 in the quarter final, with Roman Bezus scoring a 68th minute strike which lead his country into their first European Championship semi-final in their history which will make for an exciting game in a few days time.
Login to Quote