Cheers lads, I can't actually believe that we won the World Cup! Thanks for your kind comments! I will be continuing this story, doing the Euro 2016 tournament!
Login to Quote

Cheers lads, I can't actually believe that we won the World Cup! Thanks for your kind comments! I will be continuing this story, doing the Euro 2016 tournament!


good to hear you'll be continuing with this, loved the cup run and updates!
Login to Quote Roy Hodgson has expressed his delight of his England players after they beat Switzerland 2-0 to win the World Cup since 1966.

England manager Roy Hodgson spoke to the media after winning the World Cup for the first time since 1966 and praised how well his players performed throughout the whole of the tournament and how they performed against Switzerland.

Wayne Rooney inspired England to defeat Switzerland as he scored both the goals and helped England lift the World Cup trophy, which was a shock to every fan as England weren't the favourites to win the World Cup and exceeded expectations through Hodgson's guidance.

Hodgson spoke highly about his England players, the full interview is below:

"I can't believe it, I am still in awe after a wonderful performance from the whole group. I am so proud of all these lads tonight as they performed so well both as individuals and as a team, they should be so happy with their performance and they all deserve this trophy so much."

"Wayne was absolutely outstanding throughout the whole competition, his work-rate and goals really helped us get to this stage and eventually win it, however it was a team performance and everyone worked so well today, they were magnificent."

"I hope the FA want me to carry on with this role, I am enjoying it so much and I'd be delighted if they want to keep me."

World Class: Rooney(above) scored the most goals in the whole competition, 8 in total.

England now look ahead to the Euro's which are going to be held in France in 2016, which could be Steven Gerrard's final international competition.
Login to Quote England manager Roy Hodgson has been knighted behind closed doors for leading England to their first World Cup success since winning the tournament in 1966.

Around 11am this morning, we received news that Roy Hodgson had been knighted by Prince William for helping England win their first World Cup since 1966.
We do not have lots of information about the knighthood but we know that Hodgson is 'delighted' and 'honoured' to be knighted after we spoke to him as he left Buckingham Palace.

Some people believe that Hodgson did not deserve a knighthood but the majority of people agreed with the decision and hope that Hodgson will bring more success to England after his knighthood.

Hodgson's next chance of leading England to another cup run is the Euro's in France which England are being backed as one of the favourites to win the competition after their performance in Brazil.
Login to Quote

Nathaniel
8 years
Excellent Updates and Congratulations on winning the World Cup! Job well done mate, but now I am expecting you to win Euro 2016.
Login to Quote

Josh_MU
8 years
@Nathaniel Thanks man! It was a great victory for the whole team. The Euro's will be tough!
@LFC Sir Woy says "Lets Bwing on the Euwos!". Thanks for the comment! Chelsea's Frank Lampard has announced that he is ending his 15 year international career and wants to focus his final years on Chelsea.

After England's World Cup success, Frank Lampard has decided to call it quits on his England career after 15 fantastic years playing for his country.
Lampard decided that it was the right decision and he wouldn't be able to keep his fitness levels up both for his club and country and that is why he has called time on his England career.

Frank has over 100 caps for England and has scored 29 goals, he is one of England's greatest midfielders and many fans across the country are sad to see him go but understand his circumstances and back him 100%.

Let us look about at Frank's amazing 15 year career playing for his country:

Frank Lampard earnt his first ever cap for England in 1999 staring in a 2-1 win over Belgium in a friendly match, although he did not score on his debut, he made a huge impression to the England staff and fans and look set to earn even more caps. 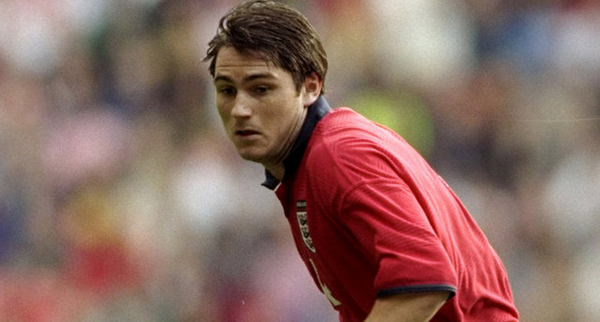 Frank Lampard playing in his first ever England match against Belgium in a friendly, which England won 2-1.

Frank was left out of the England squad for the Euro 2000's which gave him a chance to prepare for the possibility of staring in the 2002 World Cup, which he was left out of again as he was classed as 'inexperienced at international level'.

Frank, however, got his chance in an international competition playing the Euro 2004's. He netted three goals against France and Croatia in the group stage and scored an extra time equaliser against Portugal in the quarter finals to take the tie to penalties, which England lost, however he was name in the 'Team of the Tournament' by UEFA.

Frank became an England regular as a replacement for the now retired Paul Scholes, and was voted the 2004/05 England fans player of the year, after impressing in friendly matches before the 2006 World Cup.

Frank went to the 2006 World Cup but although he played every game, he failed to score and England were eventually by Portugal on penalties, in which Frank missed a penalty alongside with Steven Gerrard and Jamie Carragher. Frank couldn't hold in his emotions after England went crashing out of the World Cup on penalties against Portugal.

Frank played in the 2010 World Cup in Germany, and helped England reach the round of 16, in which they would be facing the hosts Germany, who looked favourites for the tournament. England were down 2-1 when Lampard struck the ball and hit the bottom of the crossbar and appeared to go in, the England players and fans protested and the goal wasn't given which sent England out of the World Cup yet again. Frank Lampard's shot clearly went over the line against Germany but Manuel Neuer admitted he 'fooled' the referee to have the goal disallowed.

Frank was also a key player in Euro 2012, as he captained England, in which he netted two goals for his side against Wales and Switzerland, however he pulled out of the tournament with a thigh injury which left his considering whether to retire or not.

Frank also played in the World Cup 2014 qualifiers and again scored two goals but failed to make the 23 man squad to Brazil which he thought was the right decision as he wasn't fit enough and therefore has now ended his amazing England career.
Login to Quote

Slid3Tackle
8 years
An amazing player...it won't be easy to find a replacement as good as him!
Login to Quote

Jack
8 years
Was a brilliant servant for England, you'll miss him but you'll find someone like him in the future