gggfunk
7 years
Great story man, and some very nice results. You made me want to start a game with The Reds too, it would be nice to bring them back to the Champions League!
Login to Quote

Thanks mate! That means a lot

Hopefully you'll continue to read, and do well with your Liverpool save!
Login to Quote

Denzy
7 years
Not too bad in the League, Good luck against Madrid!

Liverpool met Everton today in a clash which was key to both sides. Everton are 11 points from a European Qualification spot, while Liverpool are 3 from a Champions League qualifying spot. Both teams had a point to prove, and the fans were noisy. The stage at Anfield was set.


Liverpool came out fighting, and Daniel Sturridge was caught offisde after 9 minutes, following a beautiful through-ball from Jordan Rossiter from the centre-circle. Everton looked rattled, and the Liverpool fans cranked the volume up a notch.

Liverpool went close after 21 minutes, a string of passes which started with Victor Valdes in the Reds' goal cut through the heart of the Everton midfield and defence, but Sturridge put the ball straight into the hands of Tim Howard

Sturridge redeemed himself almost immediately, collecting a pass from Martin Kelly inside the Everton area, he looked up, and cut the ball back for the lurking Luis Suarez, who made no mistake, powering the ball into the far corner of the Everton net. 1-0.

Martin Kelly added a 3rd goal after 59 minutes; some excellent passing from Liverpool saw them move to the edge of the Everton box, where Jose Enrique's corner was deflected into the path of Jordan Rossiter, who duly noted Kelly unmarked in the box, and cushioned a header towards him, which Kelly lashed past Tim Howard and into the net.

To their credit, Everton didn't give up, and when Martin Kelly saw red for a second bookable offence after 68 minutes, there were some murmurs of discontent around Anfield. Daniel Sturridge made way for Steven Gerrard, who may see more of the Right-Back position in coming games, with Kelly now suspended, and Glen Johnson injured, and Everton prepared for the free-kick. Leighton Baines stepped up, and fired the ball hard and high past Victor Valdes, to bring some respectability to the scoreline...3-1.

Kevin Volland put the game beyond all doubt when he scored an incredible individual goal. Recieving the ball from Suarez on the half-way line, he broke through the Everton defence with some incredible dribbling, before lifting the ball over the onrushing Tim Howard, to put Liverpool 4-1 up 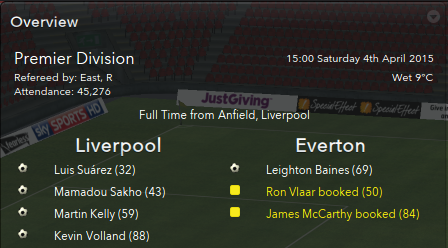 April was a mixed month for Liverpool, with some tough results in the league, but some simply stunning performances in Europe. After the 4-1 Victory against Everton, they travelled to Madrid to face Spanish giants Real in the Champions League.

The game started well for Liverpool, with Daniel Sturridge's 10th minute strike putting them 1-0. However, 3 goals with no reply meant that Real ran out 3-1 winners, and Liverpool had a mountain to climb at Anfield.

Crystal Palace should have been cannon fodder for Liverpool, but only a 64th minute strike from Sturridge could save their blushes in a 1-1 draw, much to the displeasure of the fans, manager and board. Hamann's position started to look precarious.

If ever there was a time to respond to the growing pressure, a home game against Real Madrid would be it. And the Reds' did, getting stuck in to save themselves and their manager. a first-half strike from Coutinho set the scene, and word has it that the half-time speech delivered by Hamann would have put many, many people to shame. It certainly fired his team up, with Kevin Volland adding a second goal 2 minutes after the re-start, and a Daniel Agger double sealing a memorable 4-0 victory.

However, the plague of draws which have become something of a hallmark of Hamann's side haunted them yet again against West Ham, with 2 goals from Suarez rescuing a 2-2 draw, and putting even more pressure on the side.

Against Juventus away from home, nobody expected a result, and certainly, when Juventus went 2-0 up, fans were despairing. Daniel Sturridge's 55th minute strike gave them hope though, as Liverpool return to Anfield with an away goal, and a smaller deficit than they had against Madrid. 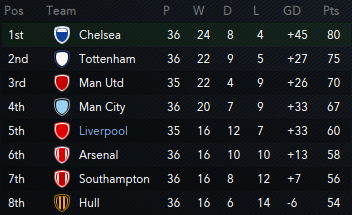 Seasons End is Underwhelming for Liverpool

May started will for Liverpool with a 3-0 victory at home to Stoke, courtesy of a Daniel Sturridge hat-trick. Fans were overjoyed, as their team moved closer to an automatic Champions League qualification spot.

Attention stayed focused firmly on Anfield, where Juventus came to visit, with Liverpool needing to overturn a 2-1 defeat in order to reach the final. The match was finely balanced in the first half, until Coutinho scored in the 40th minute from close-range, sending the Anfield support into raptures. Their side were within touching distance of the Champions League final for the first time since 2009. Depsite some heavy pressure from Juventus, Liverpool's defence remained strong, and saw out the narrow win to send Liverpool through, to meet Manchester United in the Final.

Before that though, Old Trafford hosted a dress-rehearsal of the final, in which Manchester United ran out 2-0 victors, with goals from Robin van Persie and Arjen Robben. Liverpool couldn't bounce back in the next game, falling to a 1-0 victory away from home to Blackburn in the final league game of the season. 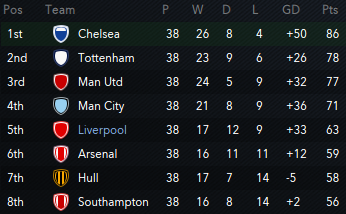 Neal
7 years
Well, to be honest, pretty poor stuff in the league. However, redemption is coming, and against who else but Manchester United!

gggfunk
7 years
Too bad you have finished 5th in the league, but you still have a chance to play in Champions League in the next season! Good luck with that! I've got a question, how much money did you have to spend on players after the first season?:)
Login to Quote

http://i.dailymail.co.uk/i/pix/2012/09/21/article-2206788-15209B3A000005DC-983_634x393.jpg
Liverpoo met Manchester United this evening at Olympiastadion, hoping to leave with their 6th European title. Prior to Kick-off, there was some debate over the teams which the sides would field, but it was speculation only, with both teams fielding top-strength sides in their bid to win the trophy.

Liverpool kicked off, and almost immediately, Kevin Volland was through on goal, latching onto a lofted pass from Jordan Rossiter, but he fired the ball straight into the grateful arms of David De Gea.
Only 7 minutes in, and Liverpool had a golden chance to make it 1-0, with Jordan Henderson picking the ball up on the halfway line, before playing it wide to Coutinho, who went past Phil Jones with ease, before returning the ball to Henderson, who moved it forward to Volland on the edge of the United area, who duly threaded a ball through for the onrushing Suarez, but De Gea was quick off his line to bat the ball out of play for a corner.
The two sides continued to exchange chances, with Manchester United's best coming from Shinji Kagawa, who picked up the ball 30 yards out, played a quick 1-2 with Van Persie before breaking through the Liverpool backline, only to drag his shot wide of the target.
Luis Suarez had the Liverpool fans in raptures after 40 minutes, when a Coutinho corner was cleared to the edge of the area, from where Suarez fired a shot high and hard into the top corner of the net, much to the dismay of Dante, who immediately accosted the linesman, claiming that there had been a foul in the box; a claim which replays proved was without merit.

Manchester United came out fighting, and Robben had them level 13 minutes after the re-start, tapping home a rebound after Robin Van Persie's long-range shot was palmed away by Victor Valdes.
Liverpool's second goal wasn't far behind that though, when Evans barged Criscito off the ball in the box, and the stadium erupted in appeals for a penalty....GIVEN! Daniel Agger stepped up to the spot, and steadied himself...the whole arena went silent...Aggers run-up was quick, and concise, and the ball nestled in the back of the net, De Gea sprawling in it's wake; 2-1 Liverpool!
Manchester United's equaliser was contenious, Juan Mata breaking through the Liverpool defence in the 99th minute of normal time, and lifting the ball over Victor Valdes...to extra time it went!

Extra Time was uneventful, with both sets of players cancelling each other out in the middle of the park, and the game continued to penalties...

5 Penalties scored each...it all came down to Sudden Death. With Daniel Agger having limped off in the first half of extra time, Liverpool's usual penalty takers had all had their chance, and the remaining players looked shaken...terrified to be asked.
Simon Kjaer stepped up for Manchester United...his run stuttering, his body tense.....SAVED! Victor Valdes was a Liverpool hero!
The Liverpool players looked at each other in terror...who would take the deciding penalty?!

Step Forward, Jordan Rossiter! As one, the stadium held it's breath; the 18 year old Liverpudlian was on European football's biggest stage...having only made 18 appearances all season, and without a goal to his name, he stepped up to the penalty spot to take the kick which could hand Liverpool the Champions League trophy for the 6th time in the club's history.

Staring into the eyes of David De Gea, Rossiter took 3 steps back, and steadied himself, eyes darting from corner to corner. He ran up, shaping himself to go left, and as De Gea flung himself down to meet the ball, Rossiter stopped, and stroked his penalty straight down the middle.
IN! LIVERPOOL ARE EUROPEAN CHAMPIONS FOR THE SIXTH TIME!!!!!!
Login to Quote