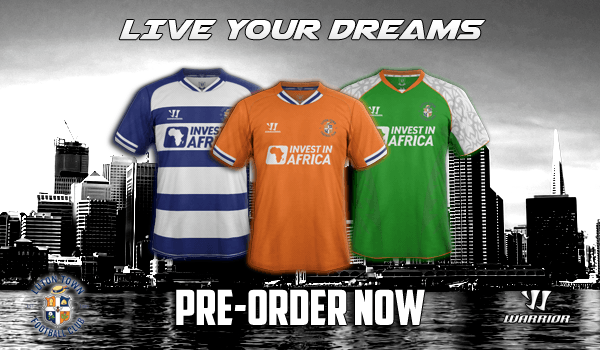 It is that time of the year again! Luton Town have released their new set of kits for the season 2016/2017, and their slogan for this year is "Live Your Dreams". This campaign follows on from last year's "Chasing The Dream" campaign, which was very successful. Adidas' deal with Luton Town was terminated as Warrior Sports offered a significantly better kit deal. Invest In Africa still embroiders the torso of the kit, and the players are in love with their new kits.

The home kit personifies the traditional values of Luton Town. The traditional orange is on show once more, with a white and blue collar and white and blue hoops circling the cuffs partly. The texture of the kit is made of a new fabric discovered last year in Braxil which is called Wagtrex. It is designed to fit the players comfortably, have great stretching capabilities while still being able to hold it's shape, and helps aerate the players through out the full ninety minutes. This is the kit which will be showcased at Kenilworth Road this season.

The away kit is made of blue and white hoops. It is made of the same fabric as the home kit and the colours illuminate in light, in order to strike fear in to opponents. Luton Town will wear this rich kit on their travels this season.

The third kit is quite interesting, to say the least. In order to congratulate manager Ryan Ferguson for being names as the new Republic of Ireland manager, this kit has been designed to reflect the three colours of Ireland's flag; green, white and orange. The kit has a green torso, with an orange collar and white sleeves. An intricate design has been placed on the sleeves, which brings a Celtic feel to the kits. A stunning kit to celebrate a stunning manager's fortunes!

All three kits are available in Luton Town FC's official store located at Kenilworth Road, Luton Town. The price for an adult kit is £25, while kids only pay £15 for their's. Buy your kit today!

So you have seen the kits, but which one is your favourite? Comment below!

Aaron
8 years
Those kits are epic!
1
Login to Quote

Specialist in success
8 years
Nice kits, only, your new away kit looks like QPR and Reading's! Not nice to steal kits, is it now? Ha.
1
Login to Quote

table22
8 years
where do you get the template??
1
Login to Quote

Jer
8 years
SMEXYYYYYY.. You should send this link to Luton's mail or sumetin
1
Login to Quote

Lynchy
8 years
good luck with Ireland and do my country proud!!

Justice
8 years
Everyone, I'm not going to reply to ten comments individually so thanks to everybody

Specialist in success, actually the away kit is the Shamrock Rovers home kit template with blue instead of green....
1
Login to Quote

I Am The Special One 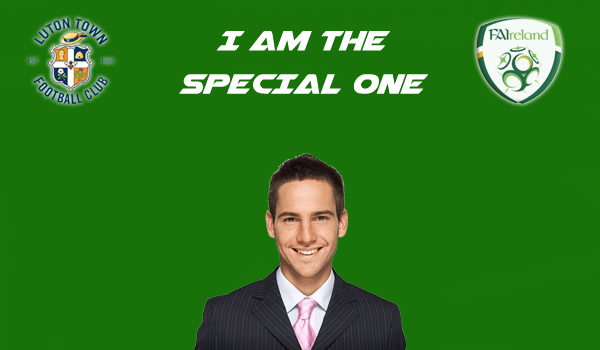 Reporter: "Well, Ryan. You stand before us as the new manager of the Republic of Ireland. How do you feel right now?"

Ryan Ferguson: "I did not know that my feelings were of concern to the media. When did press-conferences become therapy group meetings? If you want to know how I feel right now, I will tell you. I quite like how you have the top two buttons on your blouse undone, it gives me a nice view of your rather large breasts. This has made me feel quite lustful right now and I am frantically trying to conceal a very large surprise guest. Do you have any serious questions for me to answer?"

Reporter: "Ireland targeted you as their number one choice and clearly felt you were the outstanding candidate for the job. What do you bring to the table?"

Ryan Ferguson: "I'm sorry if I appear a little arrogant but I believe I am a chosen one, an elite manager, and I will bring success. I think you only have to look at what I have achieved over the last three seasons to discover my true ability as a manager. I am a top manager and I have made Luton Town a top club. I won three league titles in a row, along with promotion each time. How many other managers could do that? Not even José Mourinho could do so."

Reporter: "You mentioned José Mourinho, how do you compare yourself to him?"

Ryan Ferguson: "I think that José is a very honest man. In his first press-conference after he signed for Chelsea for the first time many, many years ago, he described himself as 'a special one'. I think he is correct, he is a special person, very special. You couldn't find more rubbish in a landfill than in his head. What does he think at times? He is a crazed child in an adult's body. I, however, am The Special One. Everything I do succeeds. Look at my achievements over the past few years, nobody matches my ability. I am the best, I am The Special One."

Reporter: "Where do you see yourself in ten years?"

Ryan Ferguson: "I don't know, do I look like a psychic to you? Only time will tell the future, nothing else. Until then, I will continue to succeed and continue to win. Now, if you will excuse me, I must find a courtesan who can provide my wishes." 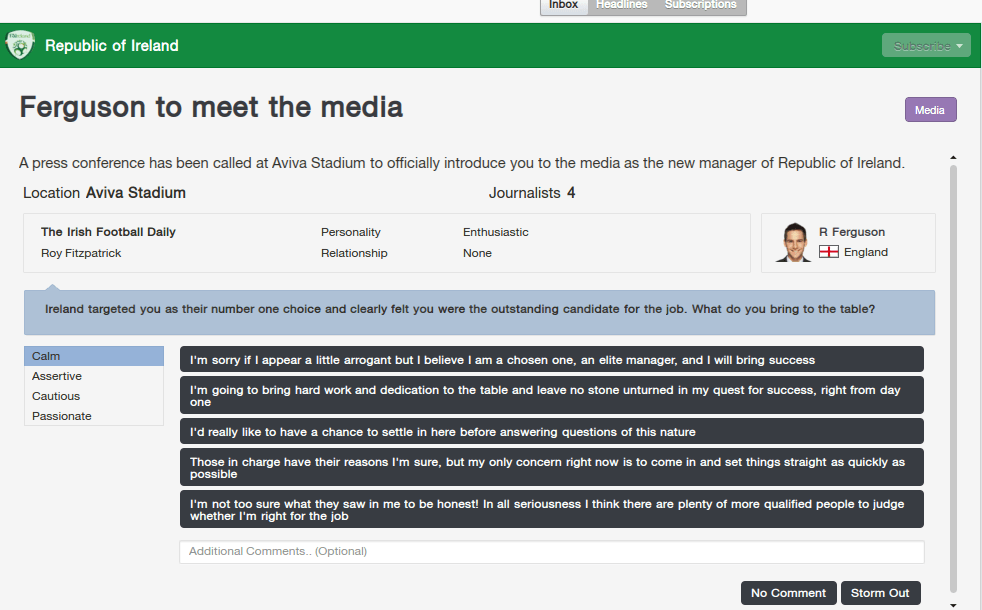 Aaron
8 years
Hahahaha, that first reply to the question she gave you...LOL!
Login to Quote