Barnet_Boyz
6 years
great progress so far. Loving u being back writing XD
1
Login to Quote

Aaron
6 years
Urh...Aguero centre mid? Well if you say so

Josh_MU
6 years
Great update, though I wanted Ronaldo to win

Justice
6 years
Barnet_Boyz, AlexTHFC, AaronHJFT96 & Josh_MU, thanks guys and yes there were a few disappointments in the awards!

Back To The Training Ground 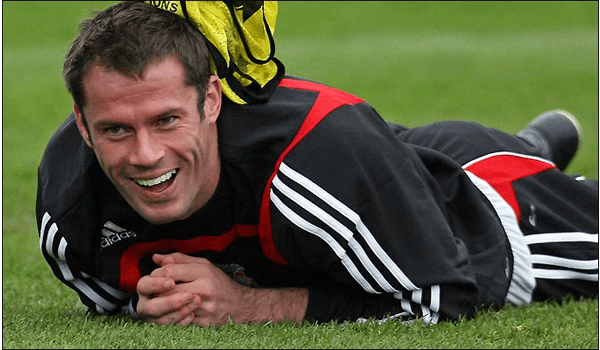 Former Liverpool and England player Jamie Carragher has left his role as a pundit at Sky Sports by mutual termination of his contract and has signed for Skrill Premier league-leaders Luton Town as a coach. The Bootle-bred football fanatic described in an interview about his desire to return to the world of football, first in non-Football League territory, to learn about what it takes to become one of the best coaches, and indeed managers, in world football.

Jamie Carragher: "Joining Luton Town was the easiest decision I ever had to make. Obviously having a relative of mine as manager (Ryan Ferguson) made things easier for me and for the club to organise a deal, and I have no doubt in my mind that this is the right choice for me. I believe that I can help Luton to progress and Luton can help me to progress.

Things just didn't work out for me at Sky Sports. It was a terrific experience to be on the other side of the television cameras for once, and I learned a lot from Gary (Neville), Jamie (Redknapp), Glenn (Hoddle) and the others. But for me, I can't stay away from the football pitch. I want to be actively involved with football, not just talking about it. Football always has been a big part of my life, from playing in Bootle to battling AC Milan in Istanbul for the greatest trophy in the world wearing the colours I love. I just think that Luton is the right move for me.

I have great ambitions for myself and maybe one day I can even become manager of a great football club. Ryan (Ferguson) understands that and he wants to help me on my way. I'm grateful for the opportunity to work for a club with a great history and hopefully we can create some more history while I'm here."

"What style of coach do you see yourself as?"

JC: "A good one!" *Chuckles* "I'd like to think of myself as a hard-working and open coach. I'm always looking to learn new tricks and tips from the others around me. If I think anything is useful I will try my best to pick it up. I really try to motivate the players to work hard in training and to take care of themselves. If I see a player is putting in the effort I'll be good to him and really help him with his career. But if a player isn't putting the work in, they're best not being anywhere near me because I can give a new definition to the 'hairdryer treatment'.

I think having the likes of Gérard Houllier, Rafa Benítez, Roy Hodgson, Phil Thompson and Brendan Rodgers coaching me before has really helped me get a good understanding about football. For me, Gérard and Brendan were probably the greatest coaches I've ever had, and they really did help me to not only improve my footballing ability, but my understanding of the game as well. I hope that one day, I can become as good a manager as these guys were, because they were, and still are, some of the best coaches on the planet and my inspiration today."

Walter
6 years
Good pickup to have on your staff

Arvind
6 years
You should hire a translator as well.. xD
1
Login to Quote

Justice
6 years
Walter, yeah he definitely is a great coach to have

Arvind, who to hire? Gary Neville?


After finishing the year 2013 on top of the Skrill Premier by a comfortable five points, we were looking to use our squad strength to full advantage and claim at least twenty-two points over January and February, and progress in the FA Trophy! You might have thought it was an unrealistic target but let's see how we faired over the two months.

Could there have been any better way to start 2014 than by demolishing Barnet 4-1 at home? This result sent out a strong message to the other teams in our league, and we won three and drew one of our next four fixtures, including a win against Kidderminster in the FA Trophy. Drawing the next two games in a row might have been seen as a confidence-hitting slip, but we recovered in time to defeat Hyde in the FA Trophy in our opening game of February. February saw us play a triple-header against Hereford in the one week; two FA Trophy semi-final legs and a league game in the middle. We drew the first cup leg away from home, before beating them twice at home to claim three league points and a place in the final of the FA Trophy! A demolition job at Nuneaton was good enough to see out the month in style. We had played fourteen games over the course of these two months, and we won nine times and drew five times. I'm delighted that we remained unbeaten, showing the great character that we have in the squad. I'm hoping for more of the same over the next two months to see out the season in style. 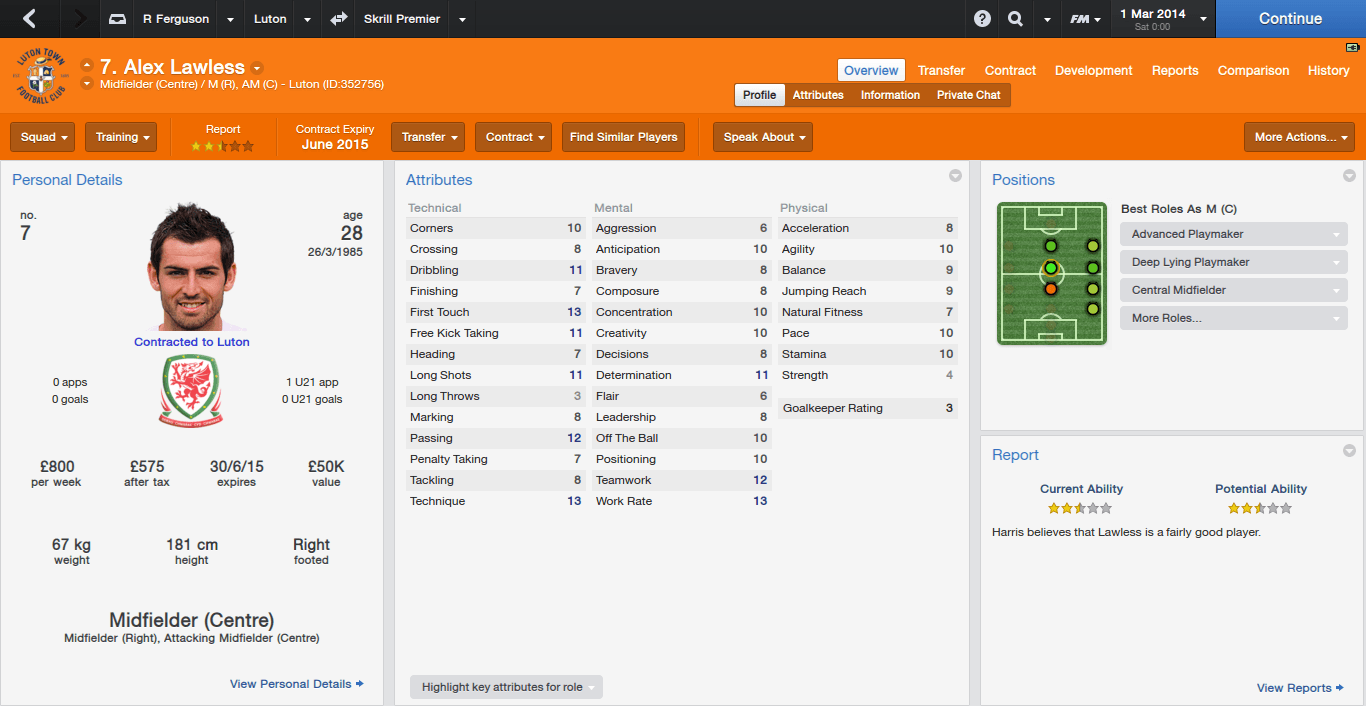 It was difficult for me to pick a stand-out player, but I had to give it to our Welsh Wizard, Alex Lawless, who has been outstanding all season, especially over the last two months. He has been playing on the right wing, and has created several goals and has scored a few crackers himself. He has been Mister Consistent, and I am hoping for him to continue his form throughout the rest of this season. 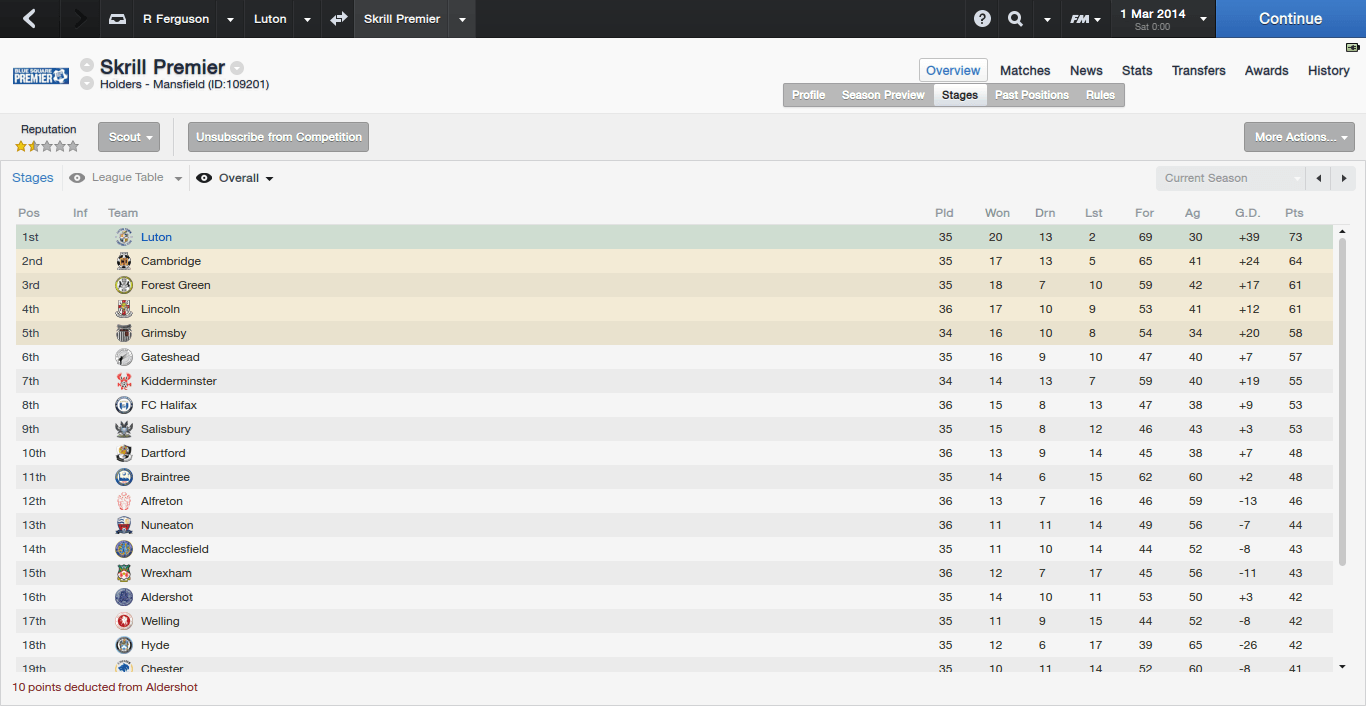 Our outstanding form over the past two months saw us pick up exactly 22 points, which was what I had targeted. I am pleased that we hit that points target, as it has now put us a staggering nine points clear of Cambridge at the top of the league with just eleven games left to be played. We have lost just two games this season in the league, which is absolutely incredible, and our goal difference of +39 is remarkable. Provided we do not slip up massively, the league is all but ours. Hopefully we can keep our heads and claim the league title before the season is done.

We play seven games next month, including the FA Trophy final against Braintree at Wembley. I want to win this trophy, as it would be great to have a piece of silverware so early on in my management career. From the six league games, I want to earn at least 10 points. If we can manage that, I am pleased with the month of March.


The months of March and April will have their own separate updates, due to the enormity of each game remaining. I will also give the FA Trophy final it's own update, as it will be my first cup final as manager of Luton Town and one that I am really looking forward to. Hopefully by the end of next month, we will have one trophy in the bag and another all but won. I hope that you are all enjoying this story, it is a growing pleasure for me to write

Previous Post: Back To The Training Ground
Next Post: Wembley Is Always The Dream
Login to Quote

Josh_MU
6 years
Awesome update man, really enjoying this story. What a good two months you've had, undefeated and 9 points clear at the top, could it get any better than that?
1
Login to Quote

Josh_MU, well, we could be over forty points ahead, had we won all our games!

Jer
6 years
*gets back in*
Login to Quote