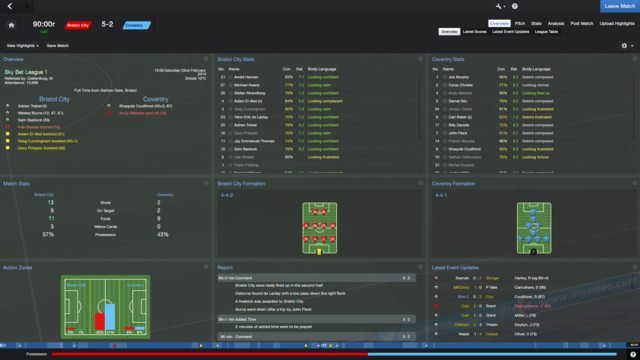 Manager's review
Booy made two changes to the side that got knocked out of the FA Cup as Cunningham replaced the suspended Catala and Trebel (returning from suspension) replaced Williams with Strandberg moving from MC to DC. The Robins wanted to avenge the defeat against Coventry in the Johnstone's Paint Trophy earlier in the season and they definitely did that!!!! Ivan Bolado got injured after 10 minutes and this meant Wes Burns got his chance to impress and boy didn't he. The Welsh youngster got his first senior hat-trick and picked up the MOTM award. Burns was quick to thank his strike partner Baldock who also scored and assisted all three of Burn's goals. City's task was made easier by the fact a tired Coventry side were down to 10 men early on but this does not take the gloss off a fantastic performance.
Login to Quote

The loan signing who joined in January has settled in quickly to the side and has started all 11 matches since his arrival. In February he contributed 3 assists and was named MOTM twice. In fact he was very consistent, never picking up a match rating of less than 7.0. His contract with Vitesse is expiring in the summer and Booy will surely be keen to sign-up his services for next season.

Highly commended
Jay Emmanuel-Thomas - average rating 7.24
The left-winger had a strong month with the highlight being his MOTM performance against Swindon where he was asked to play up-front and scored 2 goals. No assists this month but is still joint top assister with 11 this term.
Sam Baldock - average rating 7.18
City' top scorer was injured for the 1st match of the month but then came back guns blazing with 3 goals in the other 4 matches, not to mention his 3 assists for Wes Burns in the demolition of Coventry. The City vice-captain now has 28 goals and 11 assists this campaign and has overtaken strike partner Bolado as the Robins top performer this campaign (average rating 7.13) 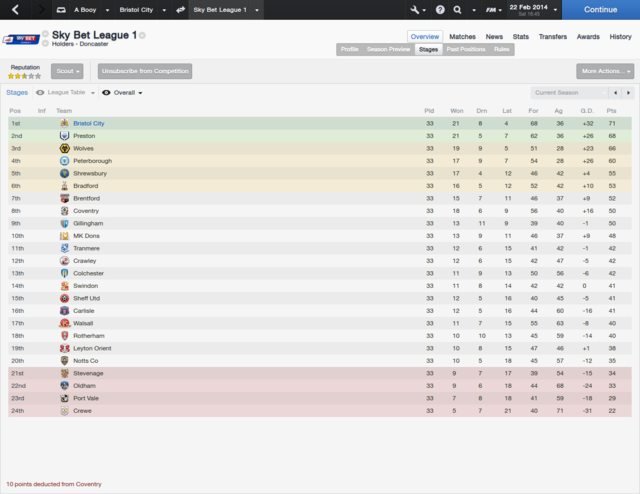 With two months left of the League One campaign it is clear now that it is a three horse race between Bristol City, Preston and Wolves for the two automatic promotion places. In fact City's two closest rivals closed the gap on the Robins this month but lets hope that Booy and his squad can hold on to top spot as they have for the whole campaign!!!
Login to Quote

Jer
8 years
Comfortable up top! Keep it up 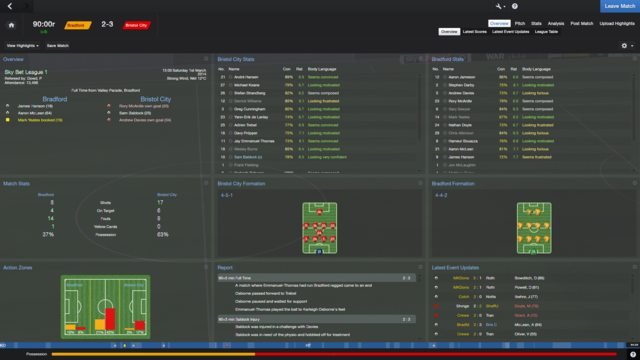 Manager's review
There were two changes to the starting 11 as MOTM against Coventry Burns came in for injured Bolado and Williams for suspended El-Abd. City went one down to a Bradford side that beat them at Ashton Gate earlier in the campaign (the only side to do this in the league this season). The Robins then scored three goals in quick succession, all assisted by Jay Emmanuel-Thomas. It was Baldock and Emmanuel-Thomas who stole the show for City with match ratings of 8.3 and 8.1 respectively. It was a good day for Andrew Booy as rivals Preston and Wolves both drew 0-0 at home to sides in the bottom half of the table meaning City strengthened their lead at the top of the table.
Login to Quote 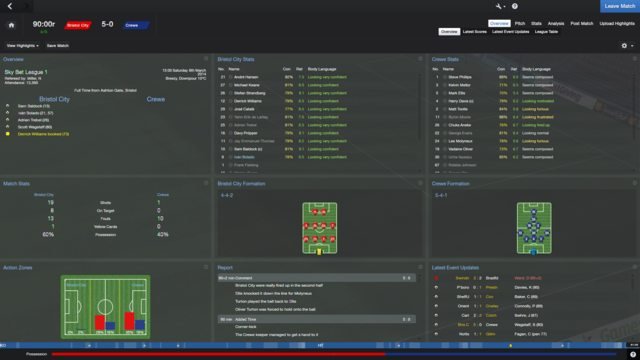 Manager's review
It was top against bottom in this League One clash and this was reflected in the scoreline. Booy named his strongest possible 11 with only El-Abd missing through suspension so Williams continued in defence. City put in their best performance of the season and to be honest could of won by more than the 5 goals that they did. Overall a good time to get their most emphatic win of the season with the visit of 3rd place Wolves to Ashton Gate in three days time.
Login to Quote 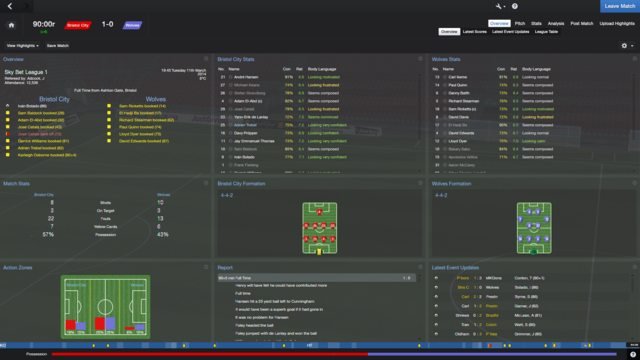 Manager's review
Andrew Booy had the luxury of naming his strongest possible 11 for this top of the table 6 pointer, this meant El-Abd returned from suspension at the expense of Derrick Williams. Both teams were nervous in this cagey affair and it was a very competitive match which saw the two sides share 13 yellow cards. This lead to City's left back Jose Catala picking up his 2nd card in the 72nd minute. Booy would then of been more than happy to settle for a 0-0 draw so he and the Ashton Gate faithful were truly delighted when Ivan Bolado grabbed the winner from a Emmanuel-Thomas left wing cross in the 86th minute. City are now 10 points clear of Wolves in 3rd place with 10 matches remaining....... what a result!!!!
Login to Quote 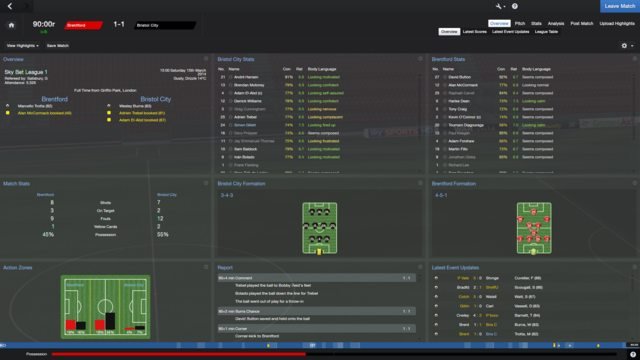 Manager's review
Booy made four changes to the starting 11 that beat Wolves, Moloney came in for the injured Keane, Cunningham for the suspended Catala, Williams for the injured Strandberg and Gillett for the tired De Lanlay. The match was an even affair until the last 10 mins when the drama really unfolded. Brentford broke the deadlock on 82 mins then Andrew Booy made an immediate substitution to move to a 3-4-3 formation playing Baldock, Bolado and Burns in a front three. It was substitute Burns who made an immediate impact and got the equaliser with his 1st touch after an assist from MOTM Gillett. After Preston lost and Wolves won City are now 8 points clear of both with 9 matches remaining.
Login to Quote

Bristol City have signed two 16 year olds with bags of potential on free transfers. Goalkeeper Gerry Taylor has a potential rating of

and could easily become a leading GK in the game. Austin Ansell can play on either the right midfield or as a striker and has a potential rating of

. Both have signed contracts until 2017 and will have game-time in the U21/U18 squads until they are ready for first-team action. 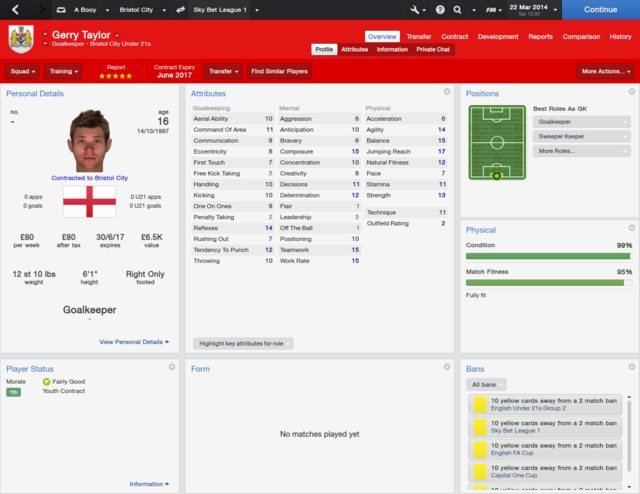 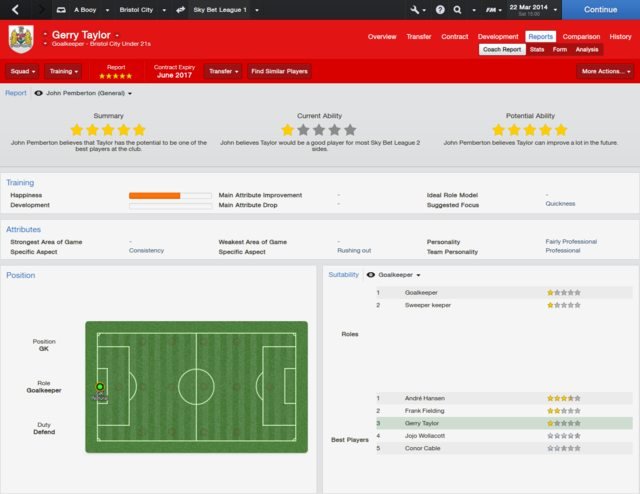 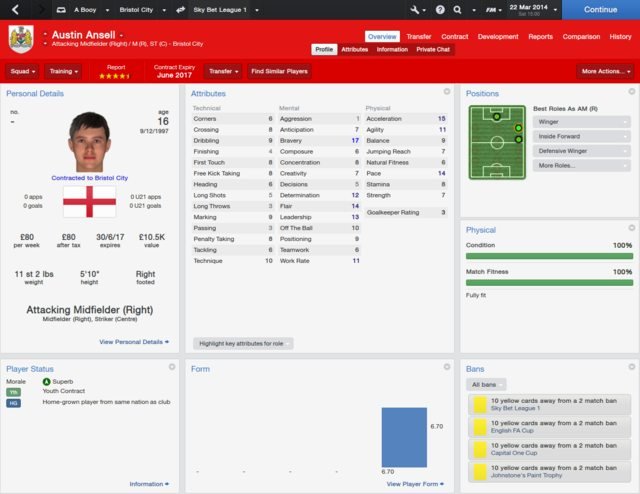 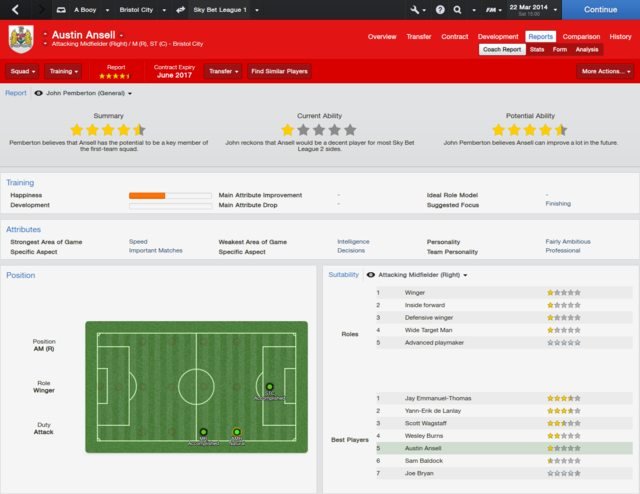 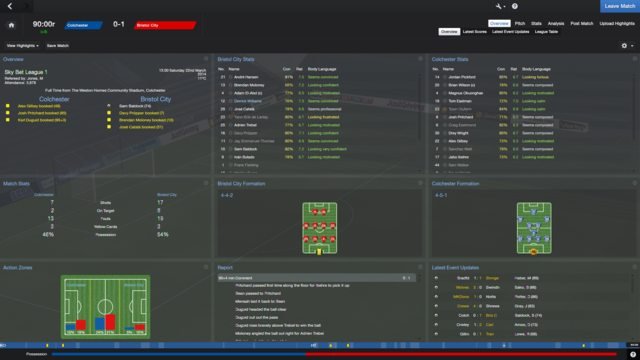 Manager's review
Booy made two changes to the side that drew in London against Brentford. De Lanlay and Catala were back from tiredness and suspension so replaced Gillett and Cunningham. City were on top for the entire match and perhaps should have made the scoreline more comfortable before Baldock's winner with 15 minutes remaining. Overall a pleasing away win and now only 8 matches left of the season to secure promotion and the League One title.
Login to Quote 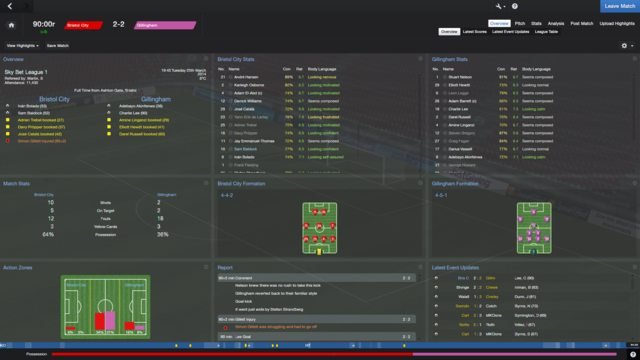 Manager's review
Booy made one change to the starting 11 as Osborne returned from a two match suspension to replace Moloney. As the Robins have done in most League One fixtures this season they dominated the match and should have easily won had it not been for a Gillingham equaliser in the 90th min (Gillingham only had two shots in the entire match and scored with both). The City strike force of Bolado and Baldock were both on target again and now have an incredible 24 and 32 goals each this season. Both Preston and Wolves lost meaning that City are now 9 points clear at the top of the table.
Login to Quote 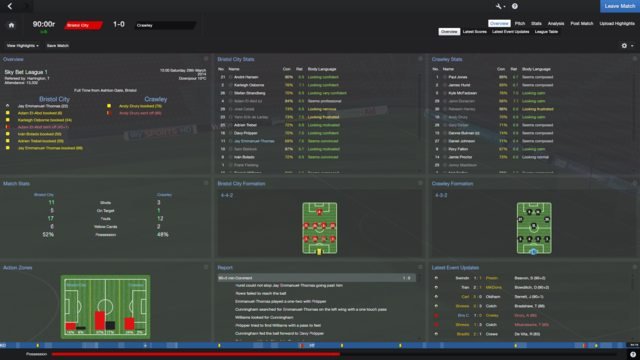 Manager's review
Bristol City made one change to the starting 11 as Strandberg returned from a thigh strain to replace Williams. City started well and went a goal up thanks to MOTM Emmanuel-Thomas's 8th goal of the season. The momentum changed however when City captain Adam El-Abd was sent off for an amazing 4th time this season more than anybody else in the division. Booy then sacrificed Sam Baldock to play a 4-4-1 formation for the 2nd half in which Crawley rarely threatened and the Robins held on to win 1-0 and extend their lead at the top as Preston drew and Wolves were losing the Johnstone's Paint Trophy final.
Login to Quote

The Bristol City vice captain has again been in good form this March and was deservedly awarded the League 1 player of the month award, the 3rd time he has won the award this season. He has scored 4 goals in the 7 matches this month and continues to be top of the League 1 scoring charts with 27 goals this season. His closest rival Kevin Davies of Preston has 24 goals and the City vice-captain is keen to stave off the veteran and win the League One golden boot.

Highly commended
Yann-Erik de Lanlay - average rating 7.04
The Norwegian right winger has been consistent for City this month providing three assists for his teammates. He perhaps could improve his goalscoring ratio having only contributed 8 goals this season but his ability to beat an opposition left-back has been fantastic all campaign and he has been one of Booy's most successful signings.

Jay Emmanuel-Thomas - average rating 7.02
The City left winger has contributed 5 assists and one goal this month and is joint 2nd in the League One top assister chart with 13 in total this campaign. Like his right wing colleague De Lanlay he has been working hard on the training ground to perfect the position of playing in a 4-4-2 formation on the wing and now both can play on the left and right of midfield naturally. 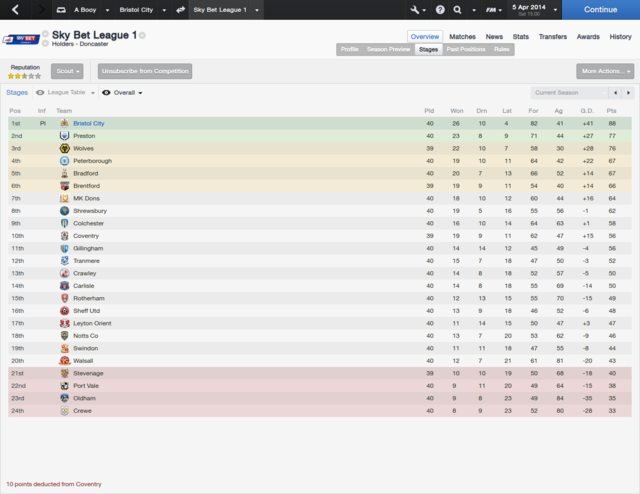 Bristol City had a strong March and manager Andrew Booy won the League One manager of the month award for the 2nd time this season. His team have now secured a playoff place at the very least but surely it is just a matter of time before they secure the promotion their performances have deserved.
Login to Quote 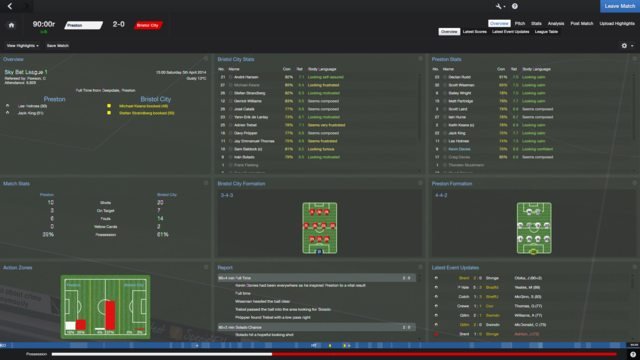 Manager's review
Andrew Booy was able to name the the strongest side possible after loanee Michael Keane's return from injury. El Abd served the 1st of a 4 match suspension and Derrick Williams came in for the City skipper. It was a frustrating top of the table clash for Bristol City as they dominated proceedings and had double the amount of shots of Preston (20) but for the 1st time in the league this season they failed to find the back of the net. In good news for City and in particular top scorer Baldock MOTM Kevin Davies got two assists and then picked up an injury which means he will miss the next three weeks. City now need 8 points from the remaining 5 fixtures to clinch the League One title.
Login to Quote 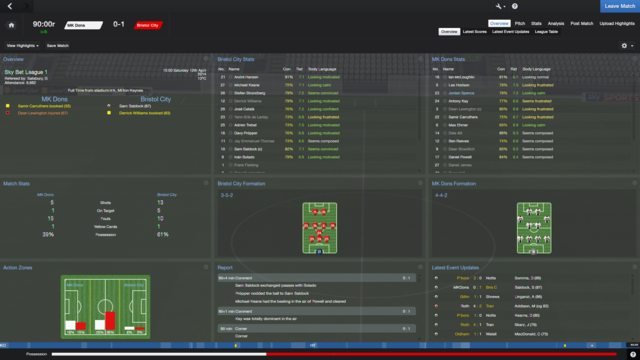 Manager's review
Andrew Booy stuck with the side that were unlucky to lose against Preston last week and made no changes. City patiently probed at MK Dons but had to wait until the 87th minute to get the winner. It was Sam Baldock who scored on his return to his former club and it was commendable that the City striker finally got his goal after missing a number of easy chances during the match. City now go into the match at Ashton Gate at Rotherham next week knowing that 3 points will be enough to secure the League One title and promotion.
Login to Quote 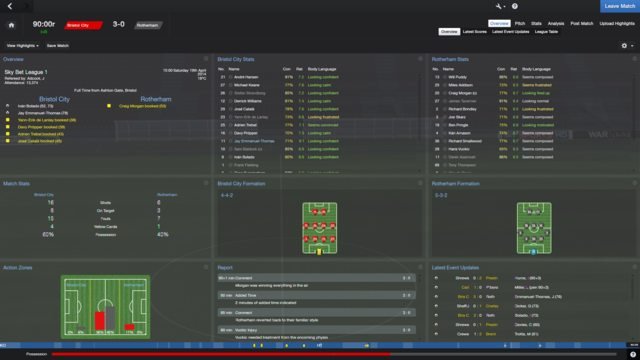 Manager's review
An unchanged City side game into this game in front of their home fans knowing victory would secure the League One title and promotion. A nervous City scored all three goals in the 2nd half and the Robins fans were ecstatic. 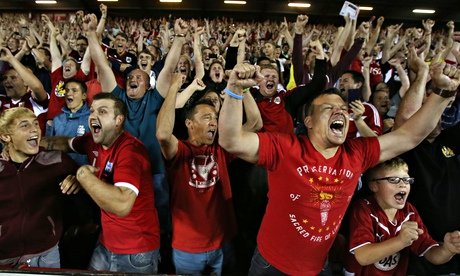