Bristol City had 5 pre-season matches to work on their shape, fitness levels and bed in new signings. The three home games were scheduled against foreign teams from the top divisions in France and Portugal. The two away friendlies were against lower league English sides. Overall it was an inspiring pre-season goals galore and a 100% record which shows promise for the upcoming Championship campaign.

The results are below: 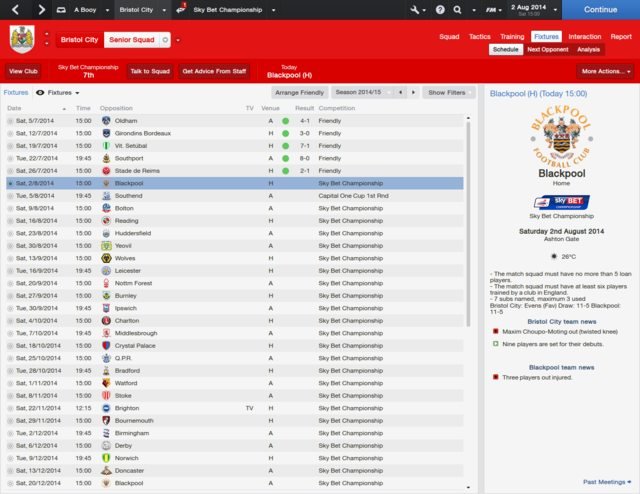 4-1
7 new signings in the starting 11. Booy continued with the 4-4-2 attacking formation that worked so well last season. Oldham scored 1st but then goals from Wilson, Rossi, Vydra and El-Abd (from the bench) saw City comprehensively beat League 2 Oldham.

3-0
Two changes as Williams came in for injured Denswil and new signing Buitrago replaced departed Bolado. Great result and performance against a Bordeaux side that finished 6th in Ligue 1 last season. MOTM Buitrago scored twice with a match rating of 8.80......not a bad start!

7-1
A fantastic win against a Setubal side that play in the Portuguese Premier Division. Denswil was back from injury to replace Williams and Choupo-Moting was back from the World Cup with Cameroon to replace Vydra. All 11 starting players played with a rating of 8.0 or over with goals from Wilson, De Lanlay, Choupo-Moting, Buitrago, Ince and Vydra (2 from bench).

8-0
Same team that demolished Vit. Setubal 3 days earlier and same result! Southport, who play in the Skrill North were no match for a strong City side. Goals from Strandberg, Denswil (2), Zuculini, Choupo-Moting, Buitrago, and Vydra (2 from bench). Only negative was Choupo-Moting twisted his knee in the first half and will now miss the start of the Championship season.

2-1
New signing Traore came in to build up his match fitness in place of Strandberg and Vydra (who scored 4 goals in two sub appearances) started in place of injured Choupo-Moting. Ligue 1 Stade De Reims put up a strong wall and only in the 92nd minute did an own-goal provide Booy with a 100% win record in pre-season. De Lanlay had scored his 3rd goal of pre-season in the 1st half.
Login to Quote 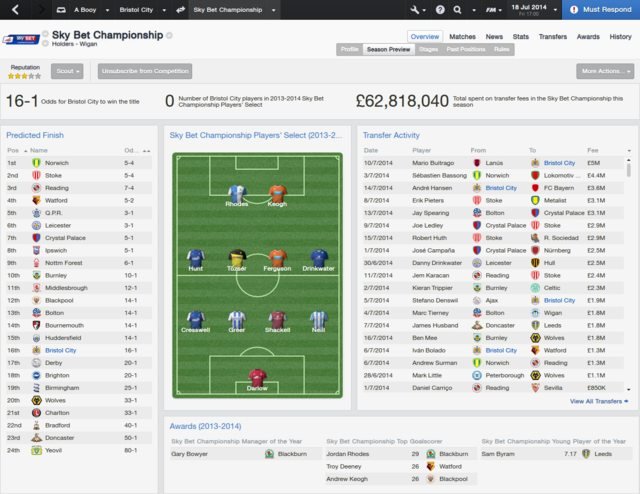 Bristol City have odds of 16/1 to win the Sky Bet Championship this season meaning the bookies predict them to finish around 16th this season based on these odds. Andrew Booy is quietly happy with this 'underdog' title stating, "obviously our primary objective is to stay clear of the relegation zone but if we can manage this who knows where we could be come the end of the season. However with the squad we have assembled I truly believe we can beat anyone at this level on our day".
Login to Quote Manager's review
Andrew Booy only had one injury concern as Choupo-Moting was injured in pre-season so Vydra started in his place. Vydra continued his pre-season form by assisting MOTM Buitrago in only the 2nd minute as the Robins came out firing. City were 2-0 up on the stroke of half time as Tom Ince (playing against his old club) set up Buitrago for his 2nd goal. Booy's team ended up holding on for the final 20 minutes as Blackpool mounted a mini fightback when scoring in the 68th minute. However it was a winning start to life in the Championship and it was Mario Buitrago's day with two goals on his debut and a MOTM 8.80 rated performance.
Login to Quote 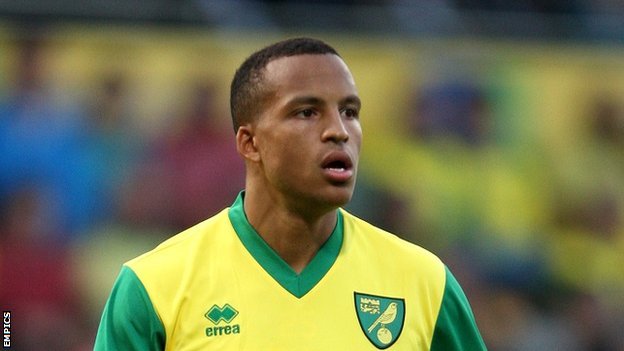 Andrew Booy shows no signs of halting his summer spending at Ashton Gate with the signing of 26 year old Swedish left-back Martin Olsson form Championship rivals Norwich. Olsson joins for an initial 2 million pounds but based on a number of clauses this fee could rise to 3.5 million. Olsson will play on the left hand side of defence as a complete wing-back. Olsson played 29 times for Norwich in the Premiership last season and it is seen as a major coup to steal such a strong player from one of the Championship promotion favourites.
Login to Quote 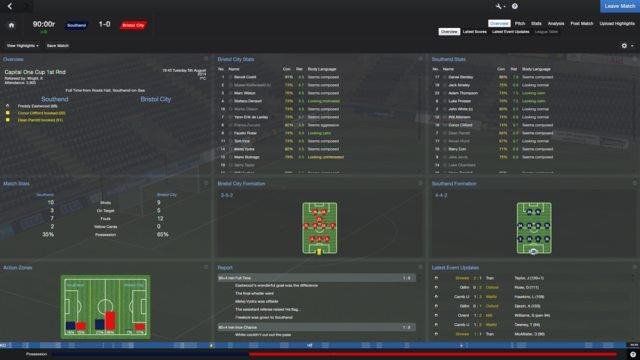 Manager's review
Booy made one change to the side that won on the opening day of the Championship season as Martin Olsson came in for his City debut and Strandberg dropped to the bench. It was a day to forget for the Robins in the Capital One Cup again as for the 2nd season in a row they were knocked out at the 1st hurdle. Booy's side dominated proceedings but City's strike force of Buitrago and Vydra missed countless opportunities before a superb Freddy Eastwood free kick towards the end of the game won it for Southend.
Login to Quote 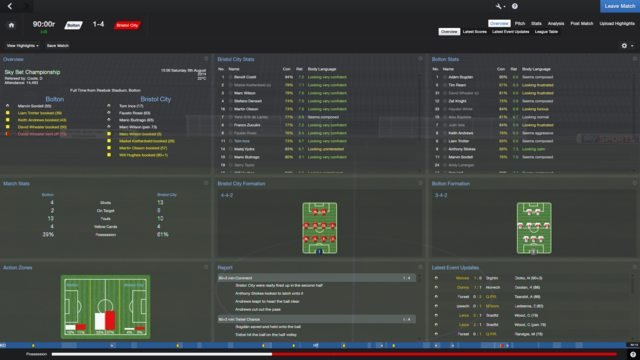 Manager's review
Booy named exactly the same side that lost to Southend in the Capital Cup 1st round in midweek. It was a feisty affair at the Reebok Stadium with a total of 9 yellow cards and a red card for Bolton defender David Wheater. The Bolton dismissal occurred however when City were 3-1 up so it should not deflect from a great away victory. City and Bolton traded blows up until the 60th minute with a goal from MOTM Ince for the Robins. At this point though Booy altered his tactics by bringing on Hughes for De Lanlay, with the change proving instrumental as City then scored three times in 10 minutes after the substitution. Tom Ince's MOTM performance involved a match rating of 8.70 with one goal and two assists.
Login to Quote 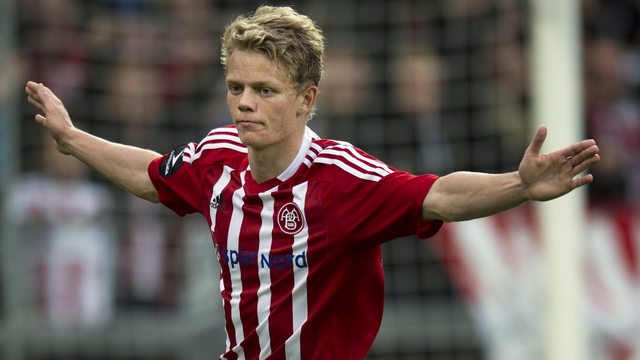 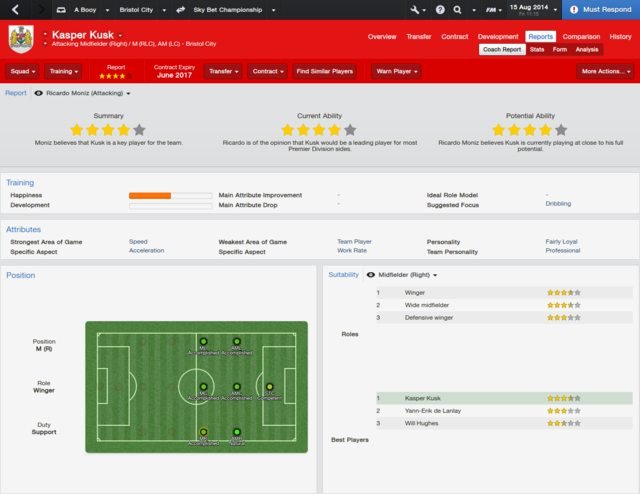 Kasper Kusk is a 22 year old winger who has joined from Danish side AaB for a fee of 525K. Bristol City had to fight of competition from top sides in England, Italy and Spain as the Danish star had a minimum fee release clause in his contract for an offer of 525k from another European club. Kusk has spent his entire career in Denmark playing 72 times for AaB and scoring 11 times. He can play across any position in the midfield but it is thought that Booy sees him as a replacement to De Lanlay on the right-hand wing.
Login to Quote

TonkaWolves115
7 years
Good signing mate - good luck for the rest of the season!!
Login to Quote 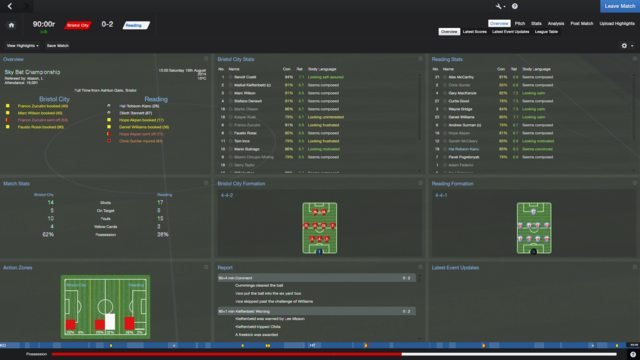 Manager's review
Booy made two changes to the side that won convincingly at Bolton 7 days ago by handing debuts to Kasper Kusk and Choupo-Moting who replaced De Lanlay and Vydra respectively. The changes didn't seem to work however as Reading inflicted a 1st league defeat to the Robins on their return to the Championship. Zuculini's red card for two reckless challenges means he will miss the next league game away to Huddersfield in a weeks time.
Login to Quote 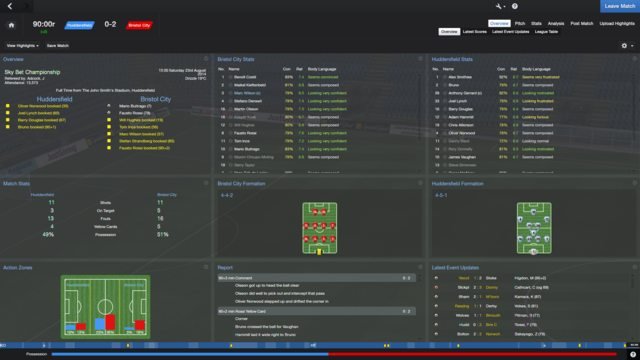 Manager's review
Booy made one change to the team that disappointingly lost to Reading last week as on loan midfielder Will Hughes earned his first start for the club for the suspended Zuculini. In a feisty, even fought game Bristol City came out on top thanks to a well taken early breakaway goal from Buitrago (his 4th goal of the season) and a late close range finish from Rossi. Manager, Andrew Booy owed this victory to a strong defensive display especially from captain Wilson who put in a MOTM 8.50 rated performance at the heart of the back four.
Login to Quote 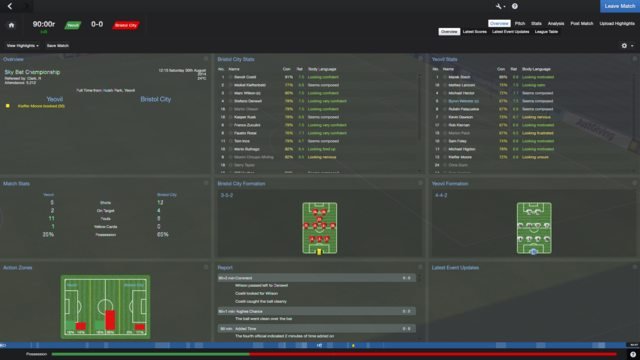 Manager's review
In what proved to be a uneventful West Country derby City were unable to capitalise on 65% possession against a poor Yeovil side. It highlights how far City have come in the last year as Andrew Booy and the Robin's fans were disappointed not to leave Huish Park with all 3 points in a boring game that was live on Sky Sports. Manager Booy made one change to the starting 11 bringing back Zuculini from suspension for Will Hughes in central midfield. Perhaps the main reason that City were unable to bag the victory was because the Robins strikers were largely wasteful in front of goal. Buitrago and Choupo-Moting had match ratings of only 6.40 and 6.50 respectively. The majority of the City squad now have 2 weeks apart as the transfer window closes and international fixtures are played.
Login to Quote

The Italian summer signing has been the lynchpin in the City midfield this month. He has been at the heart of everything good Andrew Booy's team have done and contributed with 2 goals and 1 assist. If Bristol City are to continue their strong start in the league then Fausto Rossi will be instrumental in the centre of the Robin's midfield.

Highly commended
Mario Buitrago - average rating 7.32
The U20 Colombian striker has settled into live at Ashton Gate with ease racking up 4 goals from the 6 games played in August. This form scooped him the League One young player of the month award for August.
Mark Wilson - average rating 7.22
The competitive Wilson has been asked to captain this multi-national young City side and has taken to the task with aplomb. He has lead with composure from the back and as Andrew Booy encourages his defenders he is a ball playing defender with good technical ability. He is the City penalty taker and scored one goal this month from the spot. 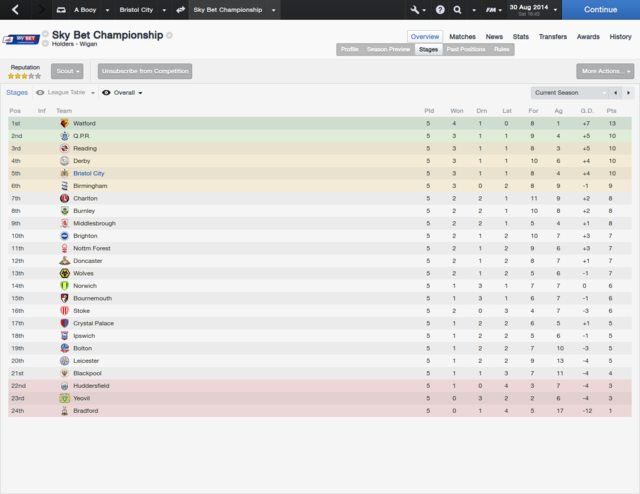 Bristol City were quiet towards the end of the transfer window after doing all of their business earlier in the summer. In fact the only piece of business to completed was the sale of 16 year old academy graduate Dean Jones to West Ham for a fee of 575K which could eventually rise to 1.5 million. 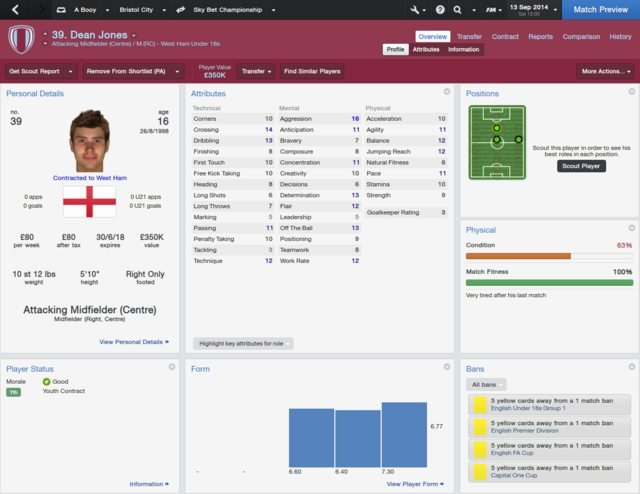 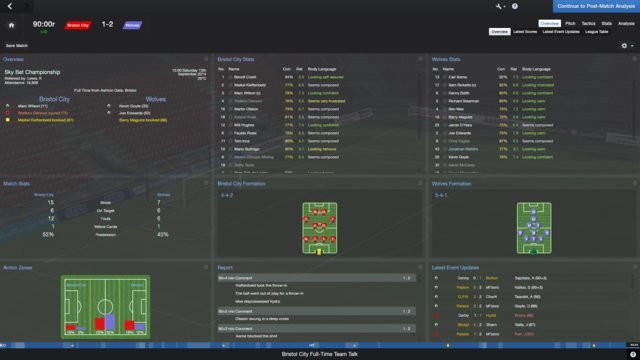 Manager's review
The only change Booy made to the side that drew at Yeovil was bringing in Will Hughes for Franco Zuculini. City started brightly enough and took a deserved lead through a Mark Wilson header from a Hughes corner. However from then on it went sour as Wolves managed to score each side of half time to take a 2-1 lead. City then huffed and puffed but couldn't find an equalizer despite piling on the pressure. To compound matters centre-back Stefano Denswil picked up a groin strain in the 75th minute and will likely be out for the next three weeks.
Login to Quote 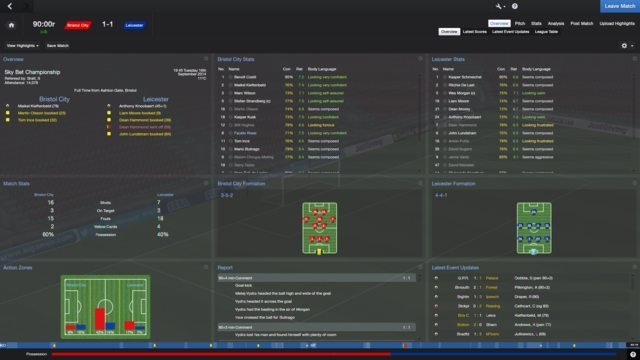 Manager's review
Andrew Booy made one enforced change to the side that lost disappointingly to Wolves 3 days ago with Stefan Strandberg replacing the injured Stefano Denswil in defence. The Robins were again unable to please the Ashton Gate faithful and failed to pick up three points at home. In fact Bristol City have not won a home game since the 2-1 success against Blackpool on the opening day of the season. Perhaps Booy was lucky his side managed to even draw this one as his side were 1-0 down at half time only for Leicester's Dean Hammond to get sent off mid way through the 2nd half. City were then able to grab a point thanks to Kieftenbeld's 1st goal for the club with 10 minutes remaining. In the end Leicester held on for a good away point.
Login to Quote