One does not simply call Sulley Muntari deadwood.
Login to Quote

Jer
7 years
Welcome back Or :). I don't know if you remember me, but if you don't s'okay. Anywaaays, best of luck with Milan, even though I 'dislike' them.
Login to Quote

A.C. Milan has announced today the arrival of 8 players who are going to play a major part next season. 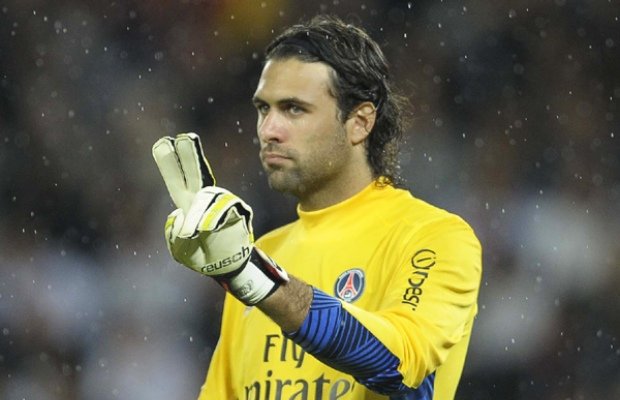 Sirigu is the first signing made by Dabool. He was unsettled at PSG and wanted a switch back to Italy. Milan jumped on the offer and got him for an amazing price of £4.3M. Sirigu will be A.C. Milan first-choice keeper next season. 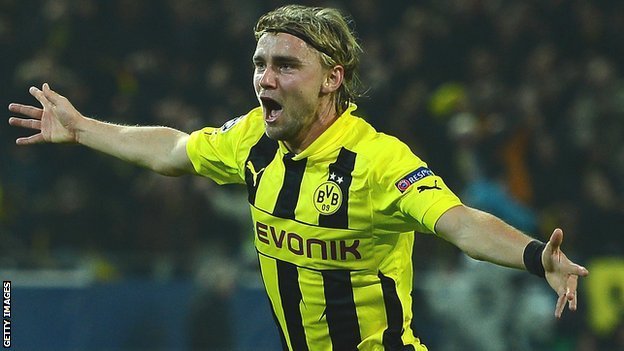 A.C. Milan had a problem in the left-back spot ever since the great Paolo Maldini hanged his boots. With £7.25M payed for his service, Shmelzer will hopefully be the solution instead of Kevin Constant. 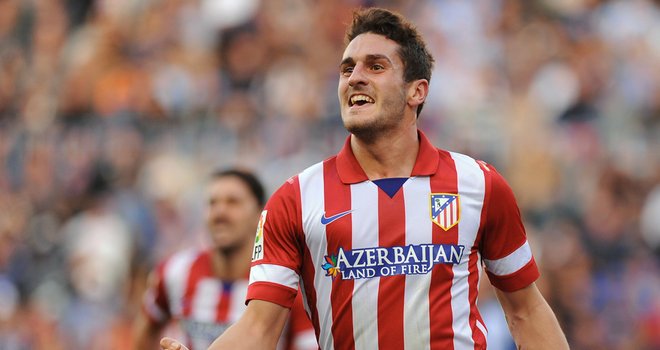 Following the departure of Sulley Muntari, Milan wanted to strengthen their midfield. Koke had an amazing time with Atletico Madrid and seemed like the perfect match for the Italian giants. 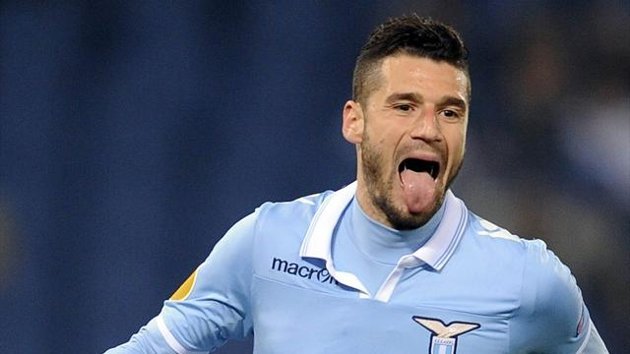 There is no doubt that one of Italy's most creative players is Candreva. His cooperation in the national team along side Mario Balotelli and Stephan El Sharaawy is excellent, and A.C. Milan worked hard to land him from the rivals, Lazio. He will help find the deadly touch at the end of the attacks. 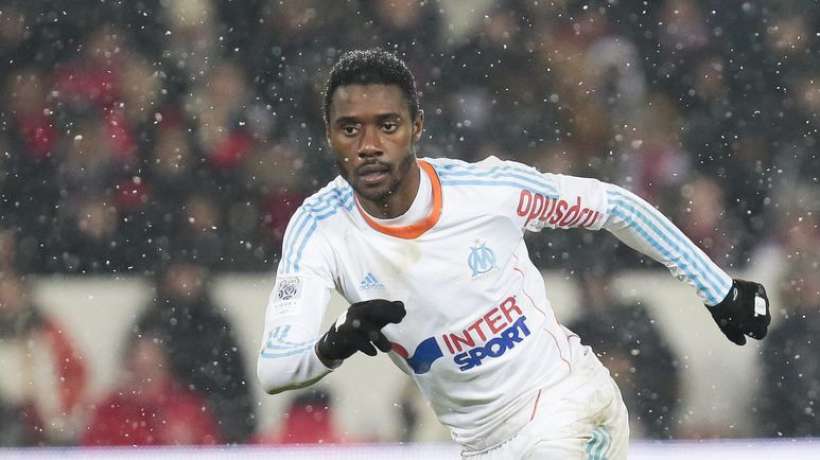 The Cameroonian is a natural defender. He is strong, and have great physical attributes, and can finally solve the problem that A.C. Milan have in the back four. 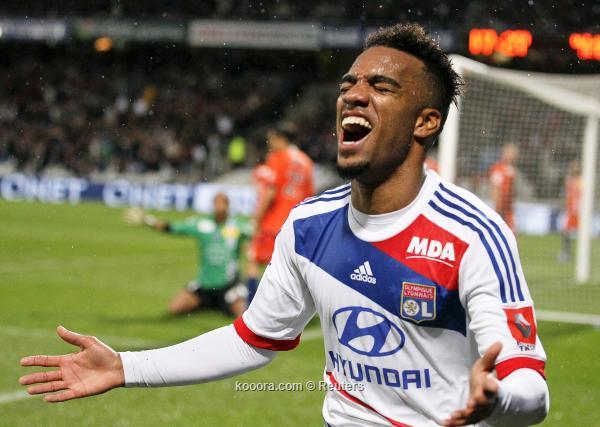 When Emanuelson were sold to Lyon, it opened a gate for Lacazette to switch to red and black. The Frenchman have great dribbling skills and great technique and he is only 22 years old. 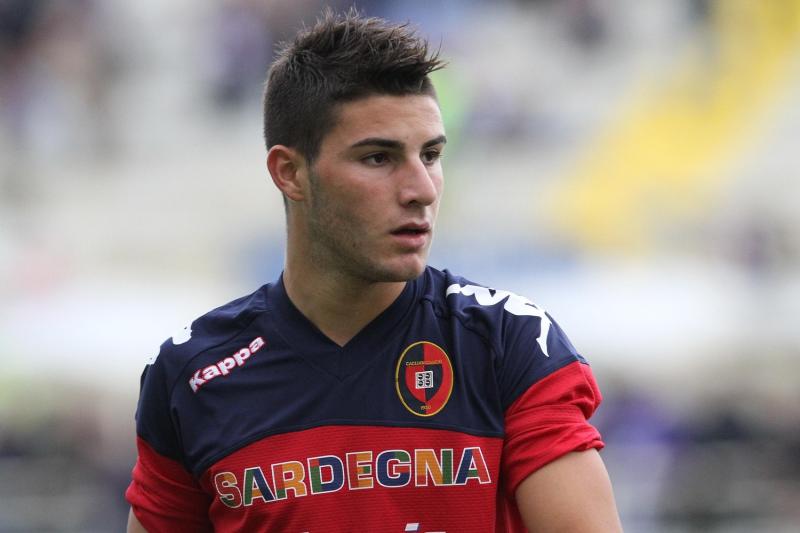 Nicola were brought to A.C. Milan to back up the defence alongside Mattia De Sciglio. The Italian kid is already showing great prospect and can develop into becoming one hell of a defender. 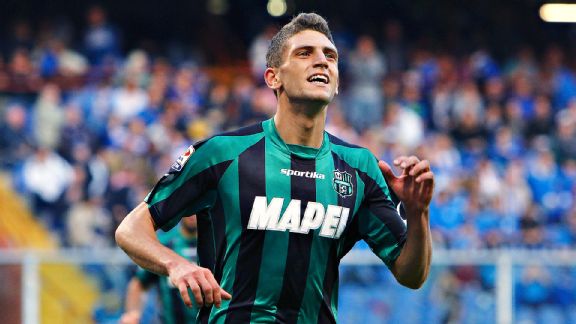 Another one of Italy's best hopes. His player card was split between Juventus and Sassuolo, and since A.C. Milan bought Sassuolo's part, Domenico is playing at their ranks.


Silvio Berlusconi has allowed the spending of Milan's money in hope that now, after the team has finally improved, Milan will be back on top.
Login to Quote

Jer
7 years
Some interesting signings, and which are very costy o.O... Surprised on how cheap Sirigu was at! Champs for sure with a squad like this! Who's going to start at RB, Abate or De Sciglio?
Login to Quote

All the way to October

After the transfer journey of A.C. Milan, it's time to see how they face the start of the season. 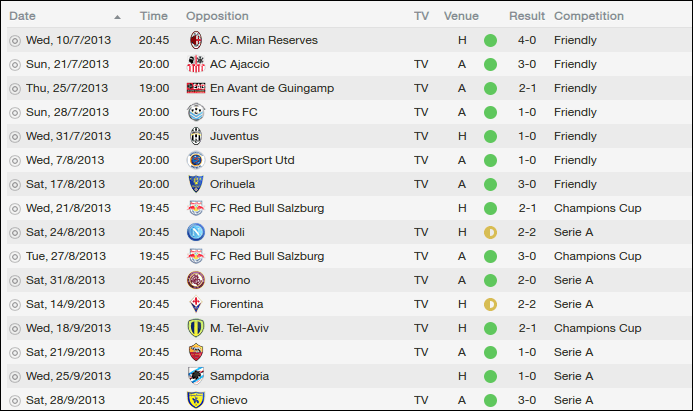 As you can see, we started with 7 friendly games to develop our playing style for the next season. Most of the games wasn't so interesting, but the 1-0 win over Juventus really gave me hopes towards the season.

After the friendlies, we played against Red Bull Salzburg in the Champions League Playoff stage. We won 2-1 at home (thanks to a brace from Candreva on his debut!) and 3-0 away to proceed to the group stage.

In our group we drew German side Leverkusen, English side Arsenal and of course, Israeli side Maccabi Tel-Aviv.
We played our first CL game the season against Maccabi Tel-Aviv and won 2-1 to gain 3 points. 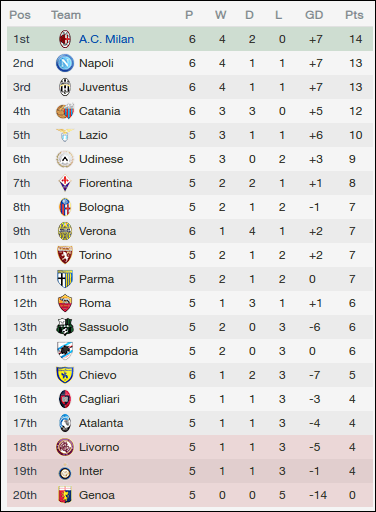 In the final fixture against Chievo we finally got past Juventus and Napoli and got to the 1st place. I loved the fact that we managed to beat Roma away 1-0. Also, Mario Balotelli and Robinho each have 4 goals in the league so far. 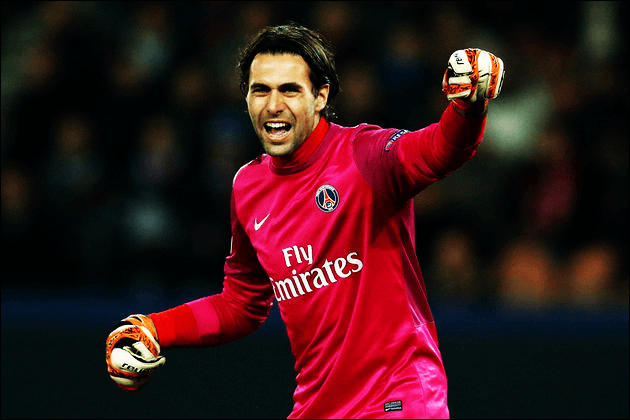 Balotelli and Robinho are scoring, Candreva is assisting, Koke is keeping the ball, and Nkoulou is doing amazing job at the back. But more than all of them, Salvatore Sirigu, our recently signed goalkeeper has saved us so many times so far this season, and kept by himself so many clean sheets. We will need Sirigu to continue this kind of form throughout the season!


That's it guys, that was the update. Hope you enjoyed it!
Login to Quote

pompeyblue
7 years
Good luck mate!
You seem to be a 'legend' of story writing so I look forward to seeing how you do, you've already got off to a great start

October - A month to remember 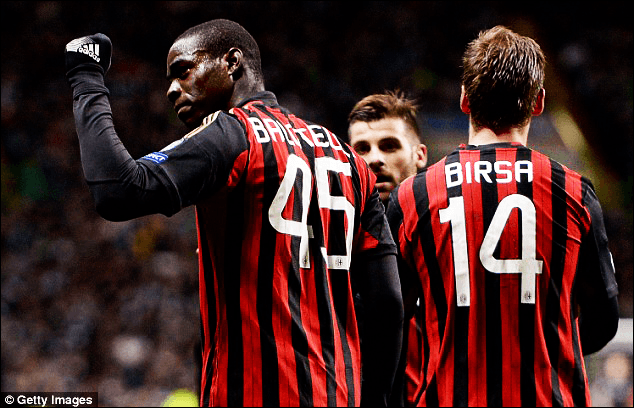 A.C. Milan are keen to continue their great run of form throughout October, after an amazing start to their season.

We started the month with a very hard away game against Arsenal in the Champions League. Luckily for us, Arsenal's Hector Moreno has been sent off, and Balotelli managed to score twice to win the game.
Later on we faced Bayer Leverkusen at the San Siro. We managed to beat them 3-1 and gather another 3 valuable points.

In the Serie A, we faced Torino, Udinese, Bologna and Cagliari. We won all four games, including a very tough away game against Udinese, and remained 1st at the league. 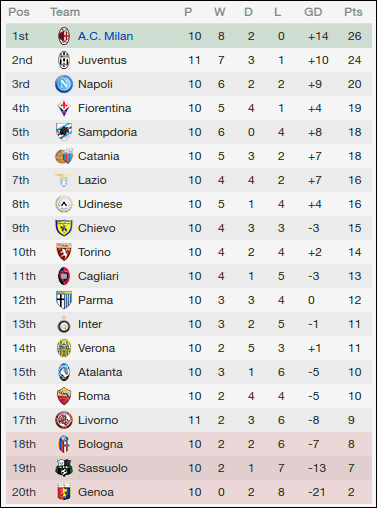 However, we did have some bad news this month. Koke and Mexes were both injured for about 4 weeks, and that could really hurt us throughout the rest of the season.


That's it guys, that was the update. Hope you enjoyed it! Please comment your opinion ;)
Login to Quote

LFC
7 years
You're doing fantastically!! Keep up the good work, both as a manager, and as a writer

fmhunter
7 years
Mad start - keep it up!
Login to Quote

Josh_MU
7 years
Great start! Loving your update style; undefeated in the league and in the UCL, Nice!
Login to Quote