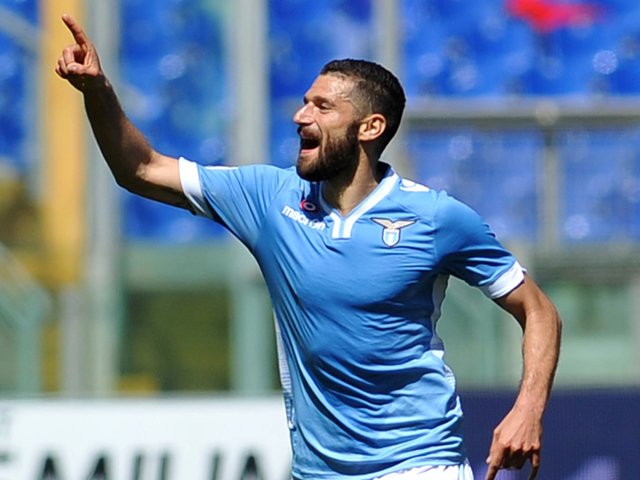 Candreva celebrates as his brilliant goal gave Lazio a historic victory over the Galacticos of Real Madrid.

Madrid were obvious favourites for the match and came out of the traps early on with Gareth Bale and James Rodriguez testing Marchetti with long range efforts. Lazio's defence held strong but a slip from Astori allowed Benzema a clear chance on goal. However the Frenchman hit his shot to early and the chance sailed harmlessly wide.

With half an hour of Madrid domination approaching. Thiago Motta, who was booed with every touch of the ball due to his Barcelona and Atletico history, dispossessed Kroos on the halfway line. The Italian played a chipped through ball that evaded the Galactico's backline allowing Candreva to nip in and set himself for a shot with his first touch and bury the ball into the far corner with his second.

Kroos held his head in his hands as the La Liga leaders looked mortified to going a goal down. Lazio had another chance soon after but failed to double their lead as Iker Casillas made a smart save low to his right to deny Candreva again.

Madrid picked up the pace in the second half as Gareth Bale found space on the right. The Welshman dropped a shoulder and moved infield evading Motta and Verratti's efforts to stop him. The former Spurs man hit a trademark dipping drive which cannoned off the underside of the bar. With Marchetti beaten, Astori was first to the ball and dived to head it over the bar as Benzema looked to pounce on a tap-in.

Into 3 added minutes at the end of the half, Lazio had all 11 men behind the ball and looked to stifle any efforts just as they had done against Chelsea. Finally the referee blew the whistle to earn a historic win for Matt Cox's men, that meant that Lazio had an away goal to protect in next weeks second leg at the Olimpico. Real Madrid manager Carlo Ancelotti looks dejected as his side of megastars are dumped out of the Champions League.

Lazio will play Manchester City at the Olympiastadion, Berlin in both clubs first ever Champions League Final appearance
Lazio Starting XI (5-2-3): Marchetti, Cole (C), Alvarez Balanta, Astori, Bellusci, Abate, Verratti, Motta, Ince, Candreva, Giovinco.
Real Madrid Starting XI (4-2-3-1): Casillas (C), Ramos, Peruzzi, Pepe, Ramos, Carvajal, Kroos, Illarramendi, Di Maria, Isco, Bale, Benzema.
Lazio will play Manchester City after the Rome club replicated their score and performance against La Liga heavyweights Real Madrid. Ancelotti's men find themselves in a tough position as in the space of a week following their defeat to Lazio have lost top spot to Barcelona in the league and have confirmed that Cristiano Ronaldo will be out until the end of the season.

However like the previous week, Madrid started at blistering pace with Bale and Di Maria testing Abate and Ashley Cole early on. Cox had set up his men to defend and counter as striker Sebastian Giovinco was rarely seen troubling the opposition's backline as he looked to add support to the midfield players.

German maestro Toni Kroos was the dictator for Madrid as showed his range of skills by zipping long and short range passes all over the park as Real looked to bounce back from their torrid week. The recent World Cup winner played a delicately chipped ball over the defence for Bale to run on to. The Welshman cut inside Balanta and struck an effort through the legs of Marchetti, only for Astori to produce a heroic last minute sliding block to stop the ball rolling over the line.

Astori again was the hero for Lazio as two minutes later as Sergio Ramos climbed highest from a Kroos corner to thump a header goal-wards. Astori was on hand to flick the effort over the back of the net as Marchetti was stood beaten.

Just after the half hour mark, Madrid were caught out again just like in the last leg as Lazio countered with maximum efficiency. Astroi played a long ball forward to Giovinco who quickly switched the ball to his left to the onrushing Ince. The 23 year old Englishman then beat Carvajal and slid a cool finish under Casillas to give Lazio a 1-0 lead on the night and a two goal advantage overall.

In the second half Ancelotti threw on James, Alonso and Jese but all three were unable to find a way passed a stubborn Lazio back-line. Madrid looked spent and defeated as the referee checked his watch and blew up for full time, confirming Lazio's place in the 2015 Champions League Final!

Walter
5 years
Manchester City will be really tough, but after overcoming Real it's certainly not impossible!
1
Login to Quote

Coxy
5 years
Walt: I feel the same way! Chelsea was the hardest challenge so I feel we can go all the way!
Login to Quote 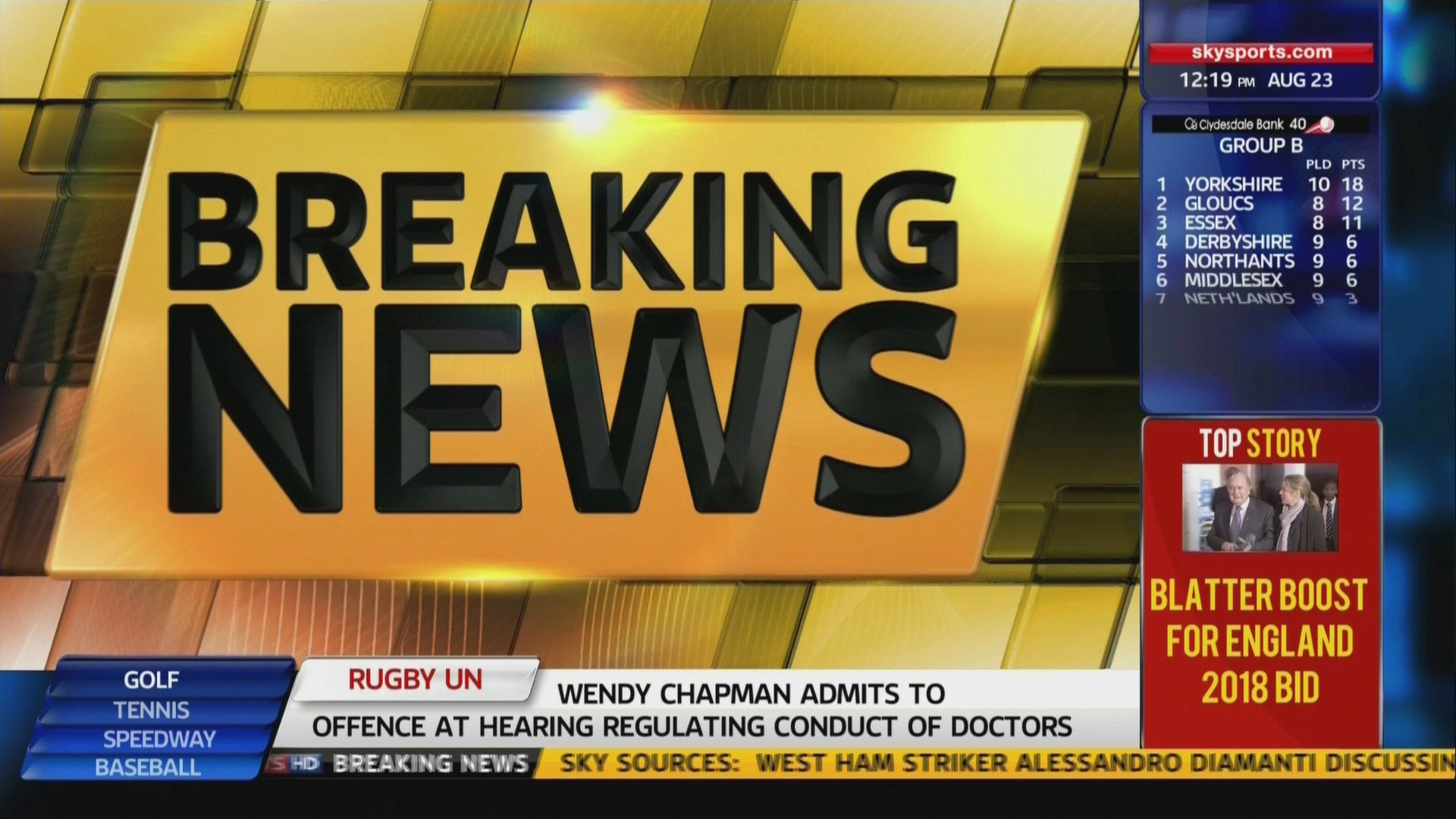 S.S. Lazio have released a statement declaring that manager Matt Cox will not sign a new contract and will become a free agent on June 30th 2015.
English manager Matt Cox will leave Champions League finalists Lazio at the end of the season, the club has announced. Lazio president Claudio Lotito announced a few months back that the club were in negotiations with Cox over a new contract but an agreement was not reached despite numerous efforts.

Cox was appointed in June 2013 despite any managerial experience, but two years on he is now regarded as one of the greatest manager in the game today. The Hereford born tactician has taken mid-table Lazio to this year's Champions League final in his first ever UCL campaign. During his reign Cox has also won one Serie A, one Coppa Italia and one SuperCoppa Italia and is could potentially add three more trophies to his mantra before the season is over with the Champions League Final, Coppa Italia Final and European U21 Football Championships still to be contested.

Interest in Cox is believed to be high with Real Madrid, Bayern Munich, Monaco, Liverpool and Celtic believed to be interested in making an approach for the departing Englishman. Liverpool who finished 9th in the Premier League this season have just sacked Northern Irishman Brendan Rogers and are thought to be favourites for Cox's signature should he be interested in a move to England. However the pressure is on Carlo Ancelotti in Madrid after letting a 12 point lead slip to allow Barcelona to regain ground and win La Liga in the final weeks of the season. Cox's Lazio also eliminated his side in the Semi Finals of the Champions League including a 1-0 win at the Bernabau.

Despite their attempts to keep hold of Cox, club president Claudio Lotito released a statement to thank the manager on his two years with the team: 'It is with a heavy heart that I thank Matt for everything he has done to this great club. He will always be welcome back here and I'm sure I speak for every Biancocelesti fan when I say he has a special place in our hearts.' Lotito added that despite Cox's great work, his job is not done: 'Whilst we tried our best to keep Matt at the club, we could not find an agreement both parties could agree on. But we must remember that for now he is still our leader and we have two of the biggest matches in Lazio's history to compete in before we say our true farewell.'

Cox was unavailable to comment as he prepares his side for the Coppa Italia Final vs Juventus this weekend and the club has asked for the media to respectfully avert any questions about the manager's future until the Champions League Final has been played.

'What team would you like to see me take over? Comment on where you want me to continue my story, thanks lads!'
Login to Quote

Walter
5 years
Well, depending on what's available, I'd like to see you go to a small-ish nation, like Portugal or Germany or France and do what you've done with Lazio

atreeg
5 years
Just caught up with this and read through the whole thing!
Absolute great read!

Coxy
5 years • Edited
Walt: Surprisingly quite a few jobs! Celtic, Liverpool, Dortmund, Monaco and Arsenal are free. Very insecure jobs are Real Madrid, Barca, Munich and United. Although I could go something completely different all together!

Atreeg: Wow thank you so much mate, that's a big read! I appreciate it and I'm glad you enjoyed it.
Login to Quote

You are reading "S.S. Lazio - I Biancocelesti".