Feliks
6 years
Walter Good thing you like him, because you can check him out on your story as well! How convenient!
Login to Quote

Xander
6 years
I love reading someone doing an Australian team - hope when FM 15 comes you may do one again? (wink wink nudge nudge)
Login to Quote 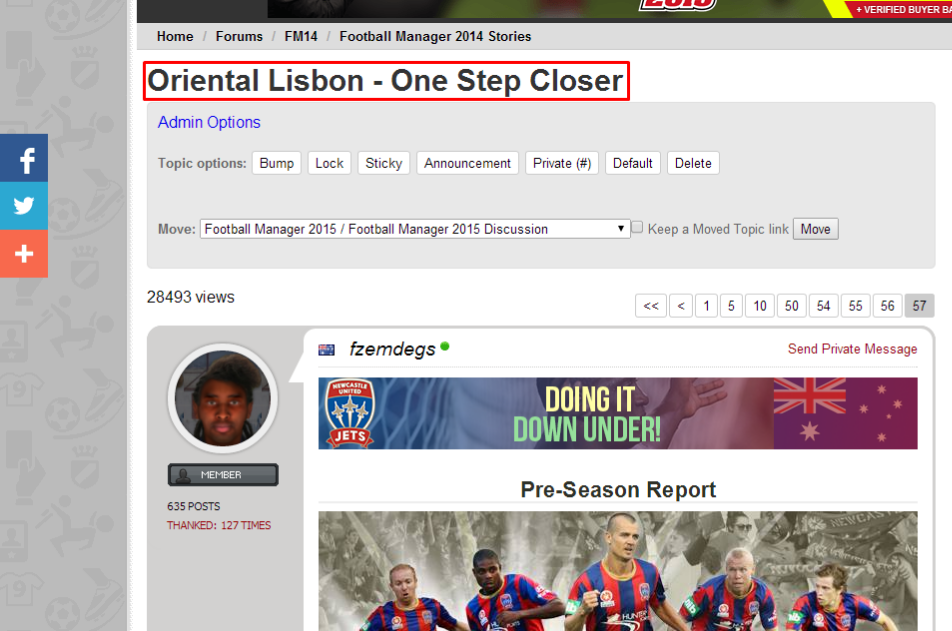 Walter Tis so nice you can read it twice

sott114 Chote is actually only Kiwi, no other nationalities
Login to Quote


Thanks for all the support guys, it's great to reach this milestone and hopefully I can continue on to many, many more of them.
Login to Quote

http://s40.photobucket.com/user/fzemdegs/media/Untitled_zpsbc61beb5.png.html
James Virgili made the most of limited opportunity and starred
In a decent first 3 games, it was a rollercoaster as we gradually got better, culminating in a great win to round off the month. However, the start was less than good so perhaps it’s a case of easing the team into the season. We also had some injury problems, but let’s look at the month in more detail before.

http://s40.photobucket.com/user/fzemdegs/media/Untitled_zps7af8dfa1.png.html
To begin the season, we played our fiercest rivals in the Mariners, and at their home ground it would be a great clash. We got off to a bad start when in the 24th minute Adam Kwasnik’s deep cross found the head of Matt Simon and we went down 1-0. On the brink of half time however, a hasty turnover found Heskey all on his own in the box and he slotted it home with some venom attached. At half time, the boys regrouped with confidence, but then the mercurial Simon managed to turn Connor Chapman inside out in the box and slammed home his second to down us 2-1.
Positives Heskey still has it in him.
Negatives Chapman didn’t do the best job on Matt Simon, who dominated the match.

http://s40.photobucket.com/user/fzemdegs/media/Untitled_zpsb15df2d1.png.html
Our first home game of the year would be a tough ask, as we came up against premiership defenders Wellington Phoenix still with Hernandez and Huseygems who terrorised the league last season. It was the latter that goaled just before half time to put us behind. Then, with time running out, I feared we would lose again and start our season with 2 embarrassing defeats, including 1 at home. However, I was saved, when in the 87th minute a header away from the corner found Josh Brillante, who passed it to Carl Valeri. He volleyed the ball with fury right into the bottom left corner and saved the day with a wonderful goal.
Positives Good to see my star making the impact
Negatives Not the best way to treat the fans first-up

http://s40.photobucket.com/user/fzemdegs/media/Untitled_zpsd4fb5289.png.html
We got a chance to redeem ourselves at home against the highly unpredictable Melbourne Heart. What I got from the team was a beautiful, counter attacking, free flowing game that saw us go 3-1 up at half time thanks to goals from Heskey, Goodwin and Virgili and a great goal from Mate Dugandzic in the opposition. It was a joy to behold, and when Jacob Pepper put the cherry on top after 68 minutes to make it 4-1, I knew that the team had found their way.
Positives The attacking football! I’m so used to 1-0 wins

Negatives No, no negatives. This is real football!

http://s40.photobucket.com/user/fzemdegs/media/Untitled_zps60bab7aa.png.html
So for all my rambling about bad form, our 1-1-1 record coupled with a big win means we sit in 3rd after 3 games. Of course, there is plenty of football to be played so it’s my job to keep the team up in this position!

http://s40.photobucket.com/user/fzemdegs/media/Untitled_zps3e196781.png.html
My new Australian Marquee Carl Valeri instantly delivered, scoring a great goal in the Phoenix game and running the show as the Box-to-Box Midfielder. A great month from the gun and I’m hoping for plenty more.

With our toughest assignments out of the way, November looks to be a month where we can really pick up the pace and get some points on the board. Join me then to see how I do!
Login to Quote

Ducksworthh
6 years
Great win against Heart, hopefully you can keep that kind of result up.
Login to Quote

Neal
6 years
Lovely update style my friend, I love it. Kind of poor results, but you're doing well in the standings!