squirmy420
7 years
You've got the momentum now! Keep this wonderful run going and you'll be top 3! For sure.
#5thpage
Login to Quote 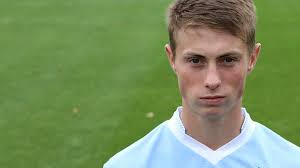 The Newcastle Jets have today announced the signing of Manchester City’s 19 year old winger Alex Henshall. Henshall has been brought in as a short term replacement for injured Craig Goodwin and the 3 month loan deal will cost the Jets around £12,000. 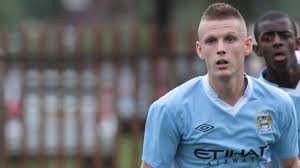 Alex Henshall is a left winger, renowned for his explosive speed. He also possessing good dribbling skills, and although he is a little raw, his speed alone may just be able to make an impact for the Jets. 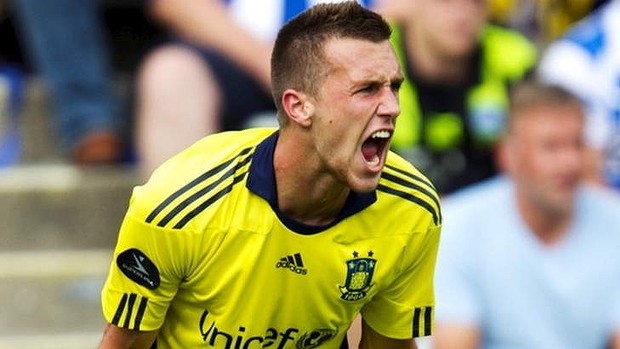 In total, 7 deals were made on deadline day, with 4 loan moves and 3 free transfers. Arguably the biggest deal of the day was Brent McGrath, above, who moved to Melbourne Victory on a free. Sinan Bytyqi moved from Manchester City on loan to Melbourne Heart, whilst Adam Najar, Callum McFadzean, Jordan Brown and Jonas Salley also joined clubs.
Login to Quote

Griffo
7 years
Well as a City fan... I am chuffed haha!
Login to Quote

Neal
7 years
Nice signing, hope he does well for you. A tad excessive on the ,hr, but otherwise nice update

The Jets stamped themselves as the iron clad defensive team of the competition.
We remained undefeated throughout the month and we have now gone 8 games without losing. We conceded just 2 goals, and furthered our reputation as the best defensive team in the competition. In an incredible turnaround, in 2 months we’ve risen from 8th to 3rd and we don’t look like stopping. Here’s a closer look at the month that was. 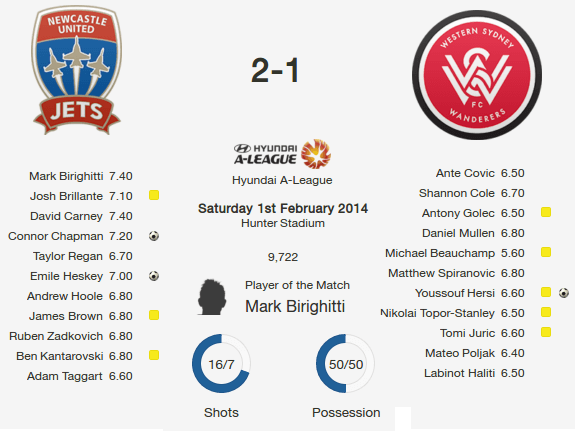 The Wanderers were in what was our position a couple of months ago, drawing lots of matches and not doing quite enough to win. We had a win in mind for ourselves and we started in the most bizarre of fashions as a long kick from keeper Mark Birighitti bounced over the head of Michael Boxall and da beast Emile Heskey had an easy chance in front of goal, slotting it home to make it 1-0. David Carney, our corner king, swung one beautifully for youngster Connor Chapman to tap it in on 17 minutes. Chapman however fouled Hersi clumsily in the box and the Dutchman breathed some hope into the Wanderers as he slotted the penalty. Luckily, we held on and Birighitti was awarded man of the match for both his assist and his saves.
Positives - If Birighitti can combine great kicking with amazing goalkeeping every week, I have a young, durable, talented goalie. Every manager’s dream.
Negatives - Clumsy challenges can lose you matches, and Chapman needs to learn that to progress to his full potential. This would be our first big test in weeks, against an in-form Phoenix who have surprised this season to be in 2nd. Their main threats were Stein Huseygems, their star striker, and his partner-in-crime, Costa Rican attacking midfielder Carlos Hernandez. The 2 had devastated the competitions for weeks, and it was no surprise, after an idle first half, Huseygems scored on 54 minutes. I feared our unbeaten streak was going to end, but then an all-too familiar scene occurred. David Carney took the corner, Taylor Regan was waiting, and he headed it in for the 3rd Carney-Regan corner goal this season. We clung on for the rest of the match and I was content with matching it with one of the best in the league so far.
Positives - Another great defensive effort despite the early goal, Birighitti is hands down the best keeper in the comp at the moment
Negatives - I need some more open play goals, as the last 3 have been corners and incredulous long balls. Another smash and grab match, similar to the Wanderers one. Brisbane were just below us in the table, and it was going to be a tight clash at their home. Mark Birighitti pulled off another wondrous long bomb that resulted this time in a Ruben Zadkovich goal, and we were defensively tight for the rest of the game. It’s always nervy to have to defend for almost 90 minutes, buts a win is a win and we continue our run.
Positives - Birighitti is just insanely good at the moment, feeling so secure right now
Negatives - Emile Heskey struggled, and I’m hoping he can recapture his early form in the coming weeks. We met what could become the rivals of our team in this save, the Sky Blues. After our crushing 3-0 win over them in Sydney, they were hell-bent on revenge. It was another defensive game, with most of the attacking coming from Sydney FC. However, in the 39th minute, a Josh Brillante cross found what seemed to have been Emile Heskey’s head but was actually Rhyan Grant’s and we went up. The game intensified from there, with some great attacks by the Sydney outfit but unfortunately they couldn’t get through and we managed to extend our unbeaten run to 8 games.
Positives A good defensive effort against the number 1 team in the country.
Negatives Alex Henshall didn’t have a good game and was injured, I’m hoping he can do better next time.

We sit in 4th position, with a game in hand over 3rd, and we are the in-form team of the competition. We have conceded just 14 goals in 21 games, a league record, we seem as good as ever. Onto March!

For the second month in a row, my goalie Mark Birighitti wins Player of the Month. However, this month he won it with a combination of saves and 2 of the most incredulous assists I have seen. He now has 10 clean sheets from 19 games and is hands down the number 1 keeper in the comp at the moment.

Next we play Wanderers again, then 3 more matches before we play our last 3 and then finals! Hopefully we can stay in this great position and maybe even battle for the title. Join me then!
Login to Quote

Walter
7 years
Fantastic month and update to go with it! Loving the graphics, detail and layout - you're in great form, as well!
Login to Quote

Feliks
7 years
Walter Thanks Walt, I try my best

Griffo He's a first team regular, and is progressing very well. Gone from 2 to 3 stars current ability
Login to Quote

Zed
7 years
Good first season, if you don't win the title, you've got a very big chance on winning the play-offs!
Login to Quote

Aaron
7 years
Love the layout and graphics! The use of screenshots is real good to. Great month also.
Login to Quote

AlexTHFC
7 years
Loving the layout and graphics. This is looking very, very good

TVDLC123
7 years
Wow, great presentation and graphics, plus a solid month in what I know is a tough league, so well done

squirmy420
7 years
Top notch graphics, decent month. Keep the faith and you can finish this one strong!
Login to Quote

pokarioboy
7 years
Absolutely amazing layout! I've been busy recently with school, and it's awesome I come back to a new and amazing A-League story! Good luck with it my friend, hopefully you can win the play-offs