Tireless Sydney FC midfielder Daniel De Silva has won the A-League Young Player Of The Month award after a superb month which included a starring role in the 3-1 over Okayama FC. In second place was Wellington's Matthew Ridenton and rounding out the top 3 was De Silva's Sydney teammate Daniel Batty.

De Silva has had a brilliant season after an average first year at Sydney FC, and the playmaker has been a major catalyst for the Sky Blues in their run for the title. The 20 year old has kicked 3 goals and assisted 2 over the course of the season, picking up 3 best-on-ground performances along the way. The central midfield trio for Sydney FC, comprising De Silva, Milos Dimitrijevic and Jackson Irvine is feared across the league and De Silva is a major factor.

De Silva will hope to continue his fine form in the last 2 months of A-League action.
Login to Quote

Ziechael
5 years
Wow, missed so much but what a push to secure that top spot, well played mate. Good luck in the CL though, that group is a beast, the good news though is that if you can come through that you stand a damn good chance of winning the whole thing!

This could well be YOUR year!
Login to Quote

Feliks
5 years
Ziechael Thanks for the support, it's a tough group but it looks promising after that 3-1 win.

Feliks
5 years
Neal It does indeed, I'll hopefully pick up some more awards at the end of the season

And secondly people just can't go out and buy FM15 for the sake of getting it - it costs money, and sometimes people can't afford it. If you don't have anything nice to say, don't say anything. Please think about your word choices in future.
Login to Quote

And secondly people just can't go out and buy FM15 for the sake of getting it - it costs money, and sometimes people can't afford it. If you don't have anything nice to say, don't say anything. Please think about your word choices in future.

And secondly people just can't go out and buy FM15 for the sake of getting it - it costs money, and sometimes people can't afford it. If you don't have anything nice to say, don't say anything. Please think about your word choices in future.

Wasn't a funny joke at all, I have to say. You come across as pretty rude.
2
Login to Quote

Seriously now you're just being an idiot, no one agreed with you so get over it and leave the thread alone
Login to Quote

We played a career-high 7 games for the month of March, with the league heating up and also the Asian Champions League. A lot of players were rested, let's see how we coped.

The first game of the month was against Wanderers FC, and an unlikely scorer got us rolling. Centre back Aaron Calver scored in the 13th minute, and then Dimitrijevic gave us a 2-0 lead after just half an hour. The Wanderers refused to back down however, and Tomi Juric squeezed one in just after half time. Seb Ryall conceded a needless penalty in the 74th minute, and Mateo Poljak converted, making it a 2-2 draw.

We'd really been struggling against Central Coast Mariners this season, and when Nick Fitzgerald scored for them just 9 minutes in I feared for the worst. Luckily, Ander Bergara levelled it 6 minutes later and Battman managed to get us in front after just 20 minutes. Batty then sealed the game with a 69th minute strike to give him the brace and give us a 3-1 win.

Okayama FC may have been a hard task, but Seoul are the real heavyweights in our group and this game would give us a great indicator of how we would do. The Koreans had some decent chances in the first half an hour but we finished ours off, with a De Silva goal giving us a 1-0 lead going into half time. The home fans were silenced in the 71st minute when Battman doubled our lead, and the captain Dimitrijevic gave us a huge win, 3-0 over K-League champions Seoul.

Flanked by 2 ACL games, I rested 7 of my first teamers for the A-League clash with Perth Glory and the reserve team did a capable job. Chris Harold scored one early for the Glory but the experience of Ryall at corners prevailed as he scored just before half time. We held on for the 1-1 draw.

Jiangsu was a chance to really pile on the goals, as we had already proven our worth against Seoul who had thrashed our opponents for today. Ander Bergara had a field day, scoring in the 16th and 23rd minutes to give us a 2-0 lead at half time. When the unsettled Shay Spitz gave away a penalty, Bergara stepped up and coolly converted the kick to seal his hat trick. Batty scored a 72nd minute header to rub salt in the wounds as we ran out 4-0 winners.

The marauding Melbourne Victory were making a real play for the title, and with the fixtures stacking up we really had to be careful in this game. My superb midfield frustrated the living daylights out of the Victory as they picked up 5 yellows, and my exhausted team held on to record a 0-0 draw.

We finally got a 7 day break, however we would be lining up without Batty and Dimitrijevic. Brisbane Roar started very well with a Jung-Hyun lob in the 2nd minute. Batty's replacement, Josh MacDonald equalised just 7 minutes later and after a tussle in the first half he got his brace on the brink of half time. After the break, he lived the dream with a toepoke to seal his hat trick and the win. Jovanovic got a late one for Brisbane but we held on to win 3-2.

We've qualified for the finals now, and with 2 games to go we should be winning the title for yet another year. The form of the Victory is a tad alarming, but all we need is 1 win and we've done it.

Absolute domination in Asia, we've essentially qualified from the group stages already and we're only halfway there. As the league begins to get more serious and finals approach, I can rest players in the ACL knowing that I'm going to go through anyway. 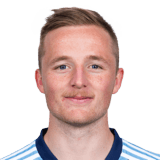 Rhyan Grant's stamina really came into it's own in March, as he played all 7 games often filling in for tired teammates. Was very productive as well, including starring roles in the 2 ACL games this month.
Login to Quote

Xander
5 years
Told you, knew you would not beat Western Sydney, anyway. An OK month, expected much better.
Login to Quote

Sydney FC have been hit extremely hard by injury, with the stunning news that captain Milos Dimitrijevic and star striker Daniel Batty will both miss 3 months with the same injury, ruling them out for the remainder of the season. The pair are crucial to Sydney's plans, and fans will be hoping the team can cope without them in their A-League and ACL campaigns.

Dimitrijevic injured his hamstring in the ACL match against Jiangsu, and after pulling up short from a contest and hobbling off, physios confirmed the next day that he had torn it. The Sydney FC captain will visit a specialist and will hope to return to the fray next season.

In a cruel twist of fate, 19 year old Daniel Batty also tore his hamstring. Manager Sean-Paul Lodovico feared the worst when the towering striker hobbled off in the Big Blue, and he was furious after physios again informed him of a hamstring injury. Batty will also miss 3 months, and at the worst possible time as his presence and talent will be sorely missed in the finals and latter stages of the ACL.

As replacements stand, Josh MacDonald has done a superb job in place of Daniel Batty, with the poacher bagging a hat trick in Batty's first game on the sidelines. Dani De Silva is expected to replace Dimitrijevic as the box-to-box midfielder with Terry Antonis becoming the playmaker. Also in consideration is Hagi Gligor, and Chianese is a viable option instead of MacDonald.

Although this is a huge blow, Sydney FC have consistently shown they have the depth to compete every week in the A-League and the Sky Blues should continue their stellar run in both the league and the Asian Champions League.
Login to Quote