The fixture list for Sydney FC's pre-season has been released, with 8 friendlies scheduled over the next few weeks.

This season sees the beginning of the Aspire program, with Sydney FC visiting 3 youth academies in Sydney University, the Australian Institue of Sport and the South Australian Sports Institute. The club has also arranged a friendly with each academy.

As part of the Dragas deal, Bayer Leverkusen will visit Allianz Stadium to play the Sky Blues. This game is expected to be sold out as fans look forward to a clash with a European heavyweight.

Then the run-in to the season begins, with 4 easy friendlies against Fernhill, APIA Leichhardt, Cooma and South Coast Wolves. This should be a prime opportunity to build fitness and Sean-Paul Lodovico will hope that after this pre-season his players can get out and defend their title.
Login to Quote


'Usai Not For Sale'

Sydney FC goalkeeper Sebastian Usai, coming off a breakout season and a league title, has been the subject of a £220,000 bid from Serie B club Pisa. Once of Australia's most underrated goalies, the 27 year old is now respected across the A-League and has even garnered the interests of Europe. But Sean-Paul Lodovico says he isn't interested.

Sean-Paul Lodovico: Sebastian [Usai] is not for sale at any price unfortunately, so Pisa will have to look elsewhere. The sale of Dragas means we're financially sound, so I don't need the cash and Sebastian is an indispensable member of our squad.


For the moment, Usai seems content with life in the A-League, especially given the lure of ACL action. Unless Pisa can come up with a ludicrous fee, it appears Sebastian Usai will remain a Sky Blue for the indefinite future.
Login to Quote

On the 15th of September every year, Sydney FC signs up and coming players from the surrounding areas and beyond to join their youth academy. This year, after the title winning season, an unprecedented 274 players trialled with the club but manager Sean-Paul Lodovico chose just 3 to sign. He spoke to the Sydney Morning Herald about his decision to cut so many players from the list.

"With a bloated youth squad at the moment, I've decided to streamline it and only sign the very promising lads. This year, 3 players have joined the set-up. Nazario Petrocco is a local boy from Penrith, a pacey young striker and our best prospect. Not far behind him is Brandon Cummings, the centre mid. I brought him over from Western Australia and I see a lot in him. Given some time he could be the next Milos [Dimitrijevic]. Then the last lad I signed was right winger Brandon Brown, from the capital. Brownie possesses great technique and a bit of flair, and if I can get him training hard he may just blossom. He's a bit of a smokey however."

Walter
5 years
Petrocco definitely the pick of the lot, looks a great prospect

shame about his determination though

Feliks
5 years
Walter Yeah, hopefully he can do a job anyway
Login to Quote


Prepare Yourself For Goals 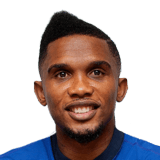 Not since the arrival of Alessandro Del Piero and Shinji Ono has there been this much hype in the A-League. This season will see 2 incredibly talented strikers go head-to-head in what should be an incredible Golden Boot race. Samuel Eto'o and Daniel Batty may not be the most predictable pair, but there's no doubting they both have considerable talent.

Samuel Eto'o is possibly the biggest name to have ever graced our shores, rivalling the great Alessandro Del Piero. The 36 year old has signed for the Newcastle Jets, and although he has lost his pace he is still a lethal finisher and gets into all the right positions.

Meanwhile Daniel Batty is in many ways the polar opposite. A virtual unknown when he signed for Sydney FC, the 19 year old, 194 cm monster of a striker has been phenomenal over the pre-season, scoring an insane 14 goals and assisting 6 in just 8 appearances. The New Zealander is unparalleled in the league for aerial ability and possess remarkable technique for a man of his size.

Eto'o alone has brought some much-needed publicity to the A-League, whilst Daniel Batty is the excitement factor. All eyes are on the pair, and everyone is wondering just how dominant they will be.
Login to Quote

Ziechael
5 years
Old versus young, should be an epic battle of the bulge-ing net

Obviously i'll be rooting for Eto'o to break a leg or something for you mate.
Login to Quote

Feliks
5 years
Ziechael Mate, Batty is half his age and twice his endeavor, he will win!
Login to Quote

The pre-season is now over, and what a pre-season it was. Apart from that expected heavy loss to Bayer Leverkusen, we were on fire and all thanks to one man- Daniel Batty. But let's look at the games in detail first.

First up was our Aspire program fixtures. Sydney University was first, and we dispatched them 5-0 thanks to braces from Ander Bergara and Daniel Batty along with a goal to Ali Abbas. We beat SASI by an even bigger scoreline, with a Batty hattrick, Dimitrijevic brace and Chianese strike giving us a 6-0 win. To round off the program was the AIS, who at least put up some fight as we won 6-1. Goalscorers were Petkovic, Dimitrijevic, Bergara and Batty along with 2 own goals.

The biggest fixture of the pre-season, a sold out blockbuster against Bayer Leverkusen, wasn't the best day as the Germans thrashed us 5-0.

Then we had 4 games in Sydney, starting with Fernhill. Courtesy of a Daniel Batty brace, we won 6-0 and then a first half hat trick from the 19 year old gave us a 3-0 win over APIA Leichhardt. Our next game against Cooma saw Bergara get the hat trick instead, although Batty did chip in for a 5-0 win. Our last game, against South Coast Wolves, saw yet another Batty brace- the perfect send-off.

Player Of The Pre-Season

One of the easiest decisions of my life. Daniel Batty was absolutely mindblowing in pre-season, scoring a phenomenal 14 goals in just 8 games. Scored in every game but Leverkusen, and also assisted 6. Average rating of 8.98 over 8 games. Unbelievable.
Login to Quote

Walter
5 years
Wow, incredible preseason! So tight in defence but ruthless in attack!
Login to Quote

It may not have been the greatest start, but we didn't do too badly. Definitely need an improvement however to defend our title. Let's have a look at the month that was.

We started the season with a fan day against Melbourne Heart, and we pleased the board when Daniel Batty scored early to send the fans into raptures. Rhyan Grant made it 2-0 just after half time, and when the Heart conceded a penalty Ander Bergara stepped up and easily scored. Francesco Stella got a consolation goal for Melbourne late in the game but we ran out 3-1 winners.

Our second game was just as important, the Sydney Derby against Western Sydney Wanderers. The game was a tight stalemate until just after half time, when Matthew Jurman got his second yellow for a rough challenge. The Wanderers managed to score twice to make us pay, and although Ander Bergara pulled one back in the 68th minute the Wanderers ran out 2-1 winners, thanks to Matthew Jurman.

The last game of the month was the Grand Final replay against Wellington Phoenix. The Kiwis drew first blood in the 26th minute, but Jack Batten won a mad scramble at the goal mouth just 7 minutes later, toepoking the equaliser. He then helped out immensely in defence as we held on to draw 1-1.

Certainly not the best start, but there's plenty of football left to play. We just have to take as many points as possible in the next few months to put some distance between us and the other teams.

Ander Bergara got off to a fine start, with the skilled Spaniard scoring twice and showing us his true ability. Hopefully he can stay uninjured and bedazzle the A-League!

Ziechael
5 years
There's a lot to be said or getting that first loss and first draw out of the way... maybe not in the first 3 matches though

Still, like you say, plenty to go and great to see Batty getting the goals already... (fond memories of David Batty)
Login to Quote

Defending premiers Sydney FC have been hit hard with the news that club stalwart Sebastian Ryall will miss 5-6 weeks with a hernia. The injury adds to a growing concern over a lack of depth in central defence, with Ryall and Jurman both missing for the next 2 matches and Ryall even longer. Aaron Calver and Pedj Bojic will have to replace the pair, but it is not just a temporary problem.

With the retirement of Sasa Ognenovski and the sale of Brendan Dragas, Lodovico was left with just 3 first team centre backs in Jurman, Ryall and Jack Batten. The financial situation at Sydney meant Lodovico couldn't bring anyone in, and now relies on Bojic and Calver to provide cover. Bojic is a natural right back whilst Calver is young and still developing, and it is a major concern for the Sky Blues to have so little depth.

The team will be hoping that they can bring someone in over the January transfer period, otherwise there may be some defensive concerns in the season ahead.
Login to Quote