Joe
6 years
Unlucky with some of the results, but going strong in Europe!
1
Login to Quote

This was a big improvement from the previous disappointing months. Made a few signings that I felt was necessary to cope with the upcoming fixtures, and to hopefully build the team for next season in which I'll push to ultimately win the Premier League. 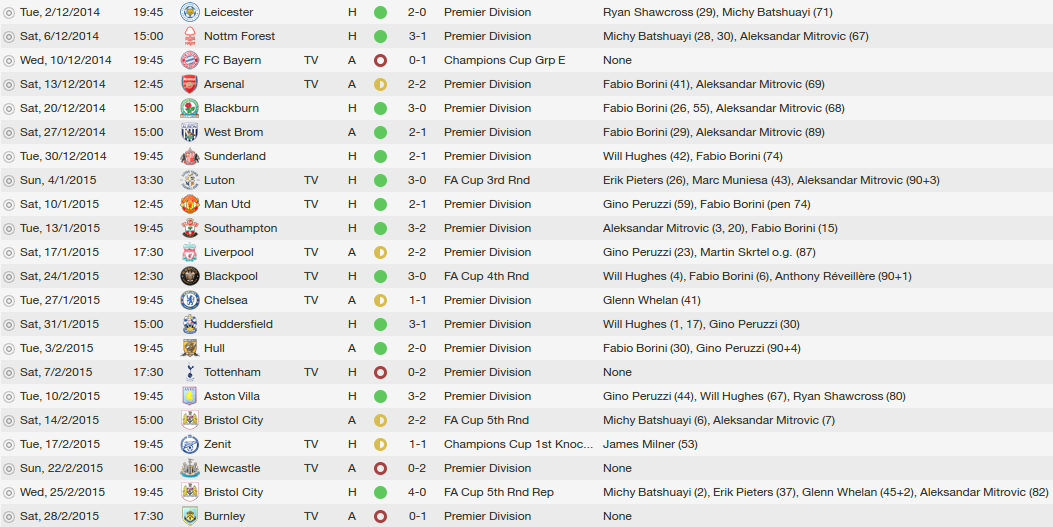 A great chain of results in the Premier League. Defeating Manchester United and Southampton is a huge morale booster as they were in the top 4 when we faced. Drawing with Arsenal, Chelsea and Liverpool was a good result too, considering they are the 3 of the biggest teams of the Premier League. The FA Cup is a successful campaign so far, as well. 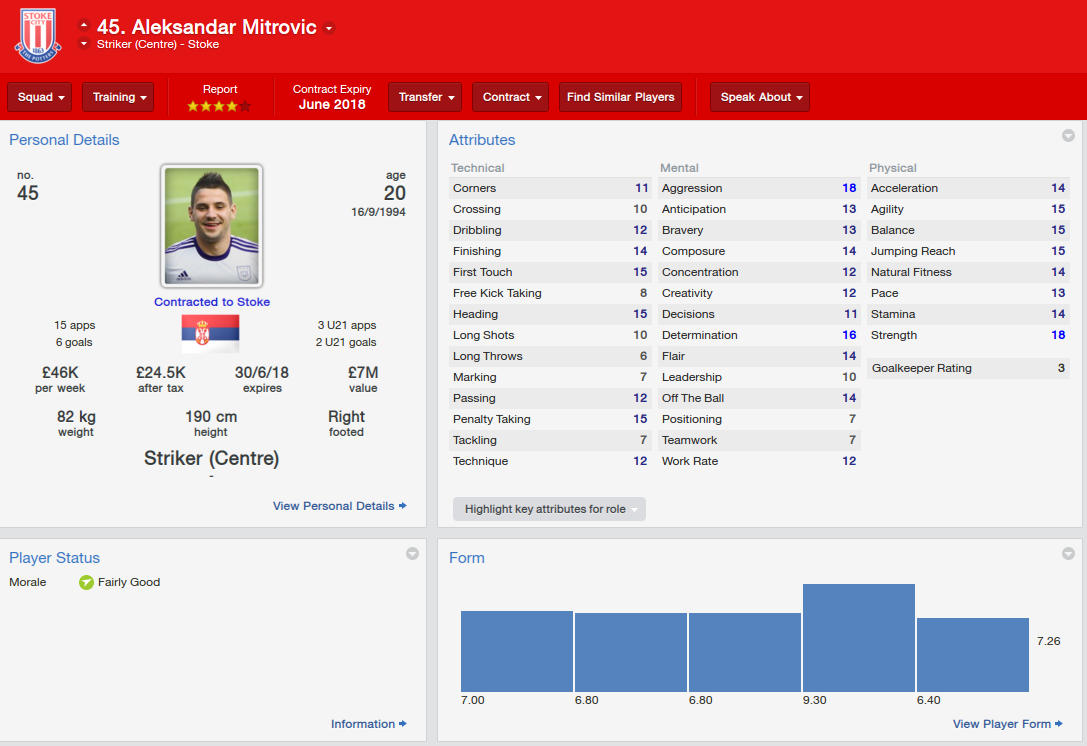 Mitrovic has come out of his shell lately. His striking partner Michy Batshuayi was injured for 6 weeks with a fractured wrist. This meant that Mitrovic and Borini had to get goals and they both succeeded, however Mitrovic assisted a lot of goals too. Overall, Mitrovic has been a key player in the team and has helped us get to the position in the league that we are currently. 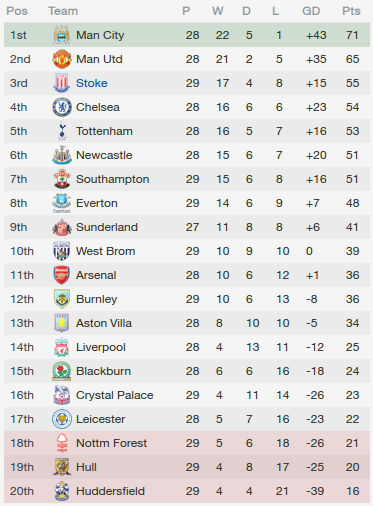 We are in a good position to retain a Champions League position this season however we don't know how the future fixtures will fair against us. Liverpool has risen last time since last report and Arsenal are still in a disappointing position, Wenger is in trouble as far as I know.
Login to Quote

Joe
6 years
Milner is good squad player, especially on a free. Mitrovic has been insane!
Login to Quote

Oz96
6 years
Spurs and Burley are your dark horses for this season, decent month results-wise. I loked the signings of Sakho and Ivanovic. Well written update!
Login to Quote

The drama that this month entailed was truly shocking. From the Champions League to the great rematch, except, for the FA Cup trophy and the closing curtains of the Premier Division. Overall, I think I honestly got the best out of my players this season, they were put to a big test with the added competitions and especially, the young talent, showed how much they're truly worth.

Reaching the Semi-Final of the Champions League exceeded huge expectations, I've received a fantastic praise from the boardroom. We got knocked off by Arsenal by away goals. We then went onto lose to Manchester United in the FA Cup Final. Finally, we were just a win away from being in the Champions League again, however we needed Tottenham to lose to Huddersfield and it didn't happen unfortunately.

Fabio Borini is key to the club's successes. He's had to adjust to the new striking teammates - Batshuyai and Mitrovic, this means playing him in a more attacking-midfielder role which isn't his natural position. He's supplied the ball to the new strikers well picking up a 75% pass completion. When he plays well, the team plays well and the team gets results. 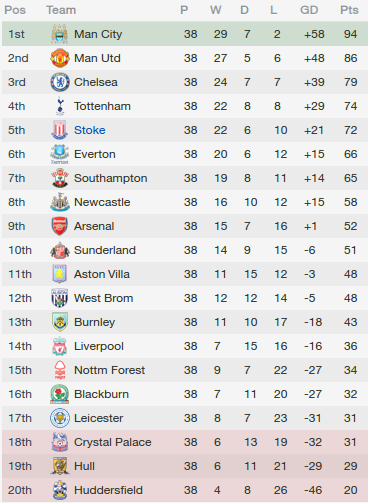 Manchester City has taken the title straight from local-rivals from Manchester United. 5th place isn't a horrible position to be in however, I know why we declined. We have to be optimistic and look at the possibilities. We will participate in the Euro Cup and.. We will win the Euro Cup.
Login to Quote

Joe
6 years
Really good season mate, so unlucky with the champions League...such a good performance this season and then u won't be in it.
Login to Quote

After a very stressful season for some and a very successful season for others. It was time for the award ceremony in which the individuals behind the success is given rewards and recognition for there hard work. How much fun! 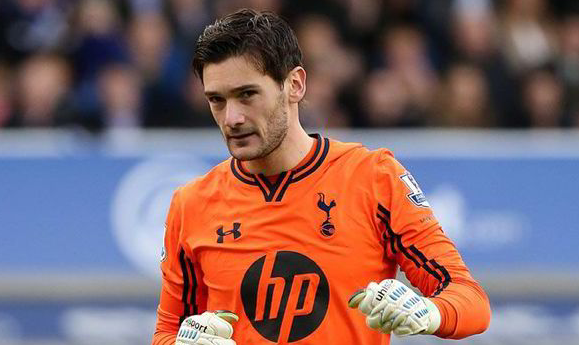 Hugo Lloris was one of the key elements that went into Tottenham's success this season. Qualifying for Champions League and winning the Capital One cup is not an easy task however, under new appointed manager - Marcelo Bielsa, he was able to get the best out of Lloris with only conceding 18 goals and keeping 20 clean sheets this season.

Player Of The Year

http://i.dailymail.co.uk/i/pix/2014/01/10/article-0-1A874AA100000578-286_634x435.jpg
Eden Hazard retained the title of being Player of the Year. Looking at the statistics, Hazard actually played worse, therefore making this win even more impressive. Scoring 9 less goals then last season (10 scored), assisting 19 goals, winning 7 MOTM and finally averaging a 7.28 rating. This player is phenomenal and is apparently being poached by Real Madrid and Barcelona.

Young Player Of The Year

http://www.fifa.com/mm/photo/tournament/competition/01/63/92/93/1639293_full-lnd.jpg
The argentinian defender has snagged the Young Player Of The Year with exceptional performances. Stoke's young signing this season, has proved more than what he's worth with scoring 7 goals and assisting 6 of them. Due to him having countless injuries this season, he only played 27 league games. He averaged a 7.52 rating, showing why he is the best attacking player in that position. Gino Peruzzi, is one for the future.

Manager Of The Year

http://cdn.images.express.co.uk/img/dynamic/67/590x/secondary/148215.jpg
Newly appointed manager Diego Simone took over a collapsing Manchester City and showed them why they are a superpower in the Premier League. The next challenge for Simone is to win the almighty Champions League, a competition in which he did not have the privilege of playing in last season. Diego Simone came from Atletico Madrid and has made his mark in Premier League history.

Team Of The Year 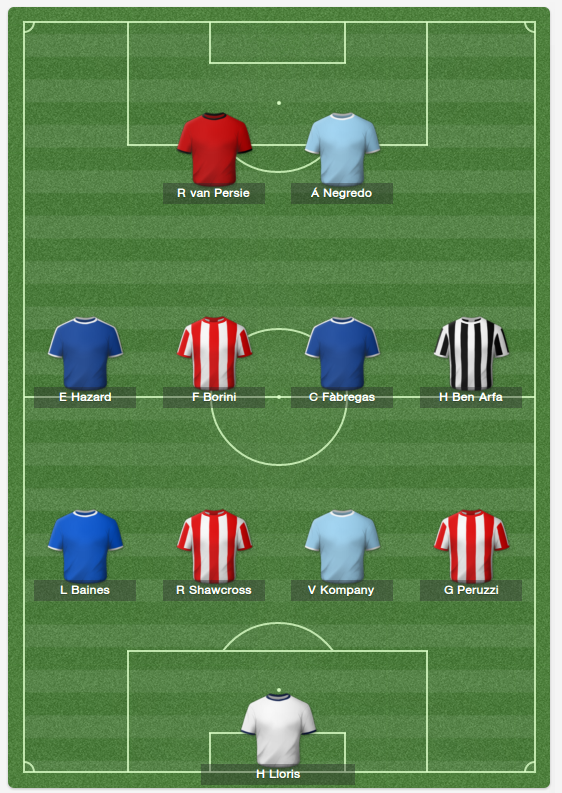 Oz96
6 years
You've done a great job this season despite declining in the league, too bad both FA cup and a spot in Champions League has slipped out of your hand. I liked the updates, keep it up!
1
Login to Quote

August has been good overall, in my opinion anyway. We signed some young players and we are still rusty however, the main goal is to win the Europa League. I'm not too bothered about the league, because I still don't think we have the potential to be the best yet. But we will still perform in the league as the best as we can.

Very few fixtures this season due to us not being in the Champions League. This will keep my players fit for Premier League and Europa League matches. Defeating QPR 4-0 is a great confidence booster, and it sends a message to other teams on what we are capable off. What I'm really hoping for, is for my younger players like Hughes, Mitrovic, Borini and Batshuayai to really develop and we will challenge for the title properly, next season. 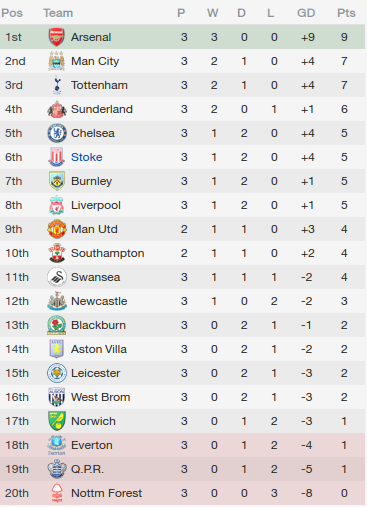 A decent pre-season apart from losing to a fellow Premier League team - Leicester 1-0. We toured the U.S.A for the 3rd year going and we were requested to tour Italy. The team has had a lot of mach practice and it's paid off fantastically, notably a 6-1 win against Seattle and a 3-0 win against Club Brugge. We won the City Cup which was created to get match practice against - a Premier League side, a Championship side and a tune-up game.

The Eurpoa League quest is very strong with this update. Dominating victories, we are really hitting the competition with a brute force. Conquering the Europa League and our excellent performances in the league, we look a real threat to any team right now.

As said in the introduction, we have obliterated teams in the our group in the Europa League and qualified for the 1st Knockout Round. We've defeated 3 of the biggest Premier League teams back to back - Arsenal, Chelsea and Manchester United. At the beginning of September, we got hammered 7-3 by Manchester City, but since then, we've been a force to be reckoned with. 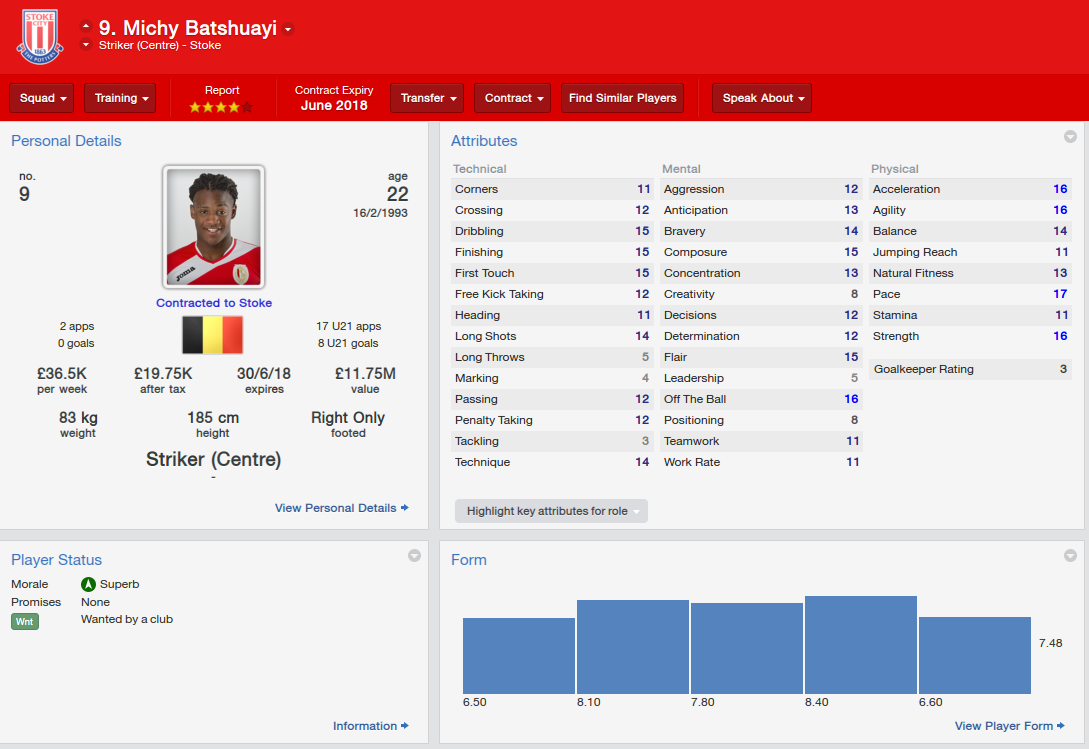 Michy wins the Key Player award again, two times in a row, first time ever. He has just been an unstoppable force, he's the 2nd top goal scorer in the league and the most assists in the league. He has attracted interest from Valencia and other foreign clubs around the world for his exceptional performances in continental competitions and in the Premier League. Of course, I must give credit to his striking partner Mitrovic, he's been setting up his goals nearly, just as much as he's been assisting Mitrovic's. Michy has more goals then Everton do. The partnership of Michy and Mitrovic has more goals then 2nd place Tottenham! Our undefeated streak has placed us 3rd place under Tottenham Hotspur after defeating Arsenal, Chelsea and Manchester United. Everton has been very disappointing this season finding themselves in 17th. Liverpool has improved significantly from last season in 9th. Rivals Sunderland has proven to not be a relegation side this season.
Login to Quote

Joe
6 years
Batshuayi doing brilliant, just like your last two months. What a game against City!
Login to Quote

Ducksworthh
6 years
Pushing for Champions League football this season? Looks like Batshuayi is quality, hope you can keep your form up.
Login to Quote

Qualifying for the Europa Cup 2nd Knockout Round was the biggest priority and unfortunately, we've had a bit of trouble with doing that. The Premier League was quite a mixed bag, some games we played fantastically, and some games we played absolute horribly. Our campaign in the FA Cup came to an abrupt end in only the 4th round. Since we won the FA Cup and Capital One, we've declined drastically in recent years. 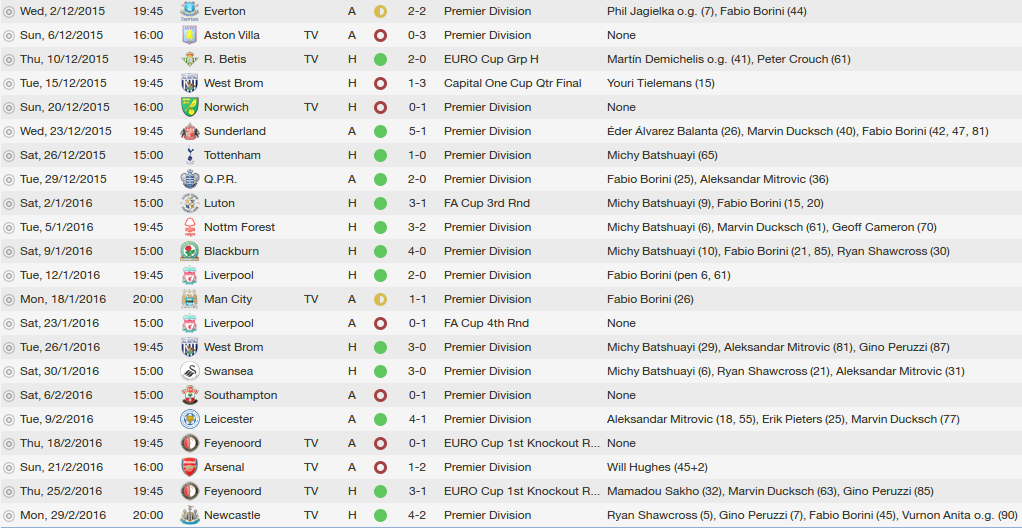 We had a great 7 win streak in all competitions, however, winning against teams we should be winning against. The only likely challenge would have been Liverpool, but we defeated them 2-0. We lost 1-0 in the first leg of the Europa League Knockout Stage, but we brought it back at home 3-1 to put us into the 2nd Knockout Round where we will meet Catania. We drew to Manchester City, which I actually consider a success due to us being focused on other things. 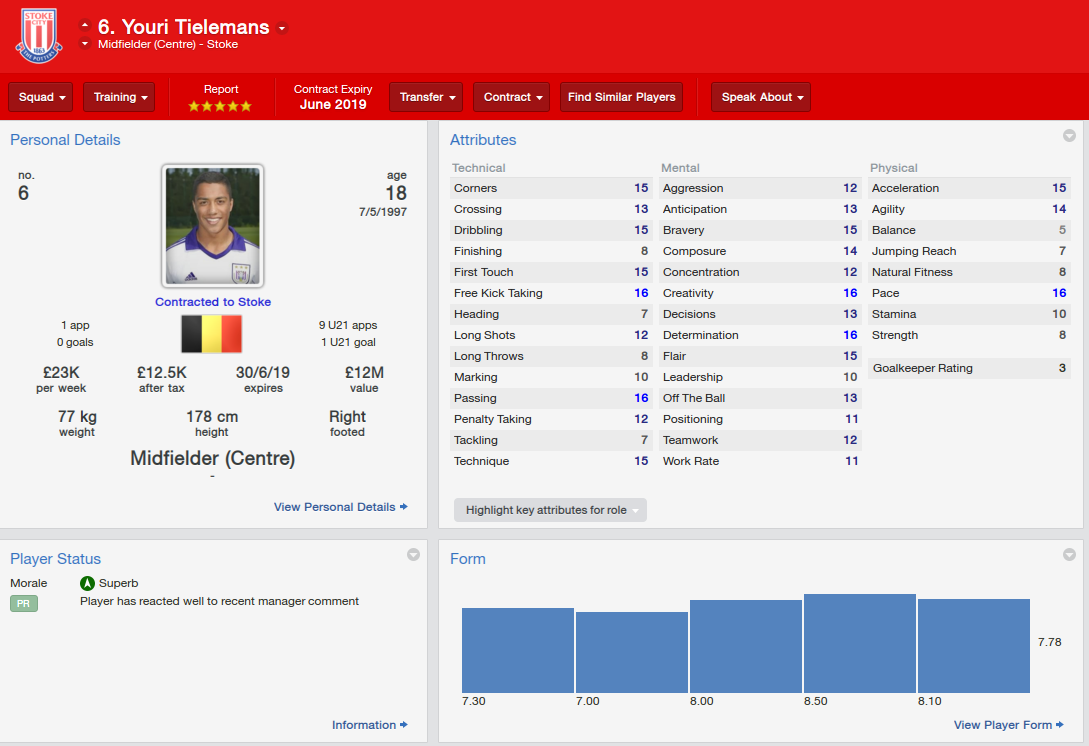 I was very unsure about this player when I purchased him in the Summer transfer window and barely played him. He had only 3 league appearances until December, I decided to give him a chance and I've never looked back. He's slotted into the midfield in a rotational methods featuring Will Hughes, James Milner, Youri Tielemans, Steve Sidwell and Geoff Cameron. Youri has retained the highest passing percentage of 84%. 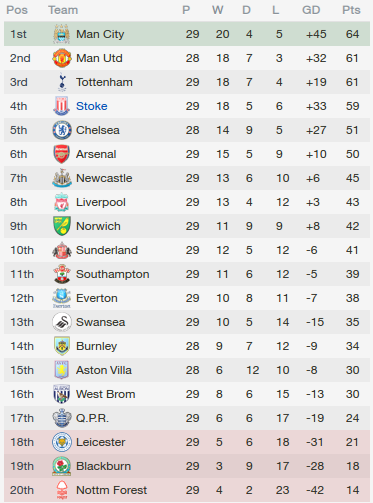 We are in a good position in getting Champions League football this season, meaning we would get more funds to compete for the title next season. It will be very unlikely that we don't qualify for Champions League as Chelsea are 8 points behind. Everton continue to be disappointing under manager Roberto Martinez.
Login to Quote