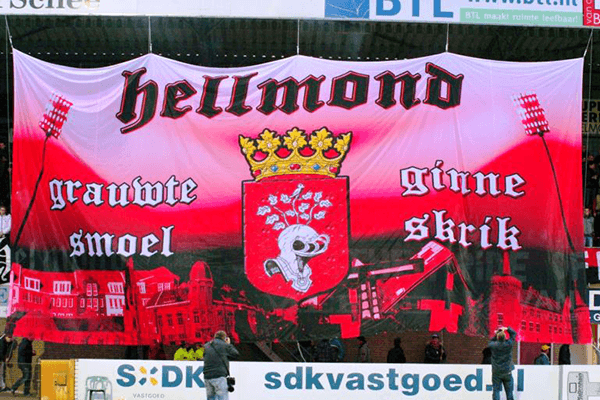 Wilfred Bouma, you’ve probably heard of him. He’s a former PSV, Aston Villa and Holland defender, but the reason I chose him as my persona this career, is because he was born in Helmond. In this career he will be managing my local team: Helmond Sport. I don’t have a real connection to them, as I’ve only went to their stadium once. But still, your hometown club is always something special, you have a connection to it no matter what.

So, something about the club, they’ve been in the Jupiler League for most of their history, and they’ve been in the Eredivisie for a total of two years, but that was a long time ago already, and lately they’ve been pushing for promotion every year, but in the play-offs it’s gone wrong for the club every time lately. Helmond played a KNVB Beker final once, in 1985, but after 90 minutes of football, FC Utrecht deservedly won the cup. After this, Helmond had some bad years, but as of late, they’ve been consistently knocking on the door of the Eredivisie.

Helmond Sport is not a club with a lot of money, so it’ll be a big challenge to get them promoted with these minimal funds available to me. I’ll have to find cheap players, players the club always seems to find. Although the club don’t have a great financial situation, their squad is pretty good, and they have some players with Eredivisie experience. In the media, Helmond are predicted to finish 9th, but I think I can lead the club to a higher position in the league.

The club play in the Lavans Stadion, a stadium with only three stands: one side is empty, and people can literally see the pitch when looking out of their top floor window. The small stadium can hold 4.200 people, and when I went there, there were about 3.000 people. This is the average attendance for a game, so the stadium is never really sold out, not even for big games. Surrounding the stadium are Helmond Sport’s training grounds, where the first team and youth teams train.

Although the stadium is never full, concrete plans are there to build a modern 8.000-seater arena a couple of miles from the old location. These plans haven’t been finalised yet, which is also down to the low average attendances the club currently has. I, however, plan to take Helmond to the Eredivisie, so I’ll most likely request an expansion or a new stadium along the way. 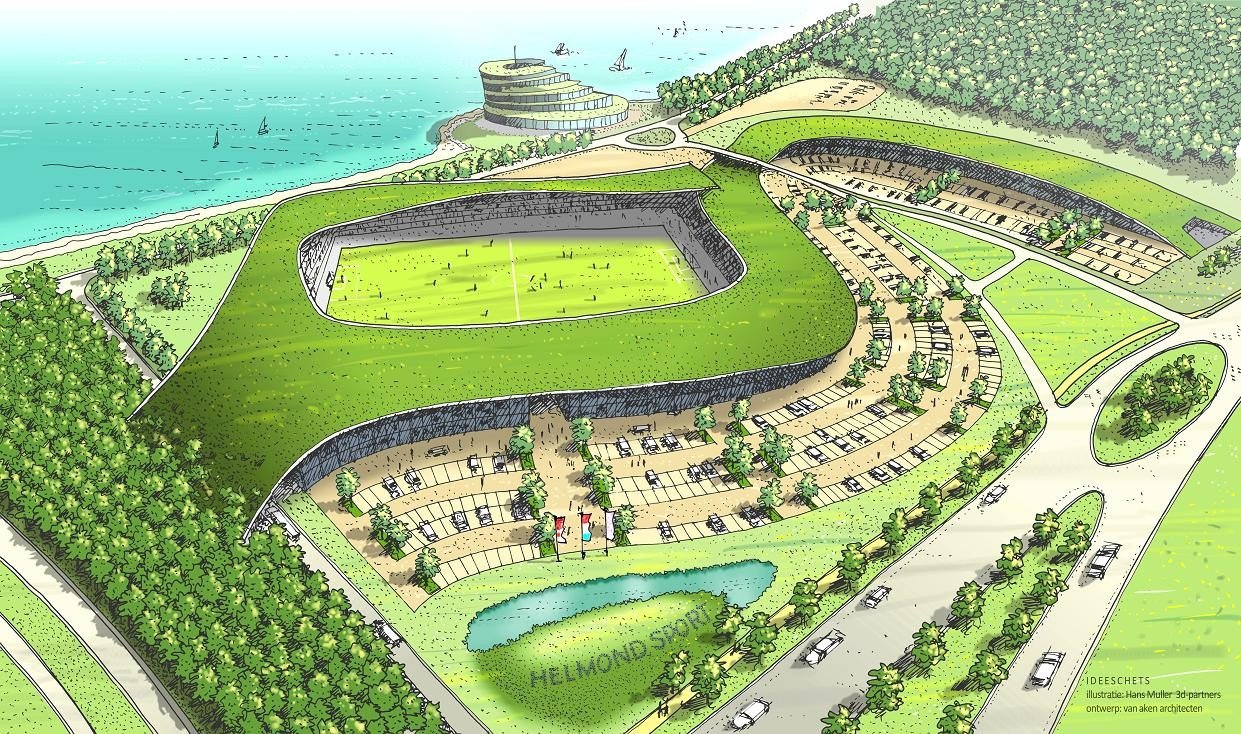 Drawings for the new stadium

This was a little introduction to Helmond Sport, the club I’m going to do a story with until FM15, hopefully. Updates will be first person as well as news articles, hope you all enjoy! Leave a comment if you do enjoy this story! I’m using pr0’s update which has been updated for the 20th of August. I do actually live in Helmond in real life by the way.
Login to Quote

Aaron
6 years
Ooooh, that's a nice stadium, I'd be on the banks every game watching for free! 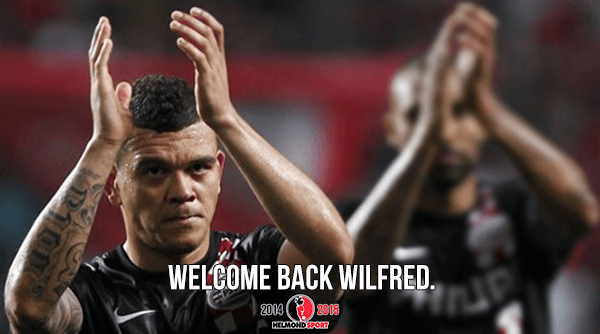 Today was a day of change for Helmond Sport: old manager Jan van Dijk, who took over from Eric Meijers halfway through last season, departed the club, and Helmond-born Wilfred Bouma was presented as the new manager. The crowd at the Lavans Stadion were enthusiastic about their new manager, as they praised him for his leadership off and on the pitch during his playing career. In this career, he played in the defence for clubs like PSV and Aston Villa. Besides this, he also played 37 international matches for Holland, in which he scored 1 goal.

Last season, Jan van Dijk led the team to a disappointing 13th place, which meant the team didn’t get to play in the promotion play-offs. After a period where Helmond Sport consistently finished in the top-five, this 13th place was very disappointing. Bouma now has the task to lead Helmond Sport to a new high finish in the league, but he’ll have almost no money to achieve this. Nonetheless, the former central defender was positive about his team’s chances: “I believe that we have a strong side as it is, and we might be able to sign the odd free agent here or there to strengthen the squad further. Also, I’m very happy to be back in my hometown, and I’d like to thank Helmond Sport for giving me an opportunity in the managerial world.”

Bouma can also rely on the strong link between Helmond Sport and VVV-Venlo for new players. The two clubs regularly loan out and sell players to each other, good examples being Ferry de Regt, Jeffrey Altheer and Guus Joppen. It is rumoured Helmond are preparing an offer for VVV starlet Selman Sevinç, a young Turkish midfielder. He can join Bouma’s equip for free, because he only has an amateur contract in Venlo.

Besides the new manager, Helmond Sport also presented the kits for the season 2014/15. These kits were again made by Masita, just like last season. The home kit features Helmond’s classical red-and-black design, but this time with two tones of red, this compliments the kit nicely. The away kit is plain white with red and black details added. No sponsor features on the kit. 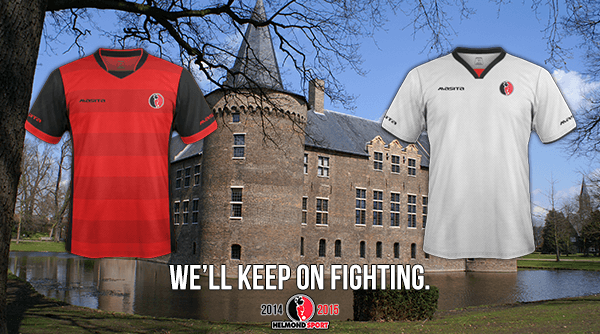 Tallery
6 years
Love the kits and the Graphics are great! Love the style!
Login to Quote 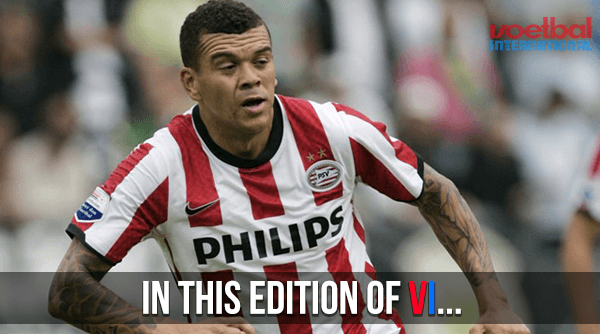 Hello Wilfred, thank you for taking the time to take this interview, we’re pleased to have you here.

No problems, I’m glad to be here.

Wilfred, you’re born in Helmond, is that why you chose Helmond Sport, or did the club approach you?

After I retired a couple of years back, I always wanted to become a manager, and this summer I followed the KNVB Managers Course together with people like Mark van Bommel and Ruud van Nistelrooy, so immediately after that I approached some clubs. One of which was Helmond Sport, and I a couple of days later got a mail back saying I could come to the stadium and take the job interview there. The club were happy such a big name wanted to join, and they were positive about my qualities.

Why did you decide to eventually join Helmond Sport and not another club?

To be fair, I didn’t get a lot of other offers, and because Helmond lies close to my heart, I decided to join Helmond Sport. This also means that I can move back to Helmond and visit my old friends again, I’m very glad to be able to see them again! I also think that Helmond Sport is a club which has a lot of potential, and I believe I can get this club promoted in the coming few years.

With the current financial state of the club in mind, do you think you’ll be able to get the club promoted this year?

I don’t think we’ll be able to finish first, but if we strengthen ourselves well enough we can definitely qualify for the play-offs. I know we have a strong affiliation with VVV, so we can exploit that and get some players in on loan, and as I said, we might pick up some free agents as well.

Is there any news on the new stadium?

I’ve met up with the board, and these plans have been put on hold for the moment, because of our financial position at the moment. Should we get promoted, the plans will probably be considered again. But for now, there aren’t any concrete plans to start working on the new stadium.

How is your relationship with the team and staff?

The players like me, the admire somebody with this much experience as a footballer. What they like most of all is my age: I can still play along when we play a 11v11 game in training sessions. I also have a good relationship with the staff, also because of the same reason. The board have full trust in me, and I have got enough time to mould and create the team how I like it.

We at VI wish Wilfred the best of luck at Helmond Sport, and hope he can bring the club glory!

New signing Marcel Meeuwis
New manager Wilfred Bouma has made one transfer so far, and as he indicated, this is a free transfer. The most notable free agent Helmond have signed is Marcel Meeuwis, this very experienced defensive midfielder (301 professional games) has played for the likes of Borussia Mönchengladbach, Melbourne Heart FC and Helmond Sport affiliate VVV-Venlo.

Meeuwis started his career at Willem II Tilburg, but he only played 6 matches in 8 seasons in Tilburg. Last season, the Dutch midfielder played for fellow Noord-Brabant team FC Eindhoven, but he played no matches that season. Now, Meeuwis has the chance to play matches in the Jupiler League at Helmond Sport. The defensive midfielder is regarded as Helmond’s best in that position, so it is expected that he will start almost every match.

Manager Wilfred Bouma was very pleased with his first signing of the transfer window: “Marcel is a player that every club needs: a leader on and off the pitch for the whole team, a player who can motivate the players and get them through difficult times. Besides that, Marcel is a very good player who has great qualities for this league. I think that he’d be a first-team player for almost every Jupiler League club, so it’s nice to have somebody like him on board for the season.”

Meeuwis himself was also at the press conference, and he was glad to have joined Helmond Sport: “Helmond Sport is a club which can really grow, in my opinion. Also, we have a great squad to do so, and I think we can qualify for the play-offs this season. When Wilfred Bouma approached me, I had no doubt and I immediately entered talks with the club, as Bouma was a great player for PSV and Aston Villa and I’m looking forward to working with him here in Helmond.” 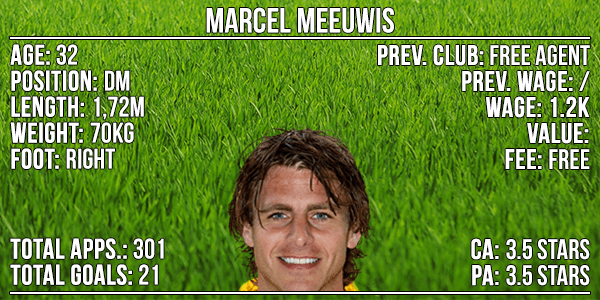 Also joining the club is striker Thijs Hendriks. The 27-year-old has joined from Achilles ’29, who made their Jupiler League debut last season. It was a debut to forget though, as the club finished last in the Jupiler League. Hendriks started his career at NEC, where he played only 4 matches, scoring one goal. After 2 seasons in the red-green shirt of NEC, he joined Achilles, who he has now left to join fellow Jupiler League club Helmond Sport.

At the press conference, manager Wilfred Bouma was happy with his signing: “Thijs won’t be a first team player every match, because we have Serhat (Koç), who is a young and talented player. But still, Hendriks will play a big role in the team, as he’s a good and solid striker who is very calm and composed in front of the goal. We only have a total of 2 strikers right now, and we will probably not buy another one, so Hendriks will get the opportunity to get some first team football here.” 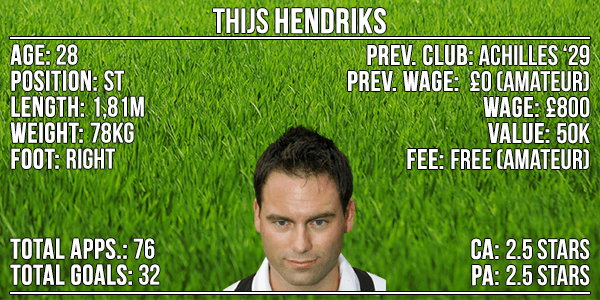 Leaving the club is back-up defensive midfielder and right-back Mees Siers, who has joined Eredivisie side SC Cambuur-Leeuwarden. The Dutch player was allowed to leave Helmond Sport because Bouma indicated he didn’t need him in the first team. Also, Siers was costing the club 1.2k in wages, which was too expensive for a rotational player. Bouma was pleased with the extra amount of wage money he had been allocated, and the 40k Cambuur paid for Siers. Siers himself was pleased with the move to the Eredivisie, something he didn’t see coming after his average season at Helmond Sport.

We’ll keep you updated on the transfers to come.
Login to Quote

Walter
6 years
Did Marcel Meeuwis happen to play for Melbourne Heart, who are now Melbourne City? Just interested as they're my hometown club