Tallery
5 years
Knowing your transfer wisdom, they are sure to be great signings!
Login to Quote 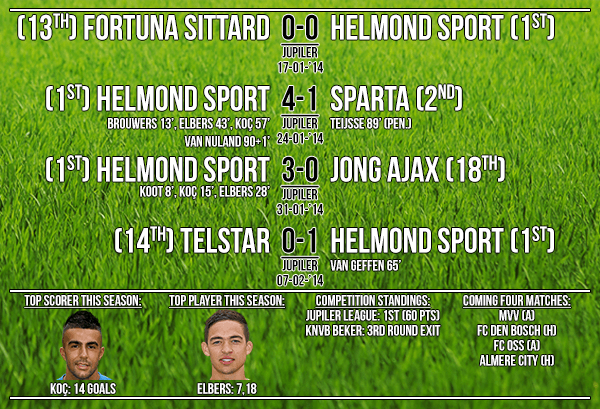 The four matches Helmond Sport have played.
Bouma’s View:
This was a very important run of matches for us, as one was the all-important clash at the top: Helmond Sport against Sparta. If we lost, Sparta would only be one point away, but if we won Sparta would be seven points away. So a win was absolutely vital. Before this big match, we first had to play mid-table Fortuna Sittard. But despite good chances, we didn’t manage to score, and a disappointing 0-0 was the result. We had enough chances to score, but we managed to fluff all of them. However, we played good football so I wasn’t at all worried for the match against Sparta.

We started off well against Sparta, in the clash between the two biggest title contenders, and Davy Brouwers put us ahead after only 13 minutes. The stadium was bustling, and I think this was one of the reasons we got off to a good start: the fans were behind us, and the atmosphere must’ve really sparked something for the players. Just before half-time, we scored a vital 2-0, that made my half-time team talk a lot easier. I sent the players out with clear minds, and told them that if we kept playing like this, we would win. The result was exactly what I expected: we stayed calm and we even scored the 3-0 after 57 minutes, Serhat Koç scored yet another goal for us. The match was sealed, but then our new right-back Daan Bovenberg committed a stupid foul, giving Sparta the opportunity to score a consolation goal from the spot, and they did: 3-1. In the last minute, we even managed to restore our three-goal lead, and this meant we won this very hard match easily, with 4-1. This meant we were top by 7 points.

A week after that great win, we played another home match, this time against the numbers 18 Jong Ajax. An easy match was expected, but I was aware that any complacency could lead to the unnecessary dropping of points. Luckily, we started off well, and the players overwhelmed Jong Ajax, leading to the 1-0 being scored after only eight minutes: Marc Koot, who has been vital for the team, with 11 assists, scored the goal. Koç scored the 2-0 only 7 minutes after the 1-0, and the 3-0 was then scored by Elbers in the 28th minute: I was surprised by how easily we were winning, and I was happy that we didn’t get complacent. The match ended in 3-0 as well, because the team played out the match calmly, saving up energy for the next match.

The last match was one against fellow Periodetitel winners Telstar, but their form dramatically dropped after winning the second period, and they were in a disappointing 14th place when we played them. Despite it being an away game, we were considered heavy favourites. We played a good first half, but we didn’t manage to score a goal. I was getting worried when we still hadn’t scored after sixty minutes, but luckily young midfielder Van Geffen eventually scored the relieving 1-0 in the 65th minute, and 1-0 was also the final score. It was a very pleasing run, as we got 10 points from the possible 12 points, and we only conceded one goal in total.

Player Spotlight:
In the spotlight is Marc Koot, together with Stanley Elbers two of Helmond’s most important players. Koot has thus far provided 11 assists, and another 2 were added to that the last four matches. He also scored a goal, an important one against Sparta.
Login to Quote

InvertedWingbacks
5 years
some good results there man, good to see you still top! another well-presented and well-written update!

Icarus
5 years
Really good results, lots of goals for you which is always a good thing! That Koc lad must be really prolific infront of goal

You're bound to get back in the Eredivise!
Login to Quote

Tallery
5 years
You are sure to win the league now, you must be really far ahead!
Login to Quote 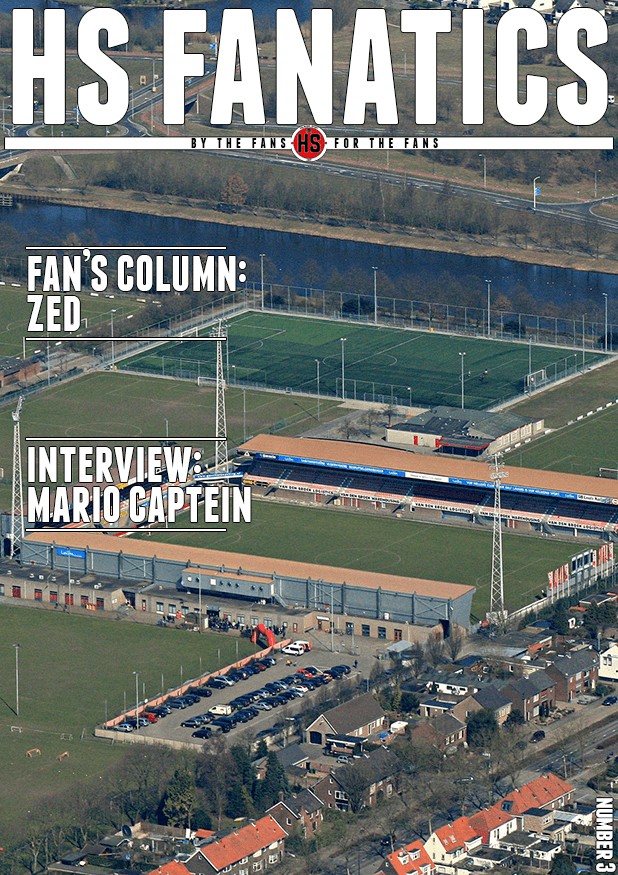 De Braak features on the cover of this HS Fanatics.
Welcome to part three of Helmond Sport’s very own club magazine. The people who’ve read our first two magazines have been very positive, so we hope to continue this standard in the next editions. Today, we interview Helmond Sport director of football Mario Captein, and we get the opinion of Zed, who will undoubtedly have almost nothing to complain about the club! 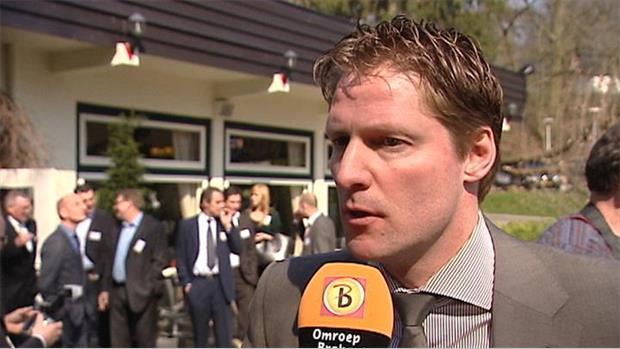 You’ve been the director of football here at Helmond for quite a time now, how have you experienced it?
I’ve really enjoyed life at Helmond Sport, as I enjoy challenges, and Helmond Sport certainly is a challenge. We don’t have a lot of money, and I have to search far and wide to find good players for the club most of the time, as we don’t have the money to buy any players, only free agents. I think I’ve done a good job so far, as some of the players we, me and my scouts, brought in, have been doing very well this season.

As you said, your club is doing very well, you must be pleased?
Yes, indeed, I’ve really enjoyed seeing the team play so well under the new manager Wilfred Bouma. I think appointing Bouma is the best decision I have ever made, together with the rest of the people in charge here. Wilfred is a very passionate manager, who knows what he’s doing. I think he can guide us to promotion this year if the team stay focused.

What are your impressions of Wilfred Bouma?
As I said, he’s showing great passion and enthusiasm in his way of working, something I think is great, as it also affects the players in a positive way. So far, the results have been great, and it’s really thanks to him we’re doing so well, I can assure you. He’s changed the way of working dramatically, and it’s worked really well. I think the reason he’s been so successful is down to him being only 36 years old, which means the age difference with the players is very small, and that helps him bringing across his message and his experiences.

Who has been the best player this season, in your opinion?
There’ve been quite a few stand-out players for us, but I’ve been most impressed with one of the league’s most underrated players: Wout van der Steen. He’s been a very solid keeper for us, only conceding 20 goals in 26 games, and keeping 13 clean sheets. In the field, Marc Koot has been the number one performer, in my opinion. He’s given a lot of assists and he’s also scored six goals. I think these players could easily play in the Eredivisie, and hopefully we’ll get to see them play there next season, for Helmond Sport!

What are your projects to help build the club further?
If we’re going to gain promotion this year, the first thing I want to push through is expanding the stadium a little bit, so that we have enough seats to satisfy the demand. Right now, our attendances are slowly increasing, and I think when we get into the Eredivisie, they will increase further, and we might sell out most matches, that’s why an expansion is necessary. In the long term, I think we should look to modernise and upgrade our youth facilities, as not a lot of youth players have come out of our academy recently, and that’s mostly down to the quite poor state of the facilities.

I’ve got to compliment the entire team and Wilfred Bouma for what they’ve achieved so far. Before the season, I, and many others, expected another season where we would eventually finish 5th, and then lose out in the play-offs, but I think nobody expected us to do so well in the league. With no real new faces, I didn’t have a lot of confidence in this year’s team, as last year’s team finished 13th with almost exactly the same squad.

But Bouma took the league by storm, and seemed to have sparked something, as we’re now top with 60 points, after 26 games. I can’t really name a match where we’ve been really bad, but I can name a few where we were outstanding. The match I’m most pleased with is the 4-1 home win to numbers two Sparta: there was a lot of pressure on the match, and the team responded by winning by a with three-goal-margin. Again, the team played great football and the fans I spoke to after the game were very positive about our chances of winning the league.

I, myself, am also getting more and more positive about promotion, but I do think the players will have to be very focused, as most of them have never experienced the feeling of being on the vergo of promotion. But the most important thing will be not to get complacent and think “we’ll easily win the title”, because that isn’t the case: Sparta is a strong team and I think they’ll be able to recover from the defeat against us.

Since the last edition of this magazine, quite a lot of games have been played, and some players have really impressed me in those games. Kevin Visser has recently taken over the position as defensive midfielder from Marcel Meeuwis, who wasn’t performing well. He hasn’t been absolutely outstanding, but he’s been very solid, not making any really bad mistakes, but also not scoring a lot of goals. All in all: a solid player in what I’ve seen from him here at Helmond. 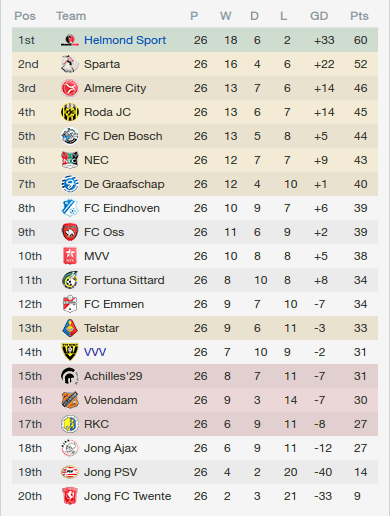 Icarus
5 years
ffs I love how well organized your udpates are, and your edited graphics are amongst the best on the site... Lovely work there Zed

Tallery
5 years
This is far too easy... leave and take up a challenge