FORM PICKS UP TO ROUND OFF AUGUST

http://i1.dailyrecord.co.uk/incoming/article2159098.ece/alternates/s2197/Hearts-trio-Danny-Wilson-left-Dylan-McGowan-centre-and-Brad-McKay-celebrate-at-full-time.jpg
-Hearts players celebrate moving on to the next round of the cup-

The games following the tough opening of the season were a lot easier and Hearts looked to round off August in a positive style. First up was an away trip to Raith Rovers which would end up with a disappointing defeat. The team were positive they could get a result today and battled hard, however it seemed not to be there day as they could only put the ball into the net on 1 occasion thanks to Adam Reach.

The club were then back at Tynecastle for a third match against Morton, this time in the League Cup. The club made it three wins out of three against them with a positive two goal victory and a clean sheet. Although it was a game that the team were always going to win, the manager would have been very pleased to see the team pass around the ball comfortably and not give away possession easily.

Hearts then managed to get their first 3 points at the hands of Falkirk. The team passed the ball round well, again, with confidence leaking from the Morton game and 2 goals in 10 minutes in the first half was enough to guarantee victory. With all the plus points that the club brought in this game, the manager spoke about the disappointment to concede a sloppy late goal to David Silva (no, not that one) and how the players should have killed the game off earlier. This will be surely a feature that he will bring up coming into the Challenge Cup 3rd round tie against Raith at the start of September. 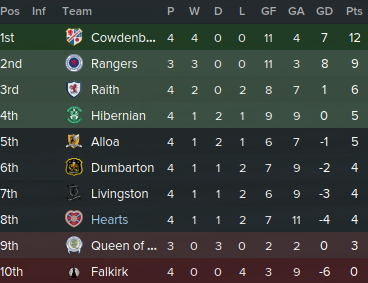 Cowdenbeath are currently top of the league, three points ahead of Rangers. However, if Rangers win their game in hand against Queen of the South then they will claim top spot on goal difference. A win for Rangers would also mean that Hearts would stay in 8th and 1 point ahead of QotS. The league is only 3 games old, so the league table really doesn't matter. However Hearts will feel that they really do need to start picking points up fast.
Login to Quote

Tallery
7 years
Good month, did you start on minus points though?
Login to Quote 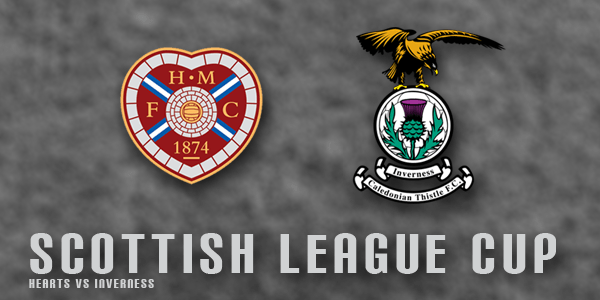 HEARTS PUSH INTO A PLAY-OFF SPOT

September has brought in a batch of good results at Hearts. The club have played well with victories in 3 of their 5 matches this month. James Keatings has shown the special touch we saw in pre-season and ended up winning the Championship Young Player of the Month.

This month started with an away trip to Raith Rovers in the Challenge Cup, a tie which would end up in disappointment. Despite hosting a major amount of possession and pushing very high up the pitch the maroons never looked like scoring and it was only a matter of time before a well executed counter from Raith snatched the victory away.

The Jambos recovered well soon after, on the road again, this time a trip to Dumbarton. James Keatings recovered his pre-season form and produced a very impressive display in which saw him claim the match ball. Hearts kept control of the match and Dumbarton were never really in the game, which would point towards Alexander's frustration towards the complacency shown to let them in for a consolation goal. Alexander stated that the team would work hard on ensuring the defence stay tight no matter what.

The defence stayed tight in their next game at home to high-flying Cowdenbeath. Even though their defence managed a clean sheet, Hearts weren't able to put a good enough attack to beat the Cowdenbeath defence and this left the manager infuriated on the touchline. Chance after chance was wasted and, even though he fielded a rested side, Alexander stated that it seemed to be 'one or the other' (Good defence or good attack) at Hearts.

Inverness are currently 2nd in the SPFL, 1 point behind Dundee, and beat Celtic earlier in the season. So you can see who was deemed as favourites coming into the League Cup 3rd Round. This was a game with a lot of chances and lots of attacking threat from both teams. Hearts played out of their skin and it seemed like they were going to produce a shock result in ordinary time when Osman Sow slotted away a penalty in the 80th minute, however Inverness struck back with 1 minute left of play to take the Jambos to Extra-Time. The game had to be decided on penalties, at the end and that finished 4-3 to Hearts. In the Quarter Final Hearts will play against none over than their fierce rivals Hibernian at Easter Road.

Hearts stepped out at Tynecastle to face Livingston 4 days later flowing with confidence from the Inverness victory, and this confidence proved brightly as they cruised to another 3 points. James Keatings put another goal to his tally 10 minutes in and the game looked comfortable from that point on, with Hearts dominating the majority of the ball. 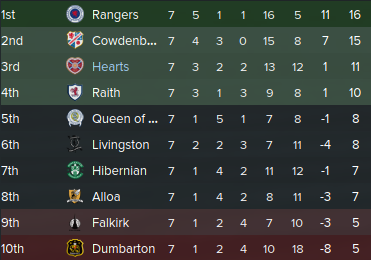 Hearts currently sit 3rd in the table, exactly were they are predicted to finish. They sit 5 points off Rangers, of whom already look comfortable. Currently in the play-offs along with Hearts are Raith and Cowdenbeath. 5th place Queen of the South are 2 points off a play-off spot and 3 off Hearts.
Login to Quote 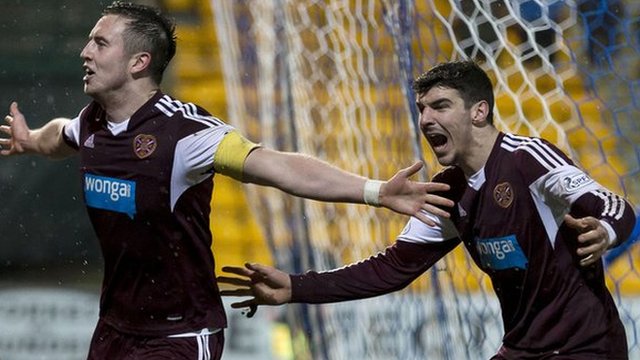 Hearts have continued the impressive form, of which carried them through the majority of September, along into October and have battled out an incredibly productive month ending with
Neil Alexander picking up Manager of the Month for the second month in a row.

October started with a trip to Palmerston Park to play against Queen of the South. Once again Hearts dominated possession and chances, a theme that seems to run through Neil Alexander's footballing philosophy. This time, however, a mix of potent attack and solid defending saw the club claim both a comfortable win and a clean sheet! Something the manager had been calling out for in recent press-conferences.

The next victory came on the road again, this time at Alloa Athletic. Keatings grabbed another 2 goals this time and, if he can grab a bit of consistency in his scoring, he might be on to a winner this season. Hearts passing has been improving every week, as is their whole performances. Alloa had a few meaningful attacks and managed to grab a lucky goal, but overall the defence were tight.

Dumbarton's journey to Tynecastle signaled the start of the second round of fixtures and Hearts managed to get off to a victorious start, extending their winning streak to 4 games and improving confidence and morale all the more. Captain and Centre-Back Danny Wilson somehow managed to grab a brace from the back in another impressive victory. Signs are showing that this season could be something special.

The winning streak came to an end, however the unbeaten streak remained strong when Hearts traveled to Easter Road for a first of 2 Edinburgh Derbies in 4 days. Their first match up was a league match that finished as a 1-1 draw. Hearts didn't play at their full potential this match and went 1-0 down for the first time in a long time. James Keatings was the hero and managed to grab the point for Hearts.

The next was more typical of a Hearts performance under Alexander. The team passed it round a Hibs team, who seemed like they just wanted to pack up and go home. Keatings scored again, this time in the 2nd minute, to get Hearts off to the best possible start and from that point on it was a slaughtering. A goal from loanee star Adam Reach and 2 from Osman Sow claimed the extreme bragging rights for the joyous army of maroon in the away stand. This result means that Hearts move into League Cup semi-final and optimism is growing heavy among the fans. 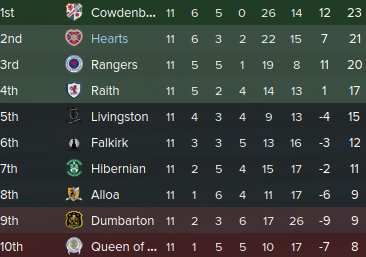 Hearts move up to 2nd place and 2 points off Cowdenbeath. Rangers have dropped off this month and now lie 1 point behind Hearts, who know have opened a 6 point gap over 5th place.
Login to Quote

Tallery
7 years
Great couple of updates Zap, love the detail, and top spot is a must
Login to Quote

Zap
7 years
Ipswich Knights: Thanks!
Tallery: Thanks mate. Oh, and don't worry, I will be gunning down Cowdenbeath with all my arms!
Login to Quote 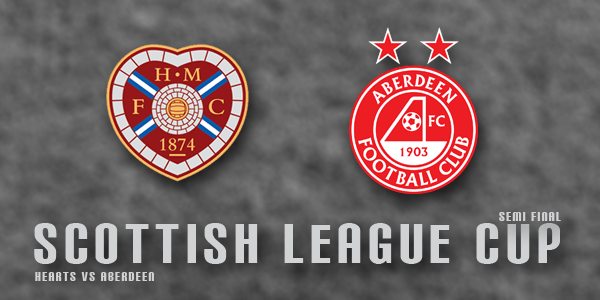 TVDLC123
7 years
Good start to the season, big stakes for that semi-final!
Login to Quote

Tallery
7 years
Nice graphic, even if I do say so my self

pompeyblue
7 years
Some really impressive updates, Zap!
Your monthly updates are very neat, and detailed too. Good luck in the semi-final, it should be a great game.

Aaron
7 years
Personally I think you should be top.

Good luck in the semis mate!

Zap
7 years
TV: It's been good so far but we'll have to keep it up and that is the challenge. As far the Semi-Final, I really don't mind getting knocked out by a team like Aberdeen but I won't be happy if we don't push them.
Tallery: It's a really nice graphic, forgot who made it though...

Pompey: Thanks and I'm hoping it will be!
Aaron: It's a shame we're not but we will be giving it all to jump ahead of Cowdenbeath.
Login to Quote