Tallery
7 years
Great updates Zap, hope you get back to the Premiership ASAP!
Login to Quote

Hearts have brought in a highly experienced footballer in Papa Bouba Diop, he will be able to help the young squad to develop and will add depth Alexander's midfield. Diop played for 9 teams in 6 different leagues before joining Hearts, from Grasshoppers in the Swiss Super League, to Fulham and Portsmouth in the English Premier League.

"Diop is a very talented, and very experienced member of our squad," Alexander explained at the unveiling of his transfer. "I am happy to have the opportunity to welcome him to the club and I hope that, not only will he be able to do a job for us on the pitch, but can help us off the pitch too. I will be making use of his knowledge and experience and I will want him to teach a thing or two to the younger players that we have."

Alexander's second singing is that off young Englishman Adam Reach, on a season long loan deal from Middlesbrough. Adam Reach is a strong and pacey winger and will provide contest down the left side of the pitch. The loan deal will cost Hearts £14,500 per month, the deal will also his wages being payed in full by the club and he may be recalled at any time.

"He [Reach] has a lot of talent. I have watched him play and he excites me, he has a bright future. Hopefully he can unleash his talent for us. He is very physical and I like that about wingers, I believe that he will be crucial to our season."

As a club that have only recently exited administration Alexander will have to tread carefully with any money that he is given to spend and will need to use it wisely if he is to keep the finances growing, and with friendlies coming up thick and fast it looks as if there will not be much more transfers heading into Tynecastle.
Login to Quote

Jord_Le22
7 years
Good read mate, will be following this.
Login to Quote

Hearts have had a tremendous first pre-season under the reign of Neil Alexander. The team have managed to push through their 5 friendlies, winning 4 and drawing 1. Not only have they won games but they have played impressively in them. The defence has been the highlight off the pre-season and held together incredibly well, only leaking in 3 goals. They got off to a fantastic start, thrashing their own under 20 side 5-0. The strike partnership off Keatings and Carrick proved lethal as they shared 4 goals between them.

The travel away to League 1 Morton for their second game of pre-season proved fruitfull as the team smashed their way to another large victory and clean sheet. Keatings put in a fantastic performance and grabbed a hat-trick this time, staking his claim early on for a first team place.

Another impressive victory and clean sheet came once again away at another League 1 side in Stirling Albion. James Keatings scored once again to put his goal ratio on 2 goals a game, however, new loan star Adam Reach stole the show as he banged in a brace to claim Man of the Match.

A tougher challenge was thrown up next as Hearts welcomed Ligue 2 side Troyes to Tynecastle. Troyes went ahead early on but Hearts managed to claw back and scraped a victory thanks to 2 goals in 3 minutes from Sam Nicholson.

Then came the big game and climax of pre-season, a home game over Barclay's Premier League giants Tottenham Hotspur. A packed Tynecastle saw Hearts put in a very spirited performance against Spurs. The club initially went ahead through another Sam Nicholson goal however Spurs dominated the game and scored 2 before Jamie Walker wriggled his way past new Spurs boy Nathaniel Clyne and rocketed the ball into the top corner, out of the reach of Lloris to send the Hearts faithful home feeling very optimistic about the upcoming season.

Celtic trainee James Keatings posted a hugely promising pre-season. Keatings was lethal in-front of goal and even when he wasn't scoring he was still contributing massively towards the attacking movements we created. James has to be the first name on the team-sheet for Hearts' first game of the season, a Challenge Cup first round game against Clyde at Tynecastle.
Login to Quote

Looking forward towards the first season of the post-administration season Hearts have released their new Kits for the 2014/15 season, both of which feature no sponsor. The new kits will go on sale immediately on HeartsDirect and will cost £45 in mens sizes and £35 in kids sizes.

The Home kit is a classic plain maroon shirt featuring a white adidas logo, three white stripes trailing down the shoulders and a large white collar. What's special about this kit is the special logo honoring the 1914-15 team whom where called up to fight in World War I.

The Away Kit provides a very popular light blue and white striped design. The shirt will feature a central, black adidas logo and three blacks stripes trailing down the shoulders. The kit will also feature the badge of the 'Foundation of Hearts' which is the fan ownership group who will take over the club in the future. 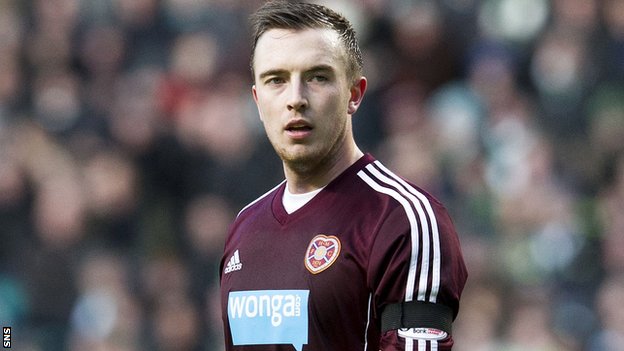 Hearts fans will be recoiling in horror today as news off skipper Danny Wilson's unhappiness has broke out to the media. The 22 year old has been at the club for 3 seasons now and has impressed. This morning Danny spoke to the press about his craving for top flight football:
"I want to be playing at the top, I don't want to be stuck in the second division. " Spoke a passionate Wilson to press. "I feel like I will not be challenged enough in this division and I know that I am wanted at bigger clubs. As much as I love the club they can't offer me enough..."

There is sufficient interest around Danny Wilson's situation with Dundee United, Rangers and Inverness all monitoring his situation. But, it is apparent that Danny is well-loved by the fans and team-mates, losing a player like him would hit the club hard.

"I have had a talk with the gaffer and he seems annoyed about my thoughts. He promised me top-flight football next season, however I don't know if I want to spend this season in the second division."
Login to Quote

) and a bit of transfer drama. Nice updates ZapdosTheGreat!
Login to Quote

MIXED START FOR THE MAROONS

The season couldn't have got off any tougher, in terms of the league, with two of their biggest promotion rivals coming up as their first two games. Separating these games, however, were Challenge Cup games in which Hearts managed to show up to their full potential against teams they were thoroughly expecting to beat.

Their first competitive game was pitted up against League 2 side Clyde. Hearts dominated the game from defence to attack as the team put in a ruthless display, Reach would have been glad to make a name for himself by scoring on his competitive debut and man of the pre-season Keatings grabbed a goal aswell to put the Jambos into the next round. A tie which will involve a journey to Morton.

The league campaign swiftly started and an away trip to Ibrox wouldn't have been at the top of any fans lists of games to start the campaign off with. Rangers managed to turn over Hearts and new manager Neil Alexander got to see, early on, how his team could cope after a thrashing. No Hearts player caught the eye. Alim Ozturk also couldn't have got off to a worse start as he saw red in the first half which undoubtedly added to, what was already by that point, a miserable opening day.

A chance to redeem themselves came up next as they traveled back to League 1 side Morton in the second round of the Challenge Cup. Hearts traveled to Morton for a friendly in the summer and manage to score 4. This is a feat that they managed to achieve again, helped by Sam Nicholson's 2 goals in 10 minutes. Hearts fans will believe they have a high chance of winning the competition and a Quarter-Final draw against fellow Championship team Raith Rovers are what stand in their way of the Semi's.

Then the first Edinburgh derby popped up at Tynecastle and support was booming for the Maroons. However despite dominating the early stages of the game they managed to concede an early goal. From that point on Hearts were always chasing Hibs on the scoreline but seemed to be dominating on the pitch. Going into the last 5 minutes it seemed as if Hibs had settled back and were looking comfortable for their victory until Osman Sow managed to thunderbolt a rocket of a shot from 25 yards out into the postage stamp in the top corner of the net to send Tynecastle into raptures. The team then pushed on for the last few minutes but were unable to grab a winner.


Right now, 2 games into the season, the league table really really really doesn't matter. But, if you really want to know then I guess I'l tell you the basics. Hearts were sitting in 9th position, picking up 1 point out of a possible 6. Rangers were sitting pretty at the top of the table.
Login to Quote

WILSON: "I AM STAYING"

The Wilson situation has took a new turn today as the Hearts captain has decided he plans to stay on at Tynecastle. A few weeks ago Wilson spoke out about his unhappiness at the level of football the club were currently playing at. However, at a press-conference this morning, the 22 year-old centre-back has told the Scottish press that he has decided that he will stay on and fight for promotion back up to the club.

"I have made a decision in the last few day about my future" spoke out Wilson. "I have decided I want to stay on at the club. I spoke with the gaffer a few times and he has helped me realise how much the club needs me and how much everyone wants me to stay."

Fans will be relieved about the news that has came out today, however the club need to act on as Wilson is on the last year of his contract and if a good offer comes in from another team then the club may lose him for nothing.
Login to Quote

walkinshaw
7 years
Good news he's a gun defender still on fm so will be key in your return to the SPL.
Login to Quote

Zap
7 years
Walter: The kit's are sexy now come on, and thanks!
Walkinshaw: He's a top defender for us and i'm glad he's chose to stay.
Login to Quote

Justice
7 years
It's good to see Wilson is staying, that must be a massive confidence boost!
Login to Quote

Zap
7 years
Justice: Oh it is. The lads are really glad he's staying.
Login to Quote