Villarreal CF was founded as Villarreal CD on 10 March 1923 "to promote all sports especially football." The stadium was rented for 60 pesetas a month and ticket prices were set at half a peseta for men and a quarter of a peseta for children. Women were granted free admission. On 17 June 1923, CD Castellón, a modern rival of the club, played the first match against a club named after Cervantes. On 21 October of that year, Villarreal played their first game ever, playing against Castellón. Villarreal started off with a kit of white shirts and black shorts, reflected in their first badge.

Villarreal's Primera Liga debut started with a match against then European champions Real Madrid in the Santiago Bernabéu on 31 August 1998. The first home game was against Celta de Vigo the week after. Because of a difficult season, Villarreal were relegated to the Segunda División for the 1999–2000 season. By finishing third, they were then promoted back to the Primera Liga.

Villarreal has supported a long rivalry with CD Castellón for geographical reasons, since both are from the province of Castellón. They also rival Valencia CF, since the two had been the most competitive teams of the Valencian Community; this clash is called the "Derby de la Comunitat."

The stadium has a capacity of 24,890, a figure which is half the population of the city of Villarreal. There is a statue of a yellow submarine outside the stadium to represent the club's nickname, El Submarino Amarillo.

A modest football club, based in a small municipality of Castellón, in the northern region of the Valencian Community. The club's home games attract mostly sell-out crowds, which equate to approximately half of the population of the city. The club's following is strong, but small, dwarfed by neighbouring giants Valencia to the south. Castellón also shares a border with the region of Catalonia, where Spain's most widely supported football club, FC Barcelona, are based. A domineering force who effortlessly attract supporters from all corners of the country - and the world!

Villarreal has experienced a mixture of successes in their meagre 16 year top flight stretch, including a Champions League semi final defeat to Arsenal, two Europa League semi finals, a 2nd placed finish under Manuel Pellegrini, as well as two relegations quickly followed up by immediate promotions.

The club have lofty ambitions, but are currently without a head coach. 2014/2015 is prove to be an uncertain and exciting time for El Submarino Amarillo.
Login to Quote

Jamesg237
5 years
A great first post sharing a lot about a club that I know very little about personally. Good luck for the upcoming season.
1
Login to Quote 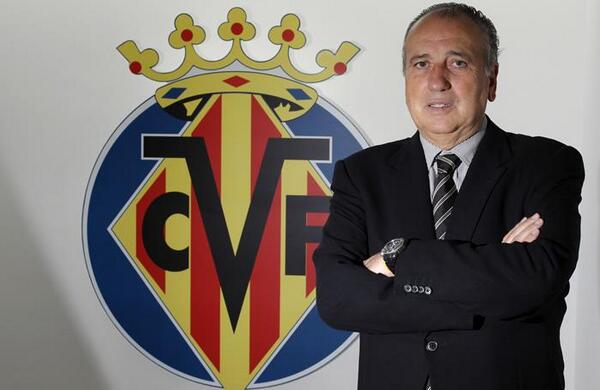 "We can conquer!" - Alfonso


With no major trophy to boast, Villareal's club president, Fernando Roig Alfonso, has insisted that the club must look beyond stability and set its sights on major honours.

"The club is stable, profitable and safe. But there is no trophy for stability. It is not an achievement. It is the bare minimum." Alfonso told Marca.

"The supporters are loyal and passionate. They have experienced a vast array of emotions whilst wearing our famous yellow shirt. They don't care about the club's balance sheets, understandably. They want success, parades, trophies."

"We want to deliver success. We want every man in our ranks to have the same ambition to the clubs who play in the Champions League and the clubs who have well stocked trophy cabinets."

"Of course they can be conquered" Alfonso claimed. "Look at the tremendous and admirable work that Diego Simeone has done with Atletico. He wrestled the league title away from the giants. He was minutes away from a historic and unprecedented Champions League win as well."

"Football is simple. When all the money is spent, it boils down to 11 men versus 11 men. It is no perfect science. Any team can beat any team. We need everyone to believe in that. We can be winners."

With Marcelino García Toral (above) relieved of his duties as Villarreal boss at the close of the 2013/2014 season, the head coach position is currently vacant, and Alfonso has vowed not to rush into a decision.

"We have a plan, with numerous avenues to be explored. We will take as much time as we can to make sure the right man to take club forward is recruited." Alfonso explained.

"The head coach will be installed before the start of pre-season, of that I am certain."
Login to Quote

"Pellegrini on the verge of sack" - Balague.


Sky Sports' Guillem Balague has claimed that Manchester City manager Manuel Pellegrini is on the brink of being relieved of his duties at the Premier League Champions, despite delivering the league title in his first season, according to reports in Spain.

The 61 year old succeeded Roberto Mancini on 14th June 2013, but Balague believes that the Chilean doesn't have the belief of the dressing room or Manchester City owner, Sheikh Mansour.

"He returned the league title back to the blue side of Manchester, but there is a lack of belief surrounding Manuel Pellegrini." Balague claimed.

"It was concerning to Manchester City that the title was won due to a calamitous collapse from Liverpool. Their failure in Europe remains a major issue. The supporters believe a squad as powerful as theirs should prosper in Europe."

Spanish based newspaper Marca are reportedly linking Manuel Pellegrini to a sensational return to Villarreal, who are currently without a manager. 'The Engineer' enjoyed 5 years at the Valencian club, steering Villarreal to an impressive 2nd place finish in La Liga.

"I don't believe Pellegrini is in line to return to Villarreal, but the rumours of Pep Guardiola to Manchester City seem to be gaining momentum." Balague added.

"We will see. It is a few weeks until the season starts. There is likely to be a lot of movement between now and then."
Login to Quote

Walter
5 years
I really like Villareal and this story, from the first few updates, promises to be a great story with them


Manchester City have sacked manager Manuel Pellegrini only 3 weeks after winning the Premier League title on the final day of the season.

The club have remained tight lipped and have not released any clarification for Pellegrini's sacking, but it has been rumoured that the dressing room had began to revolt against the 61 year old late into the title winning season.

Pellegrini impressively won 44 of his 60 games in charge at Manchester City, but it was debatably the club's continued failure in the Champions League which forced the club into exploring other options.

"It is concerning for the longevity of elite football managers that a globally renowned coach can win the Premier League title whilst scoring over 100 goals in the process and not be deemed good enough to continue in the post." Bevan claimed.

Manchester City and Manuel Pellegrini have refused to comment at this time, but reports are linking Manuel Pellegrini with a return to La Liga. The bookmakers are also slashing odds on Pep Guardiola extending his managerial reign to the Premier League and taking over the newly crowned Champions.
Login to Quote

Verdinho
5 years
I wonder who's coming back to El Madrigal

Could it be a red herring though?

Jonaldinho
5 years
Assuming Pellegrini will become the manager of Villareal in this career, that's a brilliant choice.
1
Login to Quote


Villarreal have announced that former Spanish International Marcos Senna is in line to succeed Marcelino García Toral who was recently dismissed as the club’s head coach.

Senna, 38, is set to be unveiled by the club tomorrow morning, and promptly take charge of Villarreal’s summer training camp in the coming days.

It was widely speculated that former Manchester City head coach Manuel Pellegrini was set to be brought back to the El Madrigal, though it appears no approach has been made for the vacant Chilean for the managerial position.

Club president Fernando Roig Alfonso stated that Marcos Senna is “categorically the correct man for now and the future”.

“His time here is well remembered. He is loved. What made the decision so special is that Marcos wanted this as well.” Alfonso added.

“I was adamant that the man we chose had to want this. We didn’t want to be anyone’s second or third choice. Marcos was so eager to return. His blood runs yellow.” Marcos Senna announced his impromptu retirement from professional football just 3 weeks ago after a short stint with the newly reformed New York Cosmos. The Brazilian-born midfielder claimed fatigue and fitness had begun to hinder his recovery and performance.

“It was the right time to bow out” Senna told ESPN3, where he announced his retirement.

“I could feel it in my knees, my ankles, my back. I couldn’t recover in time for the next game. I would play 60 minutes at the weekend, and then sit out of training all week. I love the game, but it’s hard to love the game when I’m healing 6 days a week instead of training”.

“I still want to be involved. Football is life.”

Marcos Senna will meet the press tomorrow as he unveiled as Villarreal head coach.
Login to Quote

pompeyblue
5 years
A very good start to the story mate, I wish you the best of luck with Villarreal!

Marcos Senna press conference is this afternoon. The rumours are hotting up. My reliable links at the club aren't answering their phones, but Twitter has exploded:

I hope Balague is wrong. A doubled-up management is recipe for disaster. It has taken the club so long to instill stability since Pellegrini's last departure. This would bring the walls tumbling down again.

Pellegrini left us for the bright lights of Madrid and left us stranded. Do we want him back in any capacity? The job should belong to Marcos Senna, and only him.

Josh_MU
5 years
Some great updates on show here pal! Keep it up!
1
Login to Quote

You are reading "Villarreal C.F - The Yellow Submarine.".