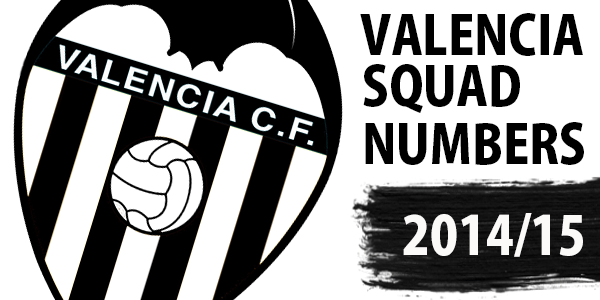 Today, Valencia have announced the reshuffle of squad numbers for the upcoming campaign. Many of the players have seen the numbers that they wear change compared to the previous seasons. However, this has angered many fans that have purchased this seasons jersey’s already. Several fans wrote on Twitter about their fury at the changes.

The changes include captain Dani Parejo taking the number eight shirt, changing from ten, who is now worn by Paco Alcácer. The number eight shirt also had a previous owner, in the shape of Feghouli, who now wears the number seven shirt, taking it from Álvaro Negredo, who is still out with a broken foot, which he sustained while at Manchester City last season. Negredo will now wear the number nine shirt, taking that from Alcácer.

Other high profile switches include José Gayá’s switch from number thirty-one to three, signalling that he will be Sabella’s number one left back, as he was during preseason, playing all five games and impressing the Argentine with mature performances, despite being 19. The number three shirt was previously by Portuguese Rúben Vezo, who did not make a single appearance during the preseason campaign.

Summer signing Nicolás Otamendi has been assigned number sixteen, having previously not been given a number. Loan player Rodrigo has been given the number eleven shirt, which previously belonged to Argentine Pablo Piatti, who has not had a new number assigned and left out of the squad for this seasons league campaign, hinting a move could be on the cards for the winger after a less than impressive preseason.

However, some players have had their numbers stay the same. 20 year old Rodrigo De Paul has retained his number twenty shirt, while Diego Alves has kept his number one shirt, showing that Sabella has full trust in the man between the sticks. Yeol has also kept his squad number, donning the number thirteen shirt for the coming season. Jack
8 years
Loving that graphic, and that you can put so much detail into such a small matter, great work

Denzy
8 years
I want a refund on my Rodrigo shirt please, Thanks :p
Login to Quote

AlexTHFC
8 years
Fantastic graphic and update, although that's what I expect from someone as talented as you.

@Alex - Awwww, you are so kind
Login to Quote 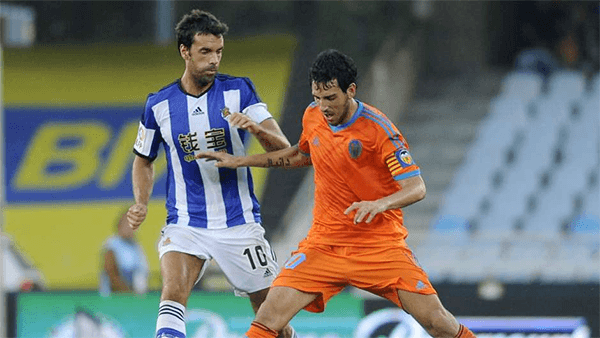 Valencia captain and midfielder has reportedly taken keen interest in a move to Inter Milan. The Valencian servant has reportedly asked new boss Alejandro Sabella to take notice of a bid, if one is made.

However, Sabella in his most recent press conference, he shot down the rumours and the chance of his captain leaving the club.

“The rumours are all made up, and my player is deluded to think that they are true. They were made up my MARCA, a really reliable source. I will not let Dani leave, no way. I need him, and whatever he says to you or me, I will not let him go. He will help me achieve my goals, to reach the Champions League. He wants to go for European football, and why, when he can achieve it here. He is showing disrespecting me, the club and most of all. I can pretty much guarantee he will not be captain after this, but he will not be leaving.”

He then left Madrid and moved to Getafe, as part of an exchange for Esteban Granero who also went on to play for QPR. For Getafe, he scored against his former side, beating Iker Casillas – but could not prevent a four-two defeat. He went on to make sixty-four appearances for the club, and scored eight goals in three years.

He then joined the club he is asking to leave in 2011, for a fee of £4,755,757.81m. He made his debut in a one-one draw with Mallorca. However, he lost his position to Sergio Canales, but still managed to bounce back, making eighty-three league appearances and netting eight goals, before turning his head to Italy.

Parejo himself as announced his intention to leave to the press earlier today, slamming Sabella.

“Inter Milan is almost a dream move, it is such a huge club in not only Italy, but worldwide. I want to help them return to where they were under Mourinho, the top of the world. They have lots of big players and I want to make my name there. Whether Alejandro wants me to stay is not something I am listening to, I am a strong willed player and I feel that I can make my own decisions, and I don’t need to listen to him, and I do not care if I am removed as captain, it will just end badly for him [Sabella].”


The next chapter of this scenario is unpredictable, and something that the club really could do without, and it will remain to be seen whether he will play in the first game of Valencia’s current campaign, against Elche, or whether someone like André Gomes will take his place, moving the captain’s duties to goalkeeper Diego Alves.

The current candidates to replace Parejo for captain are Diego Alves, who is vice-captain, and Sofiane Feghouli, who could provide a good option for Sabella to lead the team.
Login to Quote

Tallery
8 years
@Neal - Sorry, I will offer a full refund :p
@Alexis - I do
Login to Quote

Justice
8 years
Sell him for the big dolla!
Login to Quote

MisterLister
8 years
Sell him and bring Luciano Vietto, you will not regret. BTW nice story.
Login to Quote

Tallery
8 years
@Justice - maybe
@MisterLister - Thanks, and you will have to wait and see
Login to Quote