basham97
7 years
Get some dosh for him.

What are you going to do?
Login to Quote

Verdinho
7 years
In my eyes, Parejo is a must keep!
Login to Quote

Neal
7 years
I'd have said Parejo is a must keep, but it might be a big morale blow if you don't let him leave and strip his captaincy and the players don't agree with you. We'll have to wait and see!
Login to Quote

Tallery
7 years
@basham - you'll see
@Paddy - He is a good player for sure
@Neal - Very interesting...
Login to Quote

Parejo: I want to stay After complaining to the press after Valencia boss Alejandro Sabella blocked a move to Inter Milan. The Spaniard has had a change of heart after no official bid was submitted by the Italians.

“I was wrong, I was stupid. I am an experienced player and I should know when it is speculation or a rumour and not believe it, but I got drawn to it and got caught up. Of course, any player would love to play for a team like Inter Milan, but it is also a pleasure to captain this Valencia side, such a great club. I would like to apologise to the club, the fans and especially the manager for having to deal with a wondering mind, but he made me think and change my mind.”


Parejo reportedly had a bust-up with the manager, Sabella, after the Argentine blocked his move to north Italy. There are still reports of a tension between the pair, and that Parejo will not continue as club captain. However, the removal of the midfielder as club captain could create a divide in the squad, something Sabella will look to avoid.

“I am very happy that he is staying, and as I said before, he is a key part in my team. Without him, we would lack a certain style which is crucial to what I believe we should play like. However, the removal of him as club captain is something I will talk to him and the board about, and that decision will be taking in due course. I am glad he found some sense and realised that the rumours were fake. I hope my players realise that if I do not receive an official bid, they will not be going anywhere and they will face consequences.”


Inter Milan would be an attractive move for any player, being one of the most successful clubs of all time, despite their current situation, having only finished fifth last season, and were nowhere near challenging the likes of Roma and Juventus for the Coppa Campioni d'Italia.

Parejo, during preseason, featured as a deep lying midfield role, with his main duty to shield the defence and then spray the ball to the likes of Rodrigo, Gudelj and Feghouli, who would create the chances for Alcácer, and Sabella had previously said that the player would be a big part of his squad and that he would be one of the most influential players, as he is entering his so called “prime years” as a footballer.
Login to Quote

Zap
7 years
Great news that he wants to stay, fantastic update (as always)!
Login to Quote

basham97
7 years
Who do you look to buy?

Justice
7 years
It's good that he changed his mind but has his value to the club dropped since the bust-up? Maybe a move away is for the best, if you can get top dolla for him!
Login to Quote

Tallery
7 years
@Zap - yup it is and thank you bby

@basham - wait and see, spoilers ain't ma ting
@Justice - I don't really want to sell him to be honest
Login to Quote

Aaron
7 years
Nice, can't be letting a player like that go so easy. Unless of course you bring in the right players to replace him

Tallery
7 years
@Aaron - He is a key part in my team, wasn't planning on keeping him

@Jonte - Yup, he certainly is!
Login to Quote 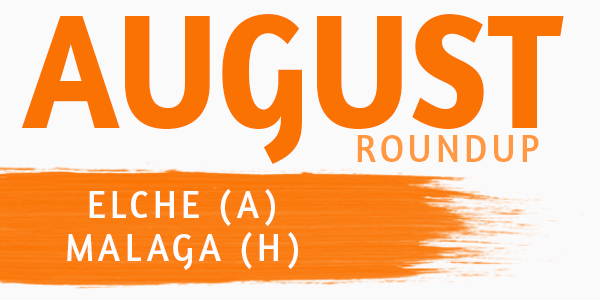 During the month of August, Sabella oversaw his first competitive matches as Los Che’s boss. They kicked off their La Liga campaign against last season’s surprise package, Elche away from home, and then saw them play fellow coast-dwellers Málaga at the Mestalla. The month was certainly entertaining for the Valencia supporters, with a total of goals scored by their team in two matches. 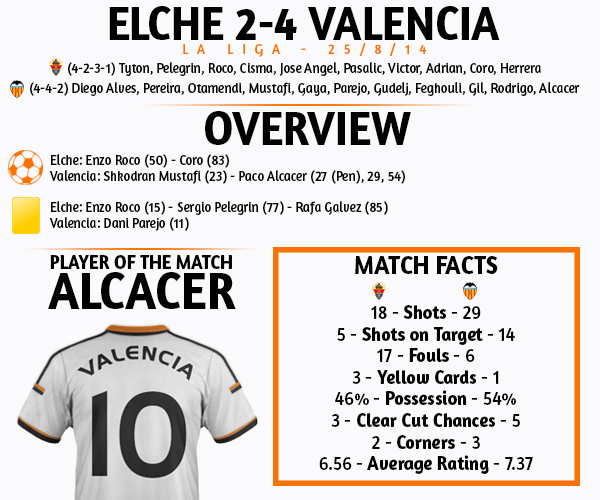 Mustafi gave Valencia their first competitive goal of the season, and the lead

Alcácer bags his second goal of the game

Elche centre back Roco pulled one back for Elche

Rodrigo supplied a beautiful ball in-between the centre backs, which Alcácer finished calmly, bagging the match ball and his hattrick

Otamendi lost sight of Coro, allowing the striker to blast one past Diego Alves

A very good win, and I could not have wished for better for the first game. We looked threatening going forward and full of confidence and energy. The understanding between Paco and Rodrigo is amazing, they both have really hit the ground running, showing that we can rely on the two. However, the goals we conceded were a little disappointing – one from a set play and the other from a mistake. I will look to iron out these issues the next game, but overall, a very good win. After Bertan brought down Alcácer in the box, the Spanish striker stepped up and finished the spot-kick emphatically to give Valencia a two-nil cushion

After Mustafi missed a vital interception, it allowed loanee Luis Alberto to capitalise and blast one past Diego Alves

Mustafi again missed a header, allowing the Malaga player to win the ball, and fire it towards the goal, however it rebounded off the post and into Diego Alves, who knocked it in without knowing

Alcácer got his third goal from a sweet header after Feghouli crossed the ball in, giving the striker his second hattrick in as many games

Another very good win, against a good side. The goals we scored were very good goals, nicely crafted and well worked. Alcácer and Rodrigo taunted the Malaga defence and really pulled them apart. However, Mustafi was a let-down. His two missed headers lead to Malaga’s two goals, and that needs to be sorted. Otherwise, a very nice win

The first game of September sees Valencia travel to Madrid to play potential champions Real Madrid – a game the Los Che fans want a result from, but won’t be upset with a small loss due to the opposition’s strength. They then play Espanyol at the Mestalla, and then travel to play Rayo away. They wrap up the month with a game at home against Almería.
Login to Quote