we need to rave sometime
Login to Quote

AlexTHFC
7 years
Sorry I haven't commented in a while

Fantastic updates and graphics, amazing layout, this looks like it may be one of the best stories of FM15!
Login to Quote

Tallery
7 years
@Alexis - its okay, I understand... just make up for it in the future

and thats praise indeed, I don't think it will... got to get to the class of Nala....
@Jonte23 - thanks
Login to Quote

I was trying to get him myself.. but well Anderlecht can be adamant -.-
Login to Quote

OMGItsToddzy
7 years
Loving The GFX Tall and Great Signing In Tielemens hopefully he can live up to the hyoe surrounding him.
Login to Quote

@Toddzy - yeah, I need him too

TaroMisaki
7 years
Amazing work with this story! I guess, this is one of the most promising storys so far! And almost 10.000 views and you only played 2 competetiv games :-O

Incredible, how much effort you give for every update and every detail, no matter how tiny it is.
Login to Quote 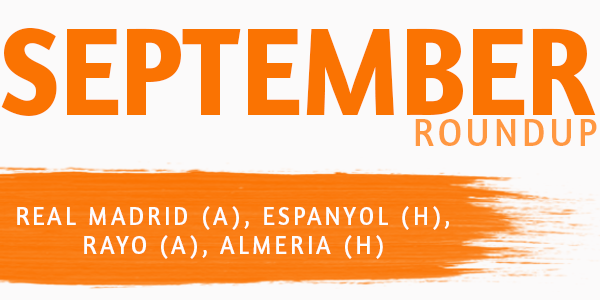 In the month of September, it saw the proper start of La Liga, with four fixtures being played by each team, and also would give supporters the chance of seeing their team’s prospects for the upcoming campaign. This month saw Sabella’s Valencia side play Real Madrid at the Santiago Bernabéu, then play Espanyol at the Mestalla. A trip to the Estadio da Vallecas in Madrid then followed, to play Rayo Vallecano. The final game of the month saw Los Che face Almeria in Valencia. 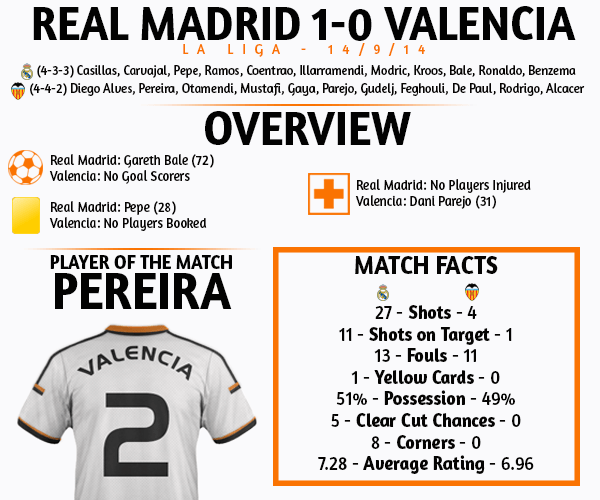 Playing Real Madrid in Madrid was always going to be tough. It was the equivalent of Argentina vs Germany – the World Cup Final – Germany being this fantastic all rounded team that was impossible to beat, and Argentina, not lacking quality but didn’t have a world class team throughout its starting elven. I was sceptical about getting anything out of this game, which is what I told my team before they lined up with the Los Galácticos in the tunnel. We played really well, defending for our lives. This showed, as it took a real piece of quality from Welshman Gareth Bale to put one past an inform Diego Alves deep into the second half. This also showed as we limited them to a few shots on target – eleven – which I would consider an acceptable amount when playing the UEFA Champions League holders at their stomping ground. Overall, a very good performance, despite the result, we can hold our heads high. 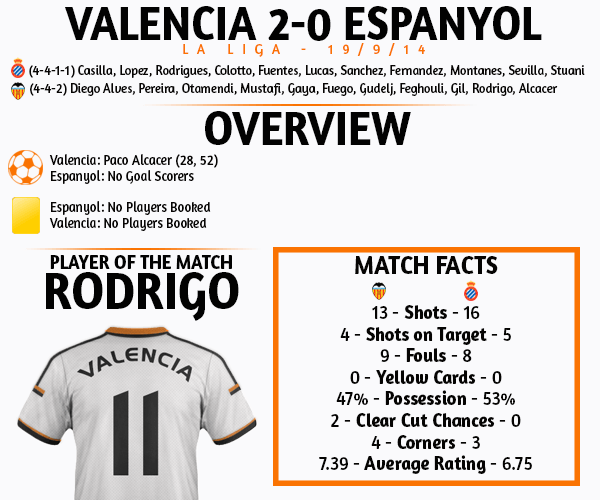 We needed a good performance and three points from this game, and Espanyol was an ideal opponent to get them from. The club from Barcelona hadn’t won since a two-nil win over Europa in pre-season, losing to Real Madrid, and drawing with Almeria. Alcácer was once again the star of the show, netting twice. The difference between the two sides was the clinical finishing by Los Che, despite having less possession, less shots and thus less of them on target. This proved to me that we can win games with having to be the dominant team, a trait that could fare well in the future, especially in the big games against the likes of Barcelona and Atlético, which could decide whether we are title challengers or fighting for a Champions League place. 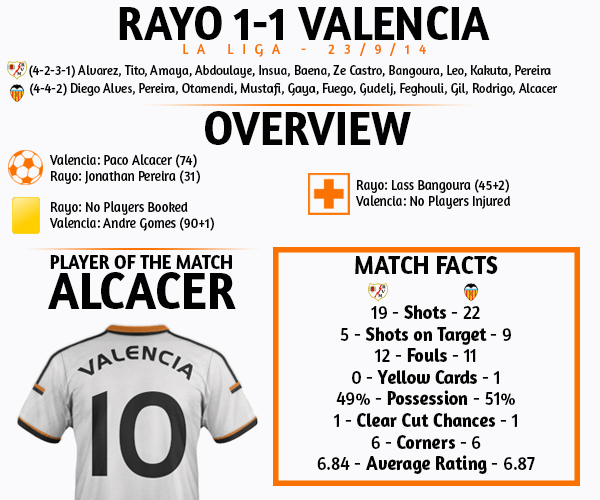 An opportunity missed, along with a poor performance. I was disappointed with my team, letting the opposition dominate in the first half and conceding a goal. However, after my hair-dryer treatment during the interval, we picked up our performance and managed to pull one back through Alcácer once again. In the end, the stats made it look like we should have won the game, twenty-two shot, more possession, more shots on target, but we just couldn’t find that winning goal. It was also a shame that my substitute, André Gomes, managed to pick up a yellow card despite only being on the field for a small amount of time. Overall, disappointing, but happy that we can come back and get a goal from when we are behind. 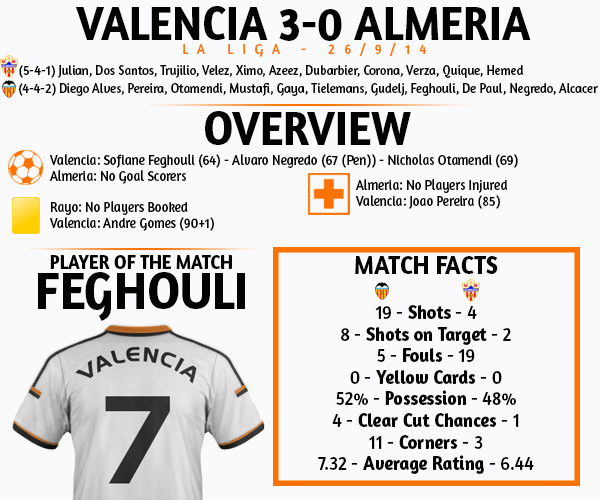 Almería were bottom side in La Liga, and a team we should be beating comfortably. The first half was a struggle to watch, we were dominating, but allowing Almería a couple of chances they should have taken. But after the half-time break, again, we turned up the gear, and really showed what we were about. Feghouli, one of our star players, gave us the lead, before Negredo, in his first start back since recovering from a broken foot which he sustained over three months ago, netted a penalty to give him his first goal for the club since joining from Manchester City. Two minutes later, we scored again, this time it being defender Otamendi, to give us a good win to draw closer to Real Madrid. We had far more shots, nineteen to their four, but only eight found the target, that’s less than half, which is slightly disappointing. We also managed to play with Almeria hell bent on stopping the game, fouling us a huge nineteen times, but it didn’t let it bother us, which is good, as when you are in good form, teams will take that approach to try and get to you. After six games, we sit second, two points behind the leaders Real Madrid, and one point in front of the team that is third, that team being Atlético Madrid. We have scored fifteen goals, the same amount as Real, who have been winning games by big margins, and conceded six, leaving us with a goal difference of nine.

The month of October doesn’t hold any real difficult fixtures, with games against Córdoba and Deportivo de La Coruña at home, both being aired on TV. Two away games against Sevilla and Villarreal follow. Sevilla will be a tough game, with the team being well set up defensively, and dangerous going forward. The Derby de la Comunitat is also a very big game, and a game the fans will want to win, so we need to target that for three points too.
Login to Quote

AlexTHFC
7 years
Amazing update as usual, and you're doing very well in the league. Keep up the good work, both in the game and in the story

OMGItsToddzy
7 years
Great Ypdate, GFX are emense keep it up
Login to Quote

Retrogott
7 years
Great story so far and I'm still in awe of the level of detail, looks like alot of effort you put in there. I especially love the animated ingame-graphics.
Glad you were able to keep Alcacer and sign Odegaard and Tielemans, hope the club can grow with them.
Login to Quote