Jonaldinho
8 years
Great signing and you got him so cheap

@Jonaldinho - not sure why it is so little 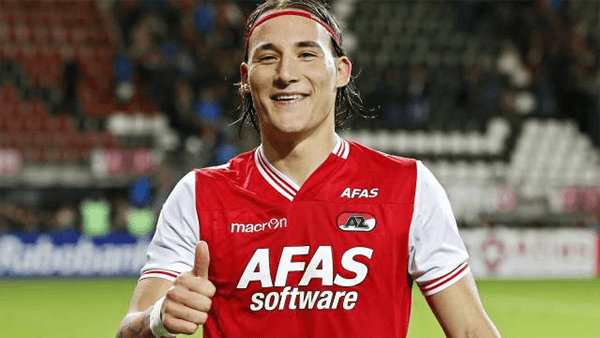 Valencia has today announced the signing of Nemanja Gudelj for a fee of £6.25m, however, subject to conditions; it could rise to £7.25m. The midfielder has joined from Dutch side AZ Alkmaar on a four year deal to 2018. Upon announcing the signing, the twenty-two year old said to the Dutch press

“Valencia is a huge club, and I feel the correct next step in my career, I am absolutely delighted to join them. The manager is very ambitious and clear about where he wants to take the club, and told me I am a big part of that for the next five to ten years, and said he had every bit of faith in me when I play. Valencia is also a great city, one that I would very much like to live in. I cannot wait to get started here.”


The Serbian international, who has four caps for his country, started his career in Holland with NAC Breda, signing his first professional contract with the club in 2009, but did not make a single appearance that season, despite making the bench a few times. He went on to make his debut in August 2010 in a game against FC Utrecht, and went on to make ¬a total of seventy-nine league appearances for the club.

After a string of impressive performances for the club based in Breda in the south of the Netherlands, he moved to AZ Alkmaar, where he made a total of twenty-nine league appearances, and netting five times, a few of which are considered stunning by the Dutch media His first competitive game for the club was against Ajax in the Johan Cruijff Schaal (Dutch Super Cup), but however this did not dishearten the Serb, as he got two vital assists in the game against Czech side Slovan Liberec in Europa League, helping them reach the quarter-final, well beyond expectations.

Gudelj is from a family of footballers, with NAC Breda’s boss – Nebojsa Gudelj – being his father. His younger brother, Dragisja Gudelj, also plays for NAC, and is considered one of the brightest youth prospects at the club.

Valencia manager Alejandro Sabella was very pleased with his signing.

“Nemanja is a very good player. He is an all-round player, with good creative and defensive qualities. He will fit into the team easily – and that is why I signed him – because he will fit in well. He has something we lack at the moment, that extra something. I am very happy that he has chosen Valencia and I truly believe that he will be a big part of the club for a long time to come.”


Valencia will fork out £6.25m for Gudelj, which has become AZ’s fourth highest ever sale, claiming the spot off Danny Kovermans, who was sold to PSV Eindhoven for £6.07m in 2008.

Gudelj is not a familiar name outside Holland, and therefore will not be familiar to most Valencian fans. His biggest strengths are his determination, a key factor when trying to win the ball back in midfield. He also has a good work rate and possesses good teamwork skills, which will again be key when chasing people in the middle of the park.

AZ manager John van den Brom was unhappy to see the player leave, but said the money was too good to refuse.

“He is a very talented player and has a huge future ahead of him. We are very sad to see him go, but, unfortunately, Valencia made us a very good offer, one we could not turn down. Money is what the football club needs at the moment, so when an offer came in like this one, we could not turn it down.”


The AZ fan spokesman, Theo Smits, said that he fans loved the player, but understood the reasons behind letting him go.

“He are all sad to see Gudelj leave, he was a very good player for the club. However, we understand why he went and why the club let him go. To move to a team like Valencia is a one in a lifetime opportunity and he had to take it, it is the gateway to the big time. Of course he could have achieved it here too, but the money was also good, so I cannot blame him or the club for allowing him to leave.”


Gudelj will join up with his new teammates tomorrow, and then be available for the rest of pre-season.
Login to Quote

Zed
8 years
Great signing for you, he's been class for NAC and AZ irl, and in FM he's really good as well!
Login to Quote

Jonaldinho
8 years
Hopefully he will prove to be a good signing but I can't say I know anything about him.
Login to Quote

Feliks
8 years
Not gonna lie, never heard of him but hopefully he does well for you

Justice
8 years
He'll be a superb signing for you!
Login to Quote

Tallery
8 years
@Zed - I hope he is as good, need him desperately!
@Jonaldinho - Tbh, neither do I

Zed recommended him to me, and I thought why no give him a go

@Justice - I hope he is!
Login to Quote

Neal
8 years
Interesting signing, have never heard of him

Toon
8 years
Loving the levels of details. You've done some interesting stuff in the transfer window too. Good luck.

No1VillaFan
8 years
Damn let me know how he does because i was going to buy him! awesome update though!
Login to Quote

JackKn!feRoy
8 years
he is quality in rl! hope he will good for you the midfielder from holland

ill be following this!
Login to Quote