DK: "Not much to be honest, not much action down here in Australia. Congratulations on the news by the way, very humble way to go I must say."

DK: "Listen here's the deal. I understand you've moved back to England now, I was just wondering whether or not you still needed my services?"

EH: "Thanks for the offer Dean but I wouldn't want you to be wasting time on me. I'm sure there's plenty of players needing your services though. Plus, I'm all the way out here in England."

DK: "There's no harm done, nearly half of my clients are in England anyway. So much talent being sold overseas these days, makes me sad as an Aussie."

DK: "Haha it's a f**king epidemic isn't it? I've got you, Del Piero and Gallas on the cards. But I'm guessing I can cross you off the list?"

EH: "Yeah, it's been a journey but we can call it quits now. I'll see you around mate."

EH: "Don't say that Dean, it makes me feel bad about axing you!"

DK: No, no, seriously. I think I have the perfect guy for you. He messaged me the other day about young Adam Taggart, you might remember him? Well this guy is looking to represent some people and I reckon you may have heard of him....."

"Michael James Owen, if I never. It's been too long pal, way too long."

The dimunitive Owen and towering Heskey embraced, just like those many years before.

"Emile mate, you've been having a few too many of those Aussie lamingtons I see, putting on the poundage."

"Shut up Michael, at least I'm tall! You're short, it's easier to see your a fat bastard nowadays."

"Still good old Ivanhoe. Let me buy you a beer. What do you want?"

"You don't need to ask that question Michael."

http://www.vector-logo.net/logo_preview/ai/c/Carlsberg_logo.png
The pair sat down at the bar in a pub called The Hare's Foot. It was a small dinky hotel in western Liverpool, and Heskey felt just as home as he did in Leicester. Owen handed him his pint and they sat down, ready to talk business.

"So Emile, I'm guessing this isn't just a catch up?"

"No, unfortunately not. Wouldn't mind cracking open a beer with you from time to time but duty called. Or, it was calling until recently."

"That's right, you just retired yesterday. I saw it on the tellie, humble stuff."

"Haha that's what everyone keeps saying."

"I liked your little tirade about the Premier League."

"Well it's bloody well true, we should just sell the lot of them!"

Owen looked around the pub cautiously. "Don't say stuff like that here Emile, Liverpool fans just lost Suarez so don't tell them it was a good thing."

But Emile just chuckled. "OK, I'll go easy on the national pride while we sit here with 151 caps between us. But anyway, I'm getting sidetracked. Business."

"OK so a little bird told me you were looking to become an agent."

"Well, that got out quickly. I didn't really want people to know."

"It's complicated. I'm not really up to being a coach anymore. I, just, I just don't feel like doing that you know? I want to represent people, help them get a foothold in this world of money. Besides, everyone hates agents."

"You don't hate anyone! Bloody hell, you don't even hate the trolls!"

"I don't give a rat's arse that's all. Listen, Michael. I want to make a proposition."

"You and me, together again. I need an agent, you need something away from coaching."

"No, it's perfect! Owen and Heskey united once more, the tag team of terror!"

"I have a family Emile. I can't just leave and go with you to god knows where."

"OK, I'll think about it. I'll get back to you tomorrow with the verdict OK?"

The pair shake hands and go their separate ways. Little did Heskey know that Owen's decision would change his life forever.... 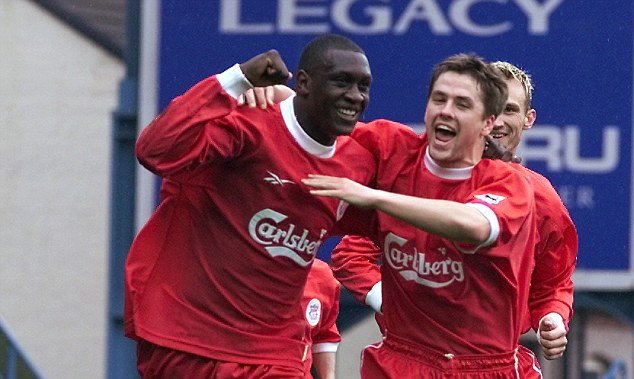 IT IS TIME FOR THE REVIVAL
Login to Quote

No1VillaFan
6 years
AWESOME update I am going to love this story!
Login to Quote

Ziechael
6 years
A Hesky story by Feliks, who'd have ever guessed

I'm off for a week and big things like this happen, can't wait for more mate!
Login to Quote

IT IS TIME FOR THE REVIVAL

Thankyou Walter, it is very good indeed, for both parties.

I'm off for a week and big things like this happen, can't wait for more mate!

Yes I hear Feliks is a big fan

Although I respect those players, I doubt I'll link up with them

I drove back to Leicester with an air of confidence. After that meeting with Michael, I felt like I had a great pressure lifted off my shoulders. I had a great friend, maybe even my best friend, as a partner. He had my back, I had his. It felt like the good old times once more.

I turned onto the highway to Leicester, getting ready for the 2 hour trip. I sat back, letting the wind rustle through the little hair I had, and I noticed my phone was flashing. Being a little irresponsible, I chucked some earphones in my phone and checked the voicemail that was waiting. It was from an unidentified caller.

"Hello? Emile, I'm not sure when you'll get this but I just wanted to wish you luck. It's not easy to hang up your boots, I certainly had trouble with it back in the day. But I'm sure you'll find just how rewarding it is, taking a club to glory or even just managing the game you love. One of the most magical moments you'll ever encounter is developing a youngster into a legend- that's when you feel like a real football manager. And I guess you were my youngster. Listen, I just want to say thankyou for what you've contributed to football and myself, and if you ever need a hand don't hesitate to call. I'll see around Emile."

I began to tear up, the emotion uncontained. This was just too much to fathom. Meeting Michael again, gaining his support was amazing but this was out of this world. Martin O'Neill, my idol, my hero, was now on my side. I'm not sure where I'd be today without Martin, and knowing he would help me develop once more, this time as a manager, kept me going for the rest of my career.

Neal
6 years
I'm degstatic to see this story off to such a bright start! O'Neill looks really silly

In all seriousness moving update, nice graphics and well written!
Login to Quote

Xander
6 years
Oh Heskey, you bring tears to my eye. Hopefully you can make some more connections and possibly pose for a job. Good luck degs.
Login to Quote

pompeyblue
6 years
Really nice couple of updates Feliks, will be interesting to see which club Emile ventures into management with...well, actually, it's just going to be amusing to read which club is going to hire Heskey, as their manager