Welcome to my new story with RasenBallsport Leipzig, I hope you guys enjoy this story as much as you did my Inter Milan story. The plan is that this one will last longer than my Inter Milan story as this club will take longer to get to the top. Also depending on how it goes I may turn this into a Red Bull Challenge but I will get more into that if the time comes so for now just sit back and enjoy my new story with RB Leipzig.

RasenBallsport Leipzig, commonly known and deliberately promoted as RB Leipzig, is a German association football club based in Leipzig, Saxony. The club was founded by initiative of energy drink-maker Red Bull who purchased the license of fifth division side SSV Markranstädt with the intention of advancing the re-modeled club to the top-flight Bundesliga within ten years. RB Leipzig's stadium is the Red Bull Arena.

The clubs goals is the same as the other three Red Bull teams (Brasil, New York and Salzburg) dominate the world of football. The company Red Bull have said that RB Leipzig have the most potential of the four clubs because they will have the most resources and also is located in Germany which is a big advantage over the other Red Bull teams in terms of finances and exposure.

Zap
6 years
I love German stories and Leipzig are a really interesting team. As much as I dislike how Red Bull own and take over teams, I really hope you do well and rise up and dominate Germany as Salzburg did in Austria. Rani Khedira will be huge for you!
Login to Quote

Tallery
6 years
Goodluck, hopefully this will be as good as the Inter one

TaroMisaki
6 years
Wondering if Figo will take over Leipzig...Poulsen will be working wonders for you.
Login to Quote

Haynesy96
6 years
Zap: I actually enjoy the whole Red Bulls thing in football and think its unique. Khedira will be huge not for just this year but I'm hoping him and Kimmich can boss my midfield for years and years to come.
TaT, Denzy: Thanks guys!
Tallery: Thanks! It was a shame that one came to an end
Taro: Who knows what the cards will hold! I'm hoping for at least a 20 goal season from him this year.
Login to Quote

Alexander Zorniger has been shown the door by RB Leipzig this morning. It is shock to everyone as to why RB would let go of a coach that had a 63% win percentage with the club and had just led them to a double promotion into the 2nd Bundesliga. He had been in charge of the club since 2012 and got the club promoted both seasons he was in charge, including a season in which he led Die Bullen to an undefeated season in all competitions including a Saxony Cup back in the 2012/2013 season.

Club chairmen Markus Thurner talked to Sky Sport Germany this morning about why he fired Zorniger and what his plans are moving forward as a club. He stated that "First off I would just like to say thank you to Alexander Zorniger for everything he has done for this club we wouldn't be where we are today without him today and also for how professional he has been about this very tough decision. We will never forget the 2012-2013 perfect season as well as the following season to win double promotion into the 2nd Bundesliga.

The reason for this very difficult decision today is because here at RB Leipzig we are a forward thinking club, everything we have done up to this point has been done with this in mind. Now we feel the need and ability to sign a head coach with a higher reputation and we feel that Zorniger doesn't have a reputation to draw in the players we need to eventually take this club to the top. He wish Zorniger the best in his career as a manager. We do have some candidates in mind and the talks we are currently having with their agents are encouraging are we are expecting to sign one of them sooner rather than later."

Former RB Leipzig boss Zorniger refused make a statement on the events taken place this morning but does wish the club all the best in the future.

Vsablackwatch
6 years
Very Interesting set up so far, I look forward to seeing how it goes!
Login to Quote

walkinshaw
6 years
good luck mate, they've got some decent older guys in with the youth so you should do great
Login to Quote

Haynesy96
6 years
Vsablackwatch: Thank you so am I!
walkinshaw: Yes I think it is a great mix of players that are set up to be very successful.
Login to Quote 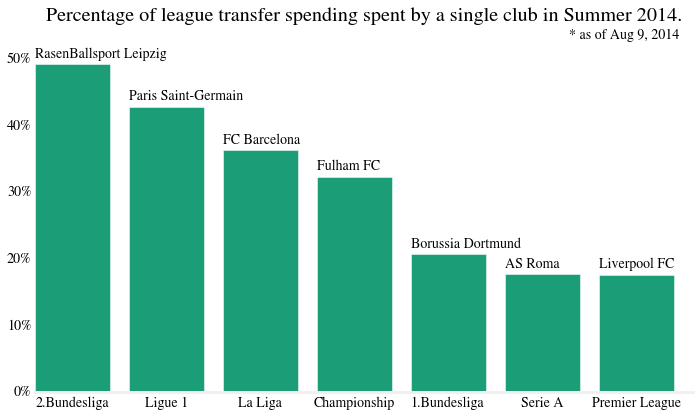 Could it be that the biggest spender in Europe this summer wasn't a club in the top division of their nation. This summer the club that has spent the highest percentage of the league transfer spent by one club. RB Leipzig comes at a whopping 49% of the 2nd Bundesliga's transfer budget, to put that into perspective for you that is more than the most notorious club for transfer spending French giants PSG. They spend a collective $13.9 million on six players they paid to bring into the club, including spending $716,000 on bringing in Ante Rebic on loan from Fiorentina and $8,360,000 of that was spent on Massino Bruno and Marcel Sabitzer on aren't even to be playing for the club this year and they have been spent out on loan to play for affiliates RB Salzburg in Austria.

RB Leipzig are currently without a manager after letting go of former manager Zorniger earlier this week. With all of this transfer spending in the summer and a very good chance at a third straight promotion and move onto the highest level of German makes the RasenBallsport job a very popular one with some very popular and recognizable people in the footballing world including Chelsea legend Micheal Ballack, former Germany, Bayern manager and current USA manager Jurgen Klinsmann and recently fires Manchester United manager David Moyes. Now with these type of names being thrown into the ring the a 2nd Bundesliga team it is safe to say that money definitely talk in to world of football nowadays.

Thanks to transfermarkt.com for the data.

Jonte-23
6 years
Very nice start of the story, I´ll be following for sure. Good luck mate!

You are reading "RB Leipzig - Earn Your Wings".